A short snorkel on a healthy tropical coral reefs gives you the opportunity to see more vertebrates in a shorter time than in any other ecosystem...

This is a general name for several groups that are not particularly closely related.

Many fish can and do change their colours throughout their life. Some fish, like this Tripletail Wrasse above, are capable of changing colours in just a few minutes.

This group includes the sharks and the rays.

These rays do have venomous spines on the tail and can sit motionless buried in shallow water.

Taeniura lymma, 'Blue-spotted Fantail Ray'. The longer common name is to distinguish this species from the many other rays with variations of blue spots; however, this is the common one most people see when snorkelling on coral reefs and is often just called the 'Blue-spotted Ray'. The blue spots are are a bright electric blue and usually easily seen, even in murkier water. To distinguish this species, the blue extends along the thicker 'ribbon'-like tail in a line. These rays follow the incoming tide in groups to feed at night around shallow sandy areas. By day when we see them, they are usually trying to sleep, and are noticed because they tend not to bury themselves in the sand as much as many other rays. They are found in shallow water through the tropical Ind0-Pacific 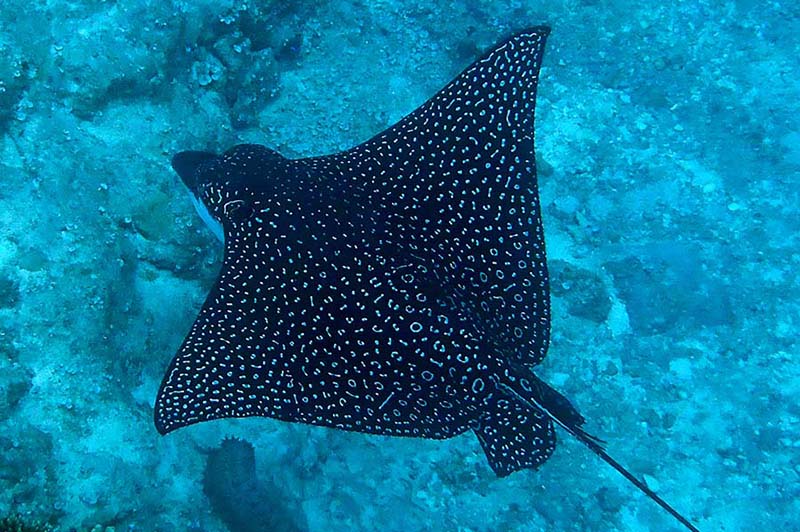 This is the largest group of vertebrates in the world.

Gymnothorax thyrsoideus, 'Black-faced Moray Eel'. This eel is reported to be found in shallow more turbid waters around coral reefs, including wrecks. Widespread through tropical Indo-Pacific. 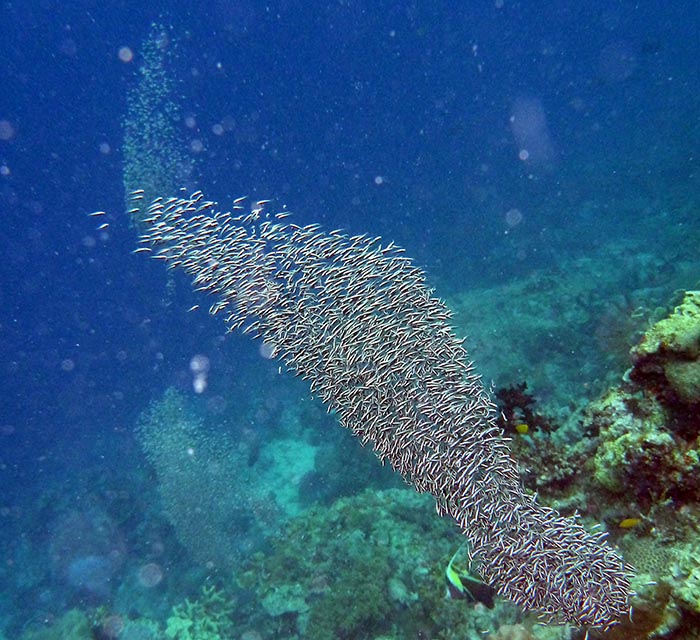 There are three species of Trumpetfish in this family.

Four species, the one below is commonly seen around tropical reefs in Indo-Pacific.

Fistularia commersonii, ‘Bluespotted Cornetfish'. Very widespread throughout the tropical Indo-Pacific, and has even snuck into the Mediterranean from the Red Sea through the opening of the Suez Canal (probably because it so skinny). 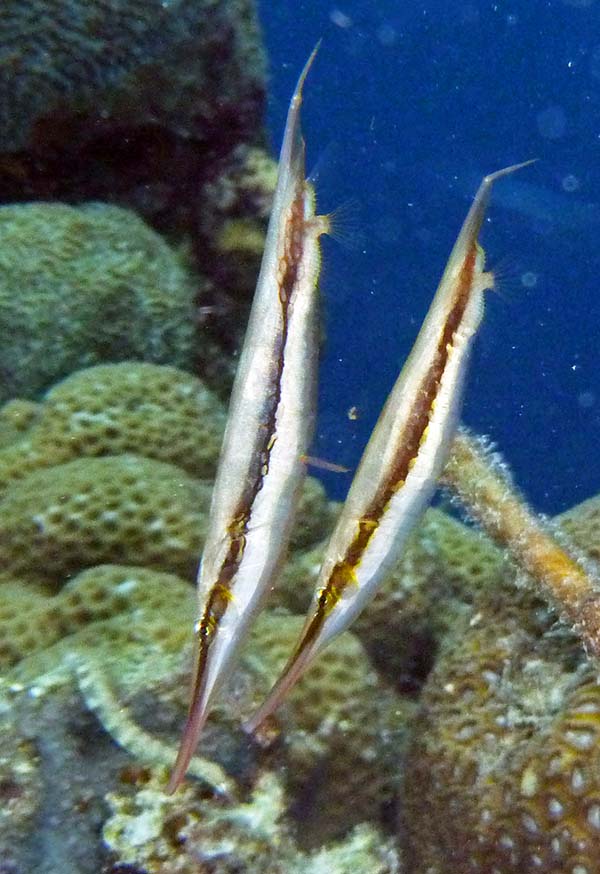 Aeoliscus strigatus, 'Razorfish'. These distinctive fish have the unusual habit of hanging in the water upside down. While hunting or hiding they may adopt this position within the spines of Sea-Urchins or within Staghorn Coral.

This family includes several dangerous species, including the "handsome, but deadly" lionfish and ugly, but still dangerous, stonefish 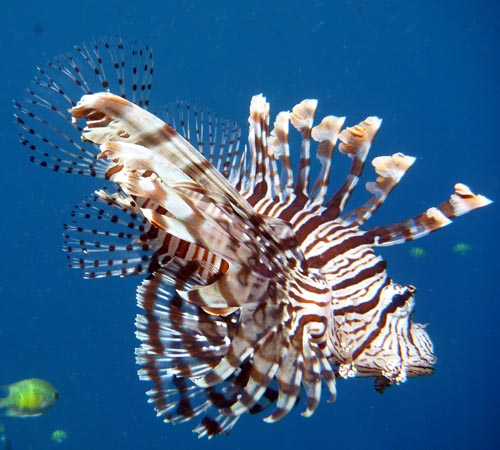 The striking colours and stripes are considered warning signs, and indeed when one approaches these fish they don't swim quickly away, but just turn at an angle and spread their fins out. They are covered in a total of 18 poisonous spines. These defences can cause many symptoms in humans, including pain and vomiting, and in extreme cases paralysis and heart failure. Deaths in healthy adults are rare, but fatalities can occur with small children and the elderly. All dozen species are native to the coral reefs of the tropical Indo-Pacific, although two species P. volitans and P. miles has been introduced to other waters such as the Caribbean and Mediterranean, where they are considered pests, and much research is being conducted on them in these areas. 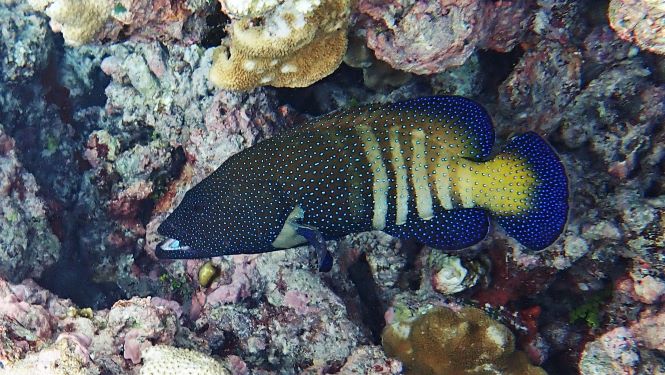 Plectropomus leopardus, 'Coral Trout', 'Leopard Coral Trout', 'Blue-dotted Coral Grouper'. Can grow to 120 cm, although it is usually smaller. It is well regarded as a fish to catch and eat. Found underneath coral ledges throughout tropical Asia and Australasia. 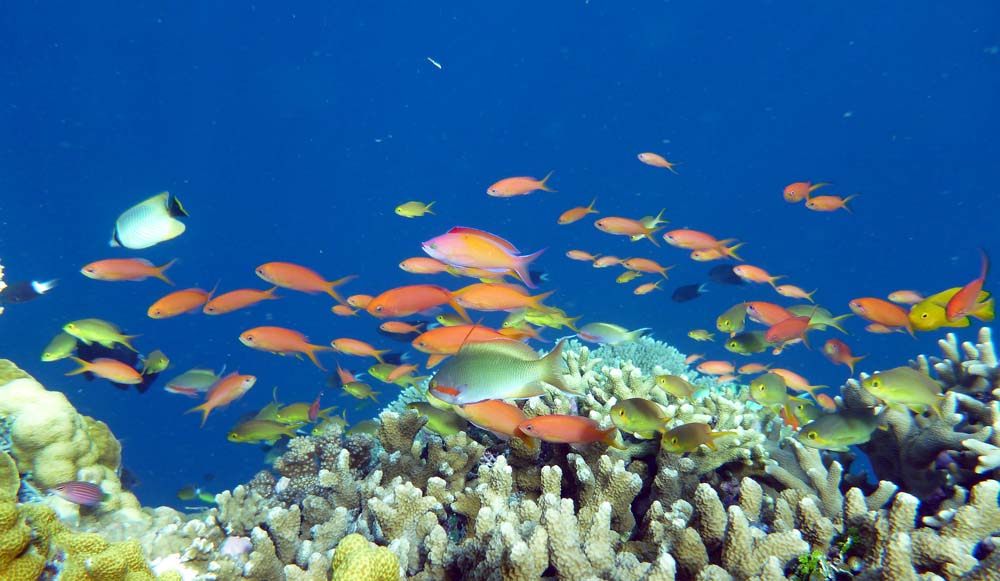 Anthias. This genus incudes some of the most delicately beautiful of coral reef fish. They are usually only seen on the drop offs and edges of fairly pristine coral reefs.

Cardinalfish are usually small, often colourful. Because they are nocturnal they appear to have large eyes. But their most distinctive habit is 'hanging' motionless; this is done above inside coral heads, near jetties or mangrove roots.

Includes the fast and predatory 'Trevally', known as 'Jacks' in the Americas. 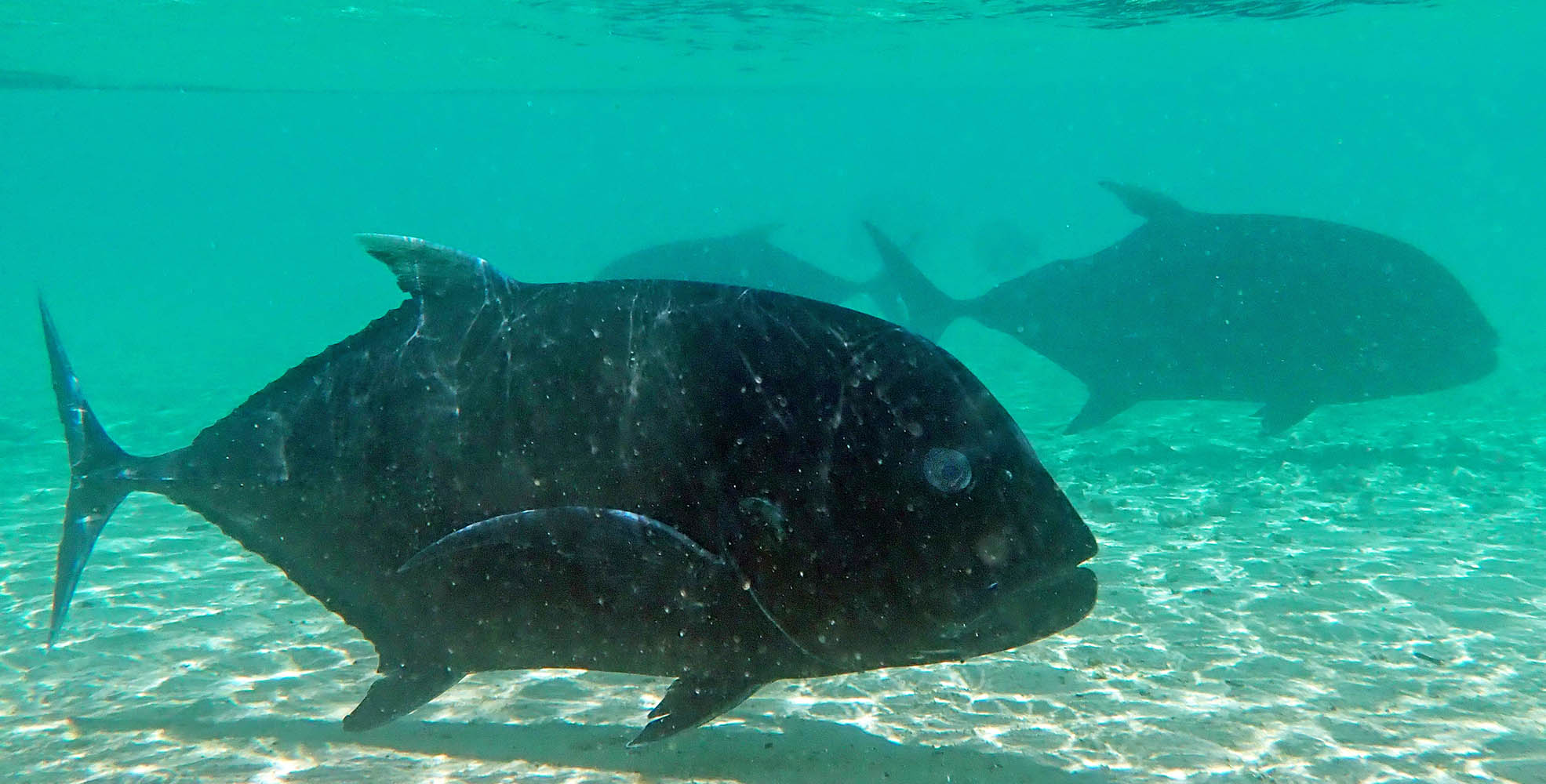 Gnathanodon speciosus, 'Golden Trevally', 'Barred Trevally', being serviced by Cleaner Wrasse. Despite the first common name, they are only bright yellow when young, retaining the colour on the tips of fins and tail as they mature. And despite the second common name, the bars also fade as they age. 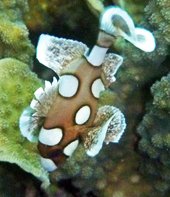 Plectorhinchus chaetodonoides, 'Many Spotted Sweetlips', 'Harlequin Sweetlips'. This is a juvenile pictured, and the juvenile of this species impersonates a toxic flatworm. 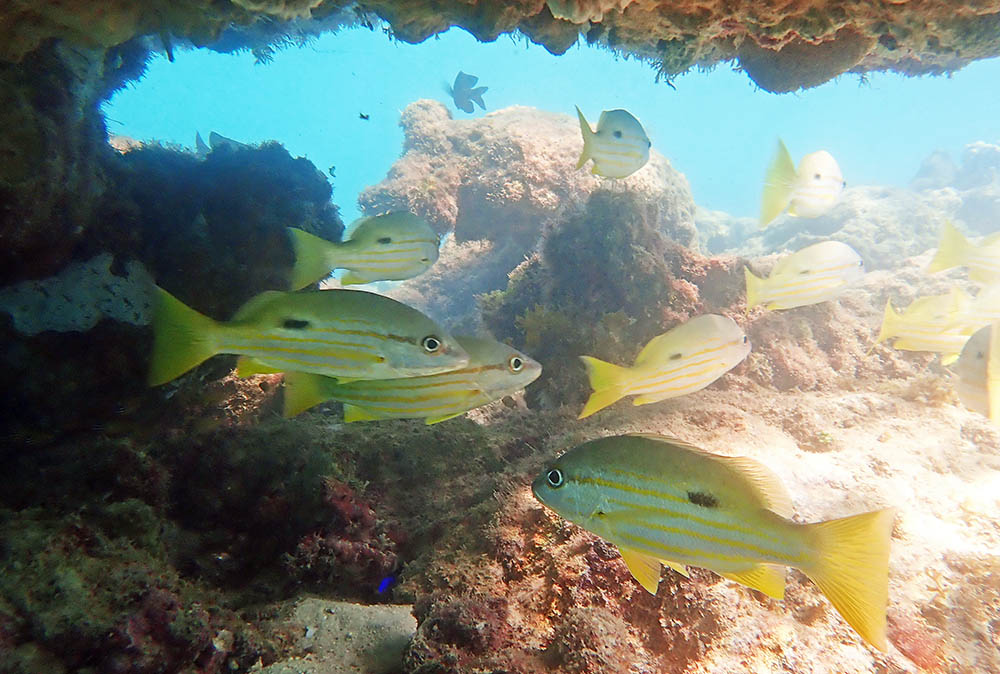 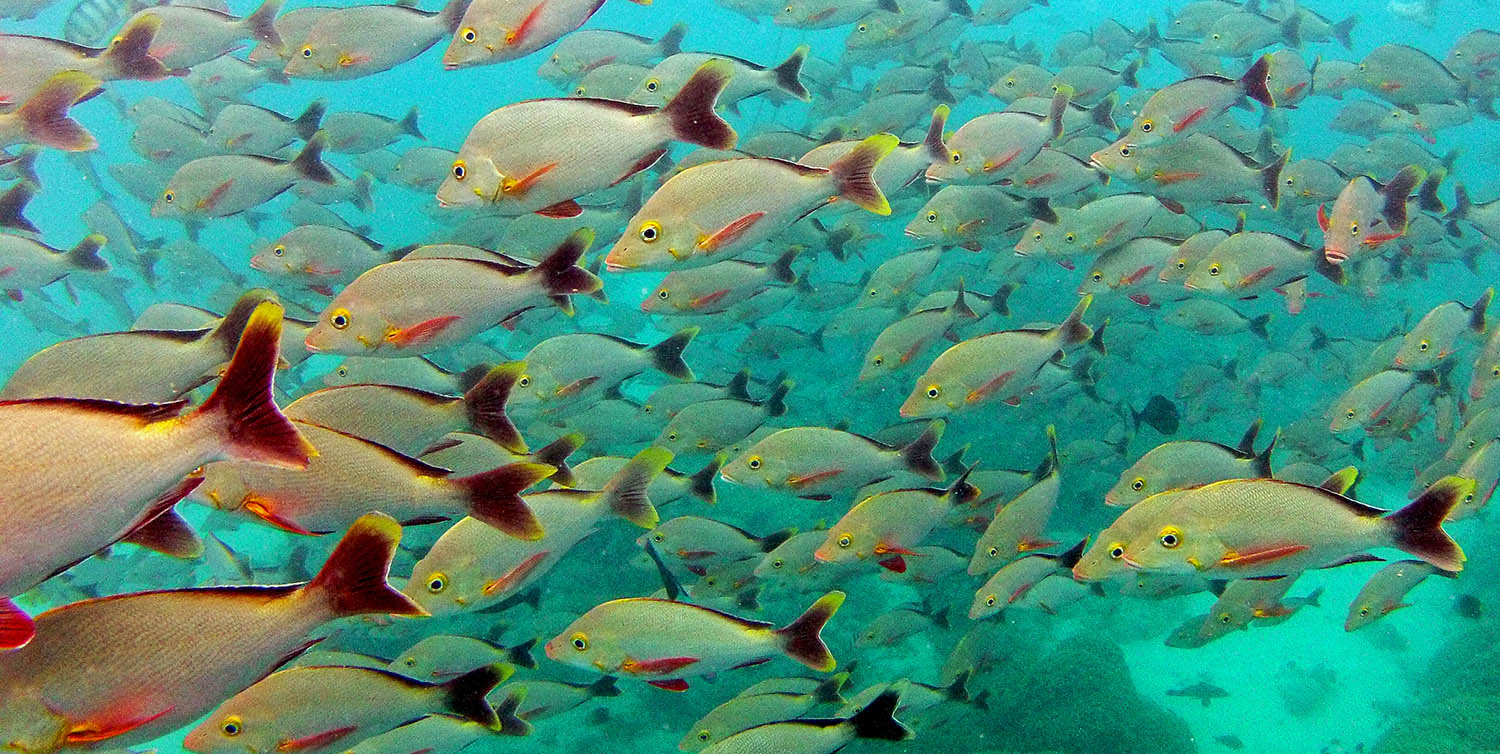 Sometimes considered a subfamily of the Snappers. Most species are blue, and hang out in schools feeding on plankton on the deeper edge of coral reefs

Goatfish have barbels that hang down from their 'chin'. 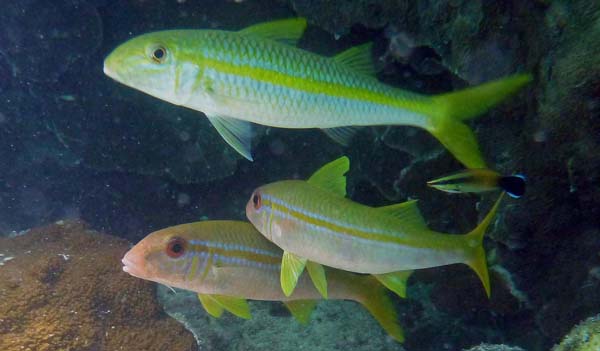 'Bullseye' or 'Bigeyes' are small and unusually shaped fish with huge eyes. They feed by night on zooplankton, then during the day they usually rest in schools underneath coral ledges.

Pempheris tominagai, 'African Silver Sweeper'?. Found in north-west Australia, western Indonesia, across Indian Ocean, Red Sea and to east African coast. (This is replaced by similar looking 'Silver Sweeper' Pempheris schwenkii along the rest of Australian coast, through Indonesia and to tropical Pacific).

For the page on Family Pomacentridae, 'Damselfish' including Anemonefish

Scarus scaber, 'Dusky-capped Parrotfish', 'Five-saddle Parrotfish'. Found between Indonesia across the Indian Ocean to the east coast of Africa.

Scarus spinus, 'Yellow/Green-headed Parrotfish'. As suggested by the name, often has a bright yellow or lime green head that contrast with rest of body. Main body has blue-edged scales. Found around coral reefs in south-east Asia and northern Australia. 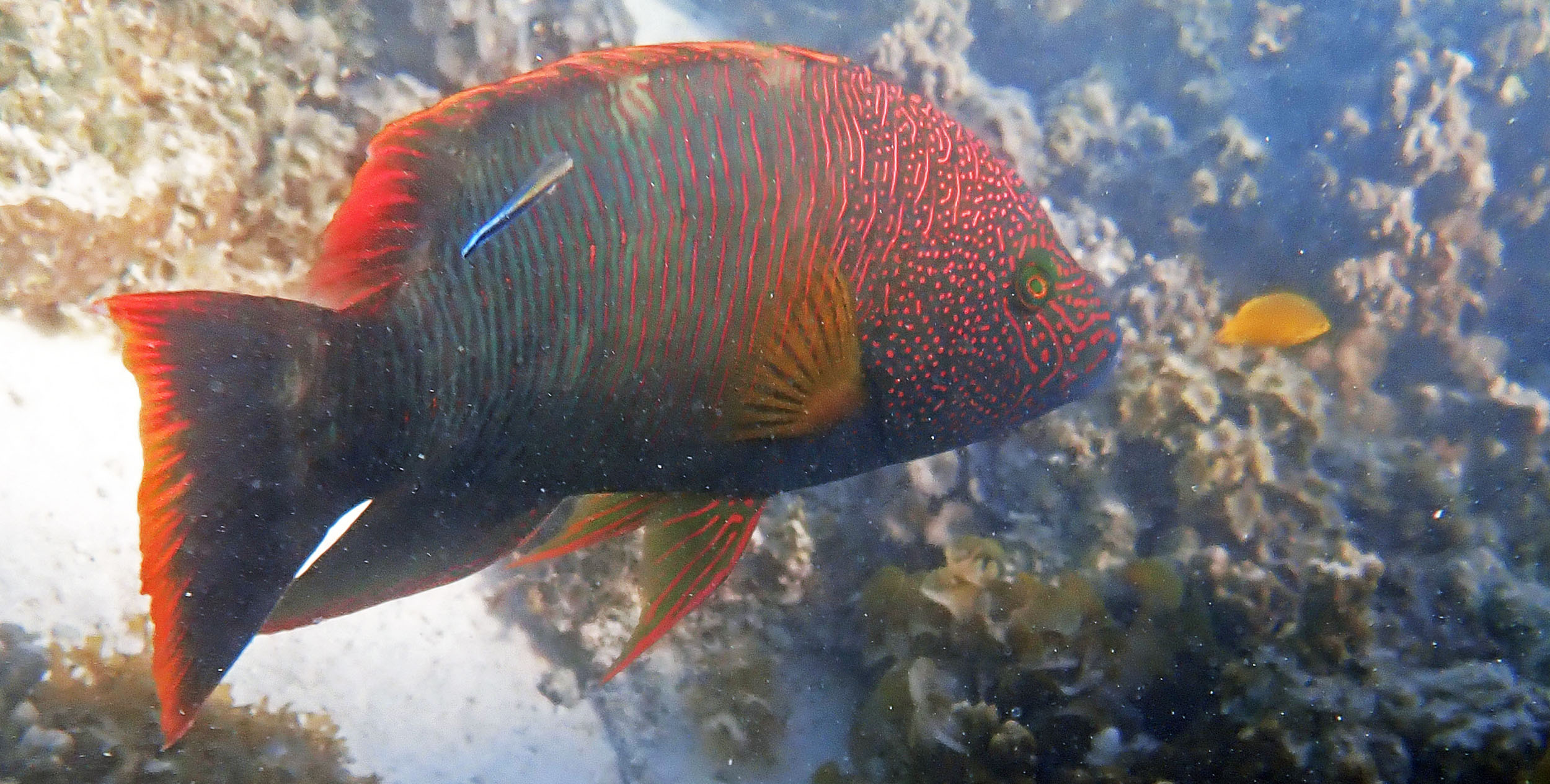 Thalassomma hardwicke, 'Six-Banded/Sixbar Wrasse'. This one of the more commonly seen wrasse on tropical coral reefs.

Thalasomma nigrofasciatum/jansenii, 'Black-barred/Jansen's Wrasse'. Two species of closely related Wrasse that look similar, and have recently been split. They seem to be more obvious in cooler water coral reefs. The latter species also occurs in Indian Ocean, while former does not, but both are recorded in the Pacific Ocean. Good luck trying to tell them apart. 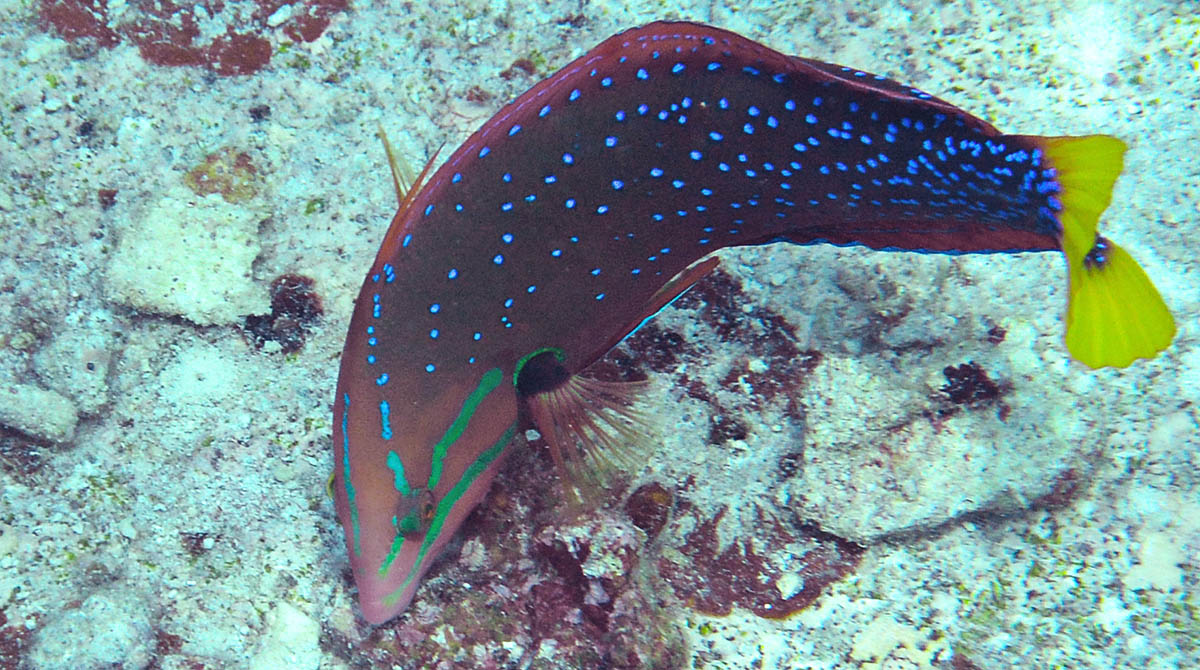 Epibulus insidiator,'Slingjaw Wrasse'. Often noticed when it extends it's mouth, as it has the most extensive protrusible mouth of any fish.

This small group includes four species of cigar shaped and sized fish that specialise in feeding on the ectoparasites of other fish. 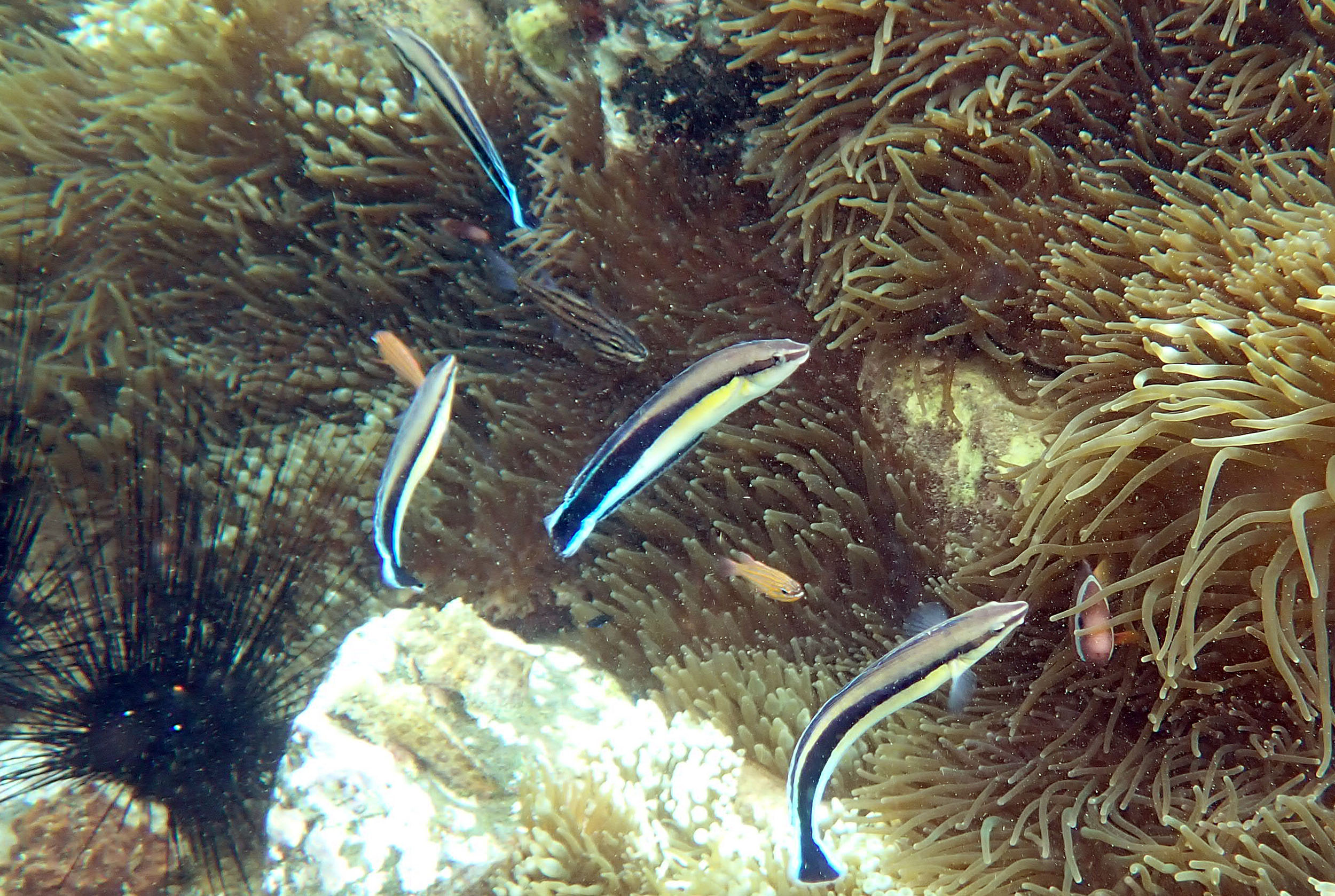 For the page on: Family Chaetodontidae, 'Butterflyfish'

This family is mostly found in the subtropical waters of the southern hemisphere.

Like Butterflyfish, Angelfish are also rather plate-shaped. However, they are more squarish in profile.

Pomacanthus sexstriatus, 'Sixband/Sixbar Angelfish'. Found in the central Indo-Pacific, from Sri Lanka, throughout south-east Asia north to Japan, across tropical Australia and east to New Caledonia. 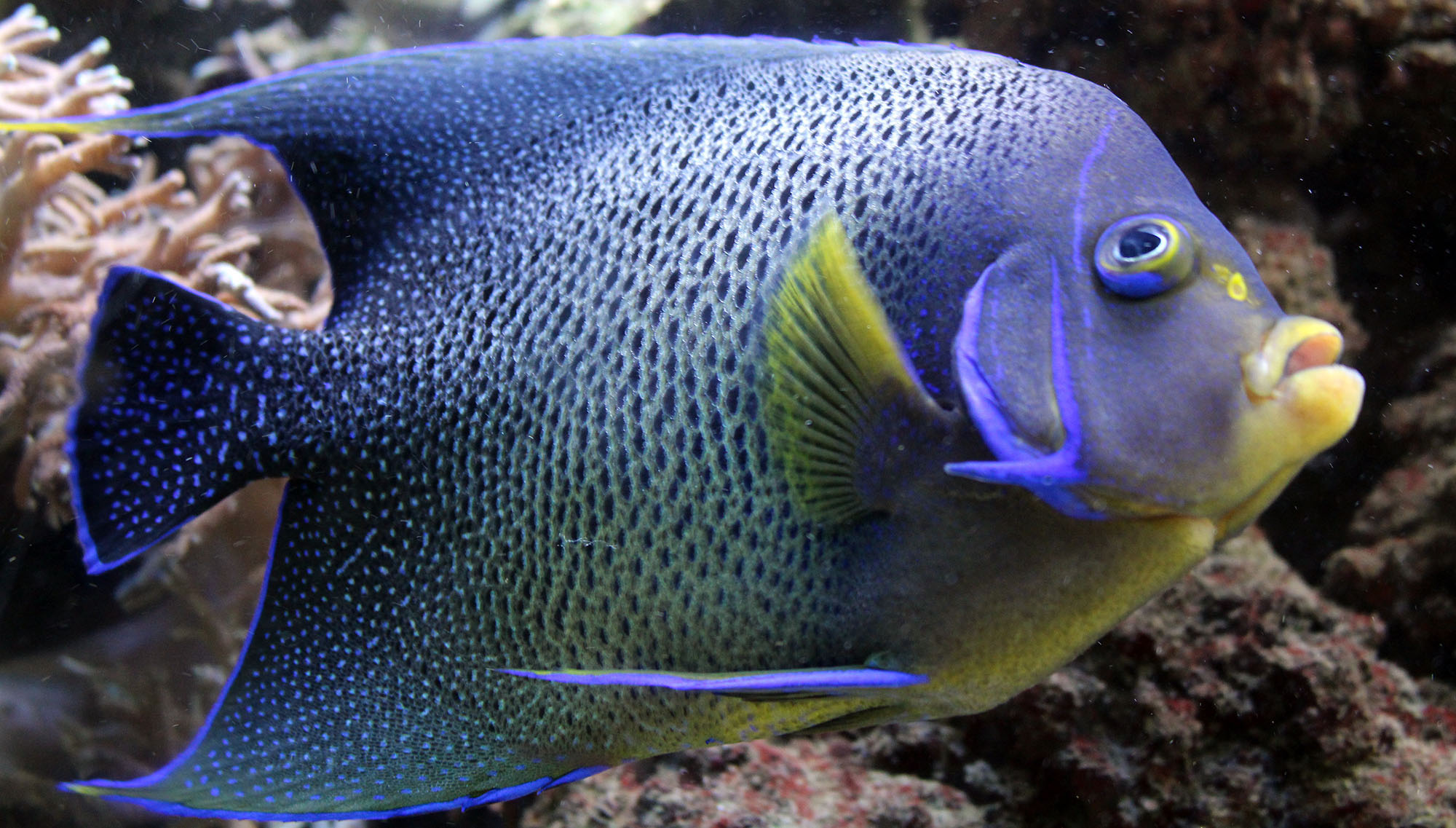 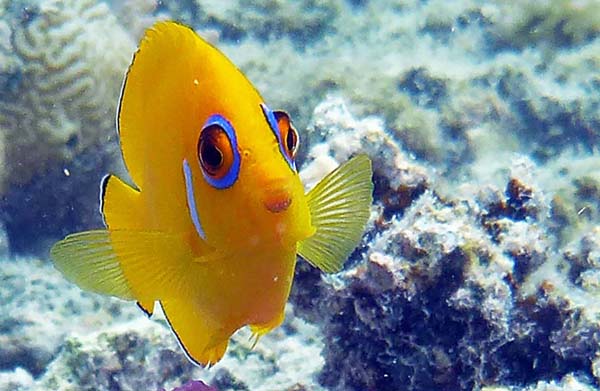 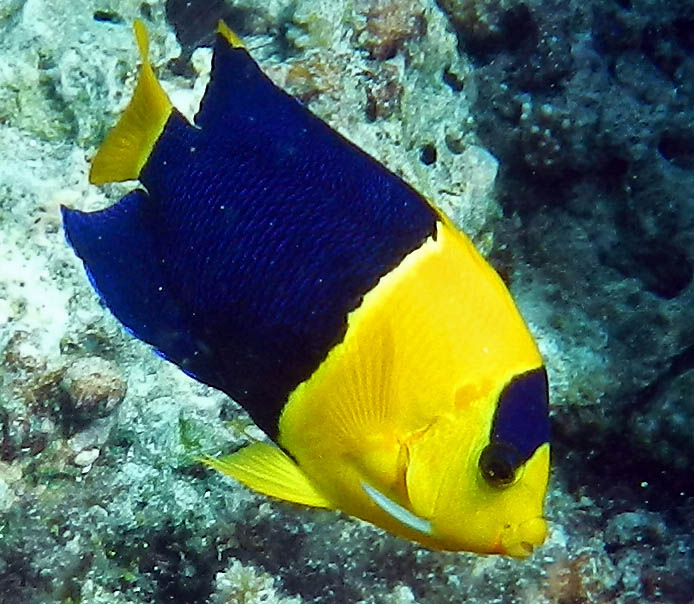 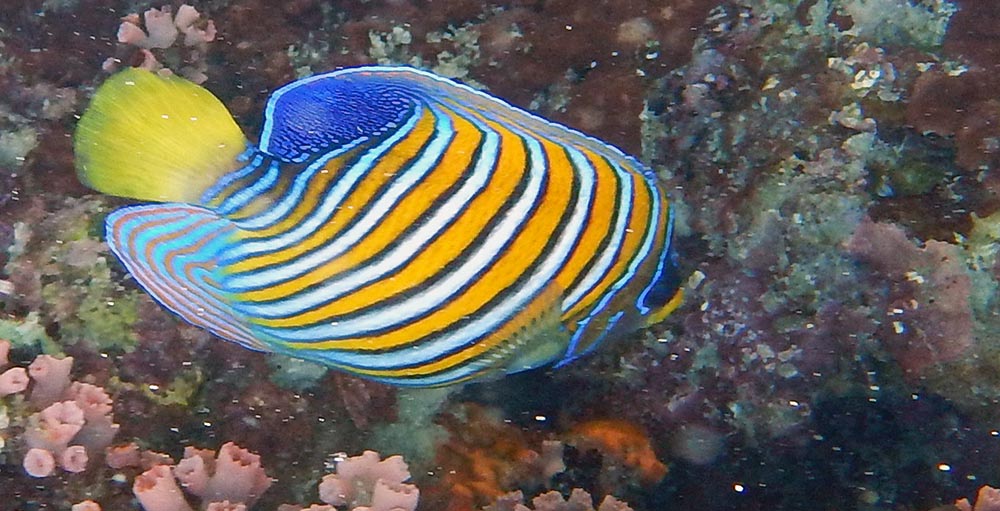 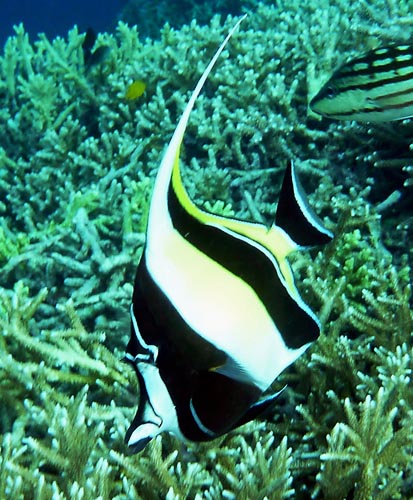 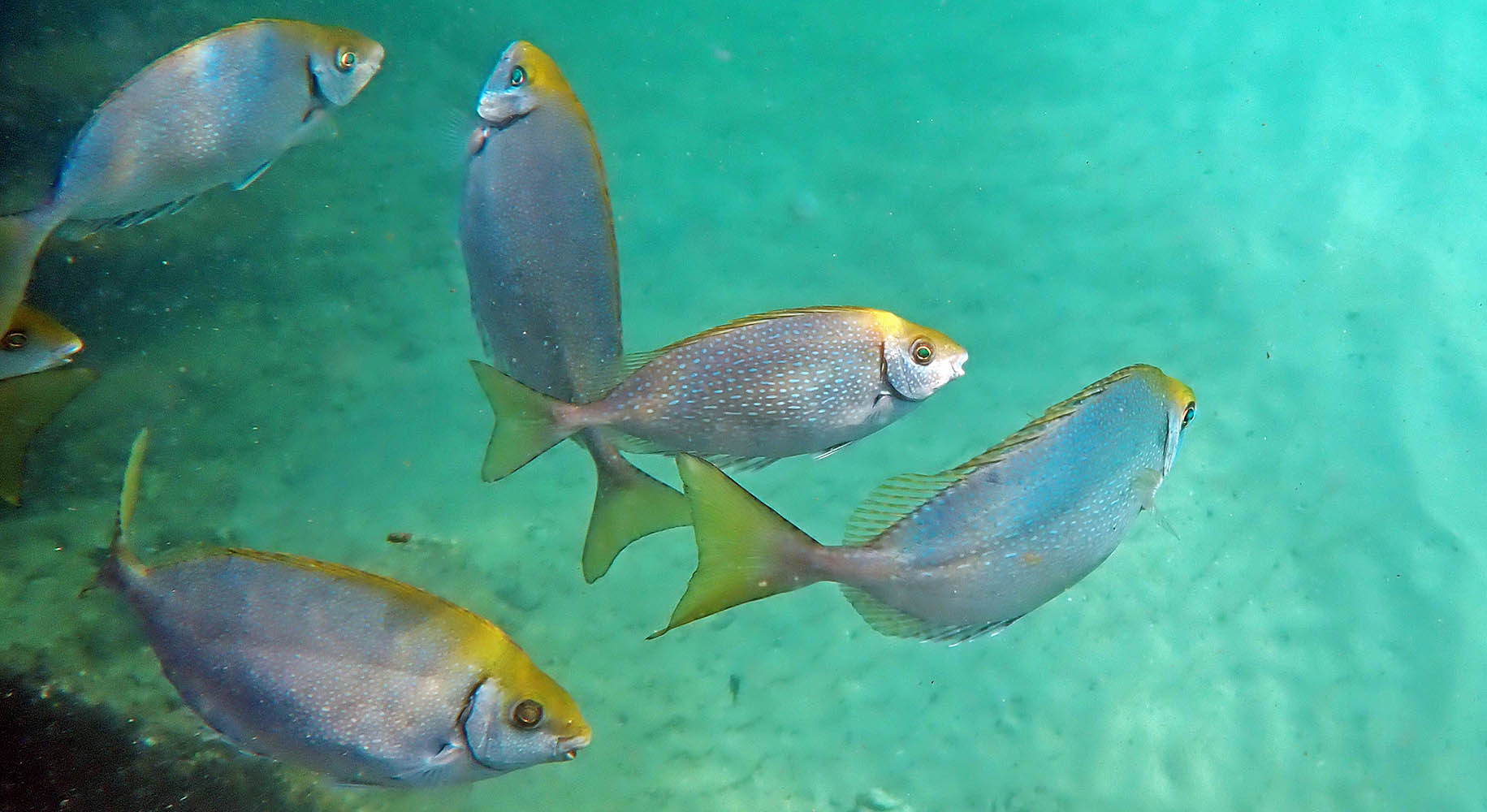 Siganus fuscescens, 'Black Rabbitfish'. This species often changes pattern and colour quite quickly when threatened (for example, seeing a snorkeler). 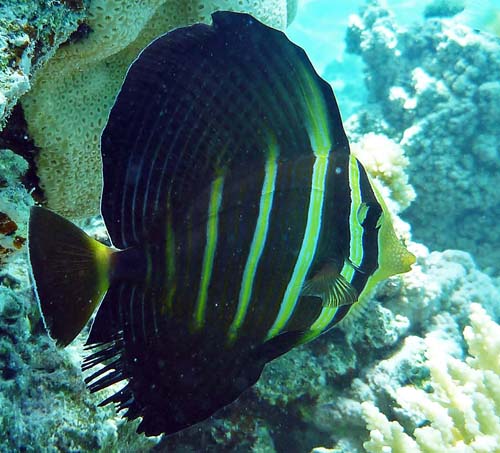 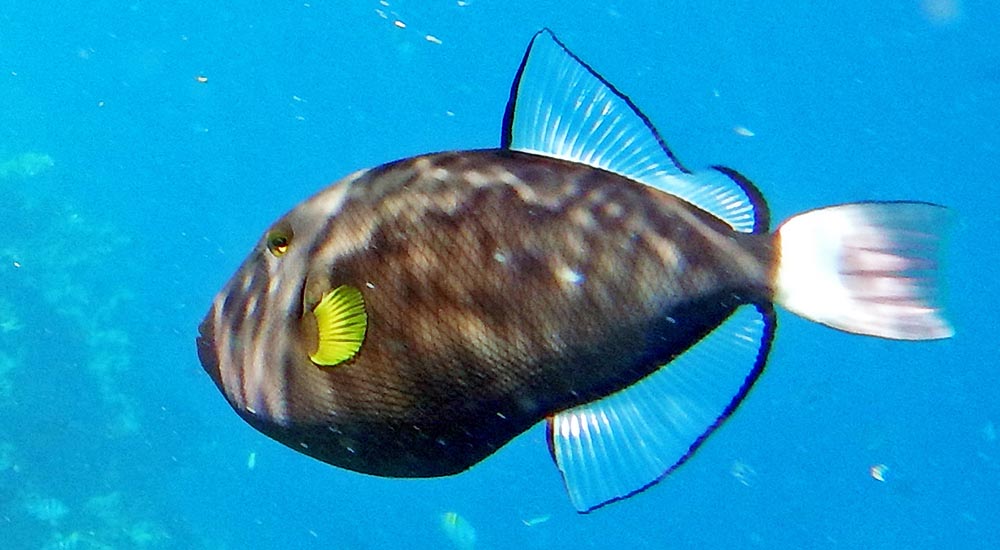 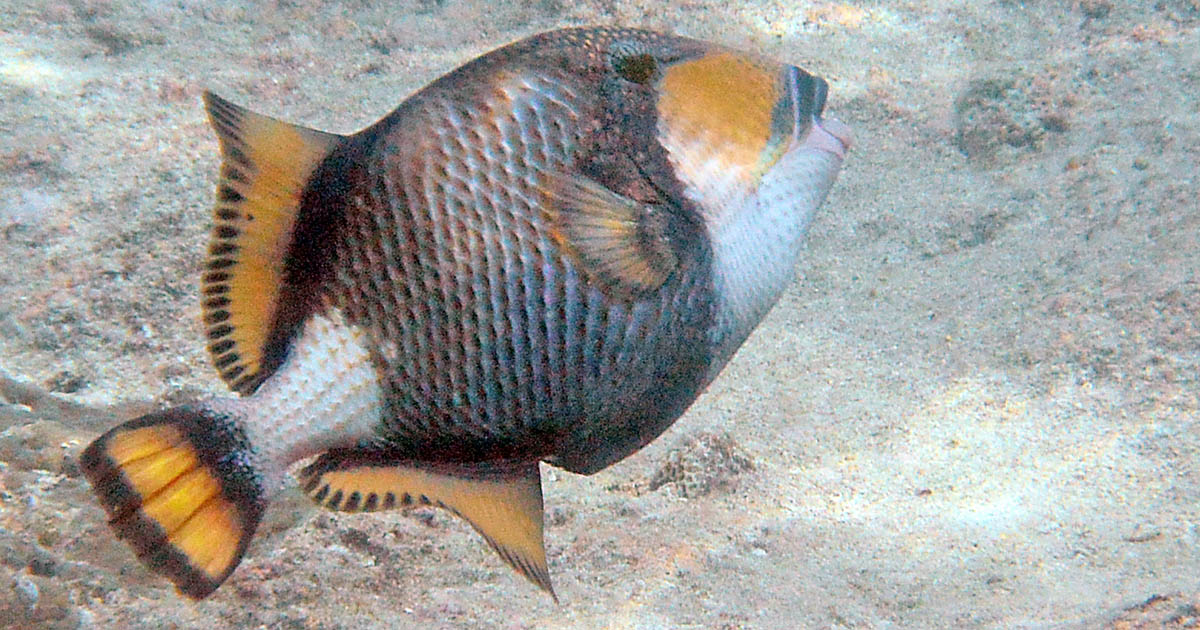 Balistoides viridescens, 'Titan Triggerfish'. Large; largest triggerfish in Indo-Pacific (there is a larger species in far eastern Pacific). During nesting season the females get very aggressive and may charge and bite. One of these large football-shaped fish racing towards you is one of the scariest things on the coral reef! 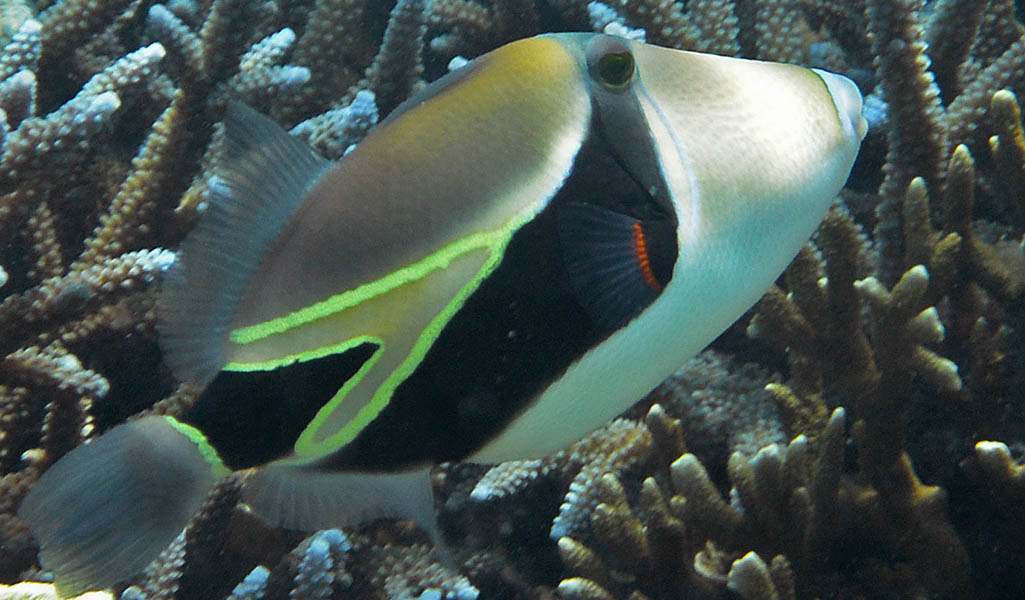 Rhinecanthus rectangulus, 'Wedge-tail Triggerfish', 'Black-banded Triggerfish', 'Humuhumu'. This is one of the two fish in Hawaii known as Humuhumunukunnukuapua'a (triggerfish with snout like a pig) . It is the state fish of Hawaii. Found widely on coral reefs across the tropical Indo-Pacific. 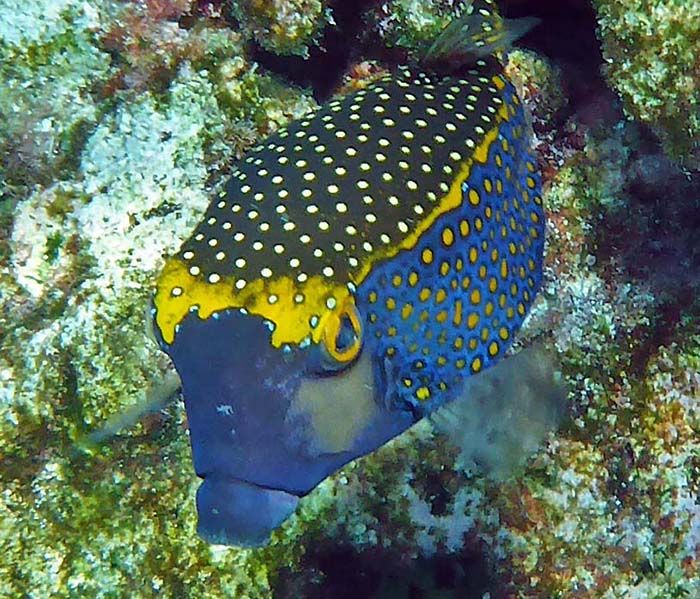 For a lecture on the behaviour of coral reef fish

Back to the page on Indo-Pacific Coral Reefs