Montgomery reef is (as far as I know) the largest regularly tidal exposed coral reef in the world.

I have visited Montgomery Reef on 5 different ships since 2004. I have been lucky enough to be able to explore it close up by foot, and by boat.

This reef is unusual; while most coral reefs, (such as those of Polynesia, New Guinea, south-east Asia, and the the Great Barrier Reef), are located in fairly low tidal range areas, the north west of Australia has the highest tides of Australia, and some of the highest tides in the world; so the reefs along the coast here are exposed.

Montgomery Reef is, at up to 400 square kilometres, the largest reef I know of to come out of the water to this extent on a daily basis.

It is also the largest inshore reef in Australia.

There are some small flat islands, the Montgomery Islands, within the reef system, as well as the 'High Cliffy Islands' along the edge. (although I have not been to either). There is a main channel or 'river' that boats can navigate up. This is the main way to experience the reef. 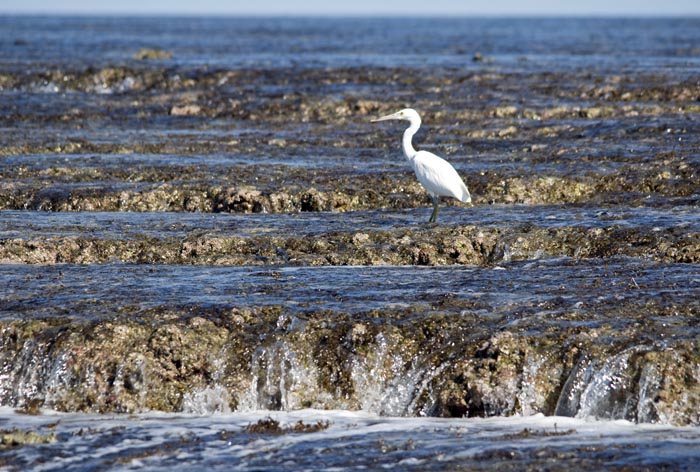 The tides in the Kimberley coastal region are huge; an average day might see 6 to 8 metres variation across the reef. So on a big high tide, most tour ships can easily pass over parts of Montgomery Reef. But within a few hours the reef can be exposed and tower over 4 metres above the water. This can trap boats, and also trap animals, such as turtles.

Aboriginal people are believed to have had a long history here. It was observed that they rode out on rafts (made from a double layering of tied together Kapok mangroves) using the tides; they were nicknamed the 'tide riders'.

More controversially, it was recorded at one stage that a race of rather tall Aboriginal people lived on the associated 'high cliffy islands', but when westerners returned to the islands to verify this, no people could be found. There was evidence of seafood remains and circles of rock believed to mask their campfires.

The reef here was named by maritime explorer Philip Parker King, for one of his surgeons, Montgomery, who was speared non-fatally in the back by the local aboriginal people. Today, the reef falls under the management of the Dambimangari. It is part of Camden Sound Marine Park.

One of the most common animals seen around Montgomery Reef are sea turtles. When the tide is out, many turtles are squeezed into the ''river', and over a few hours one can see dozens and dozens of them. They are often found both in the water and stranded on the reef. One can often see turtles stuck up on the reef at low tide. Some that are near the edge attempt to crawl down by scraping themselves along with their flippers; however they only drag themselves across fairly slowly and the tide can go out faster than they can move. So they end up giving up and laying there, waiting for the tide to come back in. In most circumstances, they should be able to survive for the next few hours in the sun, for there is always some water on the reef, so they can retain some moisture. However, they are in the unnatural position of having much of their body exposed to the sun, which can be issue in the middle of the day, so assistance is ocassionally required. They are heavy, so you need at least two people to move them. 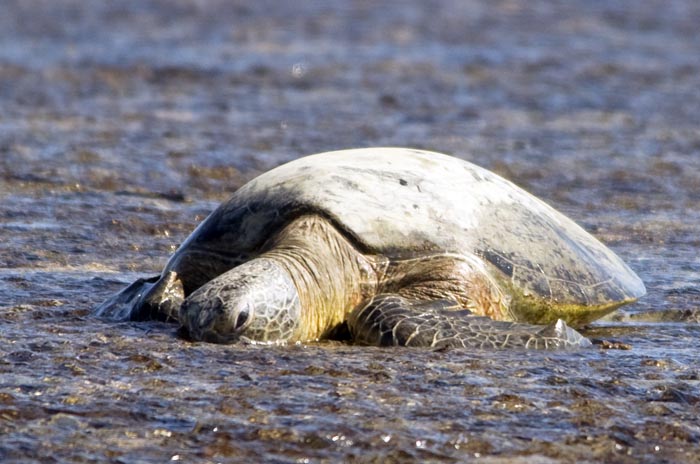 Montgomery Reef is sometimes referred to as an 'algae reef', as much of the physical structure is thought to be made up of seaweed as much as coral. Soft corals are common on this reef and easy to see, such as the 'elephant ear' Sarcophyton and Lobophyton. The range of hard corals include needle coral, small staghorns, (smaller ones on the edge, and larger ones in some of the top lagoons, that always have water), as well as horsetooth coral.

I have seen large ones, such as 'Stokes Sea Snake', as well as smaller banded Hydrophis species.

There is a large number of birds, although there is limit of the diversity of species. By far the most common bird is the Eastern Reef Egret. There are two colour morphs; white and dark grey; they are the same species and interbreed. 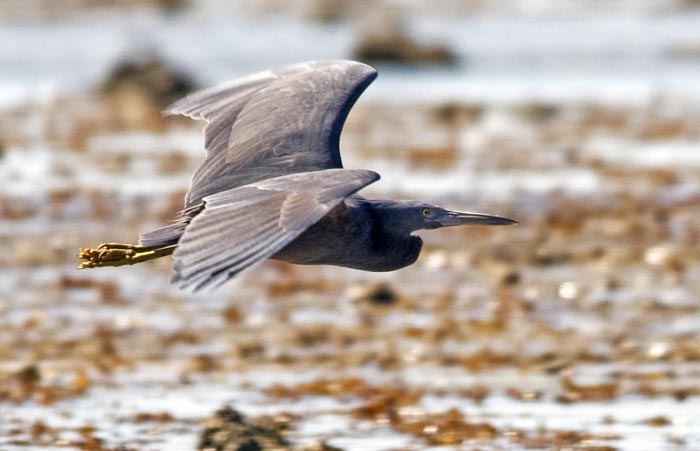 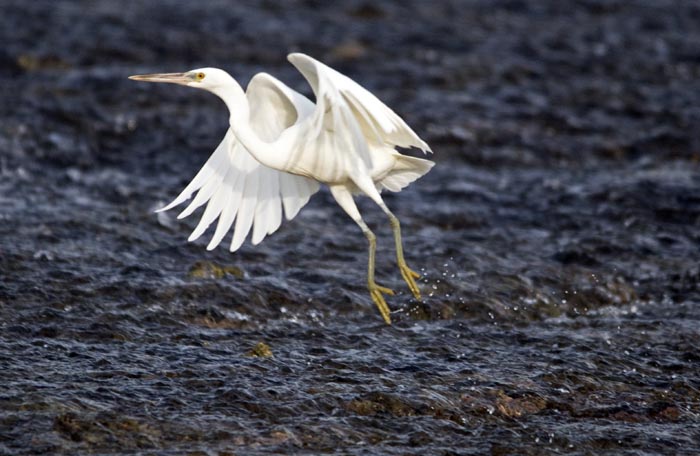 Other birds include: Eastern Pacific Osprey (pictured below) 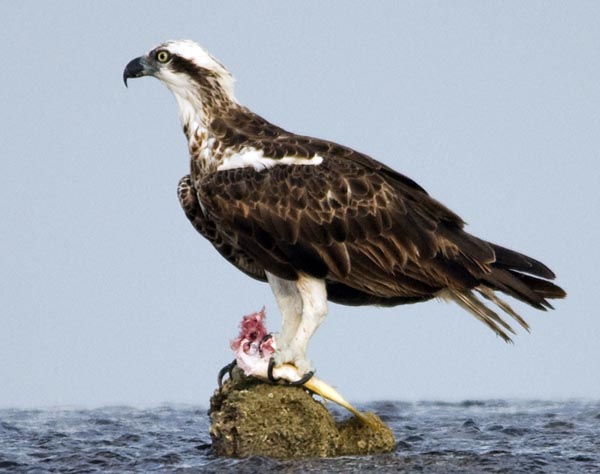 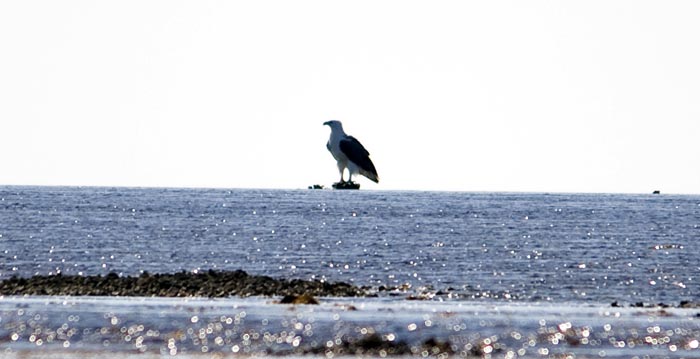 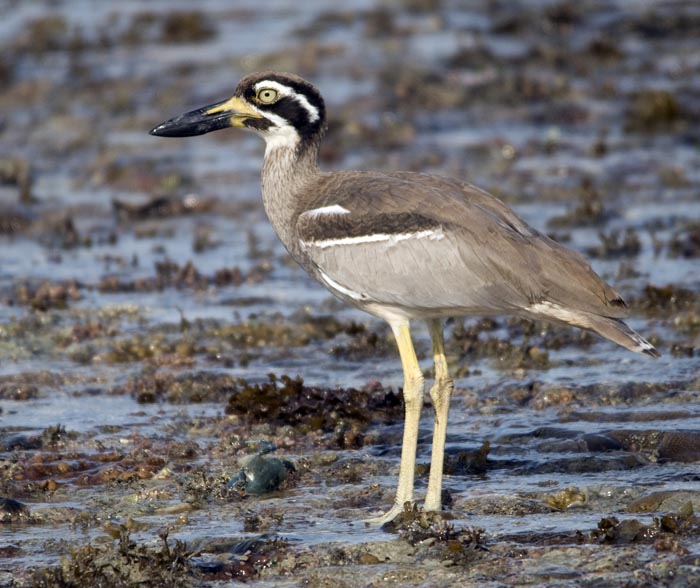 Several tour companies explore Montgomery Reef. As far as I know, all of the options are pretty much overnight on ships. I have visited with Coral Princess Cruises, the now defunct Orion, Lindblad, Noble Caledonia, APT and Silver Sea. They provide interpretation from qualified guides, although individual trips and the companies vary somewhat in their approach.