The vast and beautiful open ocean of the tropics is the largest ecosystem on the planet... 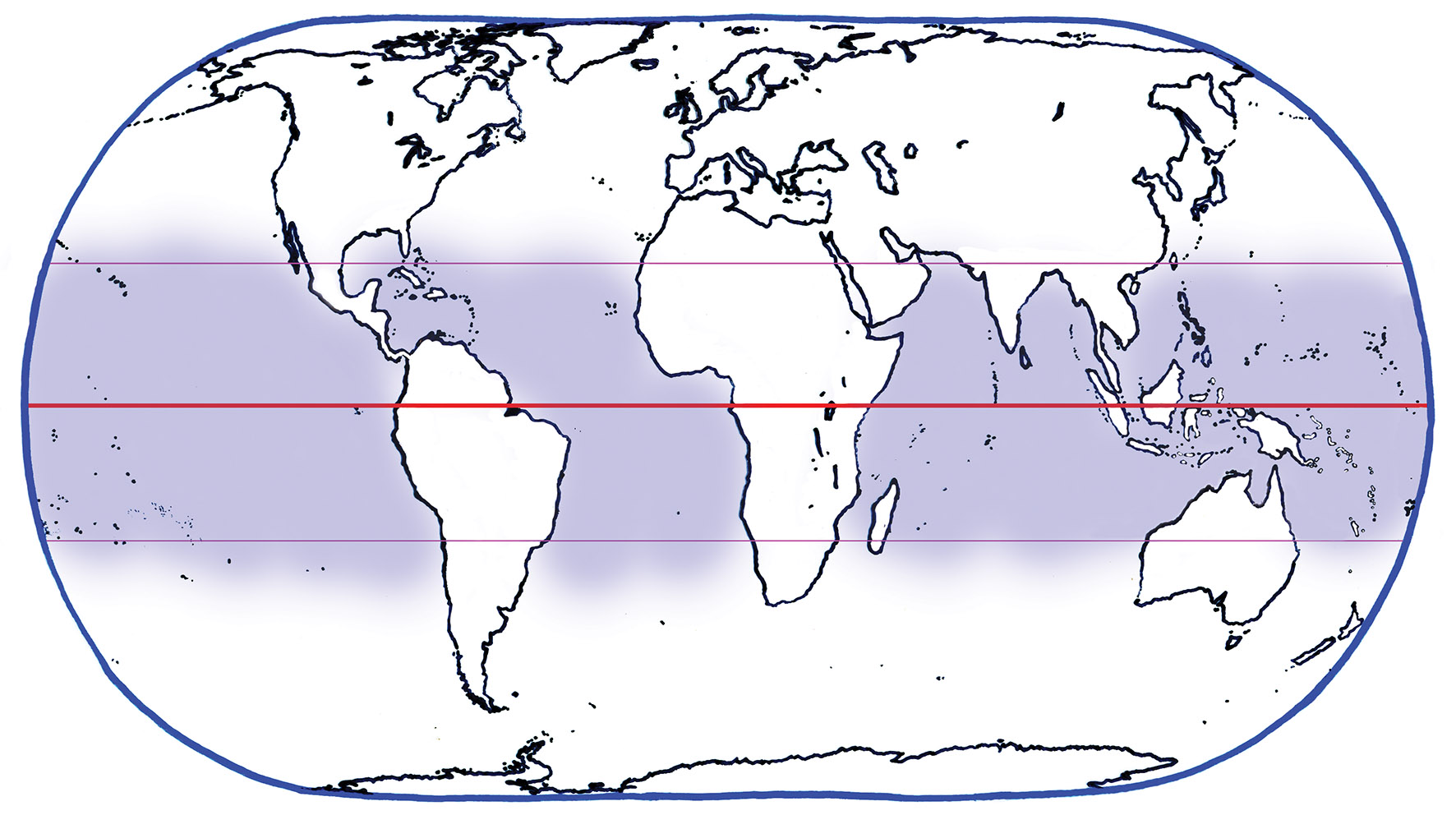 These jellyfish usually have four arms, but are most recogniseable by the long long wispy tentacles trailing from the bell. The edges of the domed bell are scalloped. 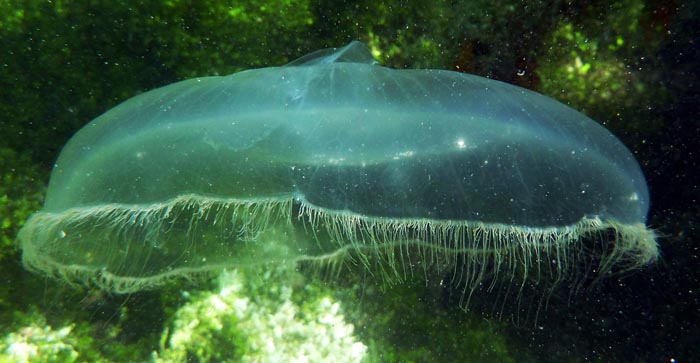 These sea-Jellies have eight 'fluffy' divided arms hanging from the bell, rather than the thin wispy tentacles seen on other jelly fish. 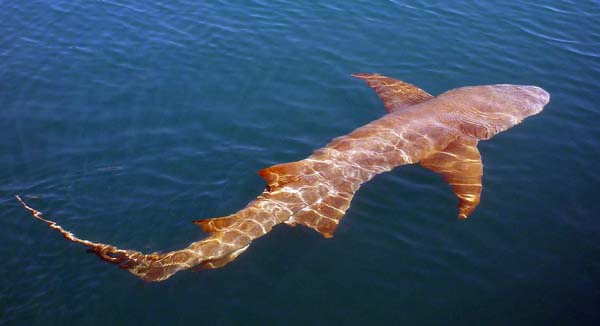 This family only contains one living species...

Rhincodon typus, 'Whale Shark'. The biggest fish on the planet. 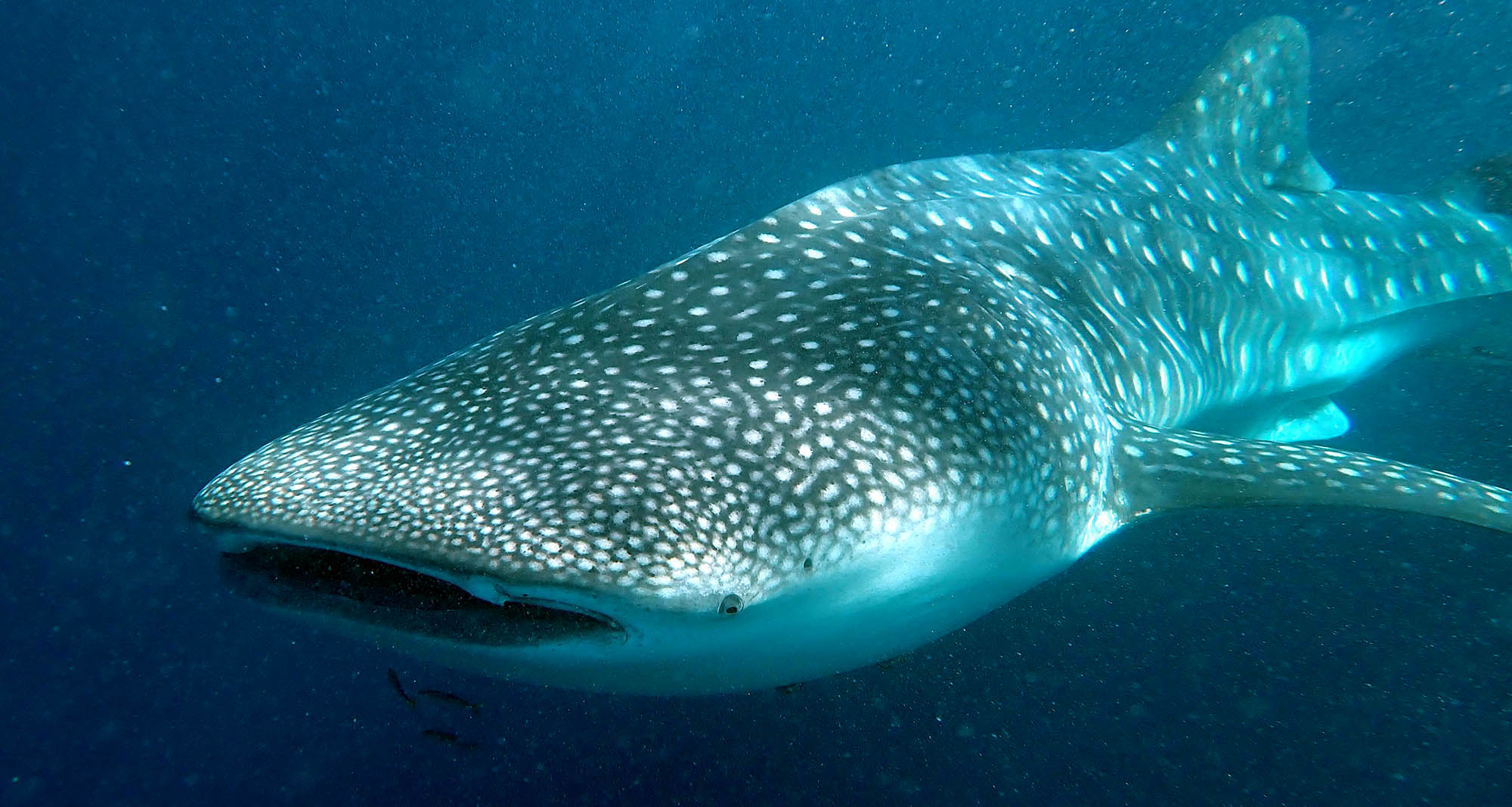 Despite their intimidating size, these sharks do not eat people, but mainly feed on plankton. To filter feed through the water, Whale Sharks have their mouth at the front of their head, unlike most other sharks that have the mouth underneath the head. 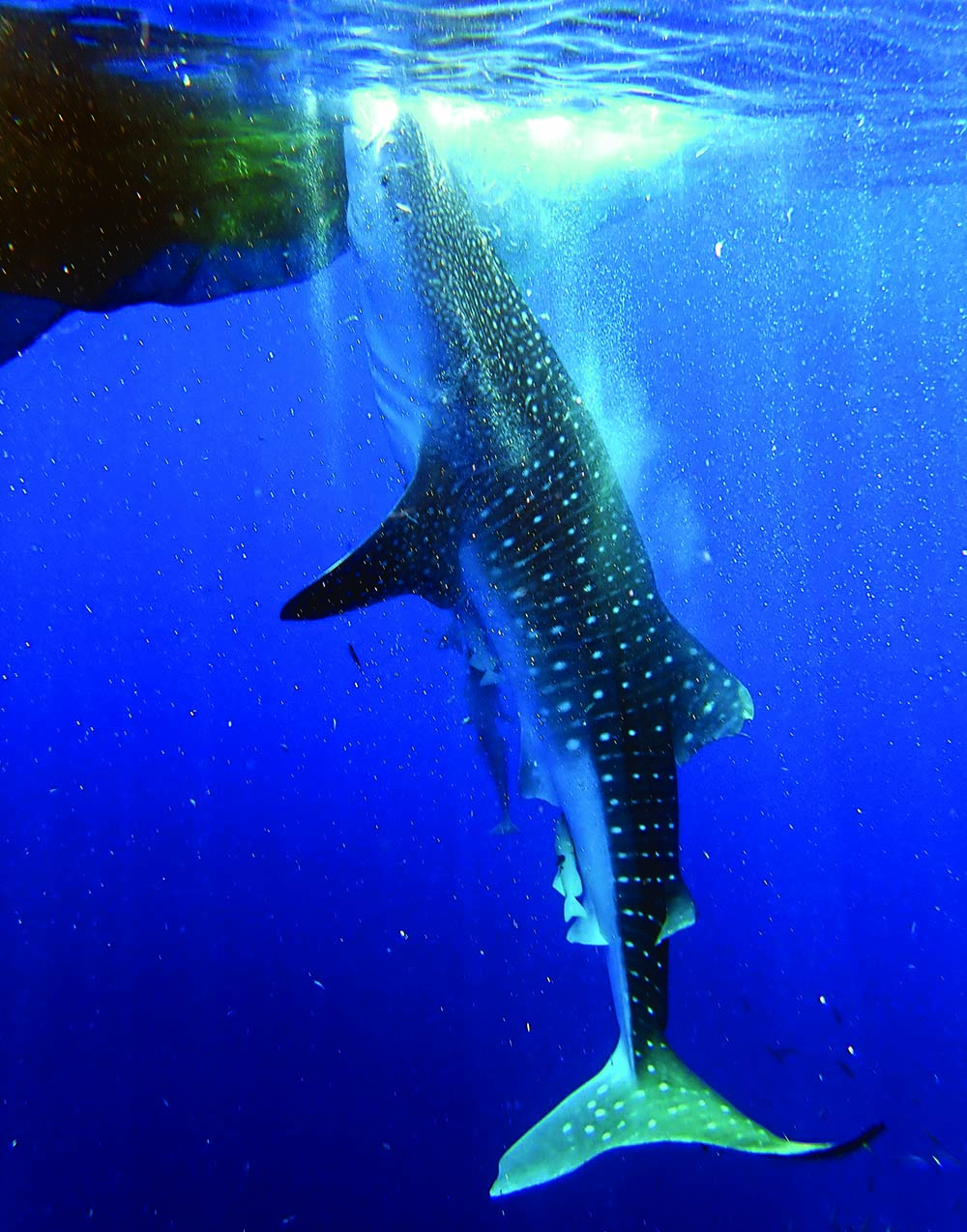 Whale Shark being fed by humans from a fishing platform, in West Papua. They are found in open oceans throughout the tropics and sub-tropics. They have been recorded as far south as Victoria (Australia), but like most sensible humans do not live permanently down there.

This group contains various families of mostly unusually shaped fish such as Boxfish, Pufferfish and Sunfish. 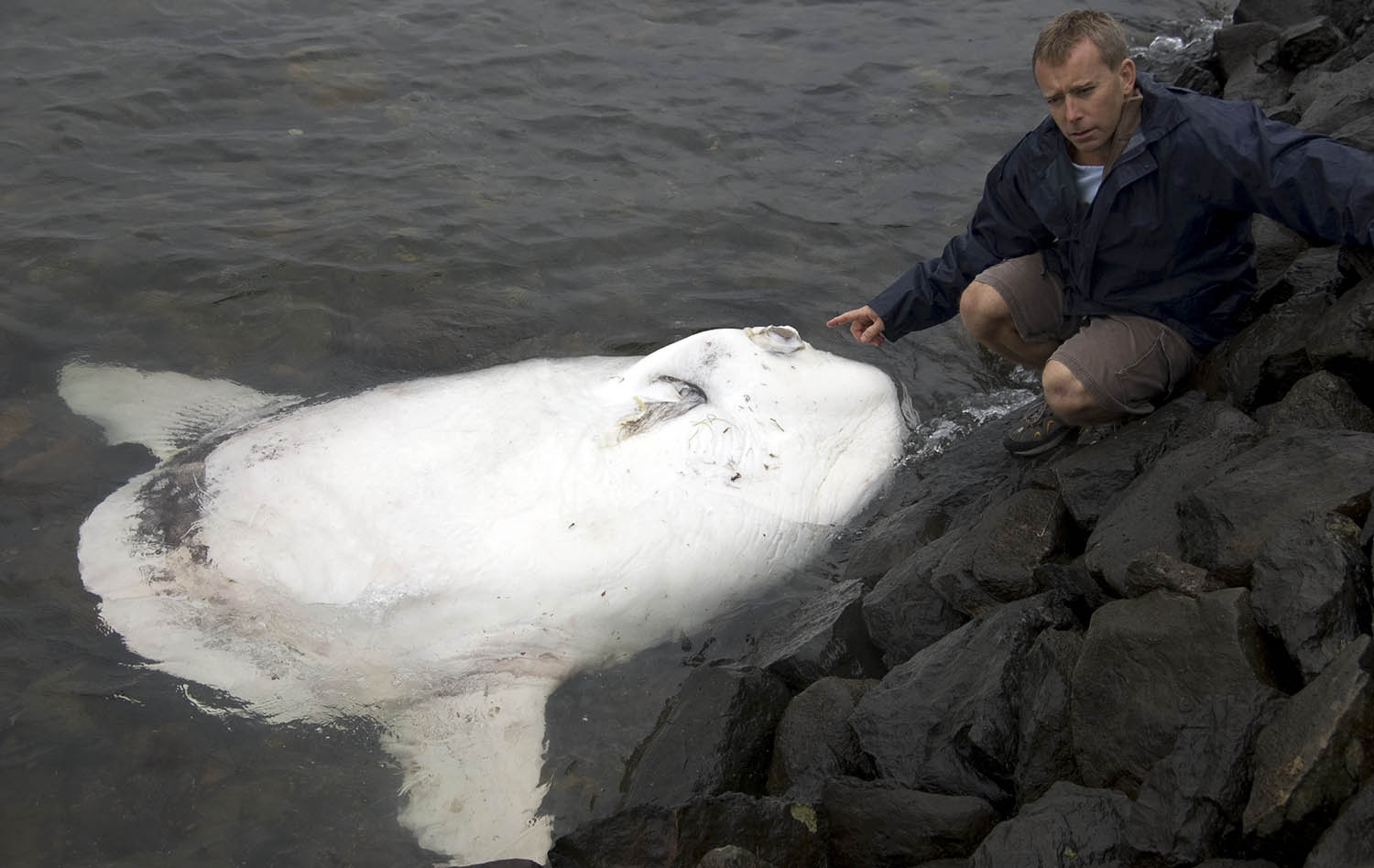 There are three species of Sunfish. They look like giant heads with tails, and often bask sideways at the surface of the ocean. They are the heaviest bony fish in the world. The most widespread is the Mola Mola 'Sunfish' found in tropical and temperate oceans around the world. Mola alexandrini, 'Southern Ocean Sunfish', 'Bump-head Sunfish' is found around south-west Pacific.

For the page on flying fish of the tropical open ocean

One of the most commonly seen fish across the tropical open oceans are flying fish. Yet surprisingly few people have seen them, nor is there much known about them.

'Reptiles' including dinosaurs and birds.

(off the Lacepede Islands, Australia)

The 'true sea snakes' are purely marine animals, they can't crawl on land and are quite floppy when picked up (although you probably shouldn't pick them up). This distinguishes them from the 'Sea Kraits', usually classified in the different Subfamily Laticaudinae, which are slightly more amphibious and can crawl up on land to rest and digest.

Sea Snakes are mostly found across the tropical Indo-Pacific ocean. In my experience, they seem more common in the continental shelf waters in the Arafura and Timor seas off northern Australia. They are best seen on calm days when the water surface is slick and smooth. But you may have to wait for many hours on the deck of a ship to see one. But it is worth it to see something most people have never seen!

This order includes birds are the more common above the colder more nutrient-rich southern oceans, such as Albatross and the petrels.

Ardenna pacifica, 'Wedge-tailed Shearwater', 'Muttonbird'. One of the more commonly seen and widespread of the shearwaters, being seen across tropical seas. 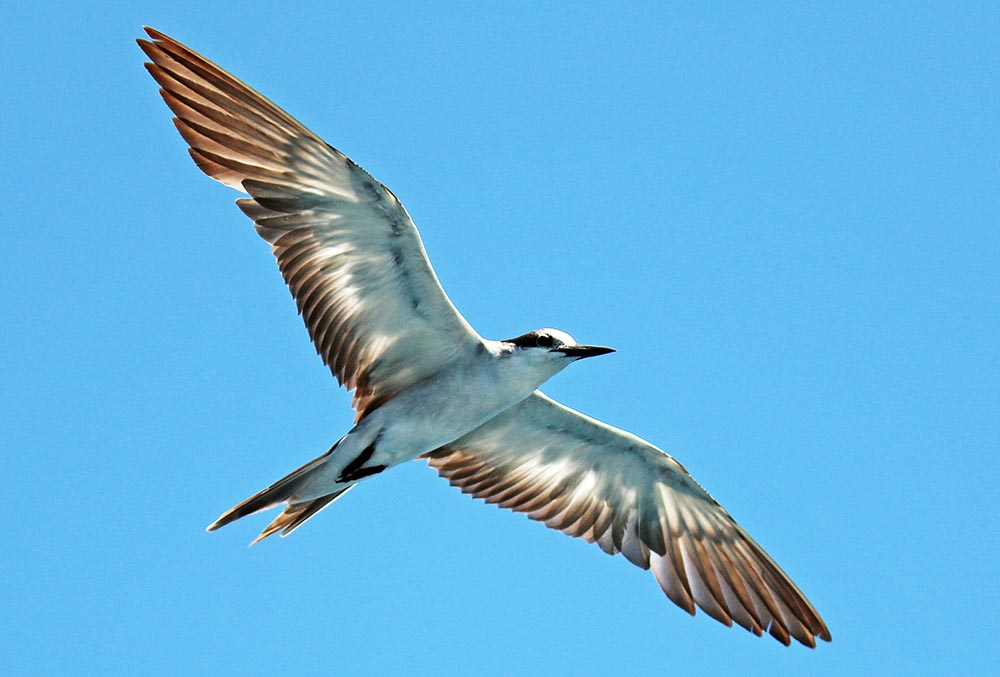 This order only contains one family. 'White-tailed Tropicbird' in the surface of the water. 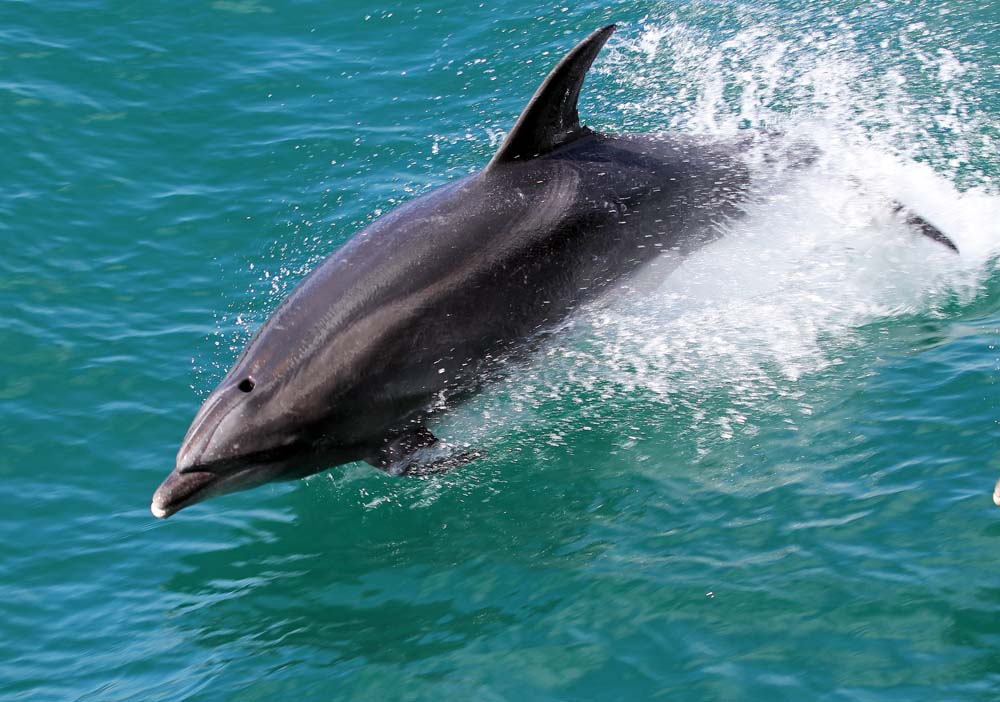 Stenella longirostris, 'Spinner Dolphin'. This species probably includes many species; as the very least there are many distinct forms around the world. In the middle of the Pacific Ocean, far away from land, I have seen very tiny forms of Spinner Dolphins. 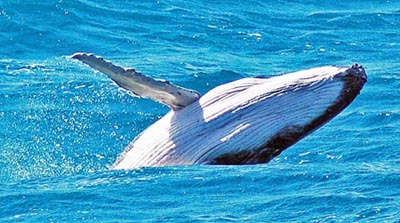 include Cenderawasih Bay and Kakaban in Indonesia, and off Donsol Philippines.