The bacteria, and the brown, green & red algae & seaweed, and other non-flowering 'plants' that live along the shores of the tropical Indo-Pacific...

Cyanobacteria are also known as ‘blue-green algae’, although it is not actually an alga. However, it is photosynthetic like algae (or a plant). The pigments are sometimes blue green in colour, but this accounts for only half the range, for there can be many other colour pigments in this bacteria. Cyanobacteria are in fact bacteria, and therefore a very primitive life form. Some cyanobacteria may have evolved, as a symbiont, into some of the chloroplasts that are in some algae. Billions of years ago, Cyanobacteria were thought to have elevated the oxygen of the atmosphere of the Earth. More than 7500 different species have been described, although most of these are probably symbiotic forms. The best known symbionts are those that live with a fungus and form lichen; they provide the photosynthetic part of the relationship. Cyanobacteria can be found growing in a range of places, from the hot waters of springs, to beneath ice in Antarctica waters, Other famous cyanobacteria include some of the plankton ‘blooms’ that occur in both marine and fresh water. 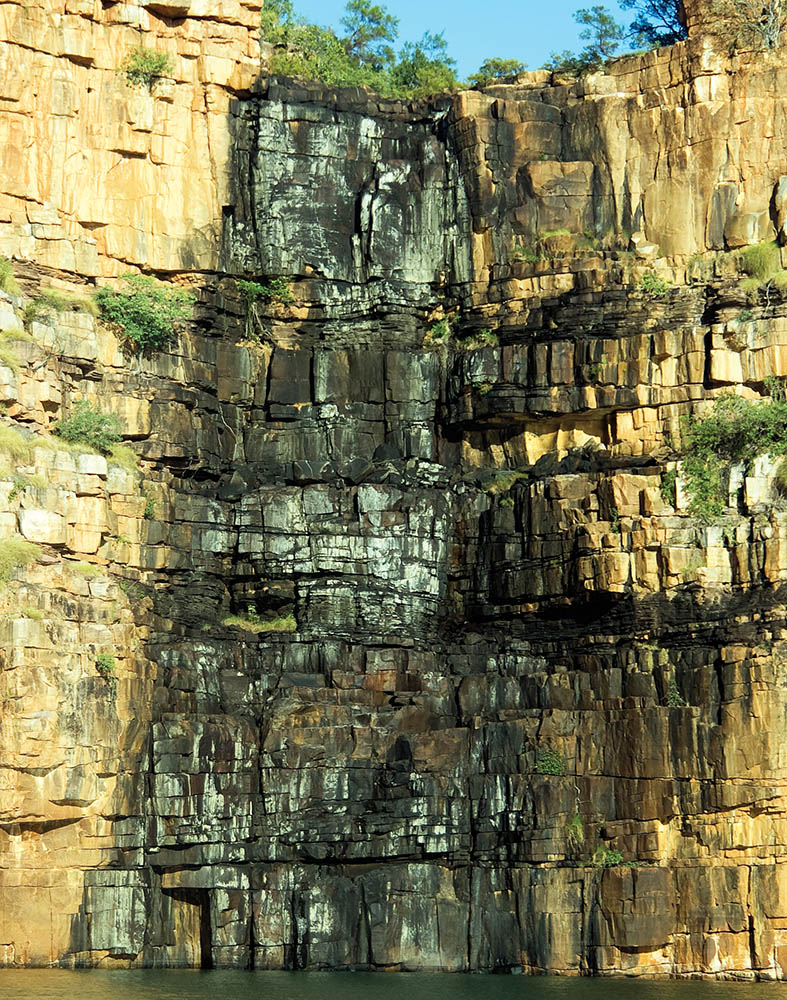 Along the tropical shores cyanobacteria is most commonly noted growing on the outside of rocks and on cliff faces. It gives the rock a dark, almost black veneer, only revealed to be a surface colour when the rock, such as granite or sandstone, is smashed open to reveal the true pale hue of the rock underneath. This usually occurs in areas of higher rainfall, or in areas where there are splash zones from rapids or waterfalls.

Another occurrence of cyanobacteria along Australian seashores, and one of the most famous of all cyanobacteria, are the ‘stromatolites’. They are the result of colonies of cyanobacteria slowly binding calcium carbonate into short fat dome-like structures over millions of years. Even though they common in the fossil record, there are few places in the world where it is happening today; one such famous example is in Shark Bay Western Australia.

There are over 1500 species of ‘brown seaweed’. As suggested by the common name they are frequently coloured browns and yellows. They have pigments that can photosynthesize in much lower light, and tend to live in deeper waters. Many types of brown seaweed have air-filled, grape-like floats which enable the plant to stay at the surface with the moving tide. They sometimes break free and get washed up on seashores. Here we focus on the shallow water and commonly washed up species. 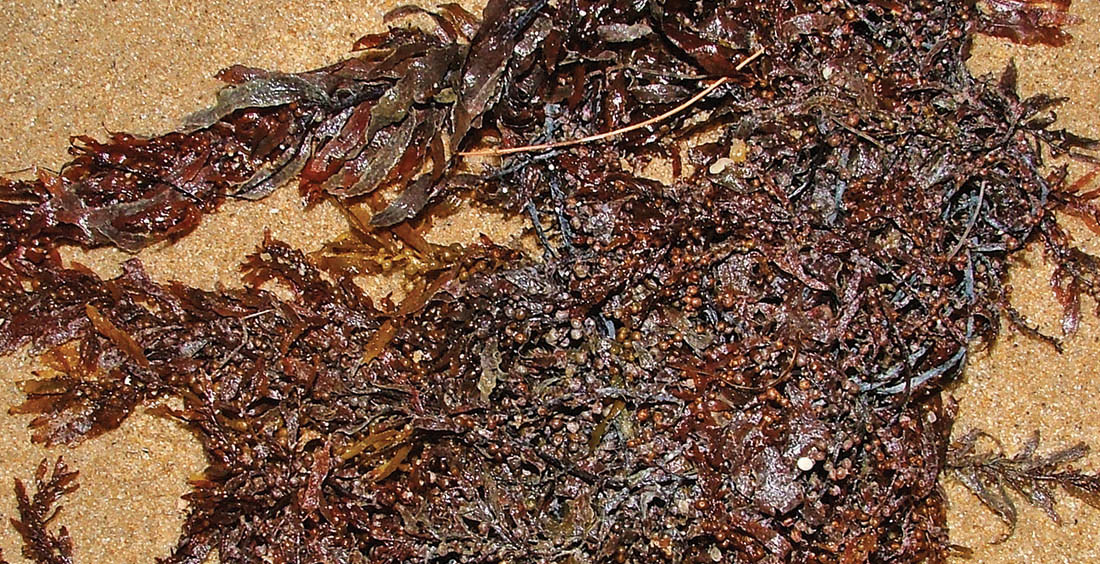 The Sargassum genus includes some of the few free-floating seaweeds. They have many leaf-like stipes with toothed edges, arranged along a ‘stem’, and so they resemble the branches of a tree. They have many brown, grape- like floats. They are very common in the warmer waters around the world, and are probably the most commonly seen group of seaweeds in tropical water. Because many species are not attached, they commonly wash up on tropical shores. 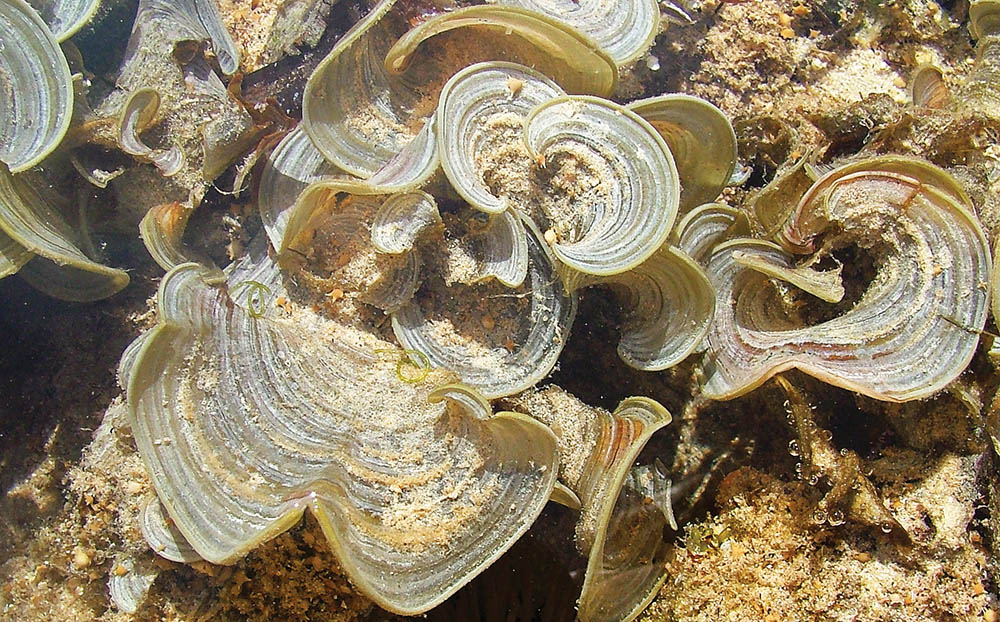 This is a very distinctive group of seaweeds. They are light brown, fan shaped, with distinctive concentric circles, giving them the appearance of shelf or bracket fungi. They differ from the other round brown seaweeds by the outer rim, which is thickened and curled in, and the regular ear-like folds. The fine lines are made up of rows of microscopic hairs, while the thicker darker bands are made up of reproductive spore structures. The pattern of these lines help in distinguishing different species of Padina. Some specimens may develop a slight chalky thickening on the surface, due to calcification; they are the only group of brown seaweeds that do this. Funnel weed can be common in coral and rubble shallows, and they appear to be more common where it is a little murkier.

These very distinctive seaweeds look like spiky, underwater Banksia flowers. They float upright from an attached central stalk, sometimes up to a foot in height, and may even break the surface of the water at lower tides. Along the top half of the stalk many smaller branches grow off to form a dome shape, and each has flat, star-shaped spikes at the end. They can be common in the murkier sandy shallows, and sometimes wash up on tropical beaches.

This kingdom includes all the land plants, but has recently been expanded into the Archaeplastida to include the green seaweeds with the other green plants, as well as the red seaweeds in a sub group.

The 4000 or so different species in this newly erected group within the plant kingdom are commonly known as the ‘red seaweeds’. They by far outnumber the ‘brown algae’ and green seaweeds. Although there are some freshwater species, most Red Algae are marine, and they are especially common in tropical and warm waters. This alga can appear in many different colours such as black, brown and (as suggested by the common name) red. This is due to a red accessory pigment blocking out the colour of the regular photosynthetic green chlorophyll.

Because there are many species of red algae living in warmer seas, they commonly wash ashore on the tropical seashore. Many species, particu-larly those in the family Galaxauraceae, have dichotomous branching, looking like many little stems on a shrub. When washed ashore, red algae often retain attractive red or pink colours. But many will have white; this is from calcification. Because of this, many species may remain stiff and solid after being washed up. But they tend to go brittle, and if the joints are not calcified, the plant may fall into a tangled mess

These are the most familiar of all seaweeds, and commonly found on seashores around the world. As the name suggests, they tend to be green, but this doesn’t do their range justice, for they occur from deep dark green to bright light green. This green colour is caused by chlorophyll, the same pigment that land plants have. Of all the ‘seaweeds’, these are the closest relatives to the green land plants. 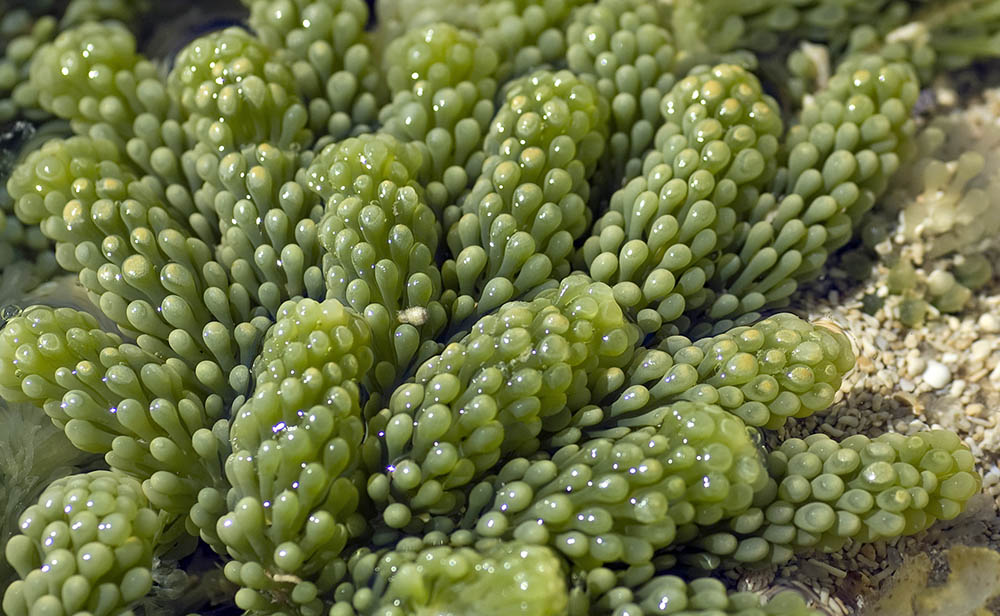 This very large genus contains a variety of quite different looking green seaweeds. From a creeping stolon grow several upright bunches, with (depending on the species) bubble or leaf-like vesicles. Some are very common, such as Caulerpa racemosa, which is found throughout shallow tropical seas of the world 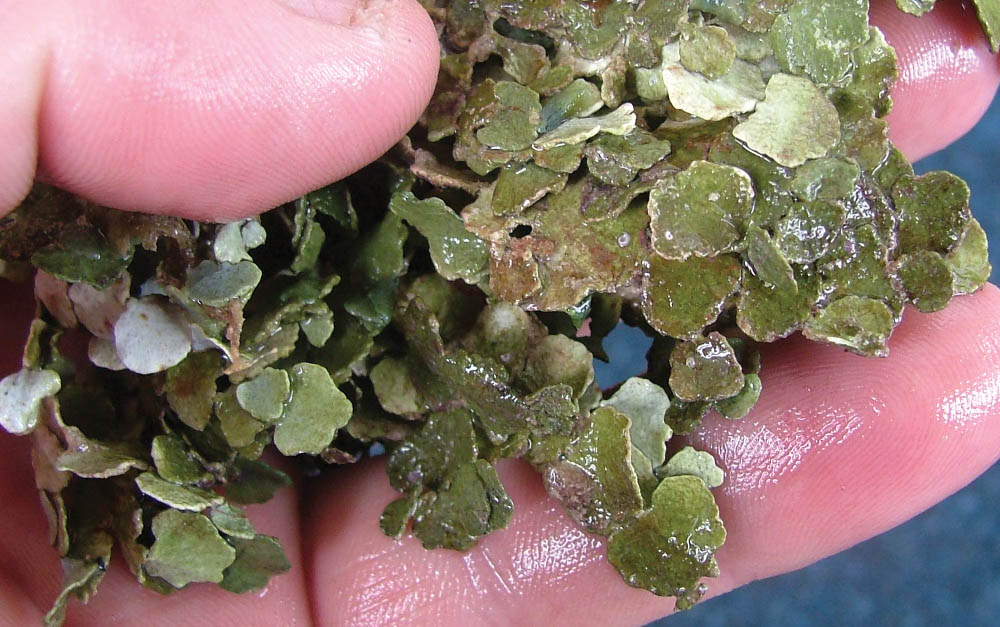 The species in this group are one of the more common seaweeds on coral reefs, and therefore are regularly washed up on adjacent tropical seashores. They are distinct, being made up of many flattened round or square shapes joined together in chains or fanned clumps. Their most important feature is the calcified stiffness of these tiny ‘leaves’. When they wash up, they will bleach to white, but often stay linked together. When they break down they contribute greatly to the sands of beaches, especially coral cays. The genus is named after Halimeda, one of the daughters of Halimedon, Greek King of the Sea. 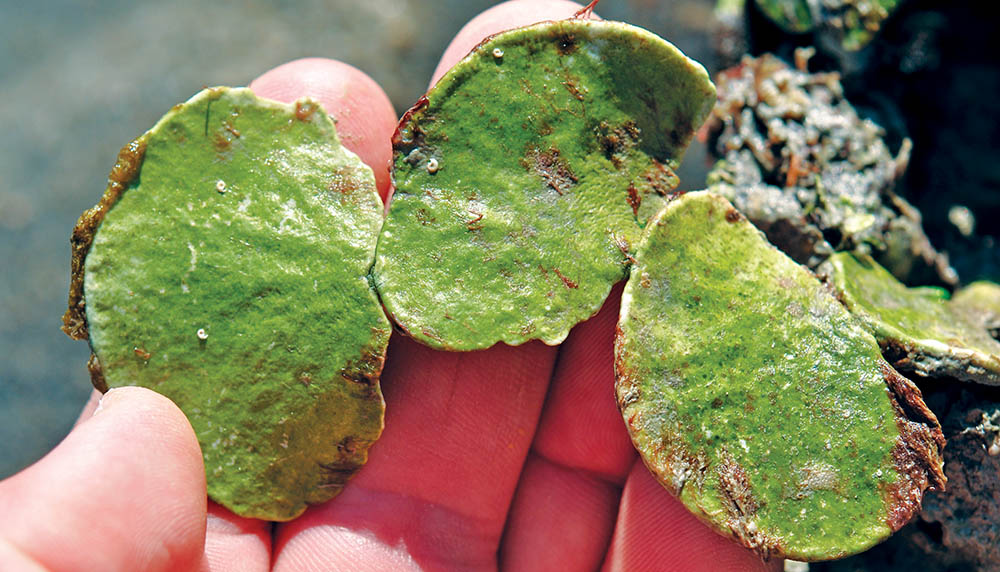