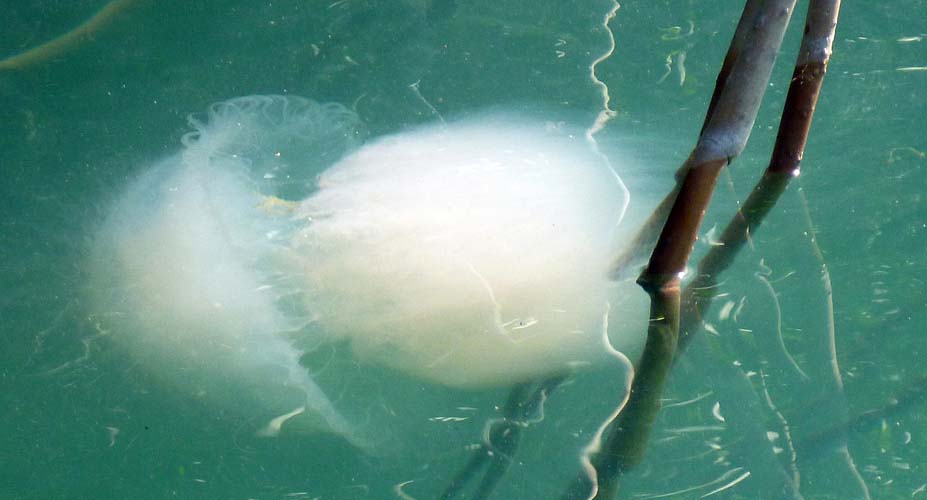 Some species of jellyfish swim up river to breed. In areas with large tidal ranges, the outgoing tide may resulting in jellyfish hanging from mangrove tree branches like plastic bags.

These are the crabs that have their eyes located at the end of stalks.

Small and usually colourful crabs. The adult males have one enlarged claw that they wave around to establish territory, fight other males, and attract females.

When a mosquito bites a human, they are inserting a long section called a stylet into the skin to draw out the blood. Like other flies, only the female bites, as she needs the blood to produce her eggs. Different mosquitoes attack different species of vertebrates, including frogs, birds and mammals. Particular species of Culex attack mainly birds, while others in the genus Aedes attack mammals. Some mosquitoes inject a compound through their saliva which reduces blood clotting; this is what often causes the bites to itch later on. The bite in the image above...still itches.

This huge family contains mainly smaller fish, particularly around the coral reefs, but they mostly lie motionless and generally go unseen. However, a (or several), small subgroups of the gobies have evolved into the mudskippers.

There are over 40 species of mudskippers. They are found along the coasts of the tropical Indo-Pacific, from eastern Africa, through Asia and into the Pacific. They are not found in the Atlantic, except for one species that occurs on the western coast of Africa. They are absent from the Caribbean.

They are referred to as ‘mudskippers’, as they do indeed skip across the mud, with a flick of their tail. They also drag themselves along with their well developed and strong pectoral fins.

Another remarkable feature associated with their amphibious lifestyle are their bulbous eyes. These are huge for the size of the fish, and sit atop their head, giving them the potential for almost 360 degrees view. This helps them keep watch for movement of potential predators, such as kingfishers and egrets. The eyes can be completely sucked back into the eye socket to keep them moist.

Mudskippers also have bimodal respiration, which means they can breath both in the water (with gills) and in air. When on shore, like the unrelated frogs, they can perform cutaneous respiration, breathing through the skin, and through the lining in their mouth and throat. This requires that they stay moist, so mudskippers are never too far from water, and which is why they may be seen to occasionally roll in puddles. They also inflate the opercular chambers with air and so look like they have huge ‘chipmunk-like cheeks’. 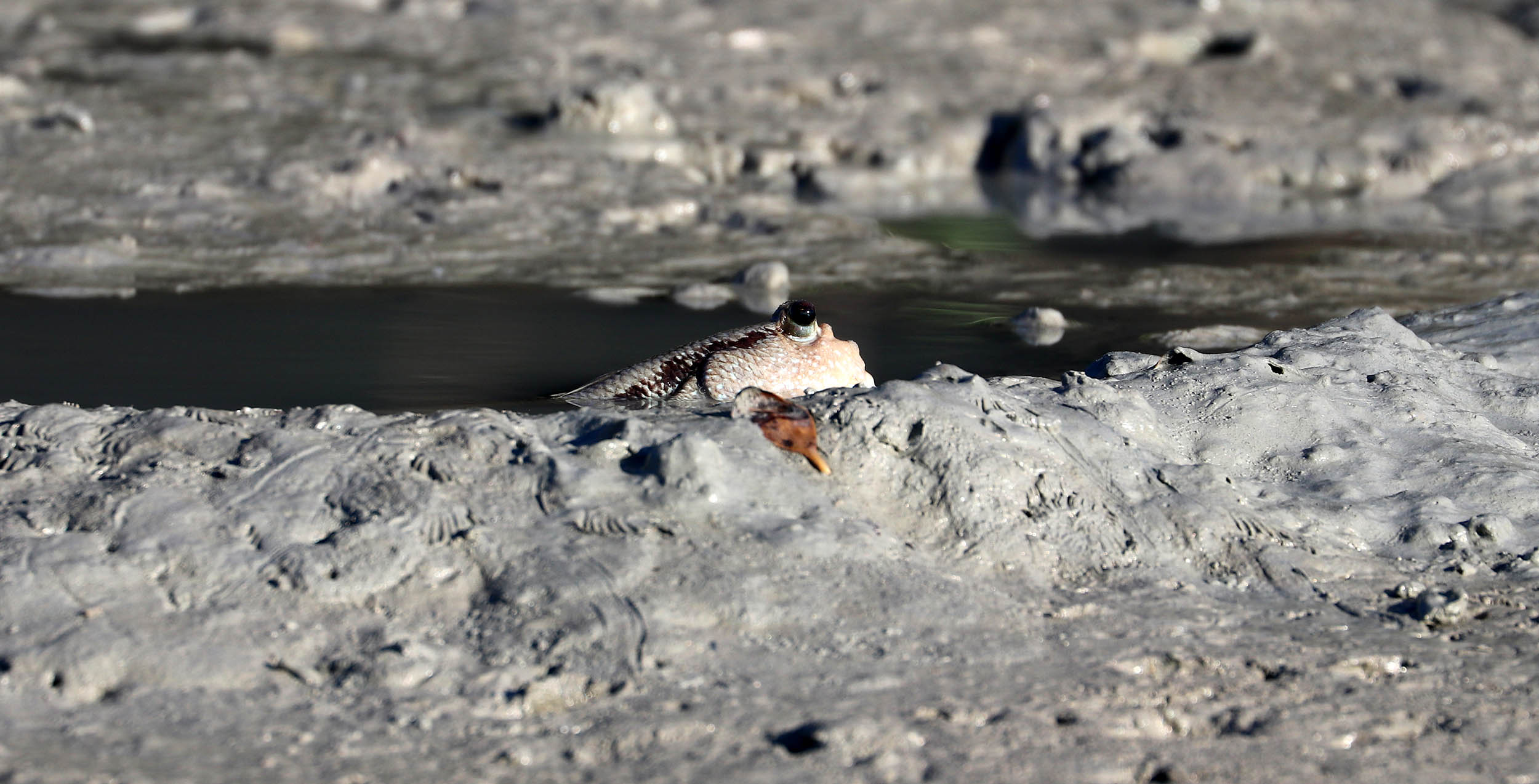 Mudskippers often set up and maintain territorial 'ponds', excavated circular pools in the mud. They can leap up from their pools of water in the mud to display to one another, jumping up to 60cm in height. They usually lay their eggs in a burrow. Because these burrows are often located in very low oxygen waters and soils, the fish take a pocket of air in the burrow. This has also been theorized as a preadaption that allowed mudskippers to evolve a lifestyle on the shore and out of the water. 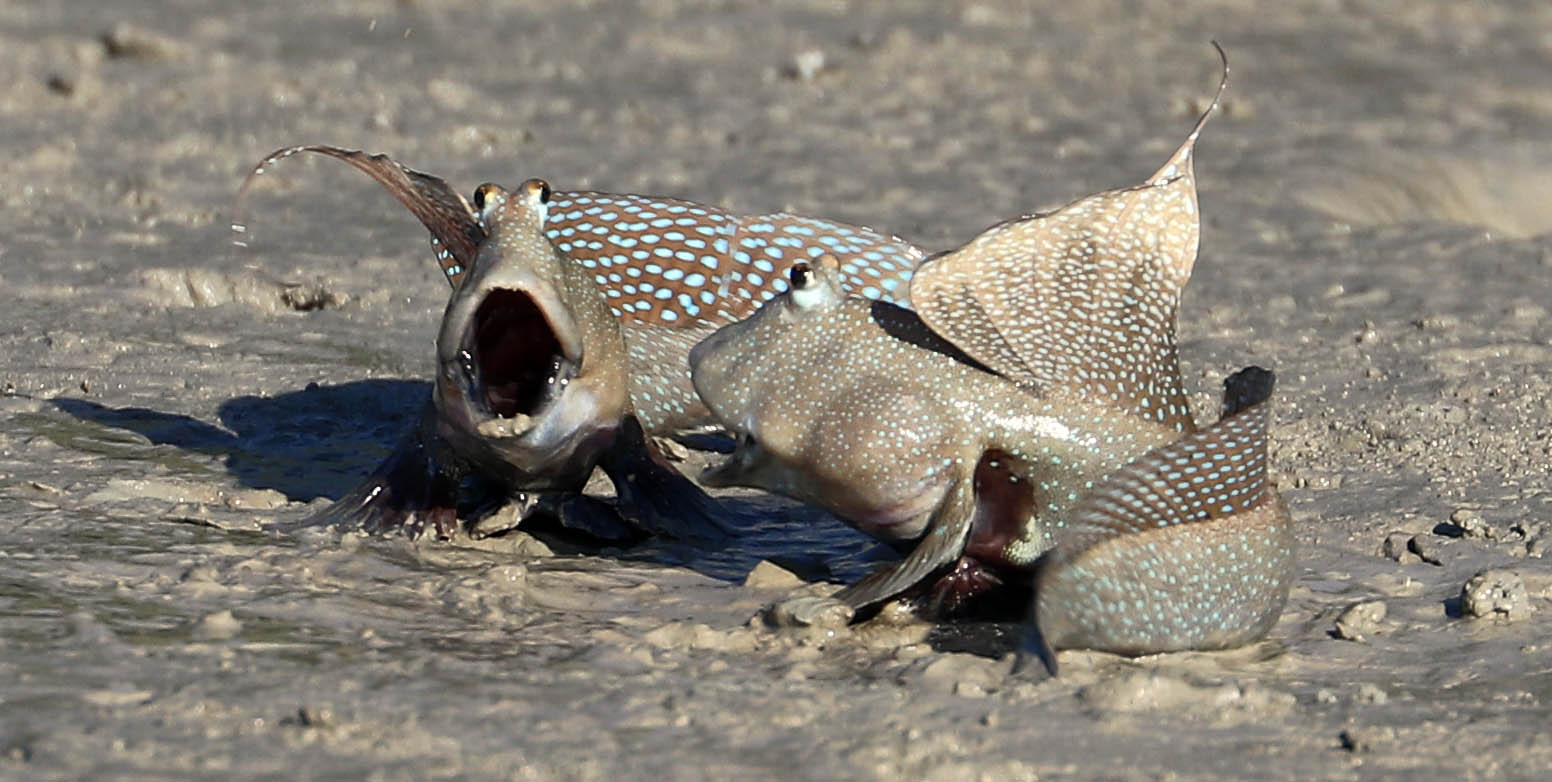 There are 5 species in this genus. They have comb like teeth for grazing on diatoms, cyanobacteria and green algae, which they feed on with a side to side movement. Males have territorial disputes by opening their mouths and pressing them against one another as if they are kissing. The males leap into the air to attract females, which they then invite into their burrows to spawn. 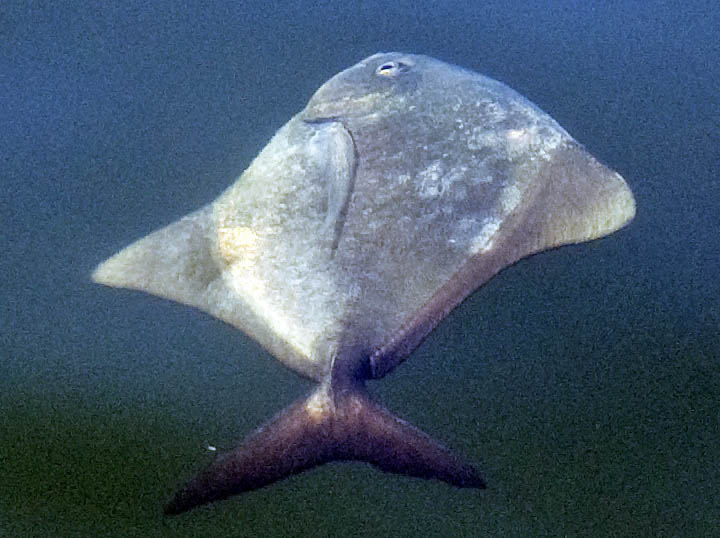 These fish are named due to their diamond shape and slivery glint. As they turn just near the surface, they often reflect the sunlight with their scales. They normally live around rocky areas or jetties in estuarine areas along tropical and subtropical coasts of the Indo-Pacific.

Crocodilians are an easily recognizable group with distinctive features. They are large and long, with relatively short limbs, thick and strong tails. Their long snouts are full of sharp conical teeth. While the internal genetic differences between species of different crocodiles and alligators have changed over evolutionary time, their external physical differences have not varied as much; this retention of form suggests that their ‘design’ is a successful one without need of modification. And they have existed in this general form for at least 200 million years. Despite their antiquity, they are often seen as one of the more advanced of the ‘reptile’ groups. For example, they have a 4-chambered heart, like birds and mammals in some ways, and unlike the other reptiles. They also show some careful maternal care of the eggs, and even the hatchlings for a short time.

Crocodiles use different senses to interact with their environment and detect prey. As they hunt mostly at night, their eyes are sensitive to light. As with many nocturnal animals, after light passes through the front of the eye, it is reflected back by a layer of guanine crystals in the tapetum at the rear of the eye, to allow light another pass. This also causes the orange-red ‘eyeshine’ of crocodiles when spotlighted at night. Crocodiles have sealable nostrils at the end of their snout, through which they can smell carrion. Their eyes and nostrils are often the only part of the animal exposed when they are in the water. They are also have amongst the best hearing of any reptiles, being able to detect a wide range of frequencies.

Back to the page on Australasian Mangroves