With at least 2,500 species of what we call ‘Palms’, this is one of the biggest and most recognizable of plant families. 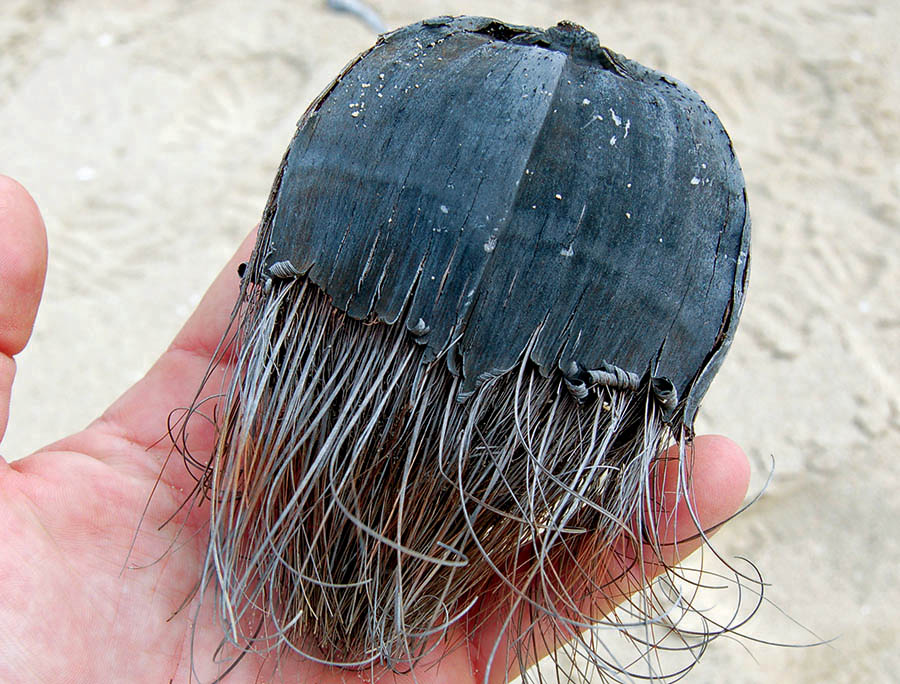 Nypa fruticans,  ‘Nipah Palm’, ‘Mangrove Palm’. Large but ‘squat’ palm tree growing out from thick base(s). Fruit is large and woody, looks somewhat like a Pandanus fruit, angular at one end, fibres at one end. Found mainly in mangroves in estuaries, often dominating in massive stands, mainly throughout tropical Asia, and into New Guinea, but also extends to a few spots in Queensland and the Northern Territory.

While different mangrove genera have evolved once or twice out of many different families, the family Rhizophoraceae is actually dominated by them. Most of the members of the family tend to have round, smooth, shiny, leathery leaves with a short point, and are bunched together at the end of the branches. There is often a long terminal stipule. Most species of Rhizophora, Ceriops, and Bruguiera produce the distinctive long cigar-like seedlings propagules.

Rhizophora are well known and recognizable mangroves. This is largely due to their often elaborate prop root systems. In other respects it is typical of the rest of the family in having shiny, roundish leaves bunched at the end of the stems, small flowers, and long seedlings that often begin to grow on the parent tree. 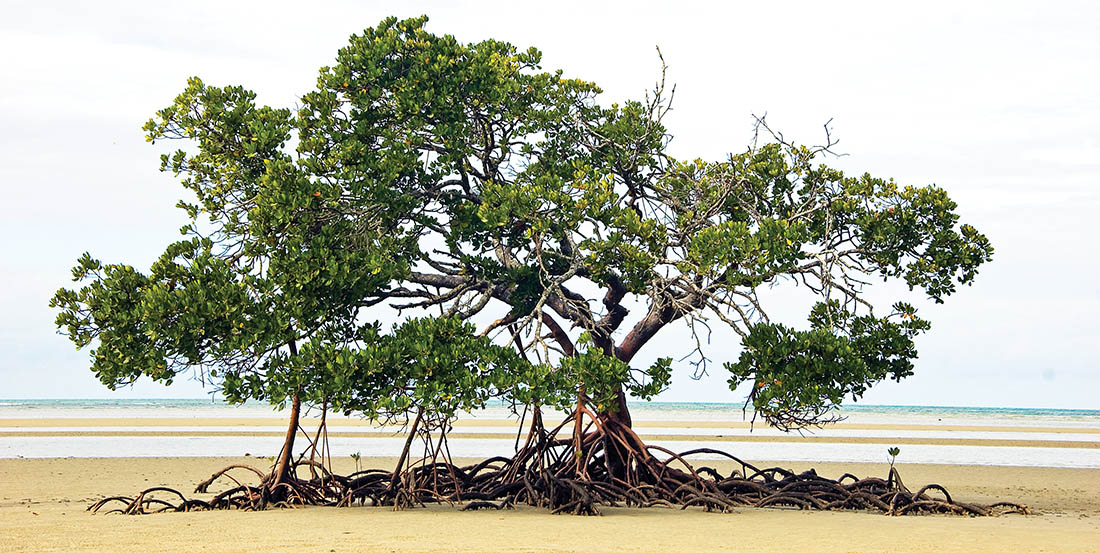 Rhizophora stylosa, ‘Red Mangrove’. Usually grows as a small tree. Common name comes from the reddish colour of the trunk and roots, especially when wet. Roots are long and spider like. There are often long stiff aerial roots growing down from the branches to the ground. 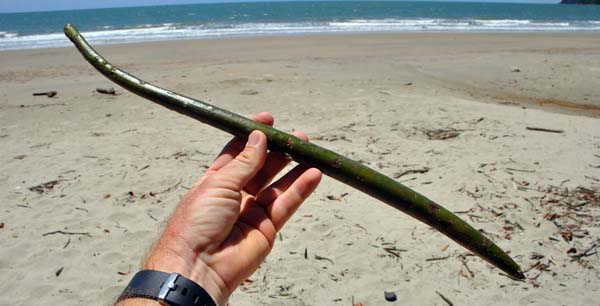 This family contains over 600 species, and are mostly herbs and shrubs. The petals are often held ‘scrunched’ up in the bud, and thus when they release they appear ‘crumpled’. 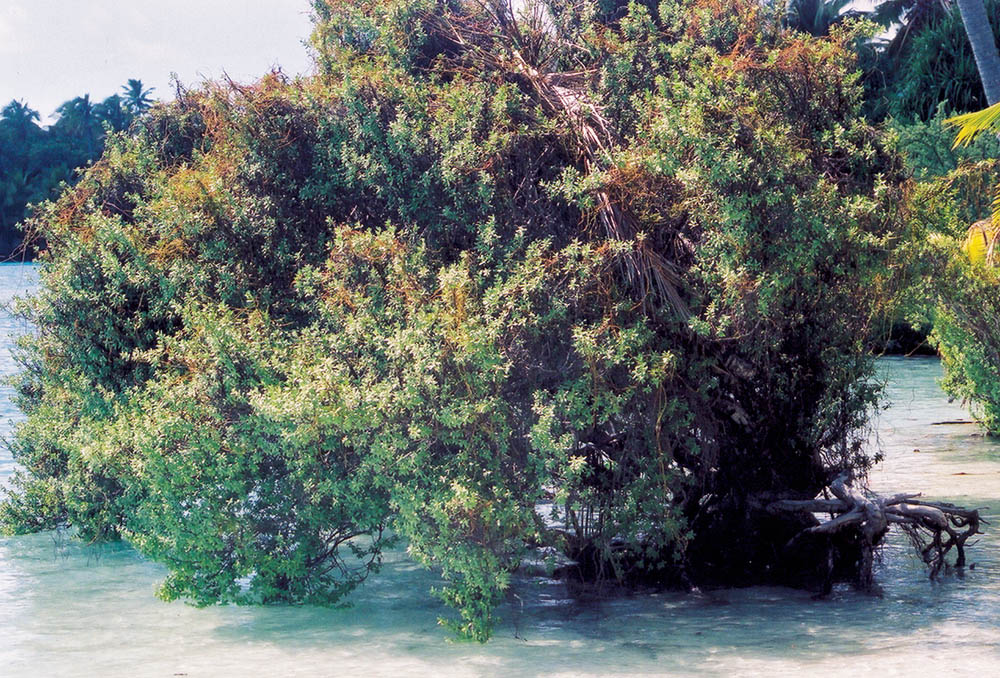 Pemphis acidula. Stunted growth, flaky bark and small leaves. Tree is usually fairly short and bush like. Bark is fissured and flaky or stringy. Leaves are small and rounded with a small rounded tip. Flowers are small and white, with the quite separate petals having pointed tips, and there are small yellow stamens in the middle. Fruit is small and woody. Often referred to as a ‘mangrove’, but probably more often seen on beaches rather than inside mangrove communities. Found throughout much of the tropical Indo-Pacific, from eastern Africa to Polynesia. 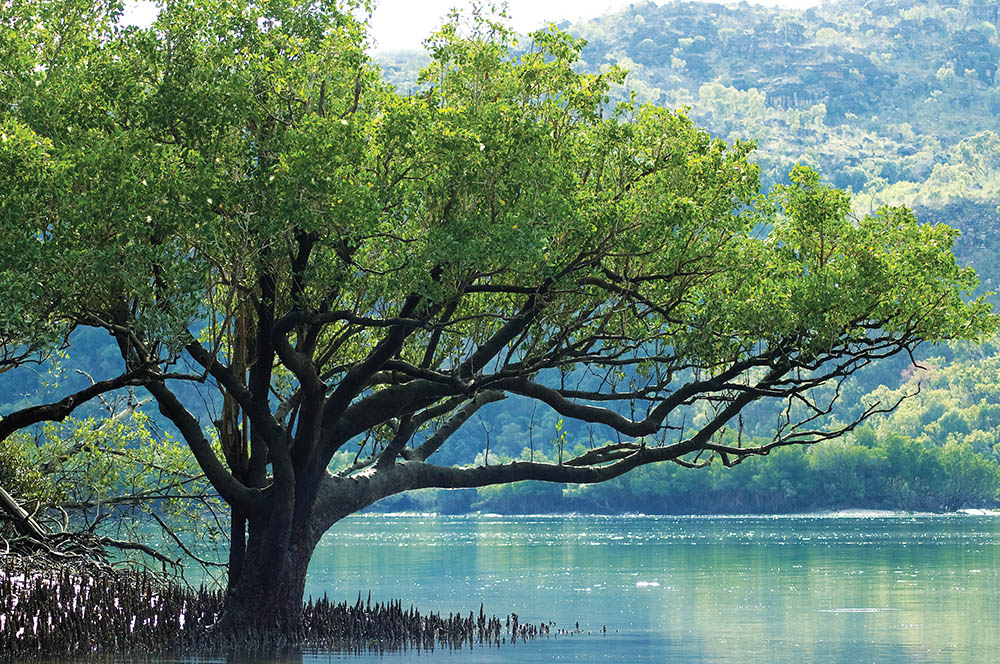 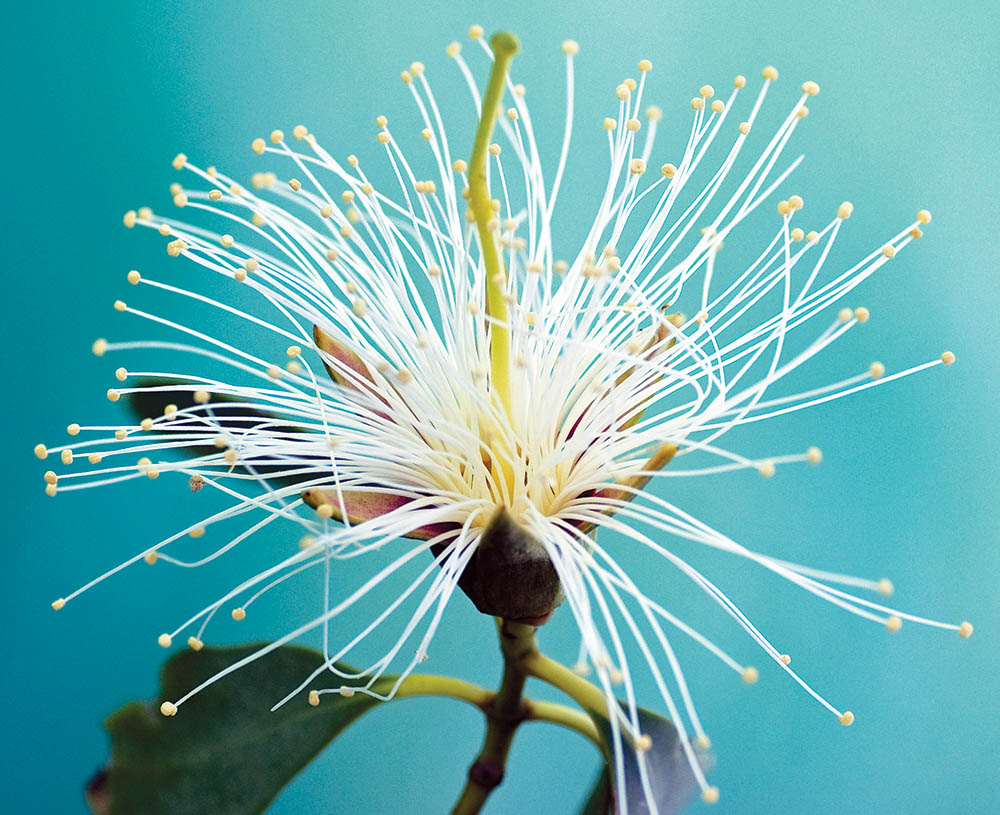 Sonneratia alba, ‘Apple Mangrove’, ‘White Mangrove’. Tree, with rounded apple tree like structure. Flowers are large with many showy white stamens. Fruit is green, dispersed by the sea, and reported by Brock (2001) to be edible. Normally grows in muddy estuarine situations within mangrove communities.

While the large family Myrtaceae is arguably the most important in the Australasian region, there are only a handful of species along tropical seashores.

This genus contains only the 1 species. 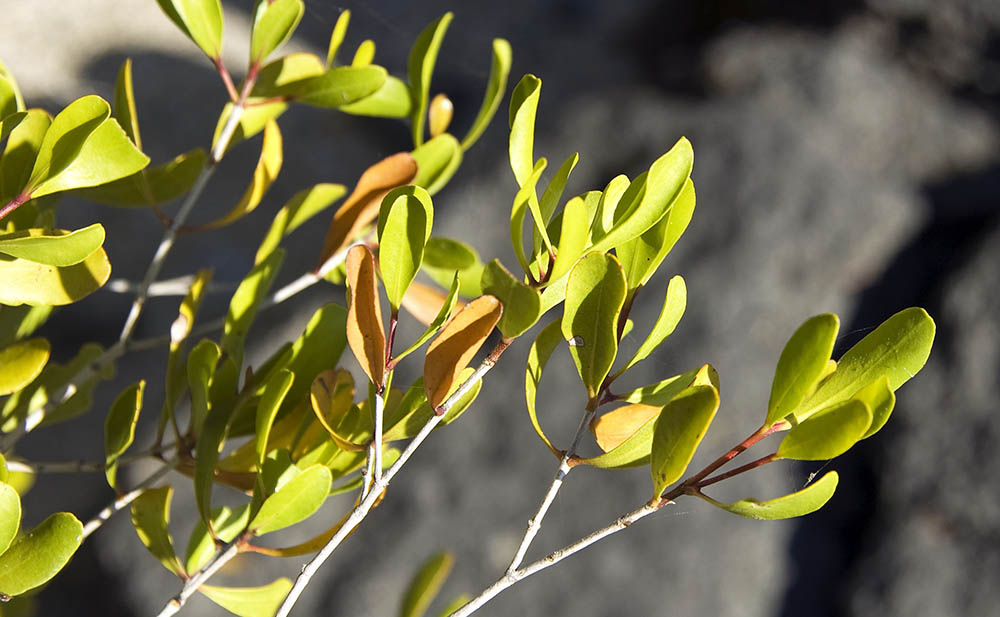 Osbornia octodonta, ‘Myrtle Mangrove'. Usually grows as a shrub to small tree. Small rounded, light green leaves, in opposite pairs, with distinctive red stems, unlike any other mangrove. An even more distinctive feature is that when the leaves are broken up, they have a ‘tea-tree’ small. Small white flowers. Small, cup-shaped fruits. It is usually found in small numbers, mixed in with other mangroves, often on sandy beaches or spits. Distribution is northern Australia and through south-east Asia.

This family has some 600 species found throughout the tropics of the world, with only a few in temperate areas. Some species grow simple leaves, but many have compound leaves, commonly divided pinnately or binnately, with the leaflets being opposite and having terminal leaflets. The fruits often split open to reveal seeds with a colourful aril. The family includes some important timber trees, including various Mahogany and Cedar.

The leaves are compound with small opposite leaflets, with obvious yellow venation and dark thickening at the stem. The flowers are small and white or pinkish. These are followed by huge, round ‘cannonball’ fruits. They begin as large round green woody balls. They then turn brown and may break up (dehisce) into parts while still on the tree, or fall and explode into many pieces if they hit a hard surface below. 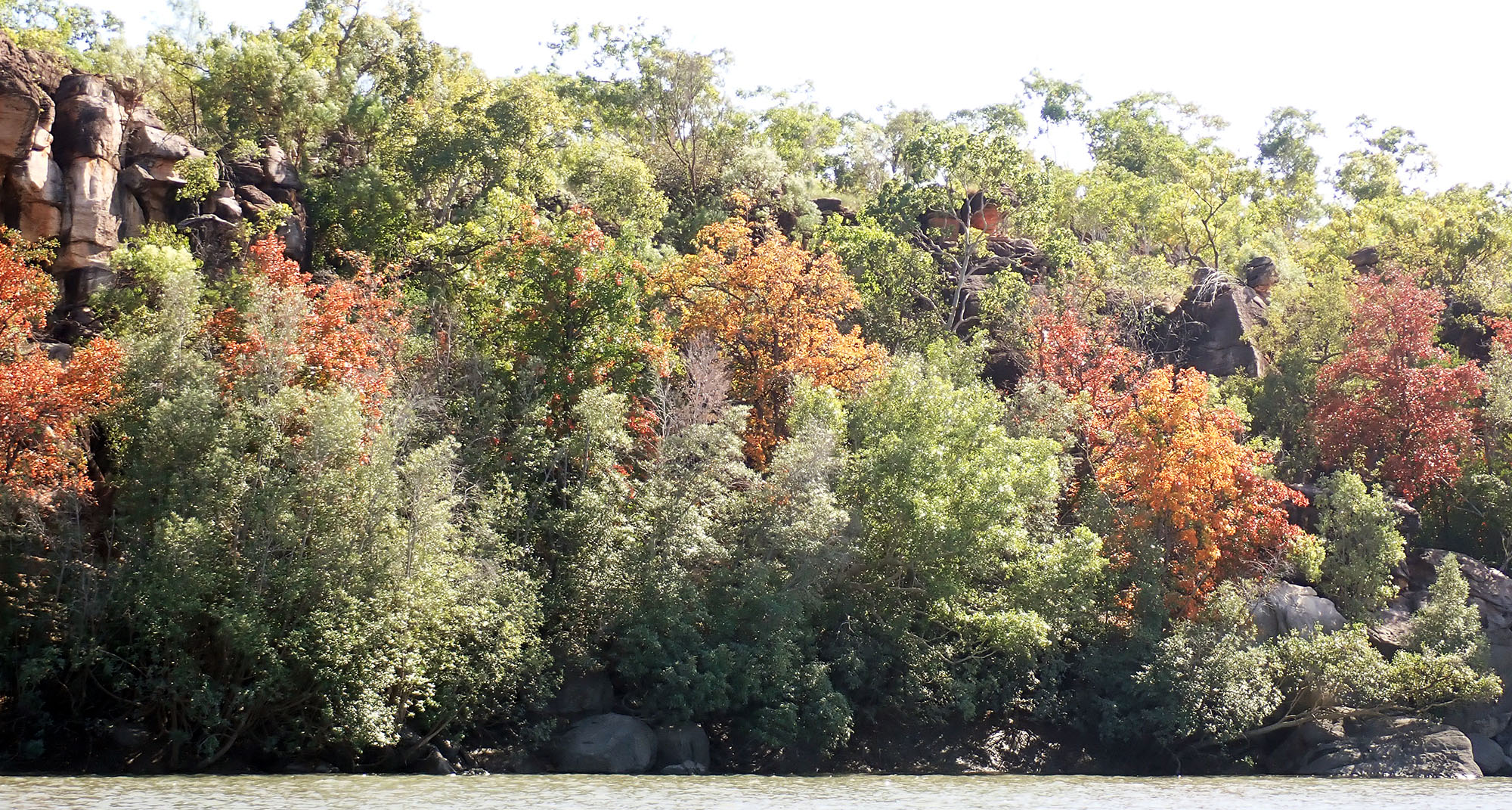 Xylocarpus granatum, 'Cedar Mangrove', 'Deciduous Mangrove'. The second common name refers to the habit of the leaves going distinct red-orange before falling off. The reddish colour is in strong contrast to the other consistent greens of other surrounding mangrove species.

There are over 1000 species traditionally placed in this family, but as it now includes the previous families Sterculiaceae, Tiliaceae and others, it has two or three times that number. The most well known species in the original family are the cotton bush and the garden ‘Hibiscus’. The two following similar looking species are among the most common plants along the tropical Australian seashore: Thespesia populnea andHibiscus tiliaceus. Both species occur in the same beachside habitat, and have similar heart shaped leaves and large flowers with overlapping petals. However, leaves of the Hibiscus are paler underneath and much more developed lobes, and the flowers have protruding red tips from the top of the central column, which Thespesia lacks.

This genus has about 7 species found throughout the old world tropics of Africa, Asia and the Pacific.

Heritiera littoralis, ‘Looking Glass Mangrove’. Mangrove tree with a distinctive white-grey pale trunk. Usually develops winding, ribbon-like buttress roots. Dark green leaves are a distinctive pale silver colour underneath, thus supposedly resembling a ‘looking glass’ mirror. Fruit is a distinctive large oblong woody pod with a ‘keel’; however, as the fruit floats with the keel up, this acts as a sail. Wide range; found in mangrove habitats throughout the tropics of Africa, Asia, Australia and the Pacific.

This family has about 1000 species found throughout the warmer parts of the world. The flowers are often arranged in umbels. The stamens are located opposite the petals. The following fruits are usually fleshy with one seed. 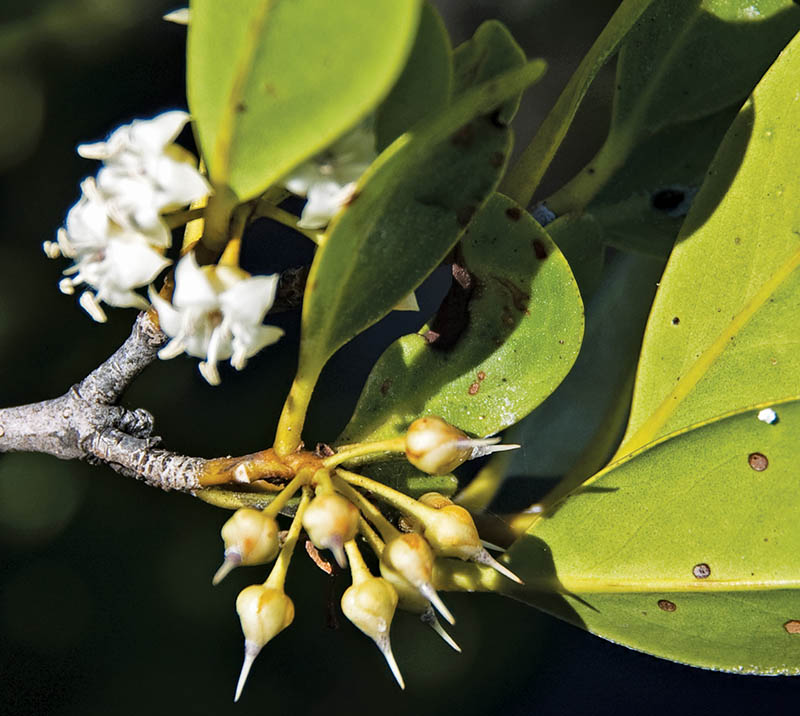 Aegiceras corniculatum, ‘River Mangrove’. Usually grows as a small tree or more commonly a shrub. Flowers and fruits in an umbel. Flowers begin with pointed buds, then open up to reveal small white flowers with strange smell. These develop into curved horn-like fruit. Often found on beach sand, such as on spits, on the edge of mangroves. Found across northern Australia, and throughout tropical Asia. 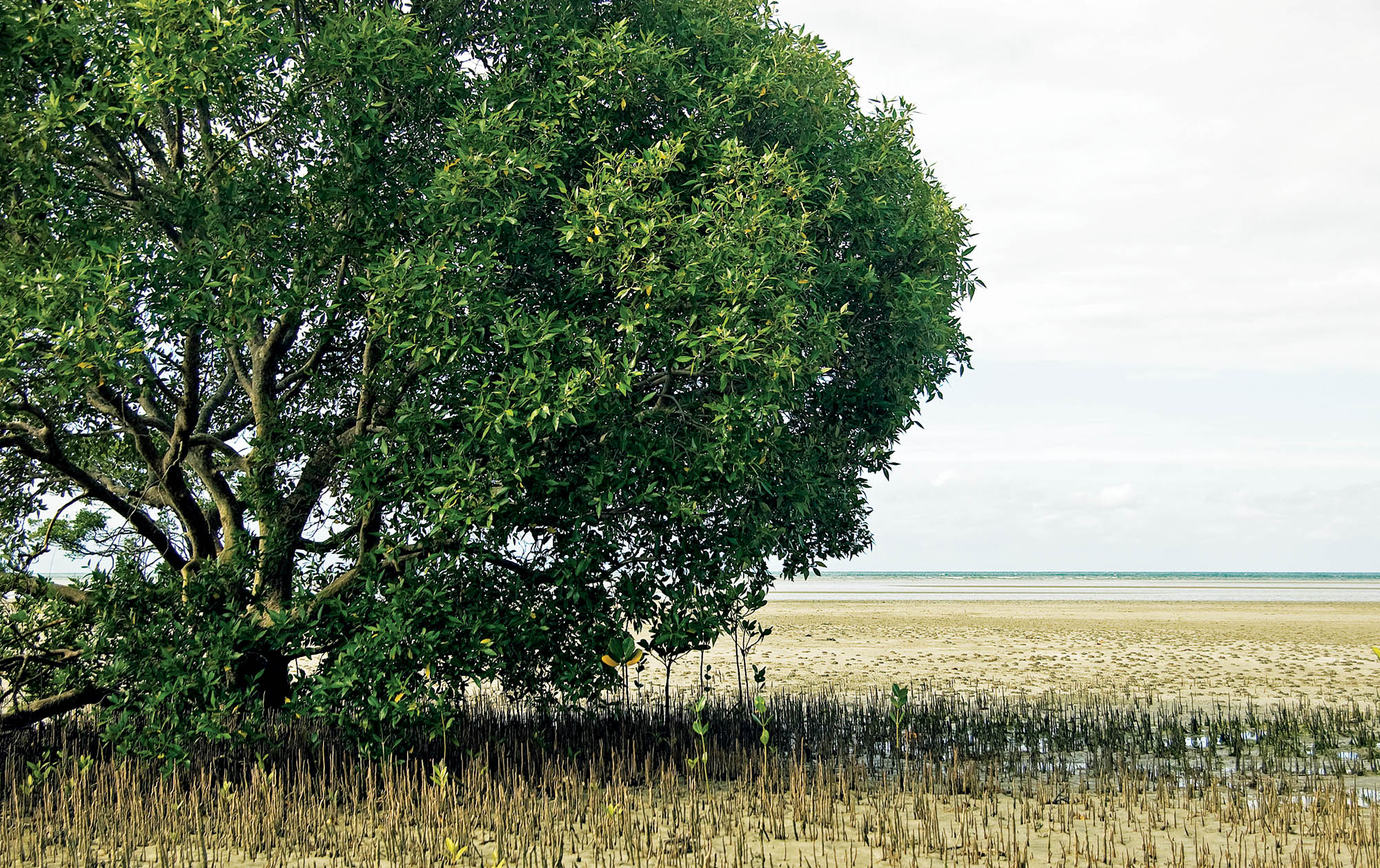 Avicennia marina, 'Grey Mangrove', 'White Mangrove'. Tree with light grey slightly flakey bark. Dull green leaves that exude salt from underside; this can be tasted. The roots spread out laterally and grow stick-like projections through the mud. Found along coasts in the Indo-Pacific; found as far south as New Zealand.

Back to the page on the Australasian mangroves