I visited this area a few years back specifically to swim with whale sharks, and have returned since with two different expedition ships.

Donsol is located in the south east of Luzon, the island in the Philippines that holds the capital Manilla. Donsol is one of the cheapest, nicest and reliable places in the world to see whale sharks...

You have to go at specific time; this is definitely seasonal. I went twice in late february. The first time it was a nice day, and we jumped in at least 5 times to get at least good 3 good views. I went back the next day, and we saw none! The driver was telling me last December they went weeks without getting good views. So it is always a good idea to budget at least a few days there to cover yourself. It is relatively cheap (1000 pesos a pop; which is 25 bucks) so you can just keep going if you have time.

Put aside some time just in case...

There are other things to do in the area and as there is no guarantee to see the beasts, it might be a good idea to have a few days planned with other activities in the afternoon and at night. There are tours to see the river fireflies, other scuba diving, and the Mayon volcano.  And the beach hotels are a good place to chill out... 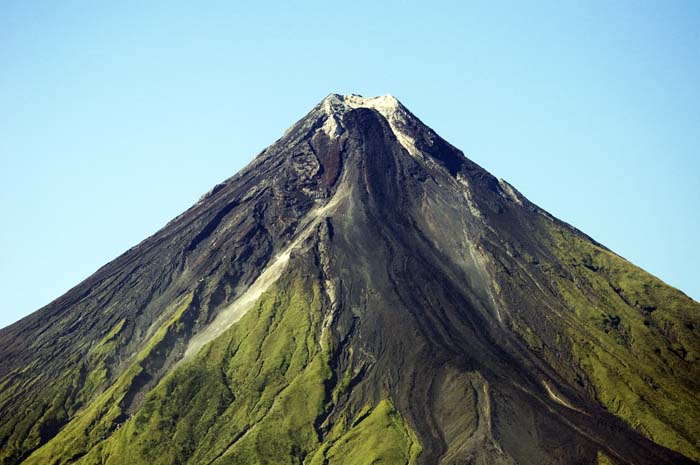 There is a 300 peso fee and you turn up at the whale shark centre about 5 minutes drive out of town, fill in a form, watch a video, and the staff will arrange you into shared groups for the boats. Each boat is 4000 pesos or so, so with 5-6 in a boat, that is about 700 each. So it is a grand total of 1000 pesos and you have three hours looking for whale sharks.

It gets pretty crowded out there, so best to turn up at 7am and get out quick. The boats are limted to 3 hours. Do not touch the whale sharks; if you get caught, they send the whole boat back early! (it happened to a boat I was on once) 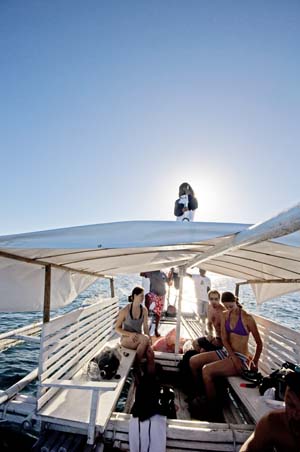 I was the oldest passenger on this boat.

the boat drivers have spotters, and they try to get ahead or parallel with the whale shark... 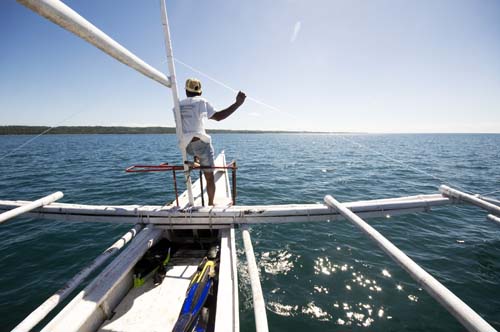 You put your gear on and sit on the side of the boat... 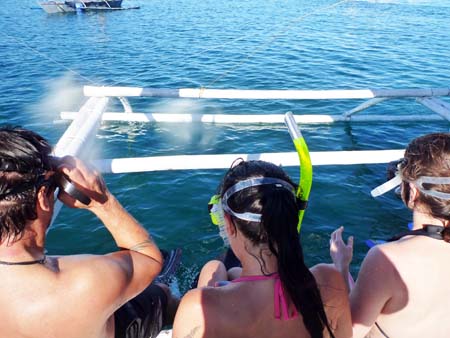 "Jump in!" they yell and you fall into the water, and try to follow the guide, they can see them when they are deep down when you can't, and they will keep on following.

Don't forget to get to know the name of you boat, so you can find it in amongst the other dozen boats that will turn up there... 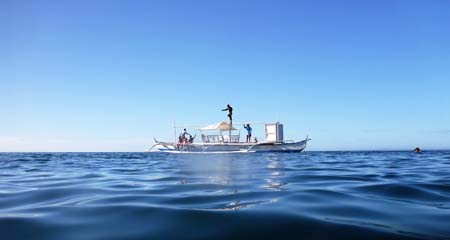 This is a challenge! First of all, even on a sunny nice day, the water is not clear, they do not live in crystal clear waters here. You can take photos from just above the whale shark. (Don't worry, it is a fish, not a mammal, so it doesn't have to surface to breathe,) but they do go pretty fast! (as you can see from the streaks in the water alongside the shark in the image below) and you will end with a picture of a head. 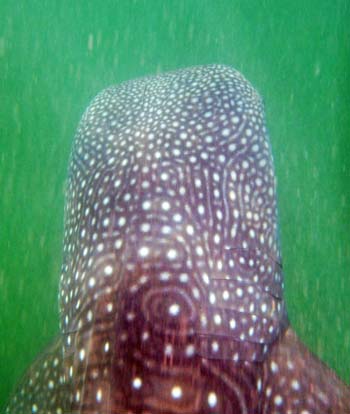 But it is better to get a bit ahead (it is tricky to try and predict where it is going..) and duck dive down and try to get a shot head on. If you get a snorkeller in the shot, then that is good for scale..I found even better was duck diving down to be on the side of the whale shark... 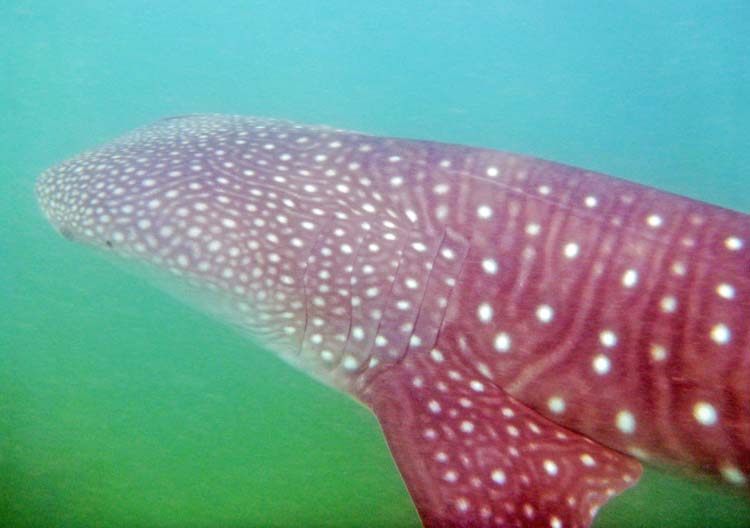 It takes a little time to get out to the whale watching spot. From Manila you can get a bus, but this apparently takes some 12 hours, which isn't much fun. A more efficient option, and I suspect probably cheaper, is to fly to the closest airport, which is Legazpi. From there you need to go another hour and half, either get a taxi to the bus station and the a cheap bus, or just be lazy (like me) and get a taxi  all the way to Donsol, which costs about 1500 for your own car.

You can stay in 'town', where there are several hotels,but I found it nice (especially after the hectic noise of Manila) to chill out at the hotels near the whale shark centre. There are a couple of nice hotels along the beach which are relaxing; the cheaper Duncalan Beach Resort and the slightly more expensive Viton resort, both of these are right next door to the whale shark centre, have their own restaurants and access to the beach. The beach is brown sand, and not for snorkelling, but OK for a dip. Town is only a 5 minute bike ride away. You can hire snorkelling gear at the various hotels, the whale shark centre,or you can bring your own. I have heard that they do run out on busy days.

other places in the Philippines...