Until recently, this family was previously included within the larger more widespread Hylidae. They are found across Australia and New Guinea. There are over 88 species found in the former region.

Ranoidea (formerly Litoria)cavernicola, 'Cave-dwelling Frog'. Medium-sized green frog. Distinguished from similar and overlapping distribution of 'Green Tree Frog' and 'Splendid Tree Frog' by having much more granular skin, and a lack of large glands and folds around head, and lack of sulphur spots on back. Found mostly inside caves and around sandstone country, occasionally on vegetation around rocky escarpment. Endemic to the Kimberley region of north-western Australia.

Dragons are found from Europe, to Africa, Asia, Australia, and the south Pacific. There are some 70 species in Australia, and there is a high diversity in the tropical woodlands of northern Australia. Most dragons have large angular heads, sometimes with flaps, spines or frills. They have long bodies, strong hind legs and long toes, and very long tails. They generally have an upright posture and some species can run quickly on their hindlegs when alarmed.

The largest group of dragons in Australia, most associated with arid areas. 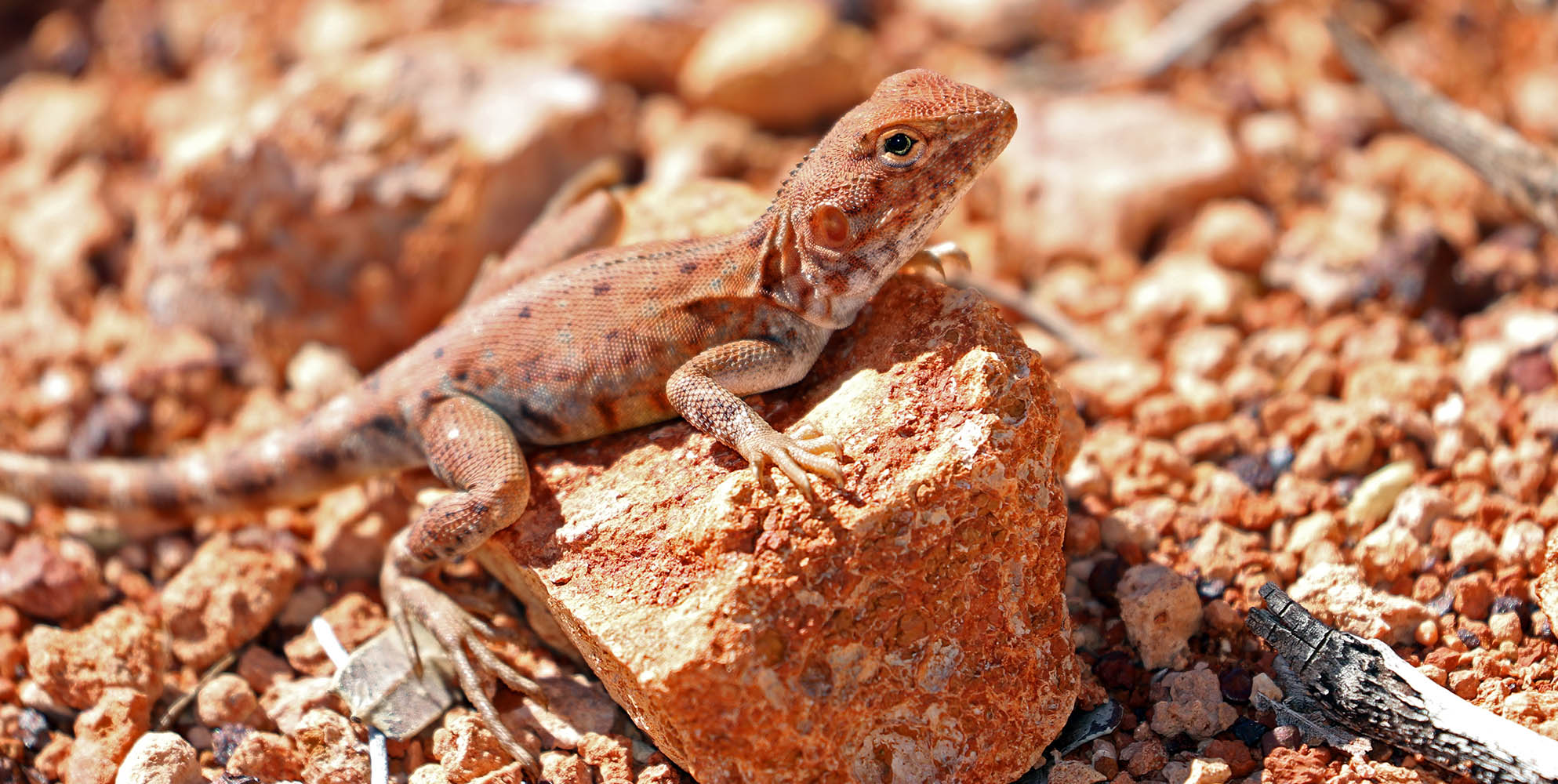 Recently some of the species in this genus have been moved around; currently there are two species. They are one of several Australian dragons known as 'Ta-Ta' Lizards because of they way they signal with their forearm, lifting it up as a sign to other dragons. 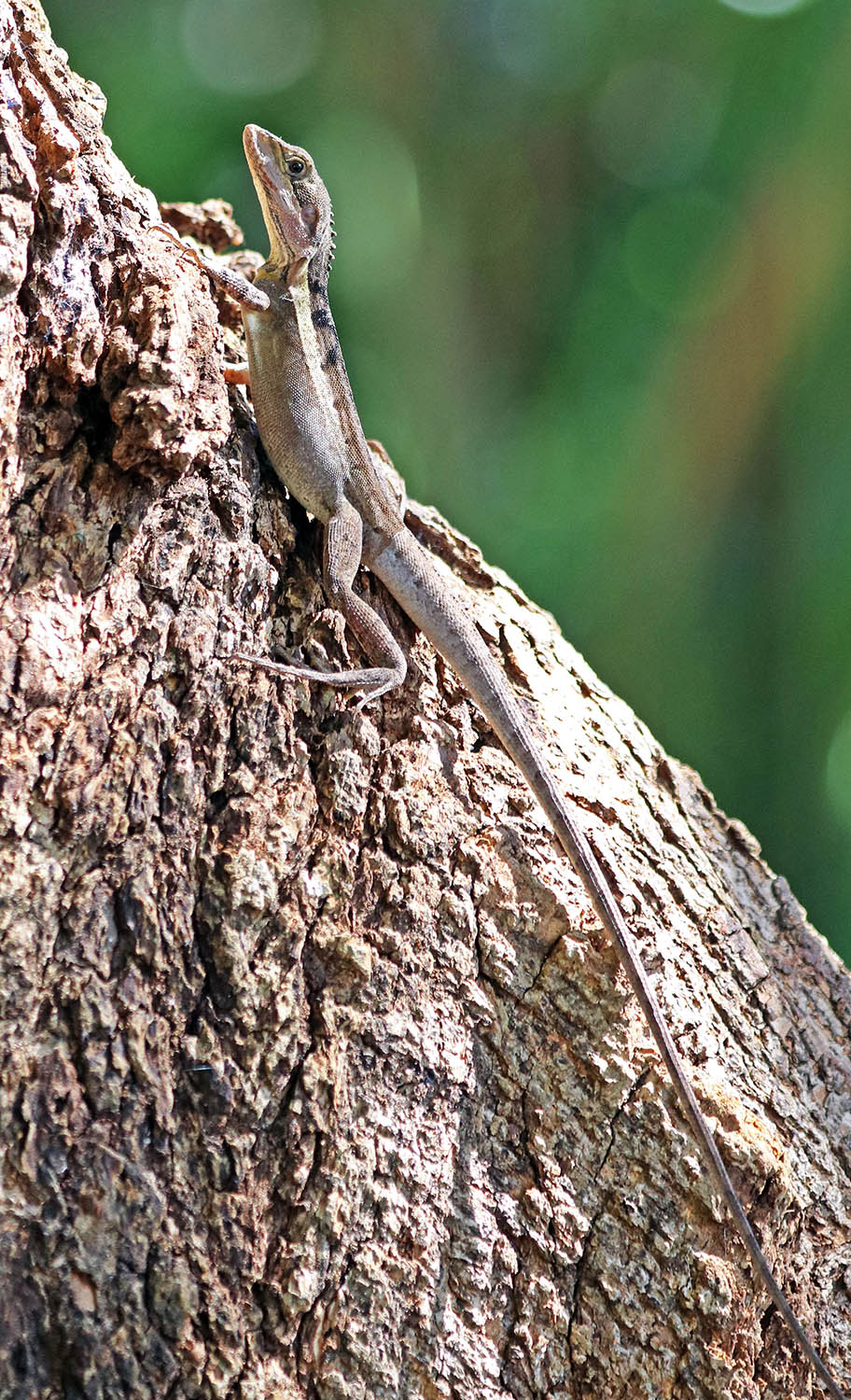 Lophognathus gilberti, 'Gilberts Ta-Ta Lizard'. This is the common species of 'Ta-Ta' Lizard around the suburbs of Darwin.

Lophognathus horneri, 'Horner's Ta-Ta Lizard'. This species can be distinguished from the former by the white spot in the tympanum.

This family includes the Komodo Dragon. There are species in this family found in tropical Africa and across Asia, however it is in Australia where there is the highest diversity. And within this region, there are more species found in the tropical woodlands than other habitats. 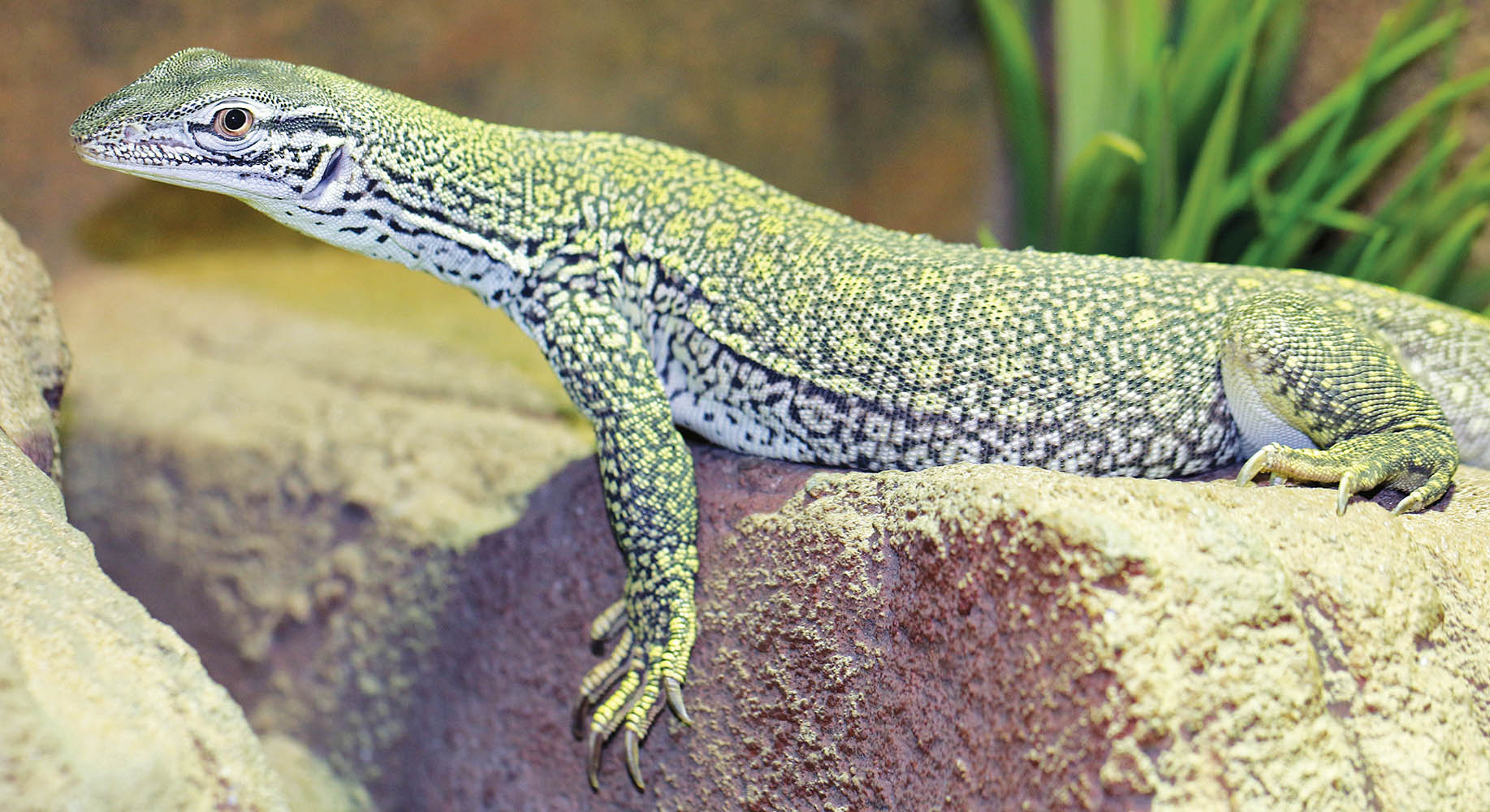 Varanus gouldii, 'Sand Goanna'. One of the most widespread monitors in Australia, found in many open habitats across most of the continent. 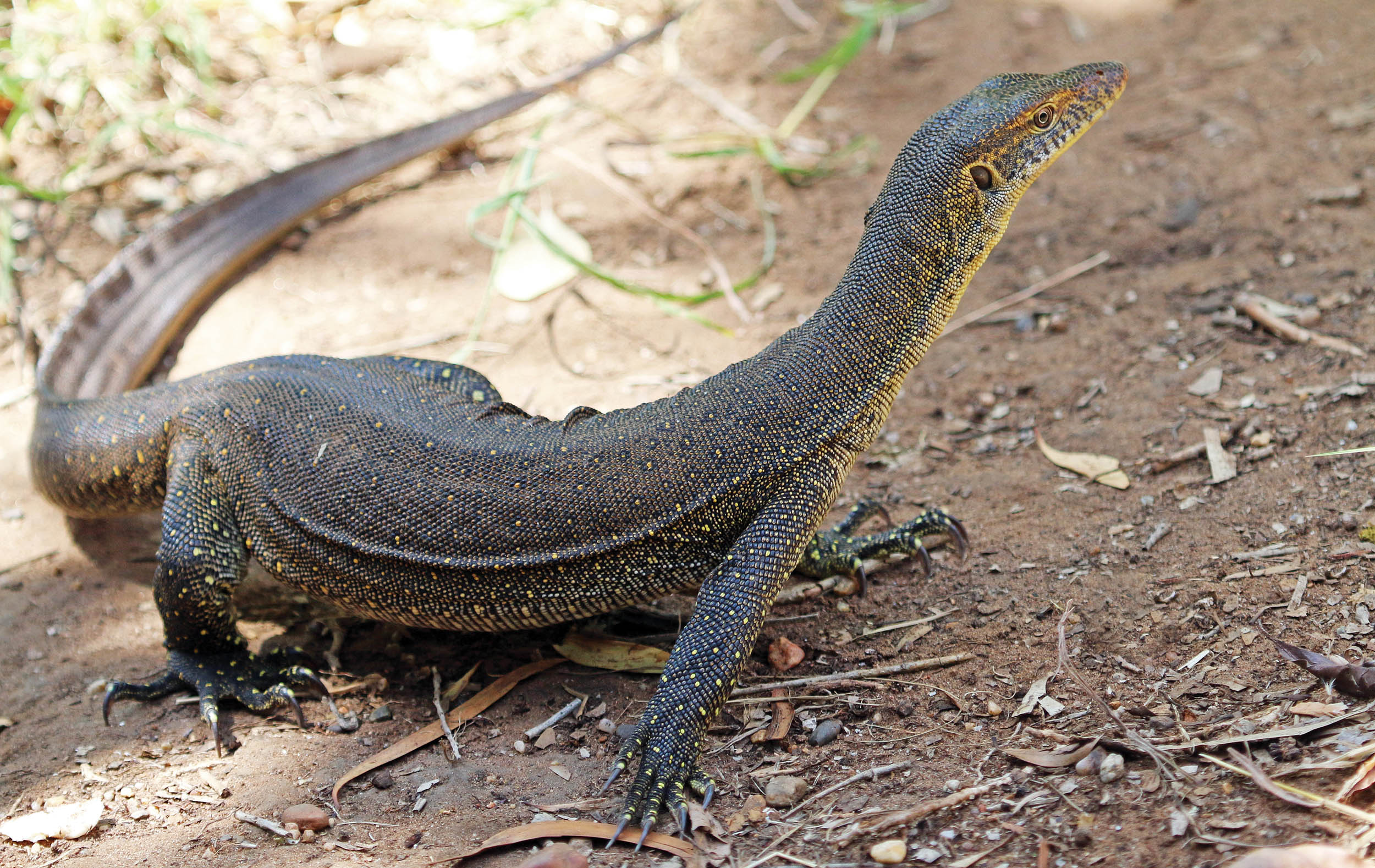 There are two species of Water Monitor found in Australia, and they can be found sunning themselves on rocks along the edge of freshwater. They have distinctive laterally compressed tails with a sharp ridge, shaped like a butterfly knife. This reflects their semi-aquatic lifestyle. The two species are 'Mertens Water Monitor' and ' Mitchells Water Monitor'. Based on its larger geographic range, the above image is likely to be the former. The latter species is now rare.

Varanus glauerti, 'Kimberley Rock Monitor'. Striking, with spots on back, stripes along tail. Medium but slight goanna with a 'squashed' flat appearance good for sliding in under rocks. Very long tail. Found around rocky habitats north west and top end of Australia. 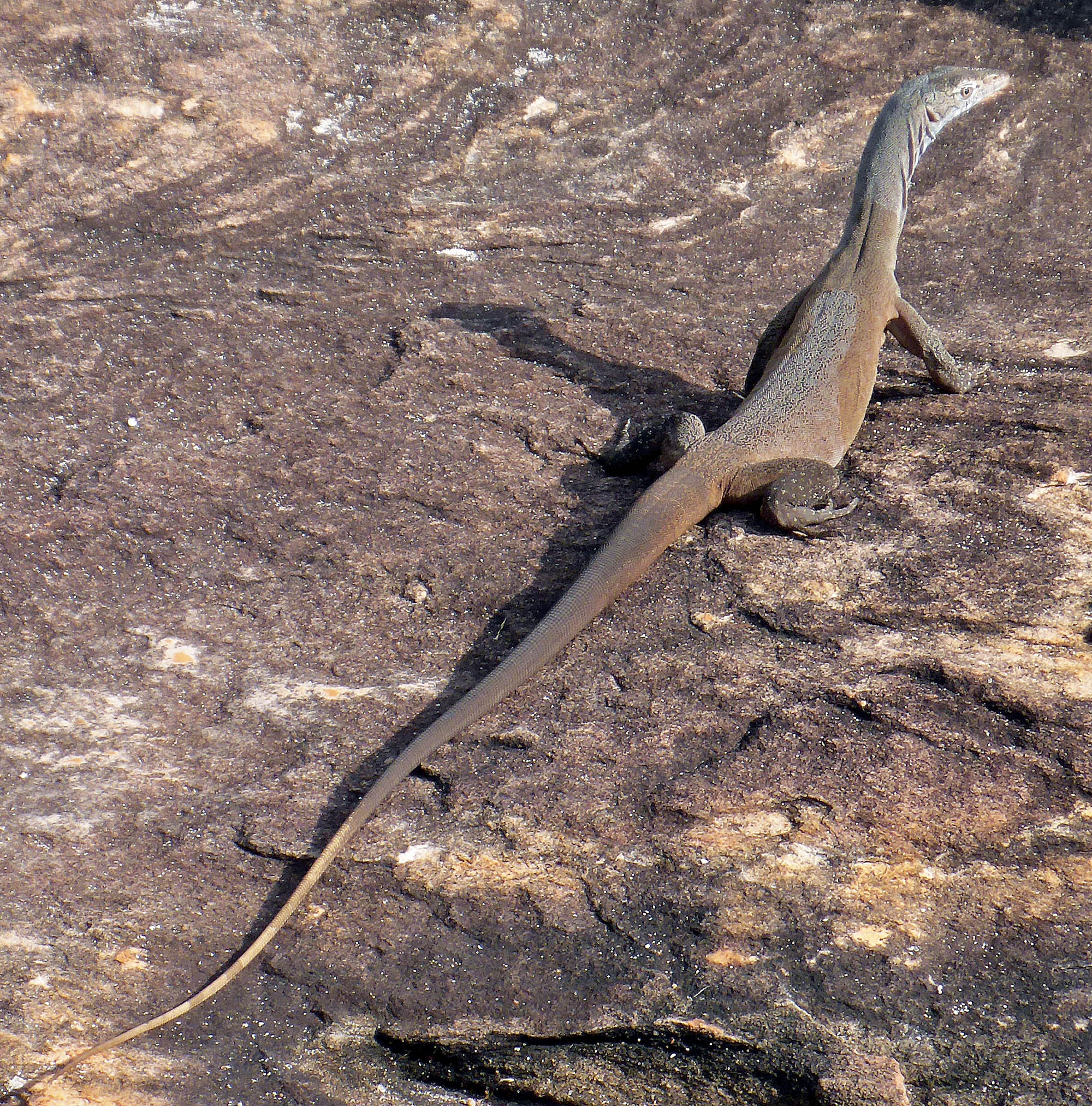 Varanus glebopalma, 'Black-palmed Rock Monitor'. Grey-reddish in colour, the long tail is darker upper half and whitish in lower half. The top of the limbs are normally darker with spots; the underside of the limbs are also apparently dark, thus the common name. Found around rocky habitats across northern Australia. 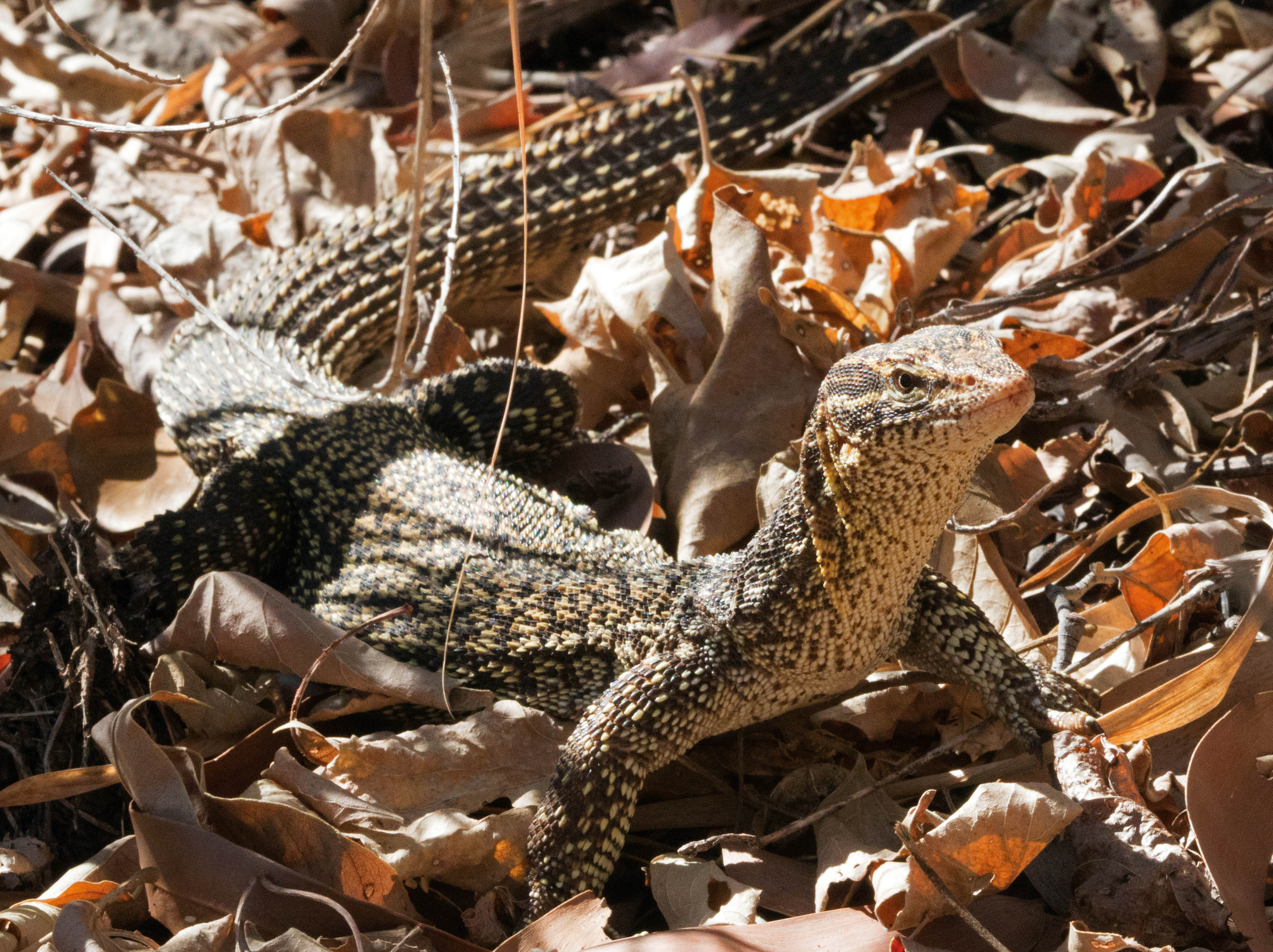 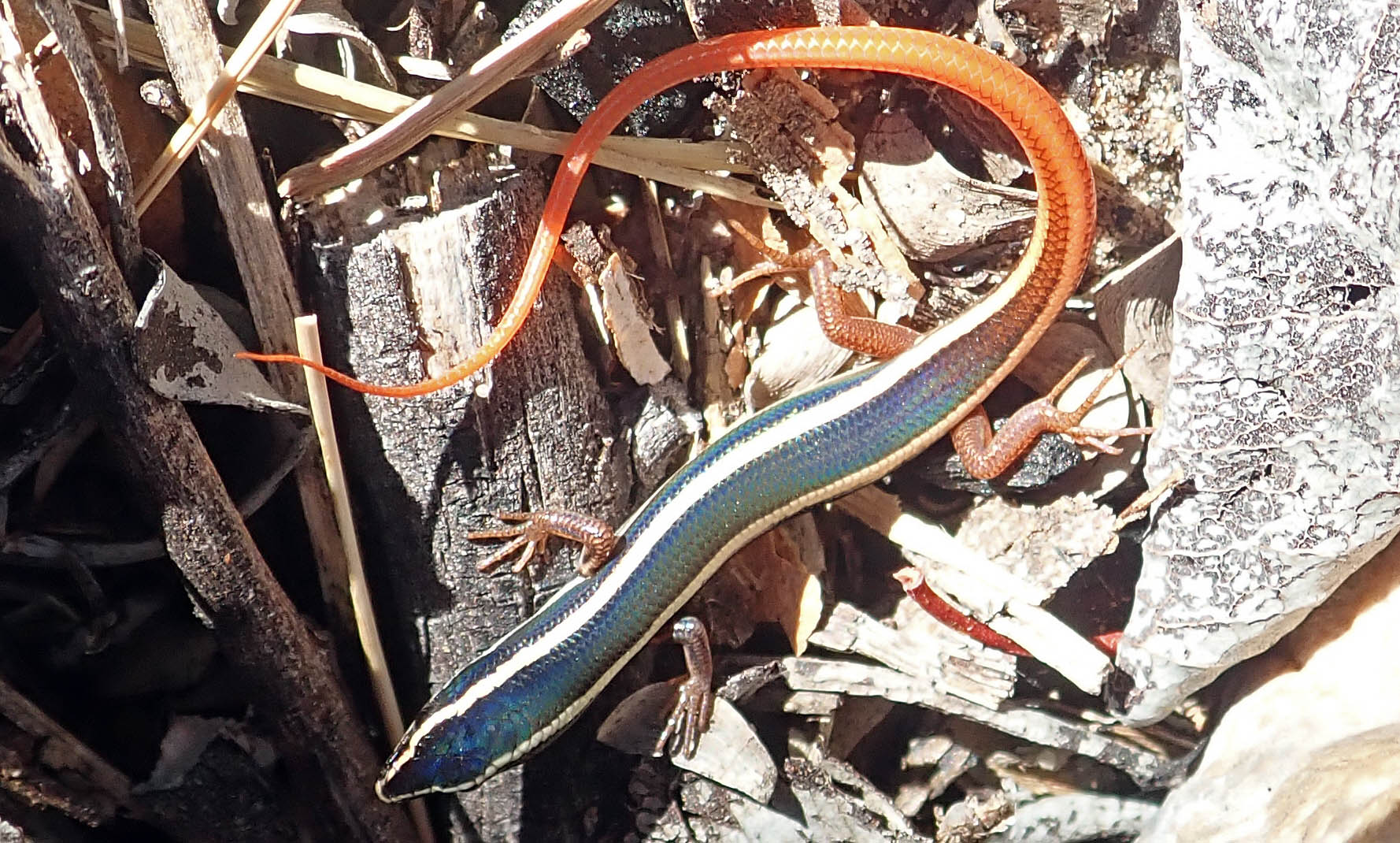 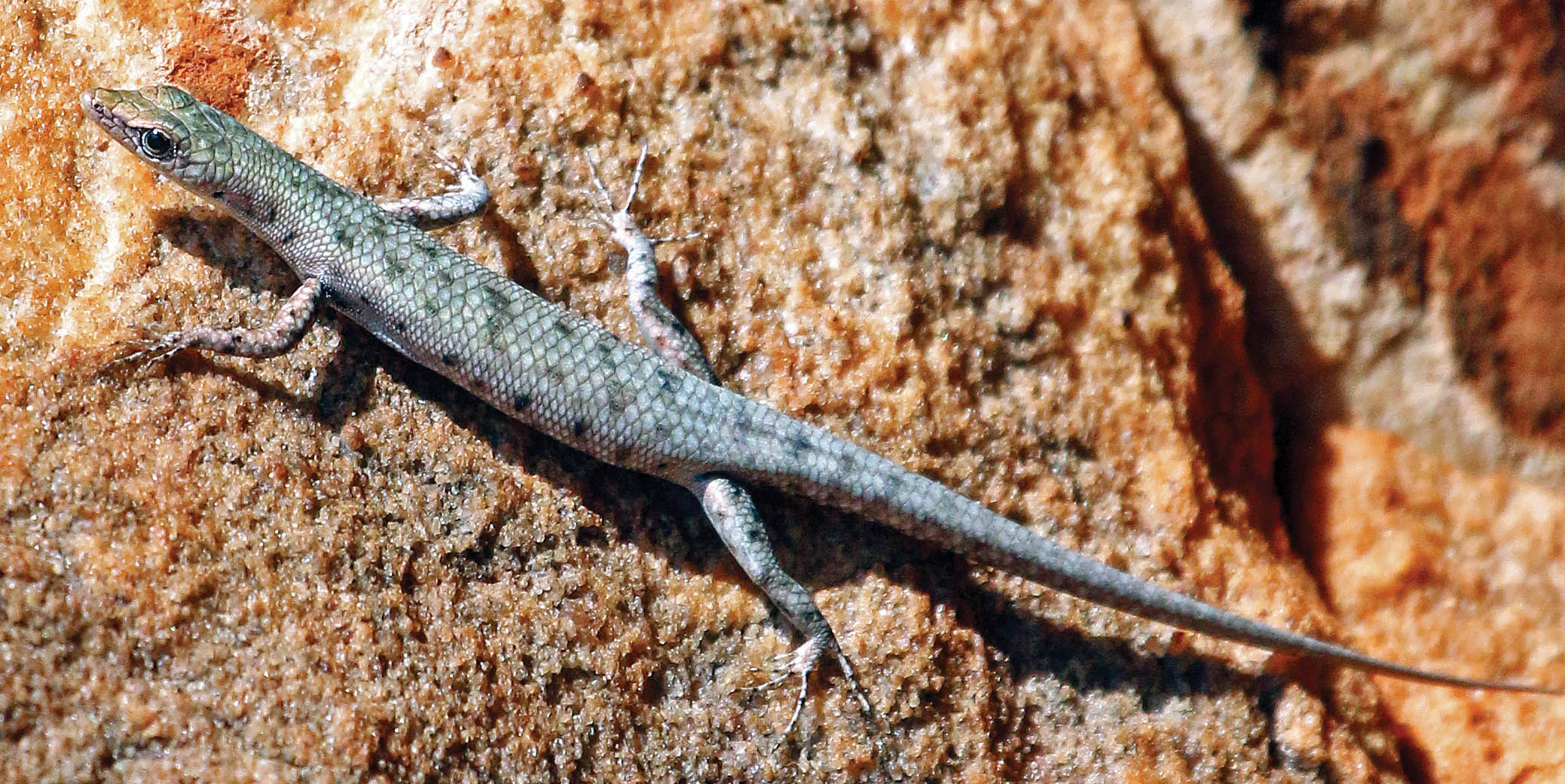 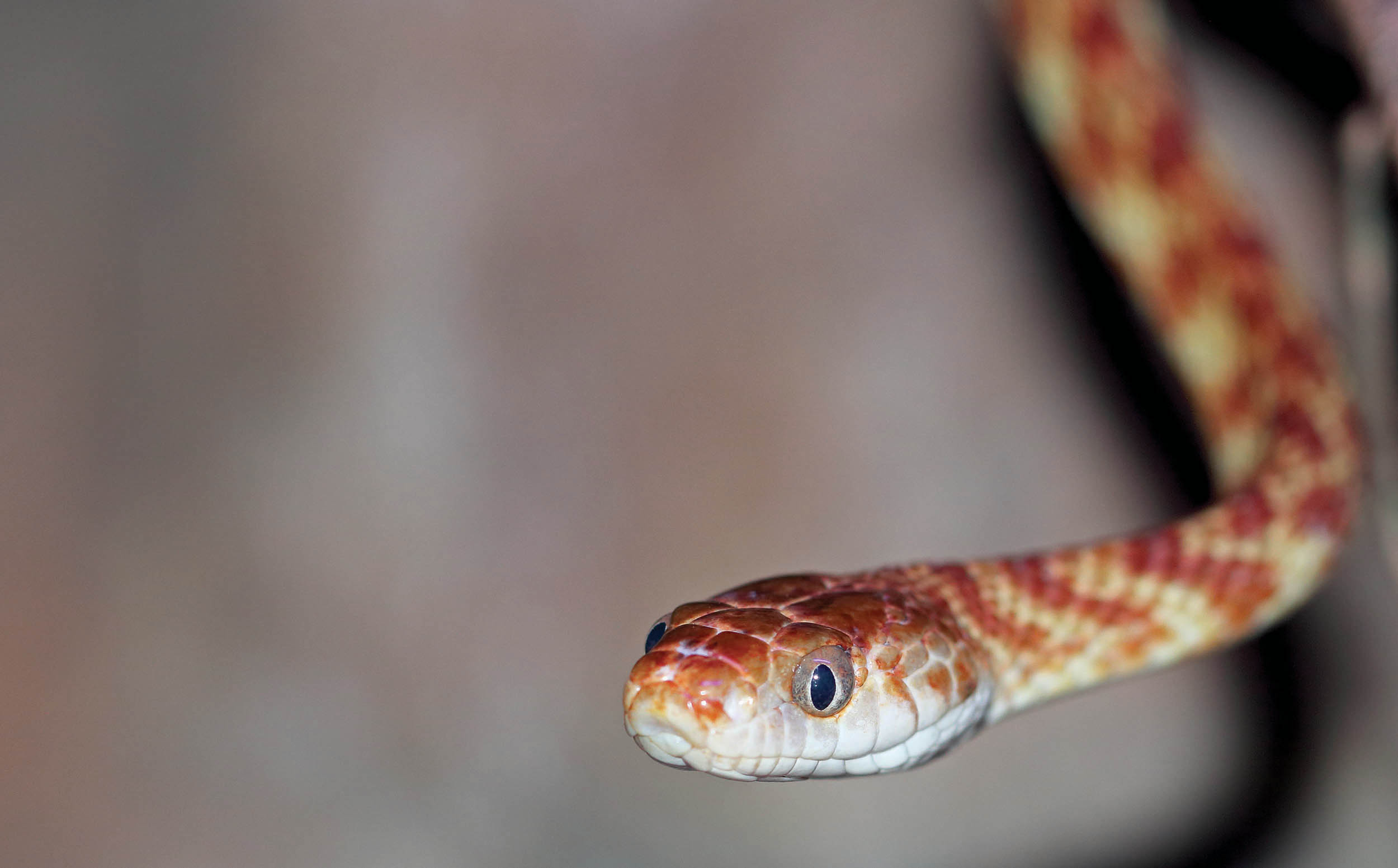 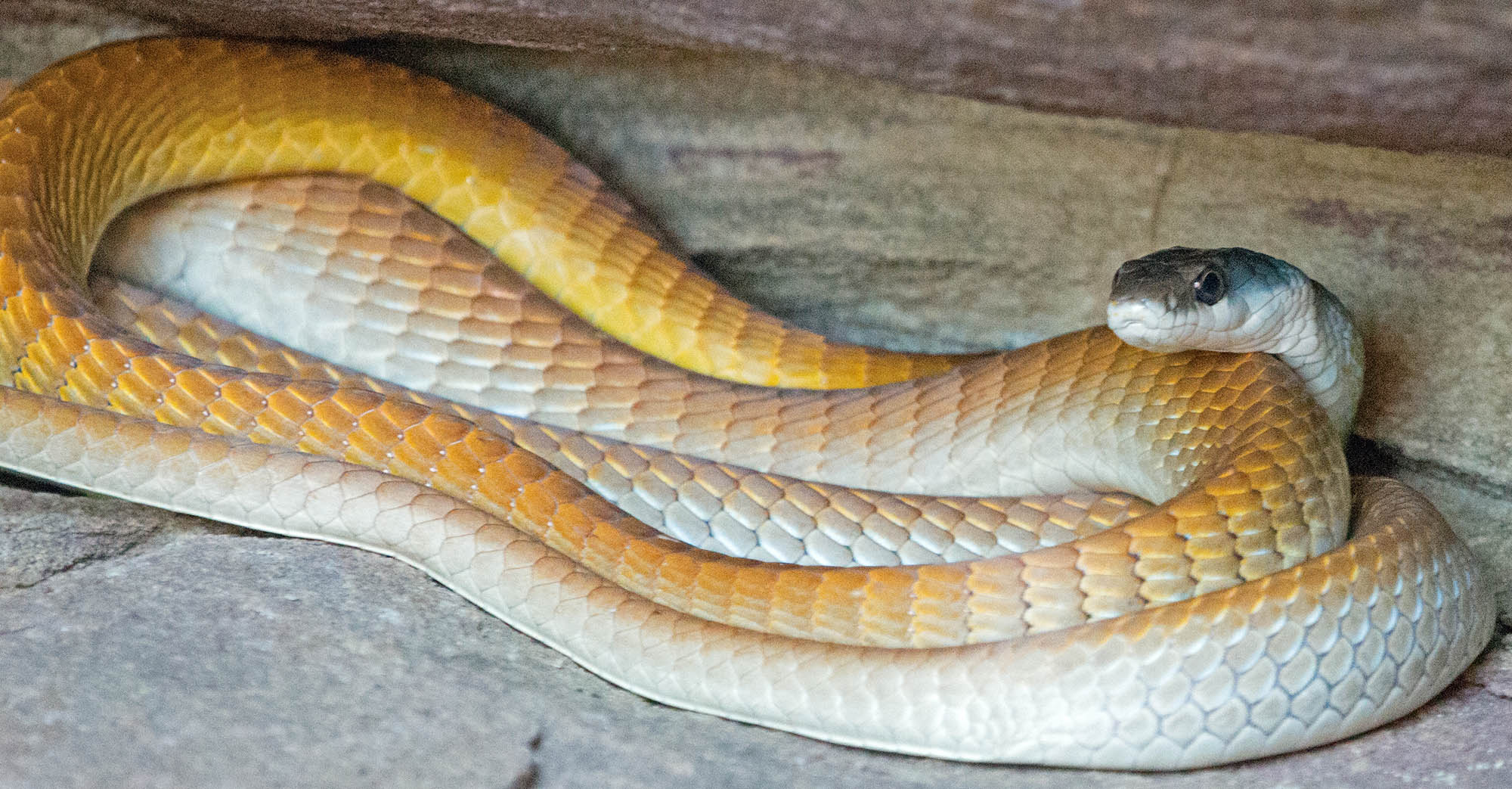 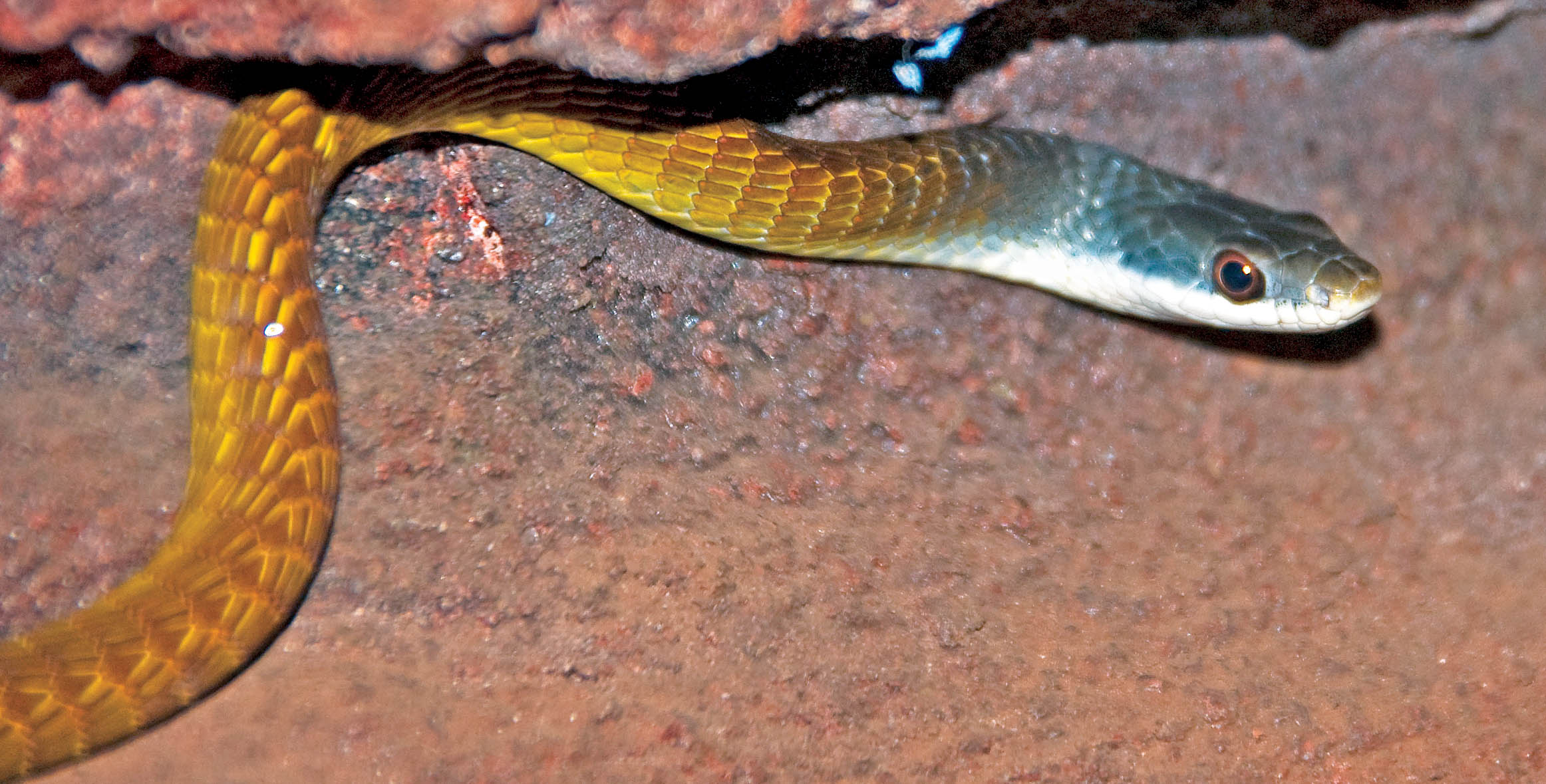 For a lecture on the reptiles of the tropical Australian woodlands