Wolf spiders are very common. A quick look with a head torch at night over the tropical woodlands ground will reveal many twinkling star-like lights; these are the eyes of Wolf Spiders! 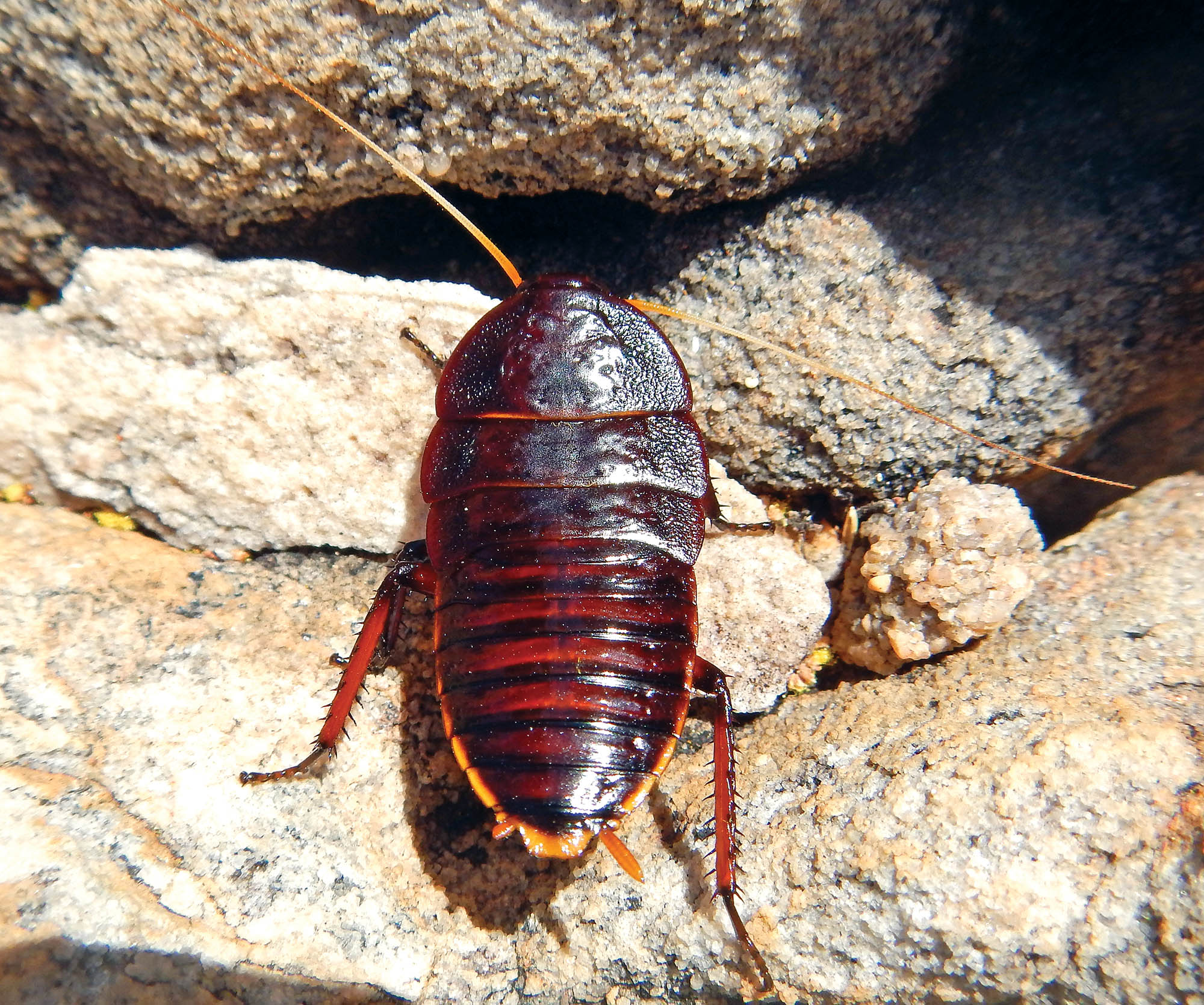 While termites are often called ‘white ants’ and do superficially resemble ants, they are in fact not at all closely related. Their order is considered much more primitive than ants, but they have evolved a complex colonial caste system similar in some respects to ants, with specialized ‘worker’ and ‘soldier’ individuals. Termites feed primarily on cellulose in dead vegetation and are thus acknowledged to be important recyclers in the tropical open woodland. They seem even more dominant in the tropical woodlands of northern Australia compared to the equivalent habitats elsewhere in the world.

Termites are quite inoffensive creatures to larger animals like humans. They are relatively delicate and are rarely seen on the open ground, with most living within the soil or vegetation. Relatively few species construct mounds, but the species that do are usually the most noticed. 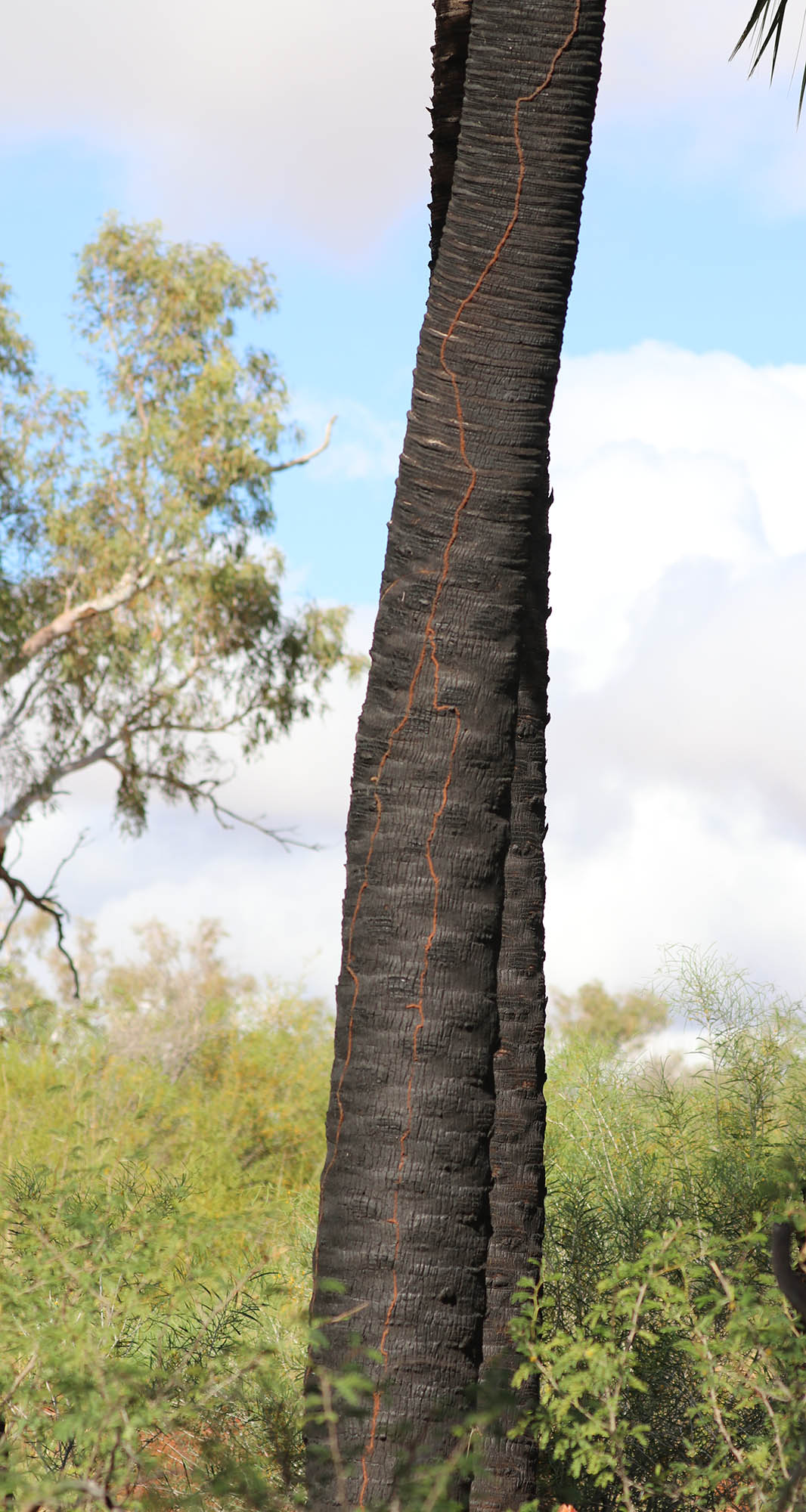 Many species travel across the land through specially constructed tunnels. They are usually made up of grains of soil, and stuck together with termite saliva. They can make nice patterns across rock walls and burnt tree trunks.

The insects of this order are well known for their quick springing and jumping abilities, a skill possible due to the incredibly long legs that are bent back and to the side of the body. These legs are also involved in sound production; they are rubbed to create the sometimes very loud noises that males make to attract females. This is also a group of ecological and economic importance, as they constitute some of the most dominant grazers in many ecosystems including savanna, and are among the more serious crop pests around the world, such as some locusts. 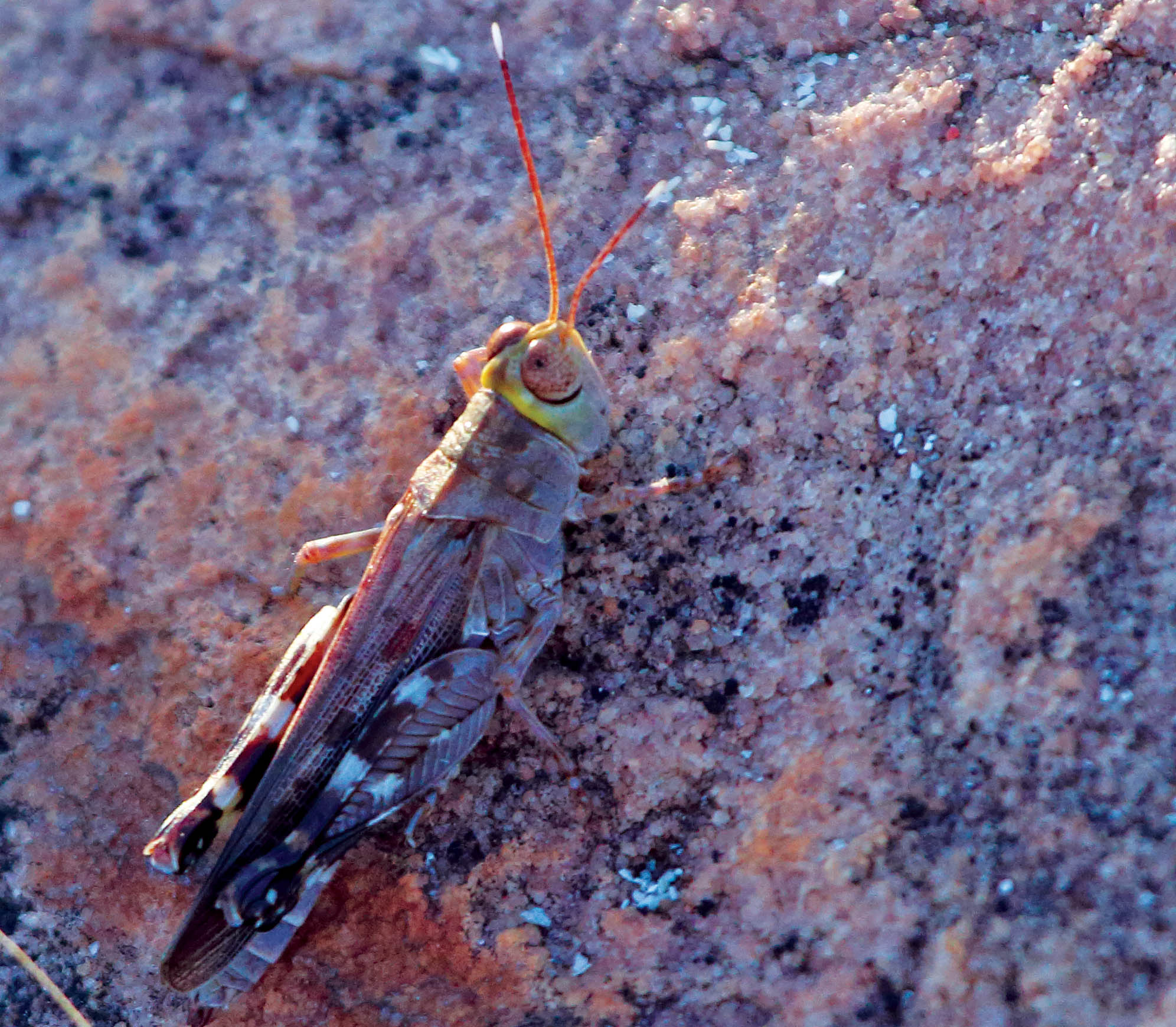 Like many common names cricket and grasshopper mean different things in different places. Generally, the crickets tend to be nocturnal, have long antennae and females have an extension to the back of their body which is stuck into soil to lay eggs (ovipositor). In contrast, grasshoppers (pictured above) tend to be diurnal, have short antennae and females lack the ovipositor. Generally, the nocturnal crickets are duller coloured, while the diurnal grasshoppers can be brighter colours (although it can often be the other way around!).

This is the biggest family of grasshoppers, including over 10,000 species (of the 11,000 or so species of the Grasshopper suborder). They are the most common species you see flicking around on rocks in the tropical woodlands. They are usually small and stubby, with short antennae.

The family of ‘Whirligig’ Beetles has hundreds of species. They are often noticed found whirling about in circles on the surface of the quieter waters all around the world. They are in fact looking for dead insects or ones that are trapped in the surface tension of the water. Their eyes are like bifocals, divided into two segments for looking above the water and below the surface simultaneously. 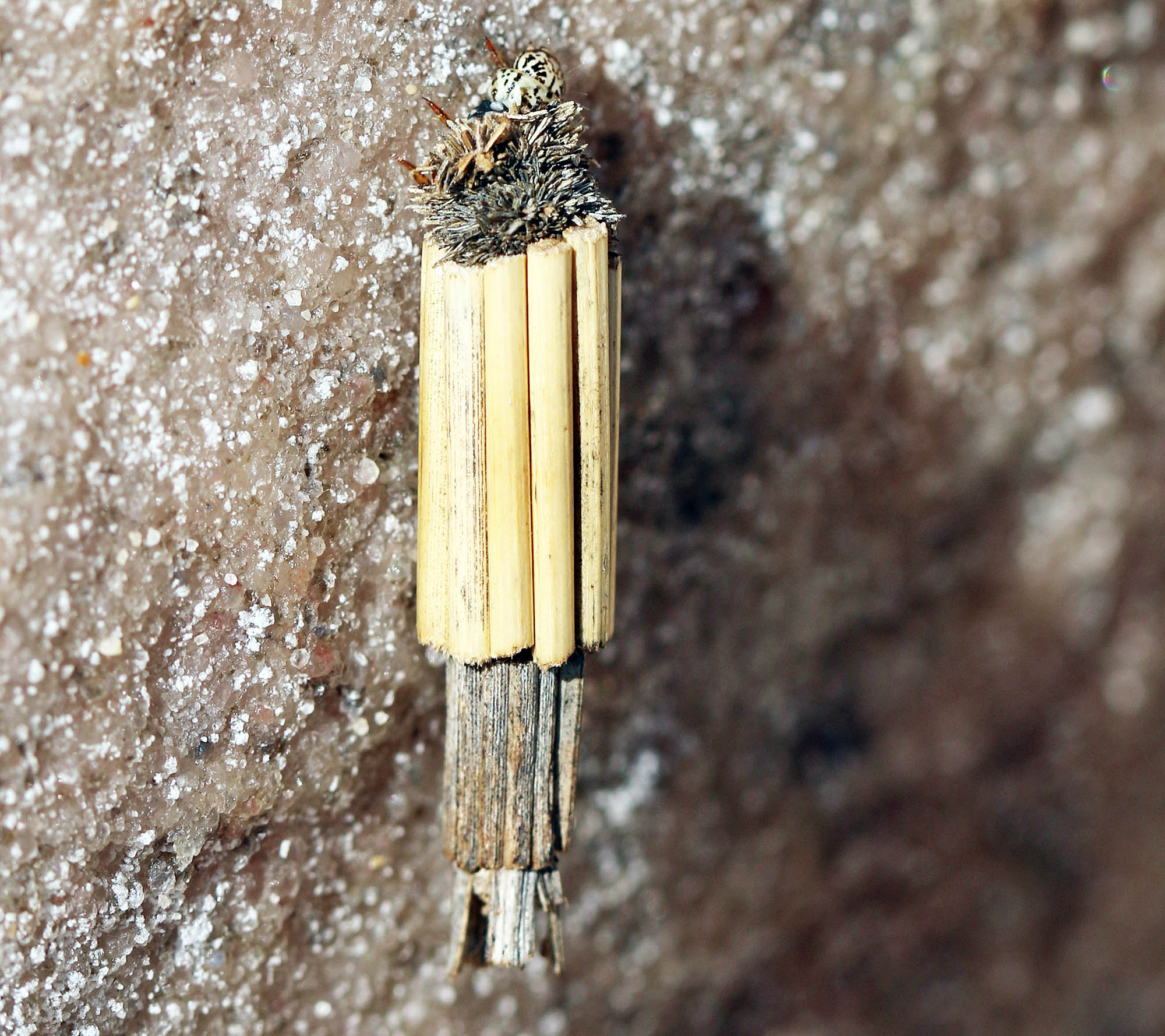 A family of about 5000 species found all around the world, and includes most of the familiar social wasps. 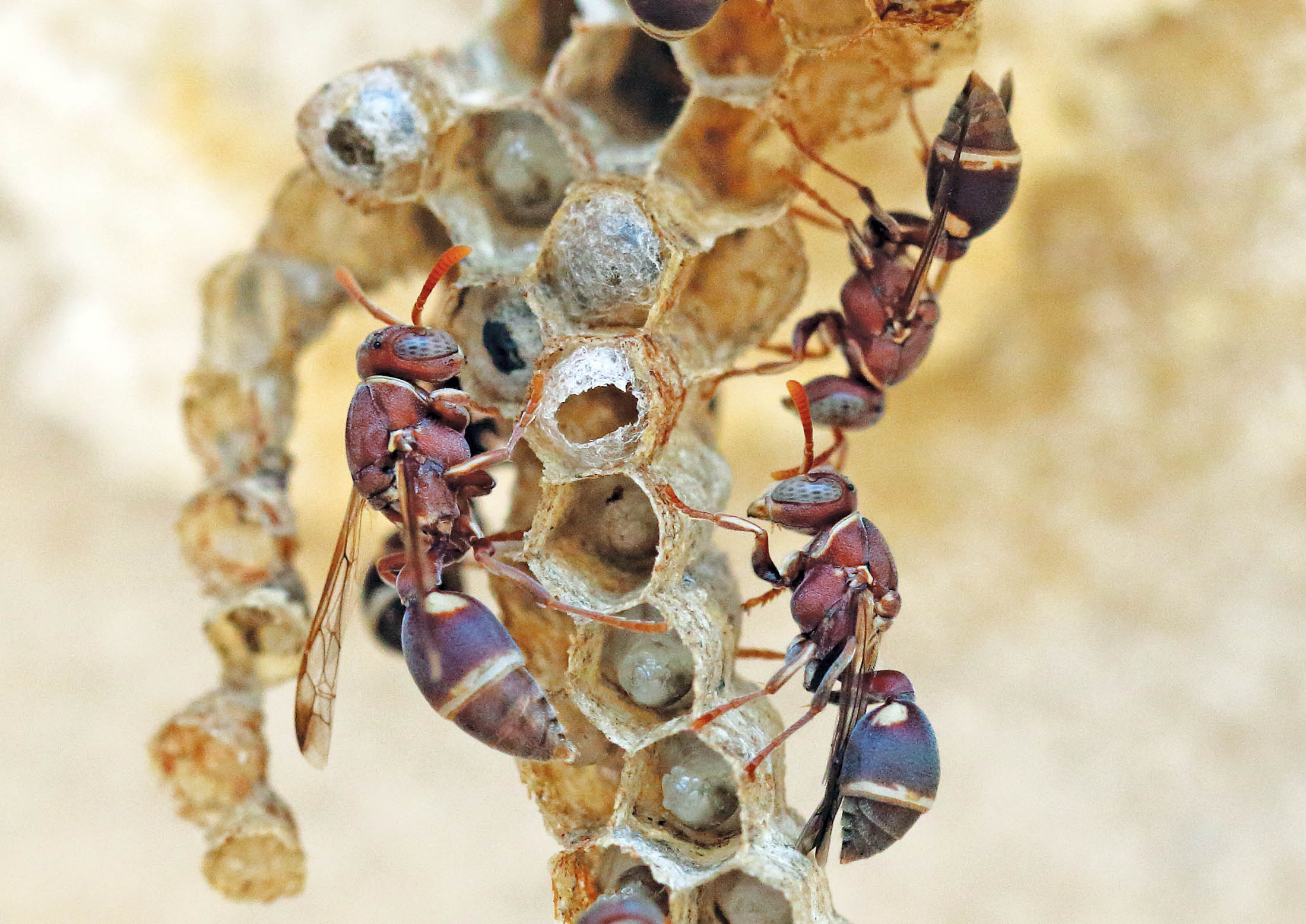 A family of over 5000 species found all over the world.

Tiny fly like bees. As the name suggests, they do not sting. Although they are mostly black, a closer look reveals many pretty variations.

There are about 30 species in this genus and they are found in various habitats throughout the tropics of Australasia and Asia. 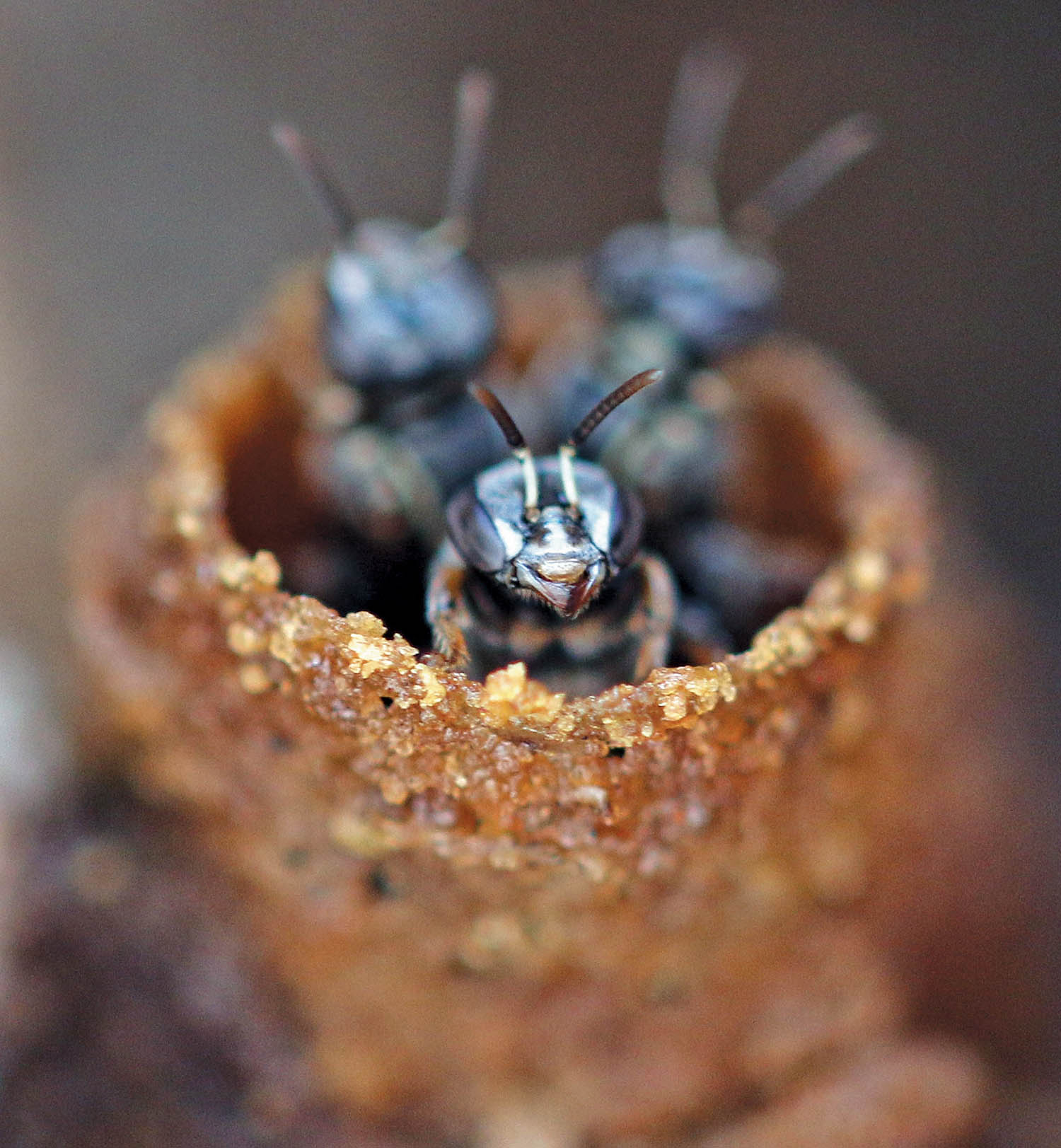 Tertragonula at entrance to nest. 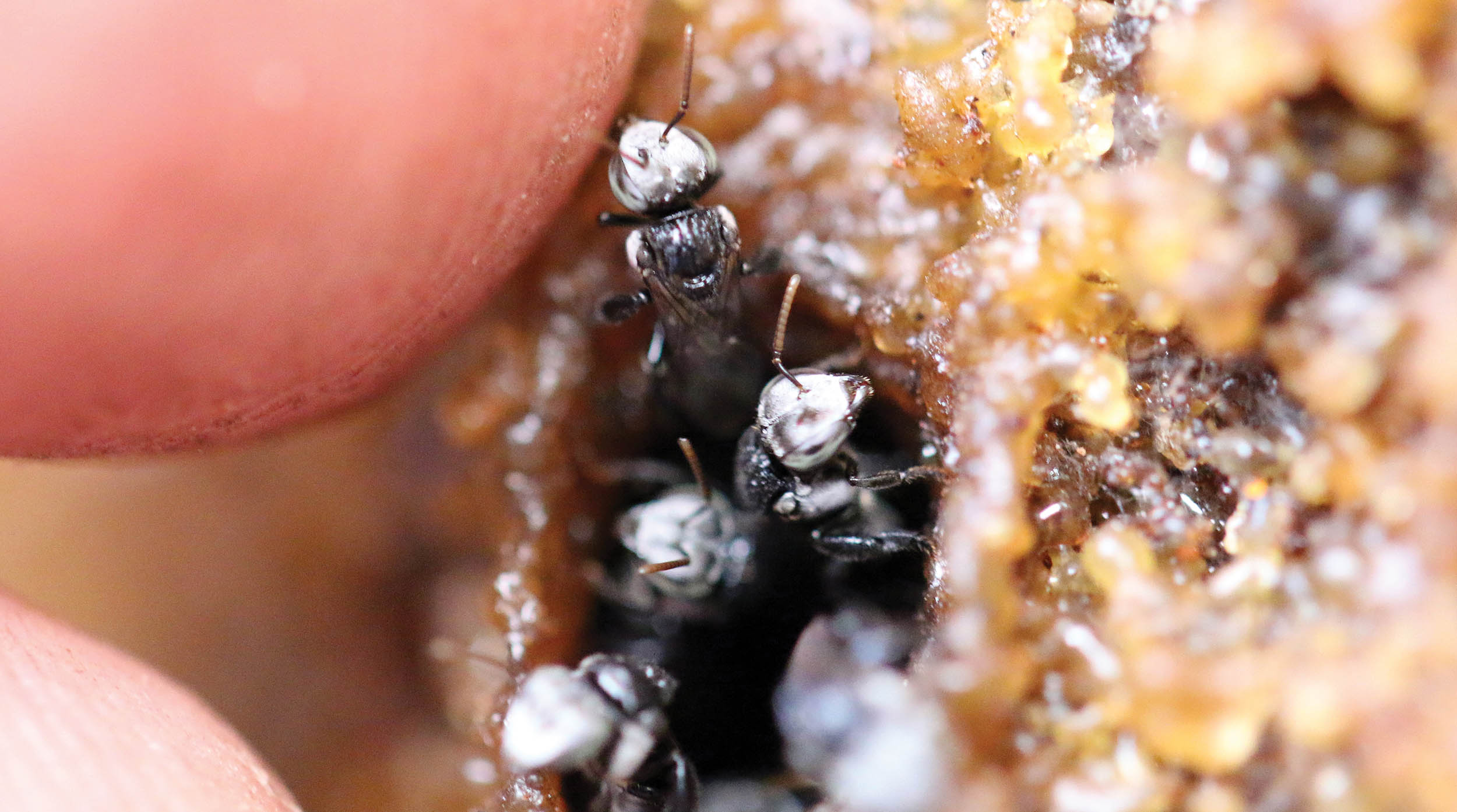 Tertragonula with my finger, to give an idea of how small (and harmless) these bees are!

There are thought to be over 22,000 species of ants, and of course they are EVERYWHERE!

Opisthopsis spp., 'Jery Ants', 'Strobe Ants'. There are 13 species in this genus and they are endemic to Australasia. The genus name refers to the eyes at the back of their head. They seem to walk in peculiar and distinctive jerky motions.

Weaver Ants are found in the tropics of Africa, Asia and Australia. There are now 2 recognized species with several different races, including the 1 species found in Australia.

The generic name of Oecophylla means ‘house-leaf’ and refers to the fact that these ants make a nest out of leaves (while still attached to the tree); this is something very few other ants do. The building of the nest is an interesting process. The establishment of a new colony is begun by the queen ant. She lands on a suitable leaf and discards her wings. She then produces several larvae and uses their silk to build a structure to house the developing workers. The first adult workers then proceed to build a nest. Fresher leaves are usually selected because they are flexible and can be bent. 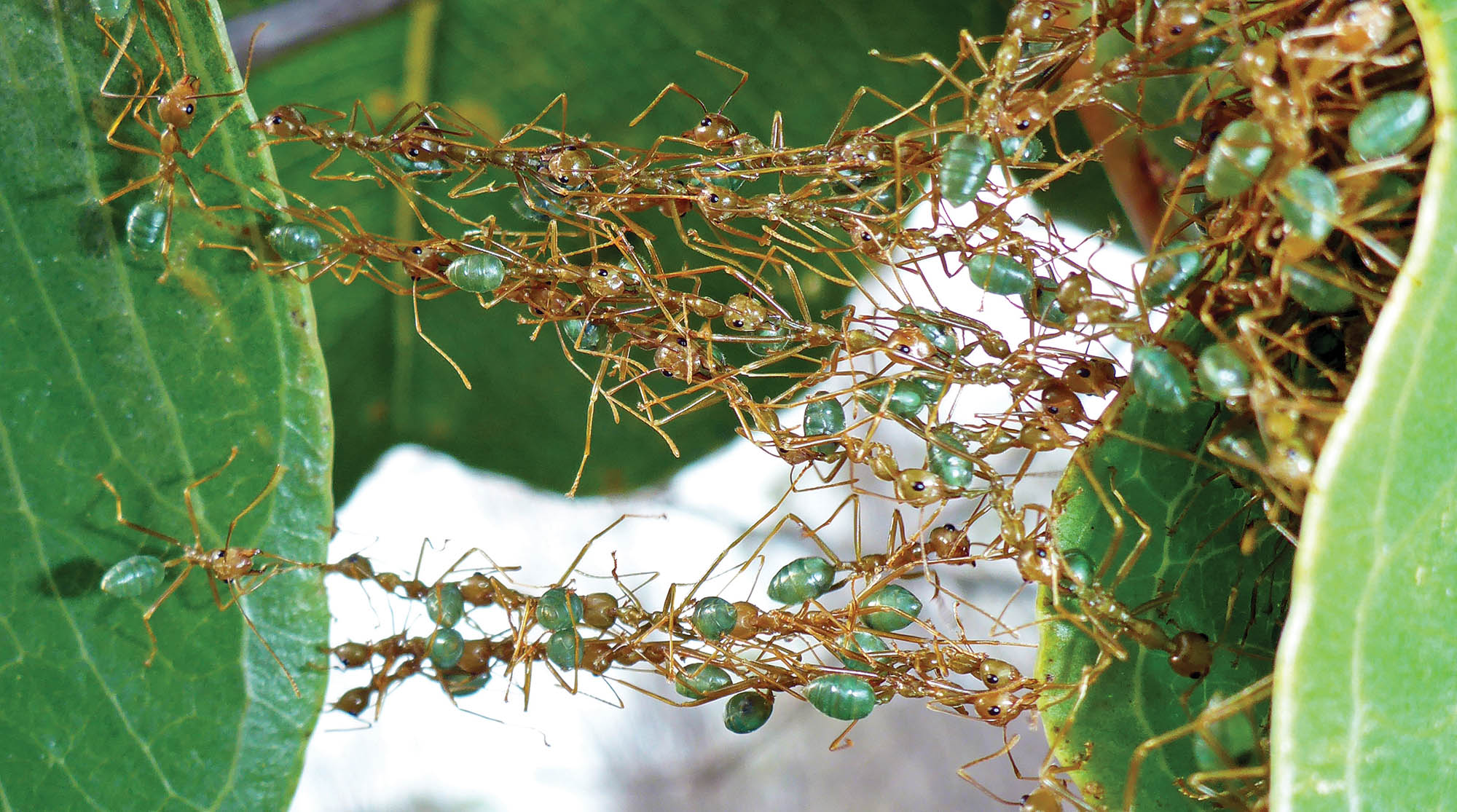 The ants may form bridges or chains with their bodies to bring the leaves together. Other ants then grab their larvae and squeeze silk out of their bodies like toothpaste from a tube. 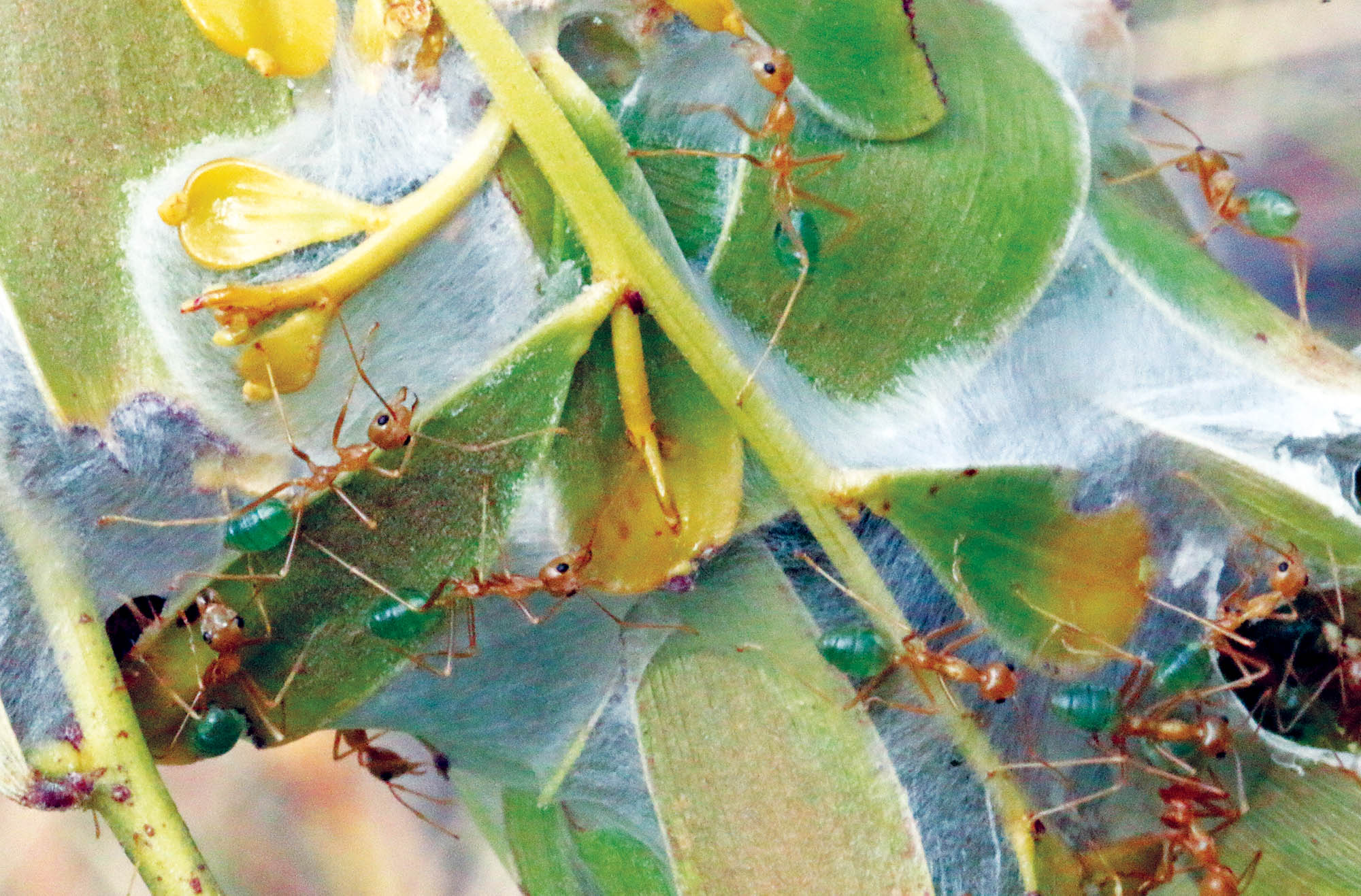 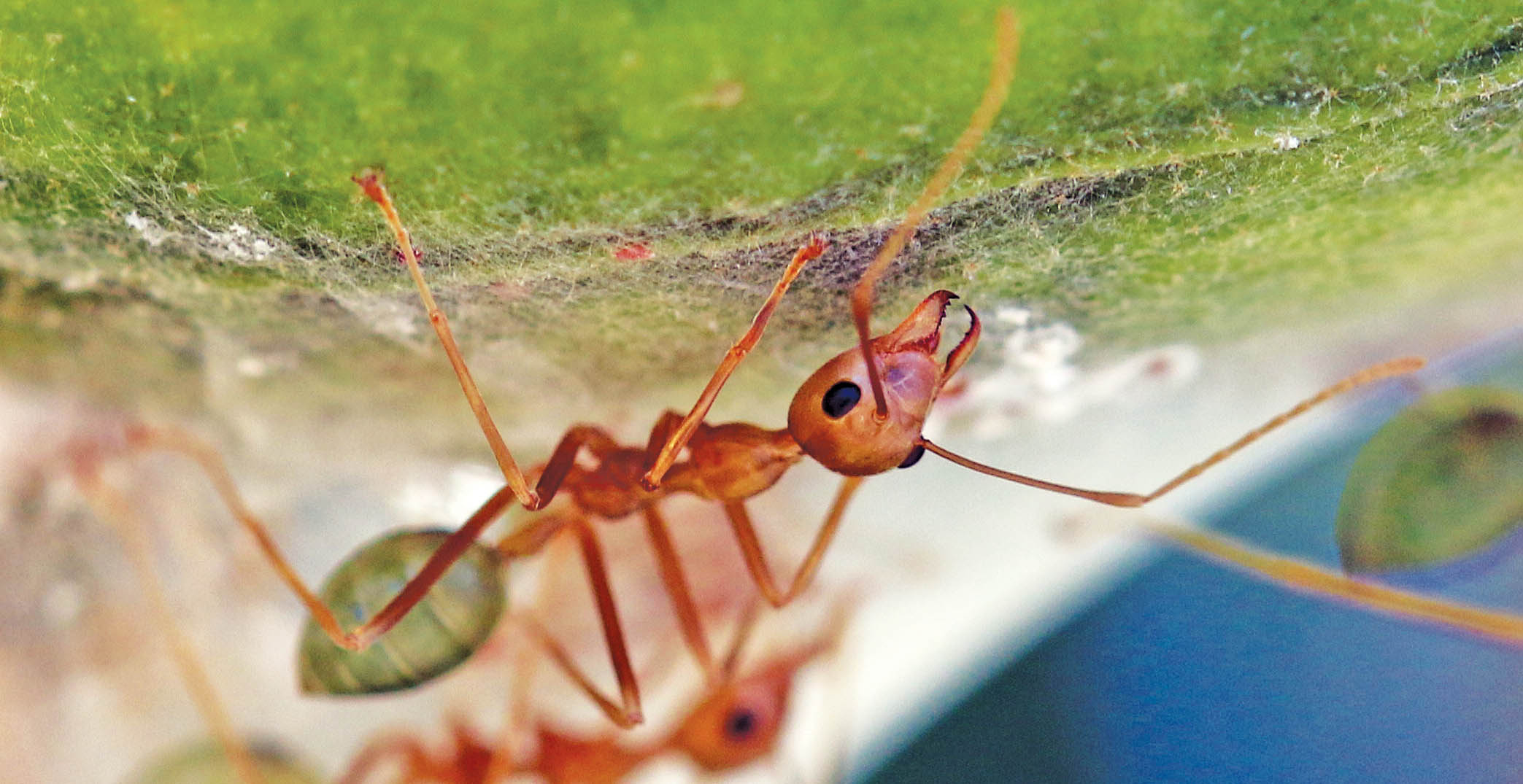 Oecophylla smaragdina. ‘Green Tree Ant’. These are large ants, usually with a brownish body and an abdomen that varies from brown to reddish to bright green; the latter is their colour in northern Australia. They have large and effective mandibles. Weaver ants feed their larvae on a large variety of foods, ranging from fruit, to dead animals, to catching their own insect prey. They are quite ambitious predators, for example catching onto relatively large, struggling butterflies with their strong mandibles. When biting humans this results in a short, but sharp, sting, and this is how many people first interact with this species, probably the most commonly encountered ant in the Australian tropics. However, you can also bite back; as these animals are edible, and in fact quite tasty.