Throughout the warmer parts of the world there are always birds that have evolved to feed specifically on nectar. In Australasia, it is the honeyeaters. They are the biggest family of birds in Australia, including the northern tropical woodlands.

Despite the name, honeyeaters do not exclusively feed on nectar, for while it is high in energy giving carbohydrates (i.e.; sugar); it is low in nutrients. Thus, most honeyeaters probably couldn’t survive without including a few protein rich insects in their diet. Some ingest them as a consequence of feeding from flowers, but many ‘honeyeaters’ are actually more insectivorous than nectivorous.

Many of the physical features of honeyeaters are reflections of their nectar feeding lifestyle. Most have a bill that is curved to some extent, with the bill shape largely reflects the types of flowers they are visiting. Another adaptation is the long tongue; it is split into 4 tiny hair-like extensions at the end to give it the appearance of a brush, and this assists in soaking up the liquid nectar by capillary action. Some honeyeaters can move this tongue at more than 10 licks per second.

Generalizations of lifestyle and behaviour are hard to make with such a large and diverse family. Like many hummingbirds, honeyeaters can be territorial, often chasing others away from their nectar or insect source. Breeding seasons are extremely varied, reflecting the different times of nectar production in different plants. A mated pair will usually construct a cup shaped nest suspended in the horizontal fork of a tree. This may then be lined with softer material such as fur, feathers and plants. As with some other types of Australian birds, it is not unusual for assistant parenting from non-breeding pairs to occur.

This genus contains a dozen species, mostly found around and the surrounding islands of the south-west pacific and Indonesia.

Lichmera indistincta, 'Brown Honeyeater'. Adaptable and found in a variety of habitats across much of Australia, except for the drier inland and extreme south-east.

There are only two species in this genus, and they are both endemic to northern Australia. 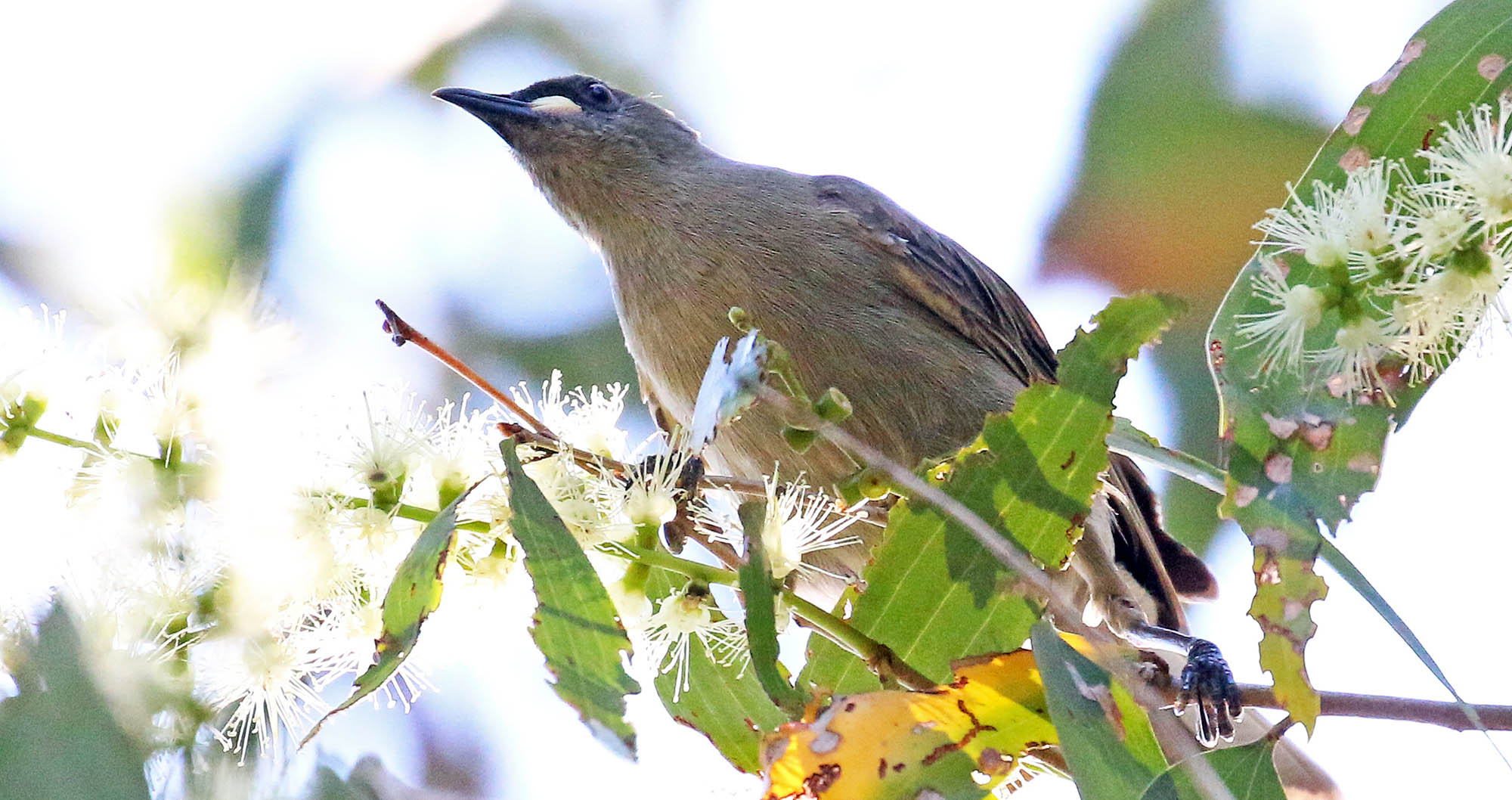 Stomiopera unicolor, 'White-gaped Honeyeater'. Found in various habitats across northern Australia, including monsoon forest, the edge of woodlands, and urban areas around Darwin.

This is a monotypic genus.

Acanthagenys rufogularis, 'Spiny-cheeked Honeyeater'. Most common in the open habitats across arid central and southern Australia, but can also be found in the southern edge of the tropical woodlands of northern Australia. 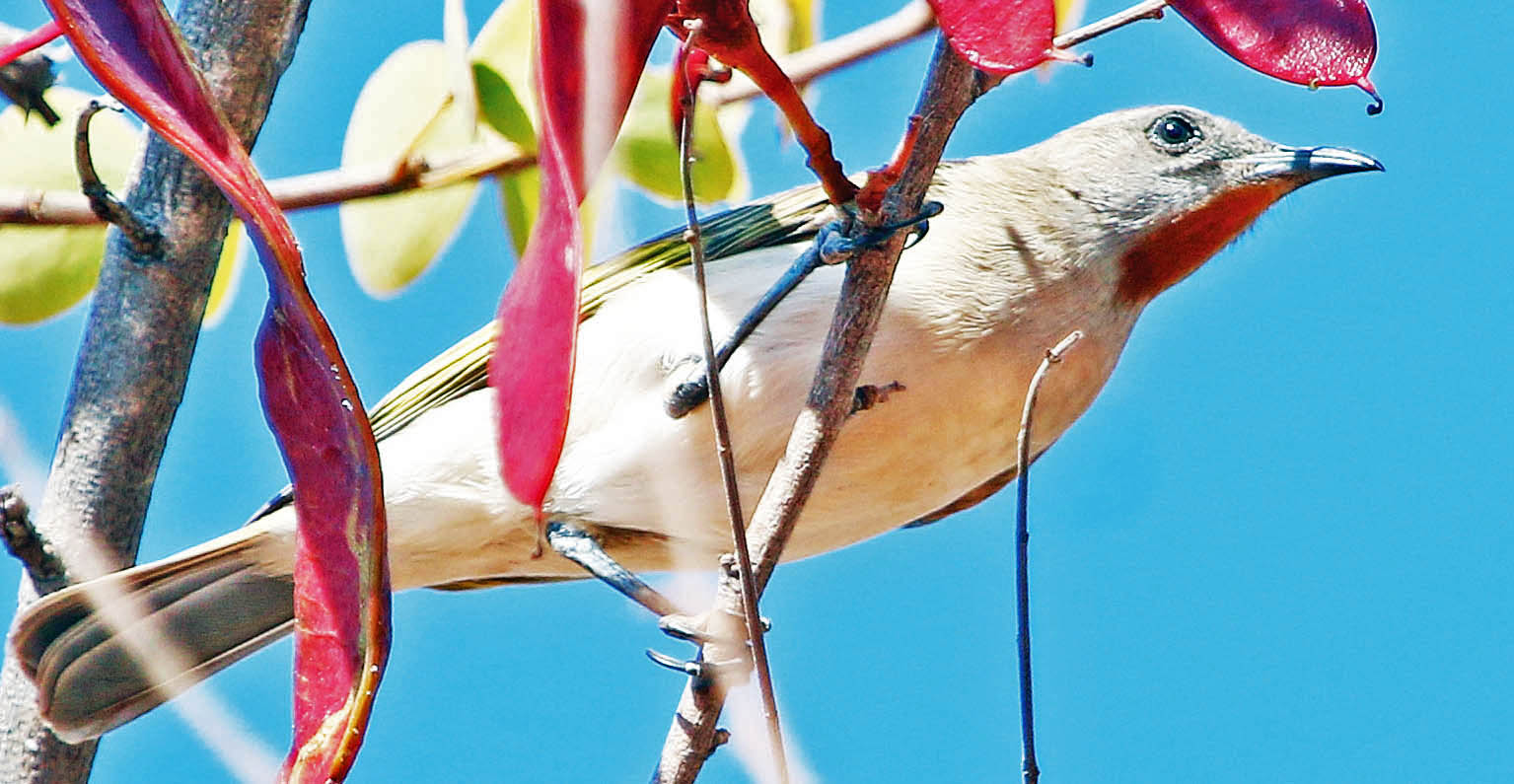 This genus contains 6 species. They mostly have a crescent shape on their cheek or neck. 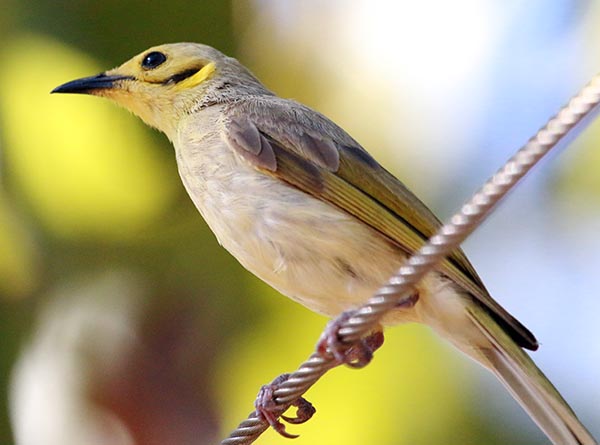 Ptilotula keartlandi, 'Grey-headed Honeyeater'. Found in open habitats across central Australia and into the southern parts of the northern tropical woodlands.

There are two species in this genus. 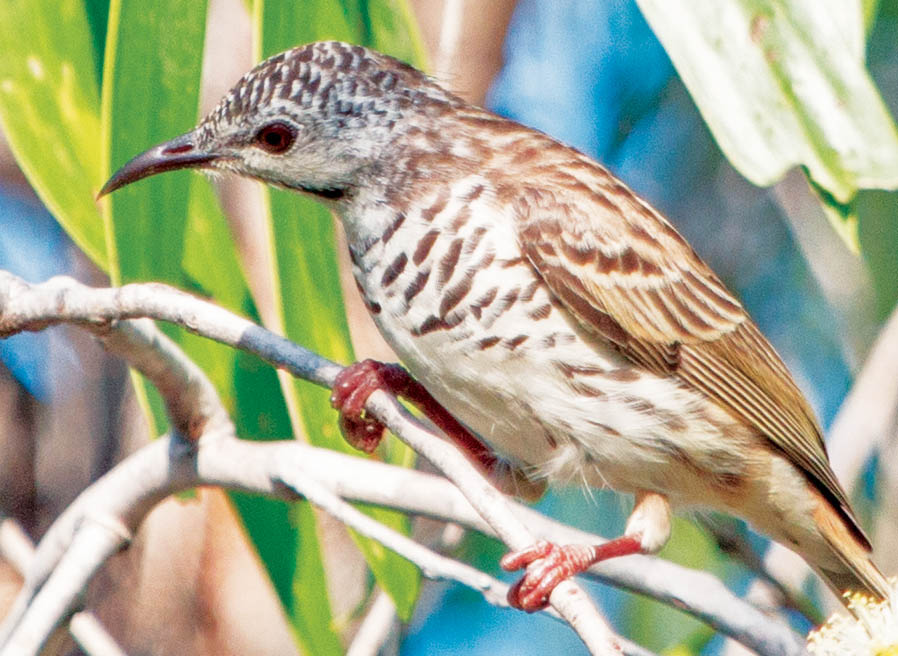 Ramsayornis fasciatus, 'Bar-breasted Honeyeater'. The nests are found hanging along rivers in tropical woodlands, and just look like flood debris. Found in woodlands, especially along rivers and in paperbark wetlands, across northern Australia. 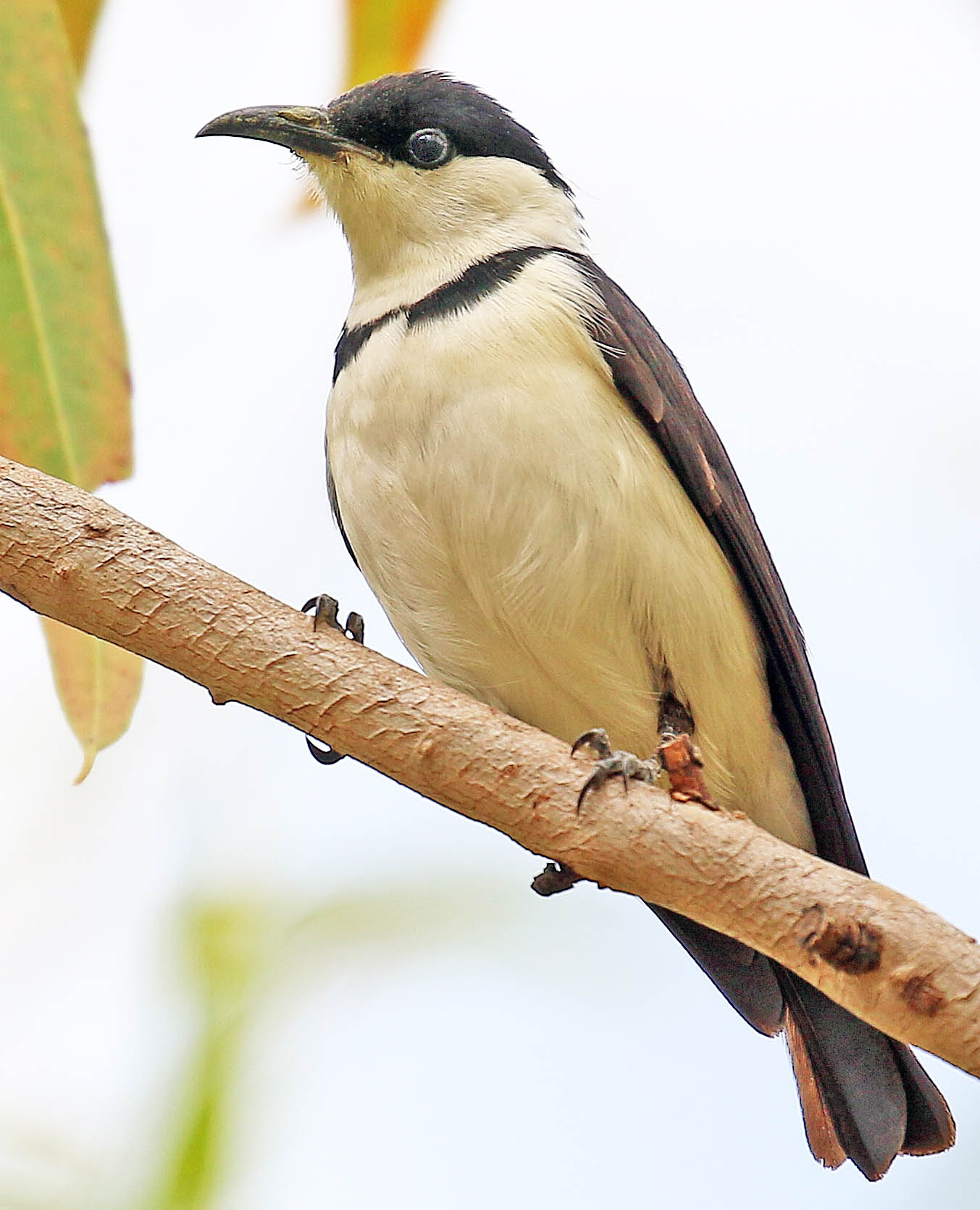 There is only one species in this genus

(Pied Honeyeater out of it's usual range, in the Kimberley)

Certhionyx variegatus, 'Pied Honeyeater'. Found in open dry habitats across inland Australia, where it appears very nomadic and irruptive, probably following rain and flowering events. Every now and then it turns up on the southern edge of tropical woodlands. 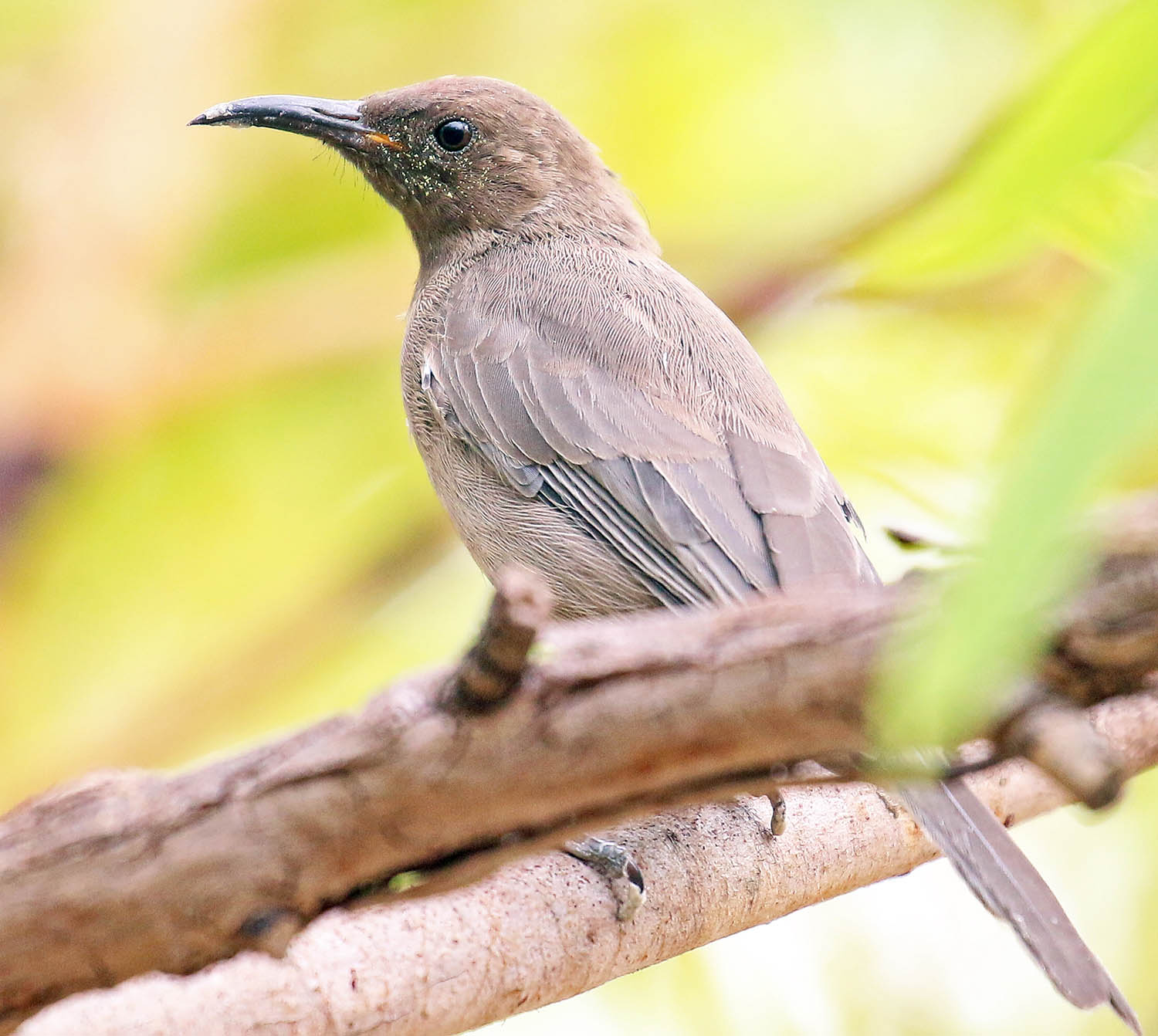 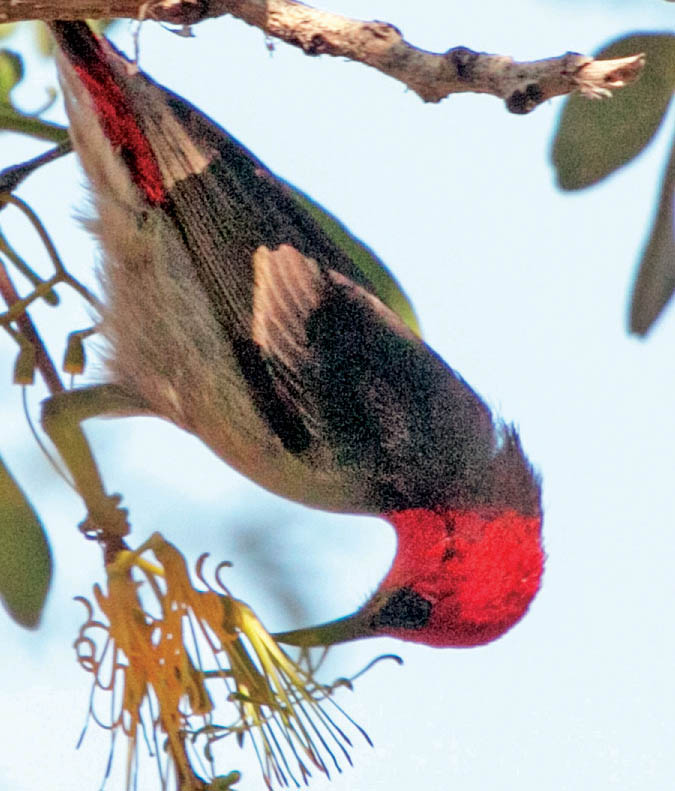 Melithreptus albogularis, 'White-throated Honeyeater'. Found across northern Australia and down along the east coast. Last century, this was known as the 'Gay Honeyeater'. 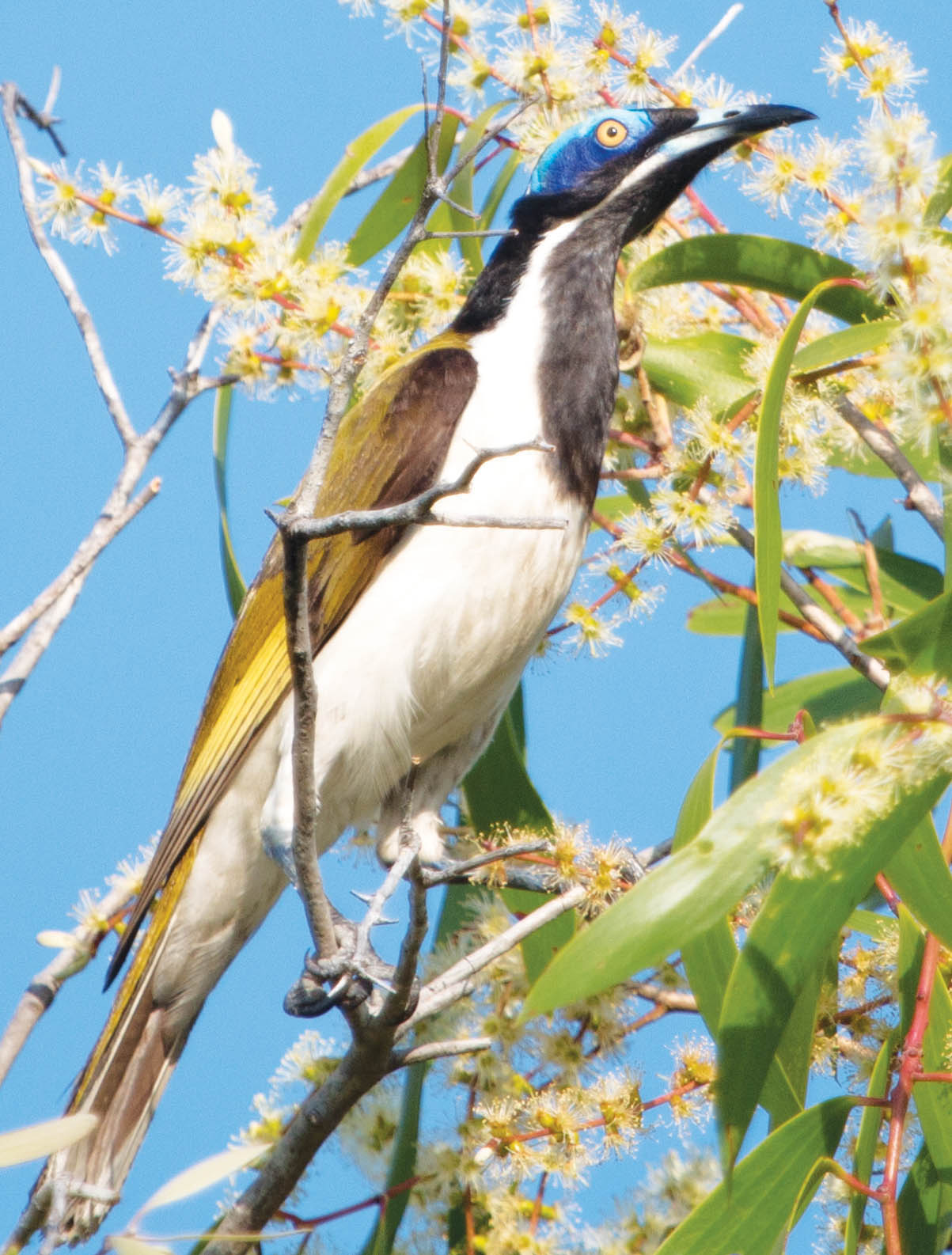 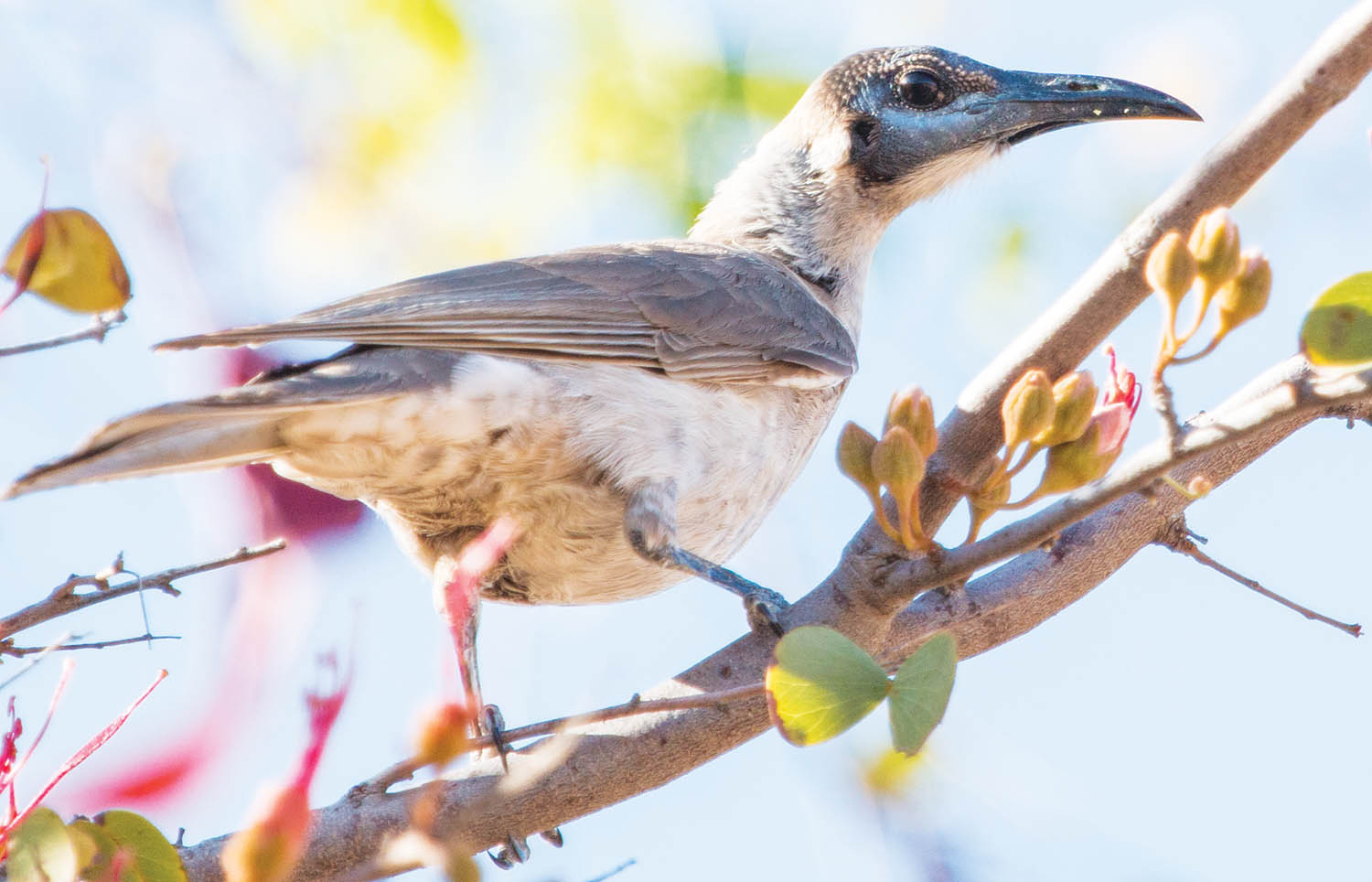 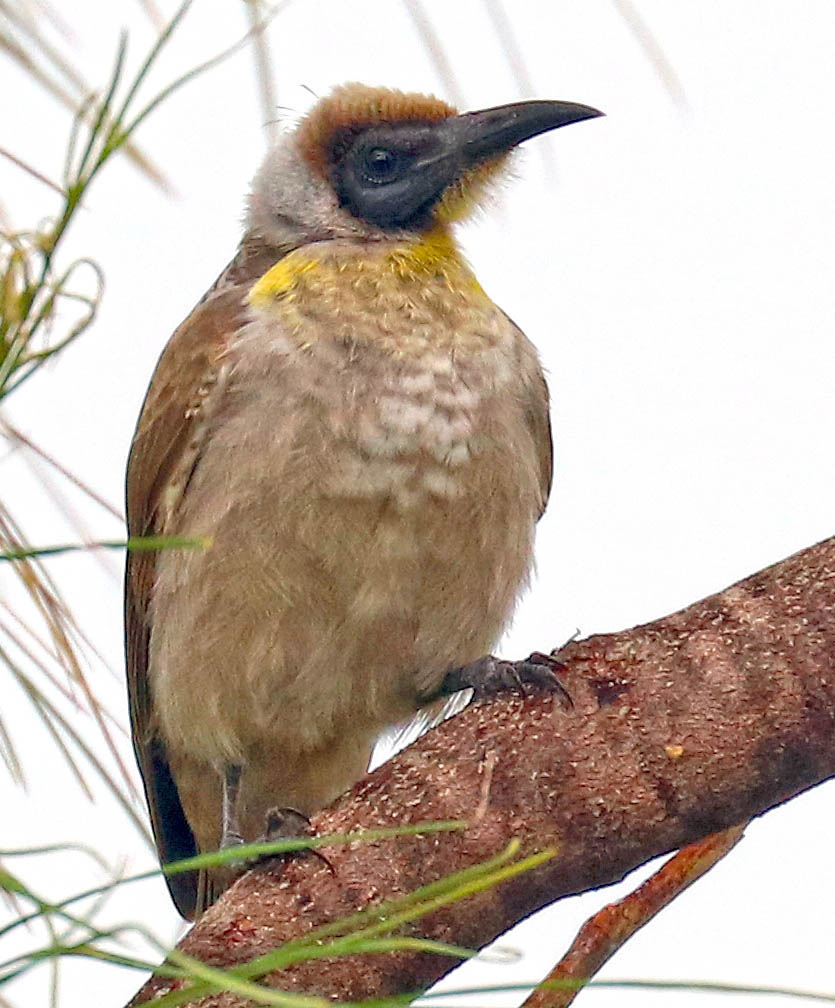 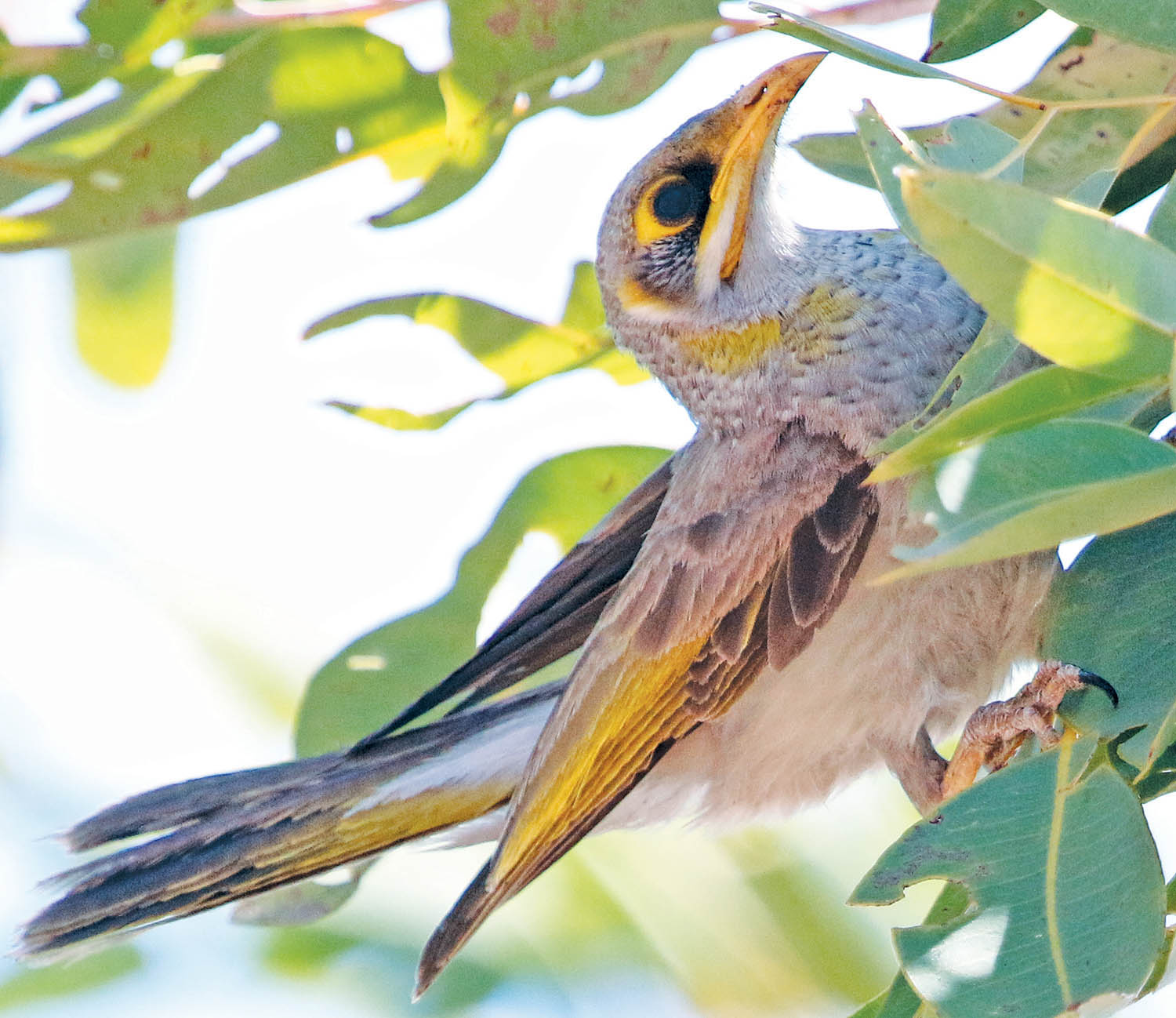 Manorina flavigula, 'Yellow-throated Miner'. Found in open habitats across most of the Australian continent except the south-east.

(not pictured) Manorina melanocephala, 'Noisy Miner'. Found in Eucalyptus dominated habitats in eastern Australia. Despite its native status and the amount of introduced animals, it is now considered a pest in urban areas.

Back to the page on Australian tropical savanna woodlands