The diverse flora of the Australasian tropical bush...

One of the highest groups of diversity in the Australian tropical woodlands are the plants. To deal with this variety, I have included only the more common genera and species. I have followed the order of the APG III (Angiosperm Phylogeny Group), which reflects their evolutionary order. 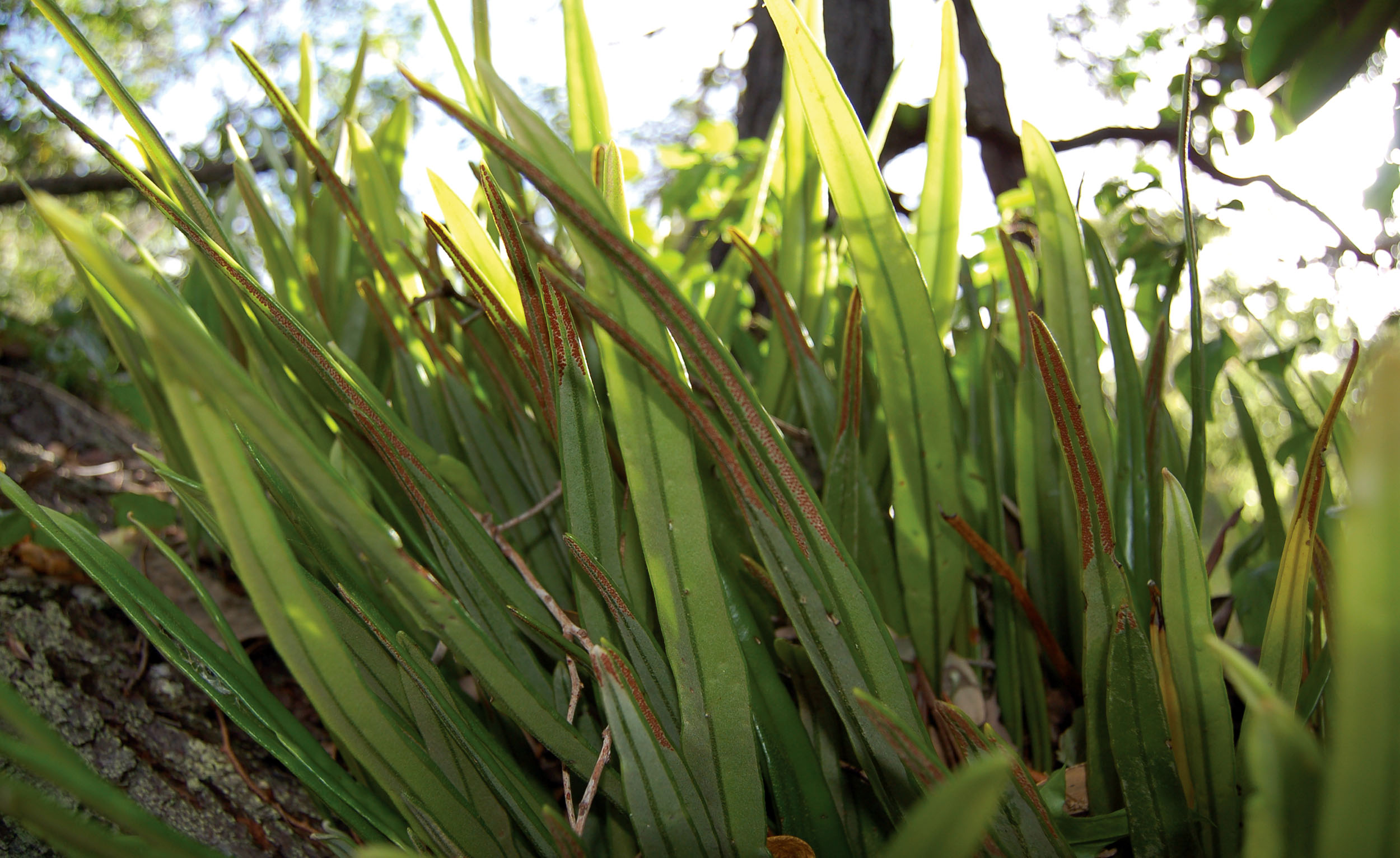 One of the older groups of plants are the ferns. They are not as common or speciose in the tropical woodlands as they are in the rainforest, as they require moisture to reproduce.

This is one of the biggest of all families of plants, with up to 35,000 species. Most tropical orchids are epiphytic (growing on other plants), with some being lithophytic (growing on rocks). The flowers of orchids are famous because they have varied colours, elaborate patterns and bizarre shapes. Part of their unusual shape is due to the uneven petal arrangement, which is known as zygomorphic, and there is frequently a twisting and elongation of the sepals and petals. The unusual flowers of many species have evolved specifically with particular species of insects, most commonly wasps. If pollinated, the flowers are followed by small, hard fruits that release lots of tiny seeds.

There are about 50 species in this genus, and they are found throughout tropical Asia and the islands of the south-west Pacific. They were recently split from Dendrobium. The plants are usually made up of large stalks with thick leaves. They are generally long lived and hardy for an orchid, and thus include some species that can handle and grow on the exposed salty edge of coastal habitats. The flowers are frequently large and colourful, and often have wavy or twisted petals. The flowers also live longer than most orchid flowers, and are mostly pollinated by large wasps. 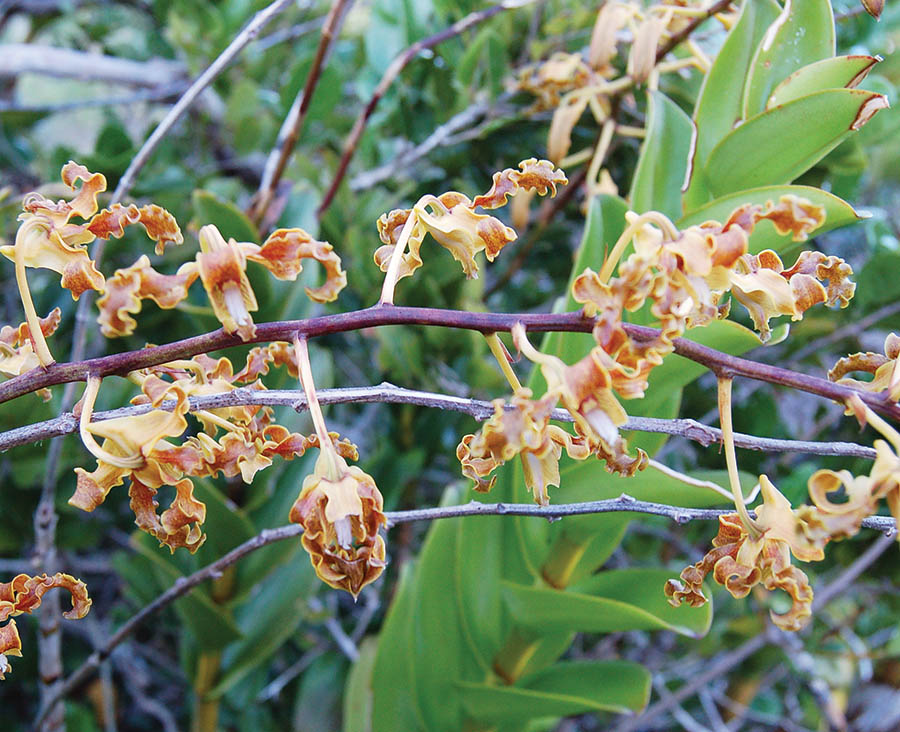 Durabaculum undulatum (previously Dendrobium discolor) 'Golden Antelope Orchid'. Epiphytic, including in mangrove trees, but more commonly growing as a lithophyte (including on seashore rocks). Large sprays of colourful flowers growing on long woody stalks. Stems may stretch out for a metre. Flowers vary in colour depending on variety, but usually gold. Grows in rainforest, mangroves, open forest, mainly in coastal situations, from central Queensland Australia up into New Guinea. Because of its hardiness, is popular in tropical gardens.

One of the biggest, commonly seen, best known, and most important families of plants on the planet. In the tropical savanna woodlands they are one of the dominant types of plant. 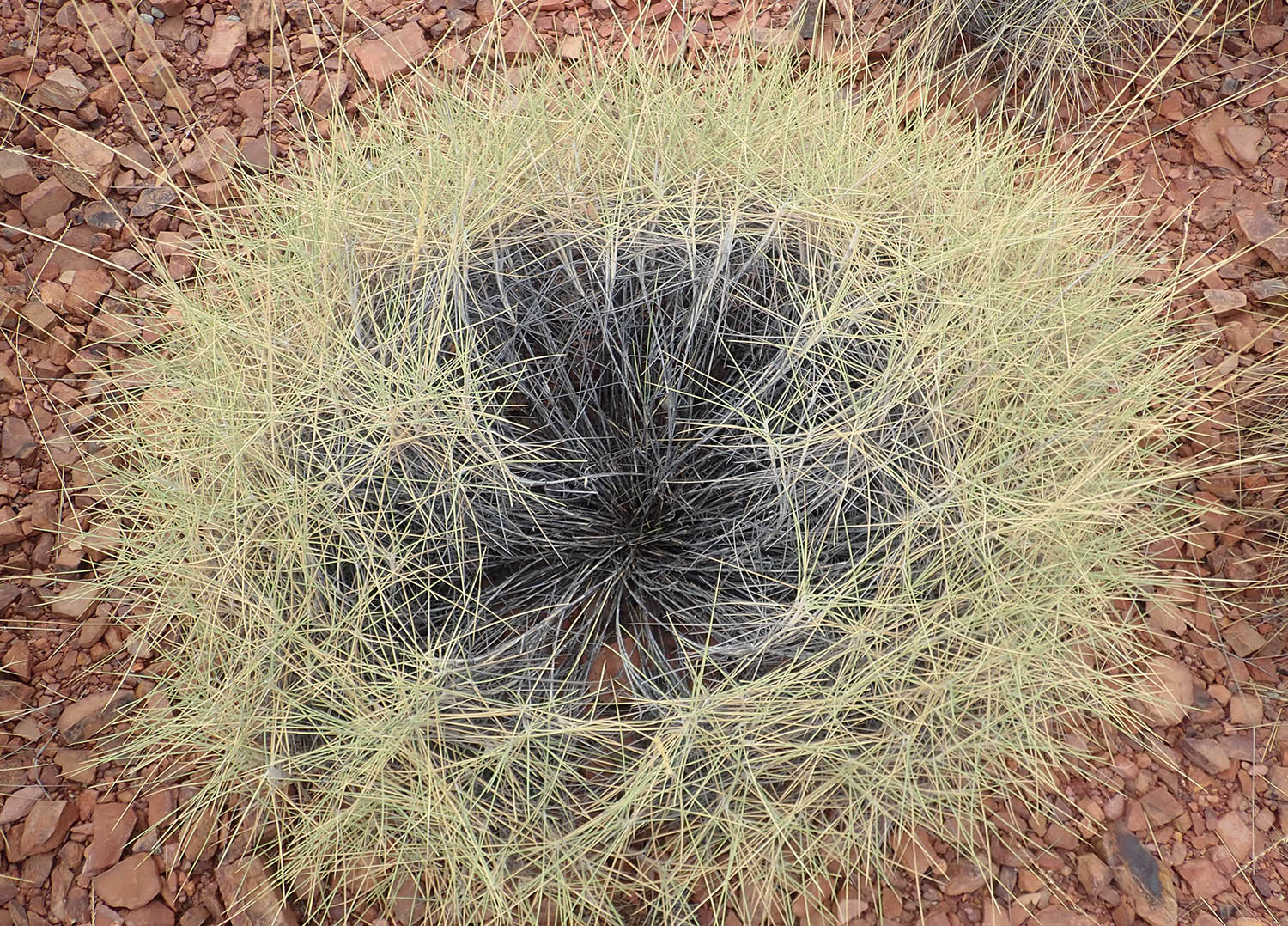 Triodia spp. 'Spinifex Grass' or 'Porcupine Grass'. These grasses often grow out, with the older inside of the clump dying, leaving a 'donut ring'. Hmmm..donuts.

There is only 1 genus in this family. 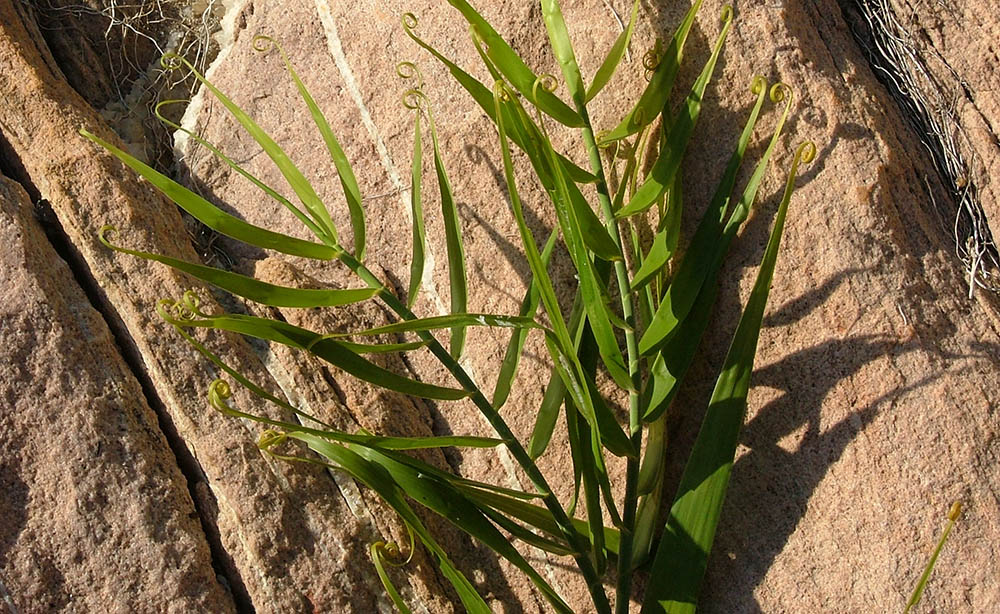 There are only 4 species in this genus, and they are restricted to the Old World tropics of Africa, Asia and Australia. They are generally fast and vigorous climbers with round, cane-like stems and long leaves. These long leaves are unusual as the tips have been modified into tendrils to enable the plant to curl its way through the canopy. They are found on trees in various tropical habitats.

This is a massive family, with over 10,000 species in some 400 genera. They are found all over the world, but best developed in the tropics. There are over 1000 species in Australia, with many species across the tropical woodlands. The easiest way to identify species in this group is by their ‘pea’-like flower, where one petal is much larger than the others.

This genus contains about a dozen species throughout the tropics of the world, including 1 species in Australia. 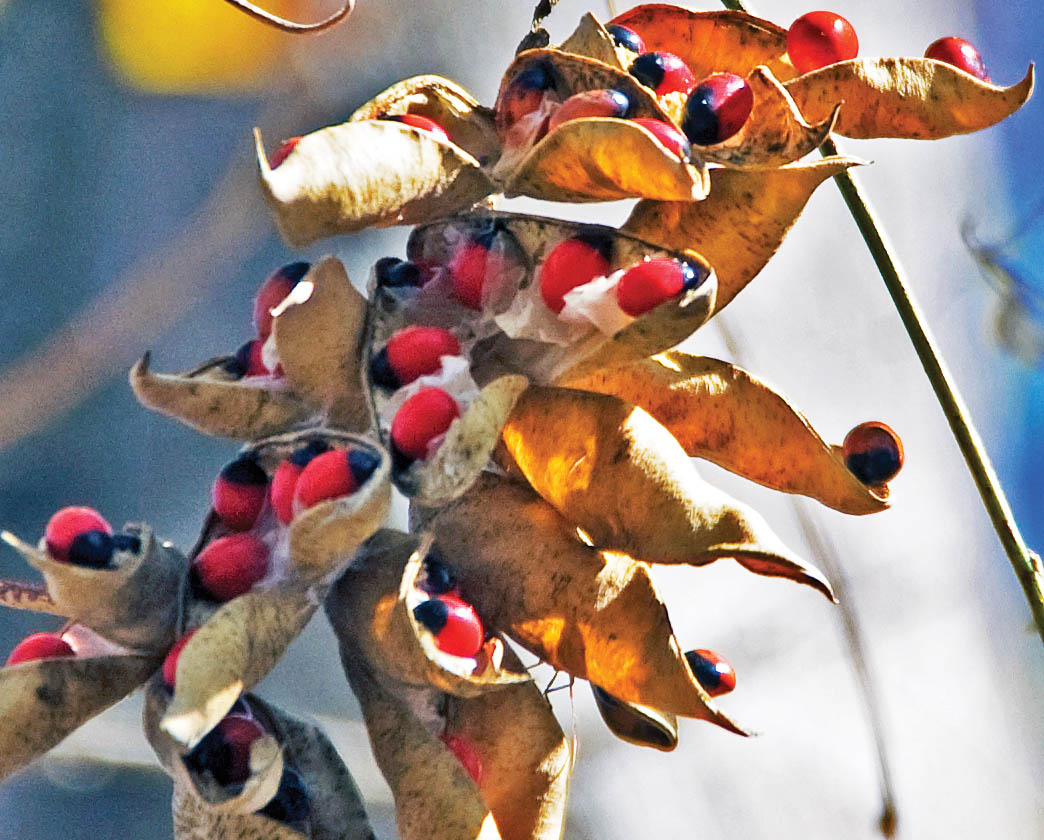 Abrus precatorius ‘Crabs Eye Vine’. Climber. Compound leaves. Small brown pods contains many attractive tiny bright red and black seeds. Found in beach forest and monsoon forest across tropical Australia, Asia, to Africa. Seeds contain one of most powerful poisons known, called albrin; if the seed coat is broken down during digestion, one seed is enough to kill a man.

The biggest genus in Australia. In the tropical woodlands many species of Acacia are very common understory plants. In the tropics, what tends to look like the leaves are actually flattened stems called phyllodes, which effectively act like leaves, being photosynthetic. The flowers are mostly yellow, either in balls or spikes. The fruits are brown pods with small black seeds, often with a small yellow or orange fleshy connection. 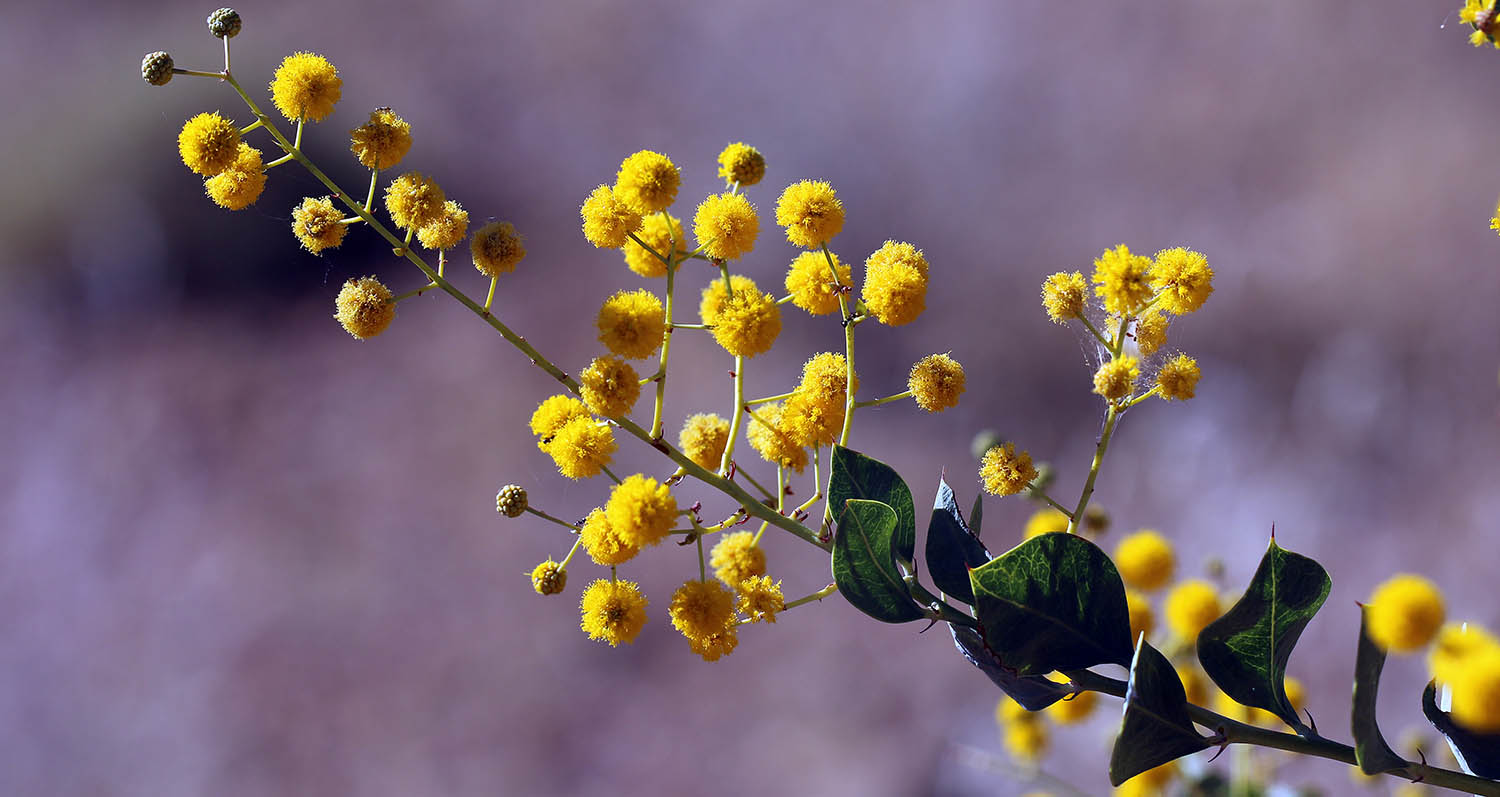 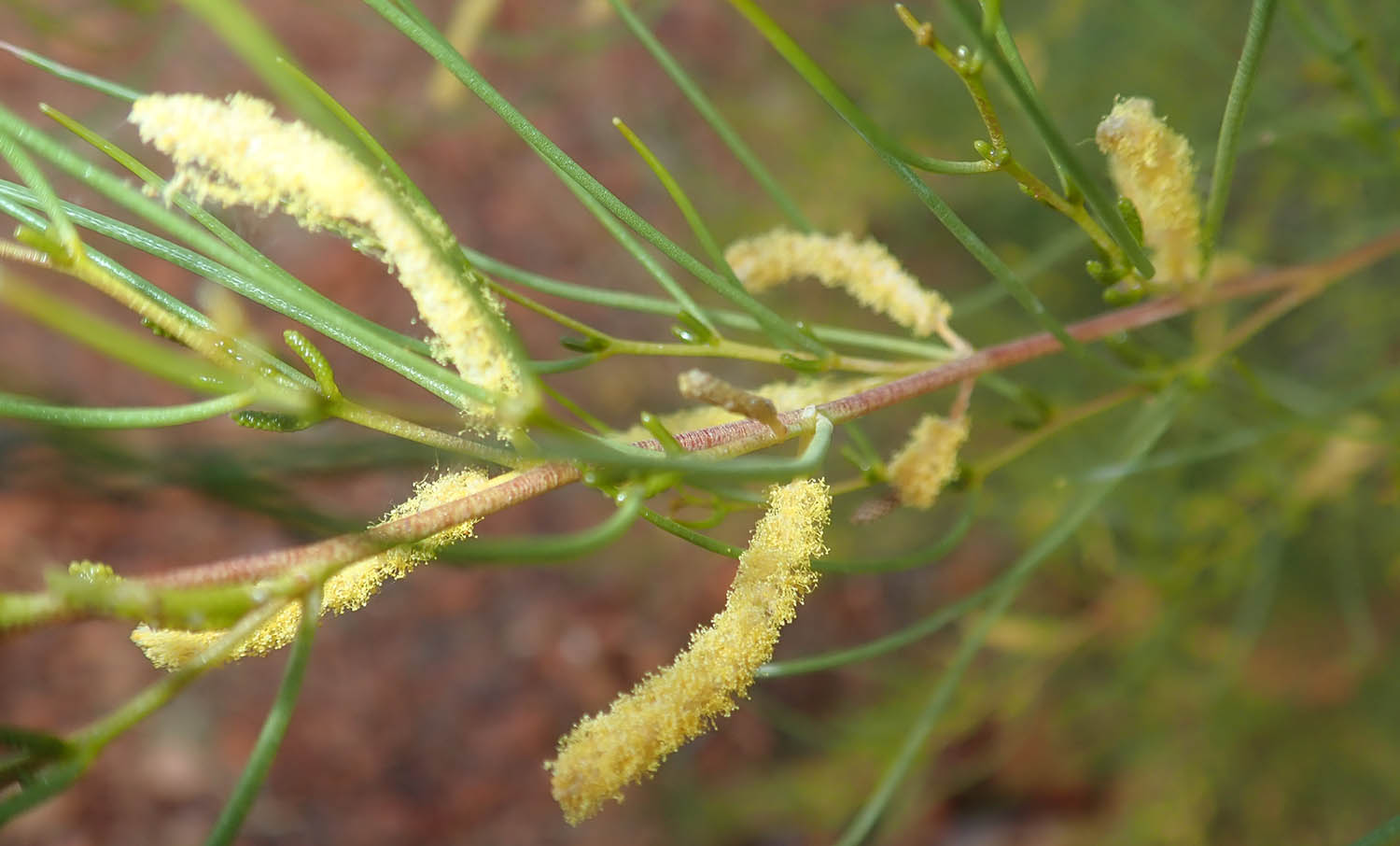 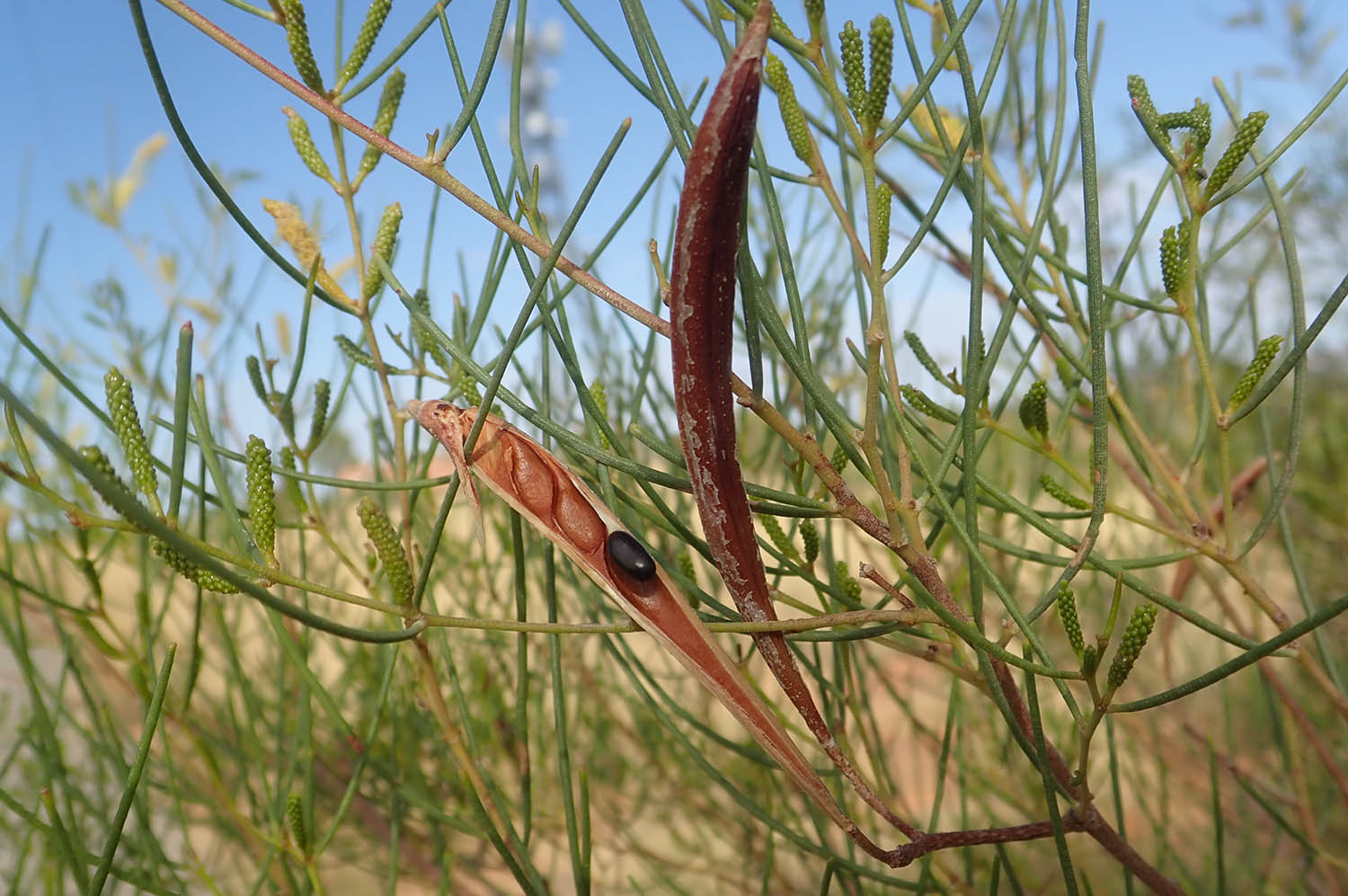 There are about 250-300 species in this genus. They are often synonymous with Cassia. They usually grow as shrubs or trees, with opposite paired leaflets, mostly with yellow flowers, and large seed pods. They are found throughout the tropics of the world. In Australia they grow mostly as shrubs and are common in arid areas and seasonally dry habitats. The flowers are usually pollinated by bees and often involved in ricochet pollination, where the pollen is ejected during buzz pollination and bounces off petals to land on the back of the bee. 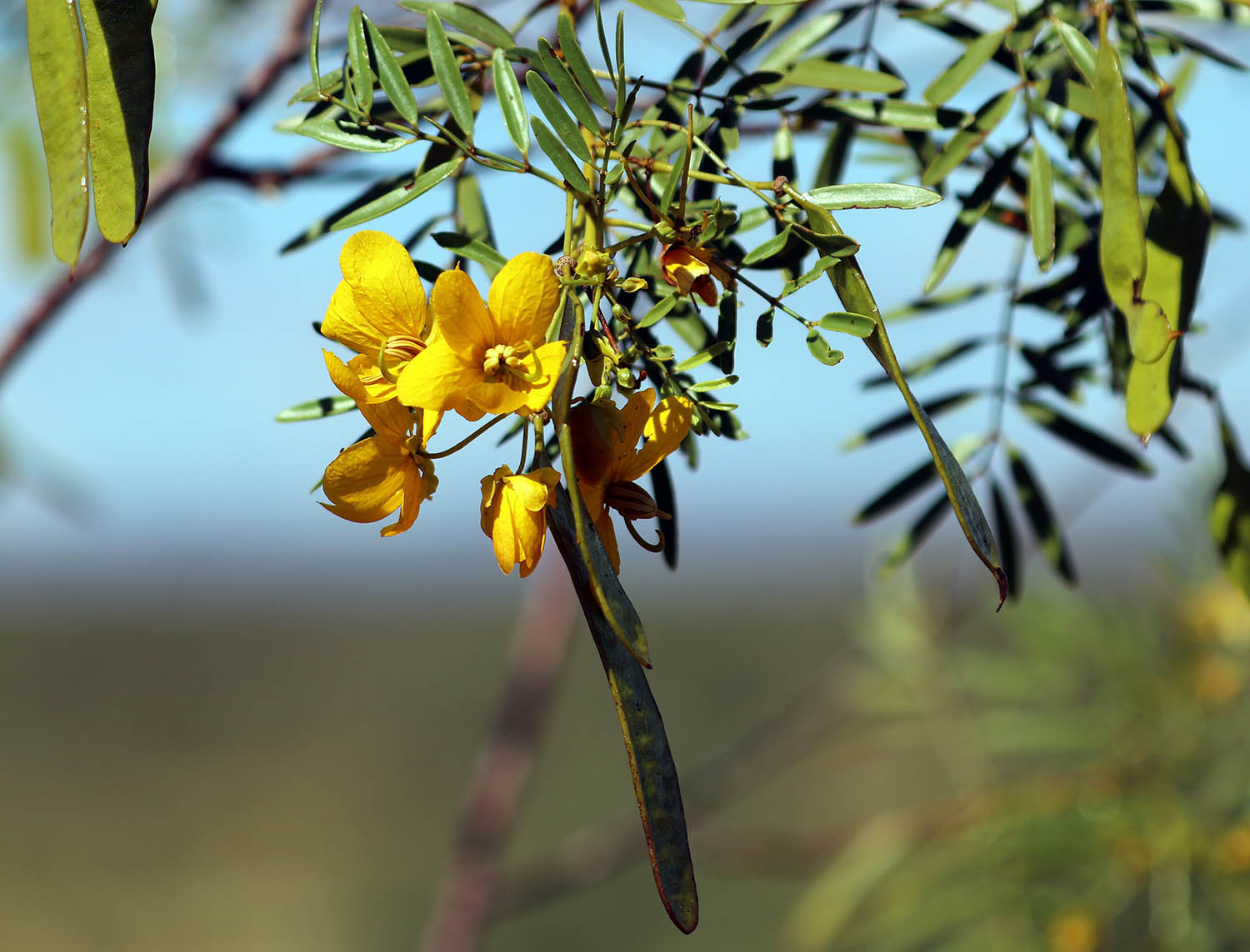 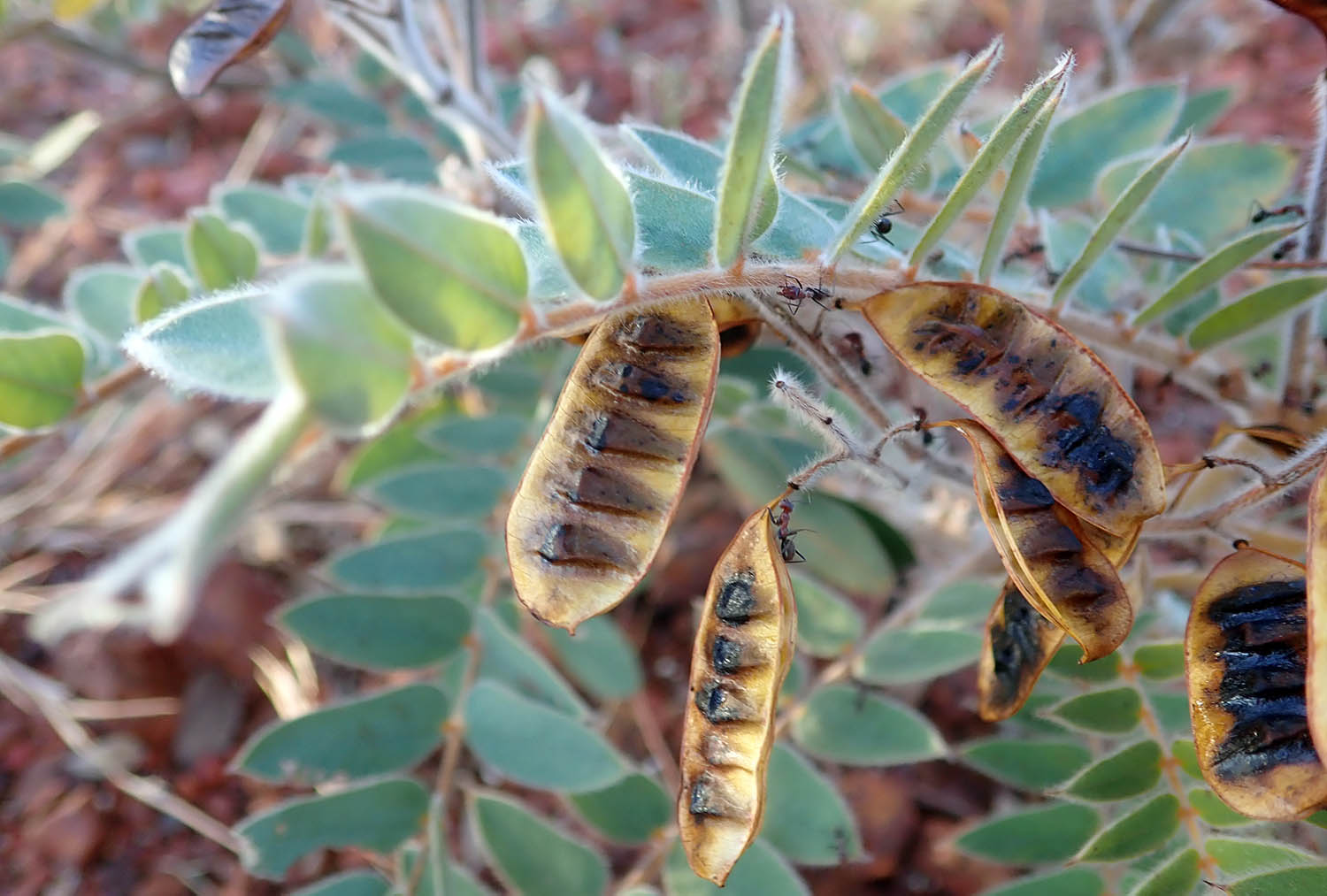 Senna notabilis, 'Cockroach Bush'. So called because of the shape and look of the seed pods. Found in arid and tropical woodlands across Australia.

The family Passifloraceae includes over 600 species, found mainly through the tropics of the world. They grow as trees and shrubs, but are most famous as vines. The leaves of most common species in this family are usually heart-shaped or lobed, and often have two glands at the base. A winding tendril is used to climb, and this sprouts from a bud at the base of the alternate leaves, a distinctive feature of the family. The flowers are both striking and unique, due to the many frilled ring. The fruits contain many seeds, which are surrounded by a pulpy aril.

There are over 370 species of passionfruit vines and they are found in the tropical Americas, Asia and the Pacific. The flowers have the distinctive ring of frills indicative of this family, Three long styles that ride atop the central stalk, and 5 drooping stamens slightly below and from the same central stalk. These distinctive and elaborate flowers were named by Spanish missionaries for the passion of Christ; the stigma and anthers representing the nails and the wounds, and the frills representing the crown of thorns (Hutton and Cassio 1996). There are several native and introduced species in Australia. 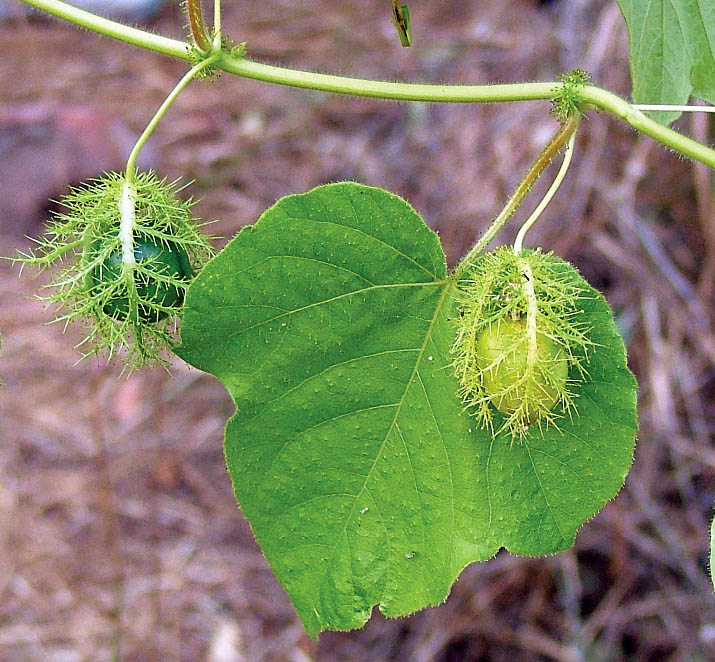 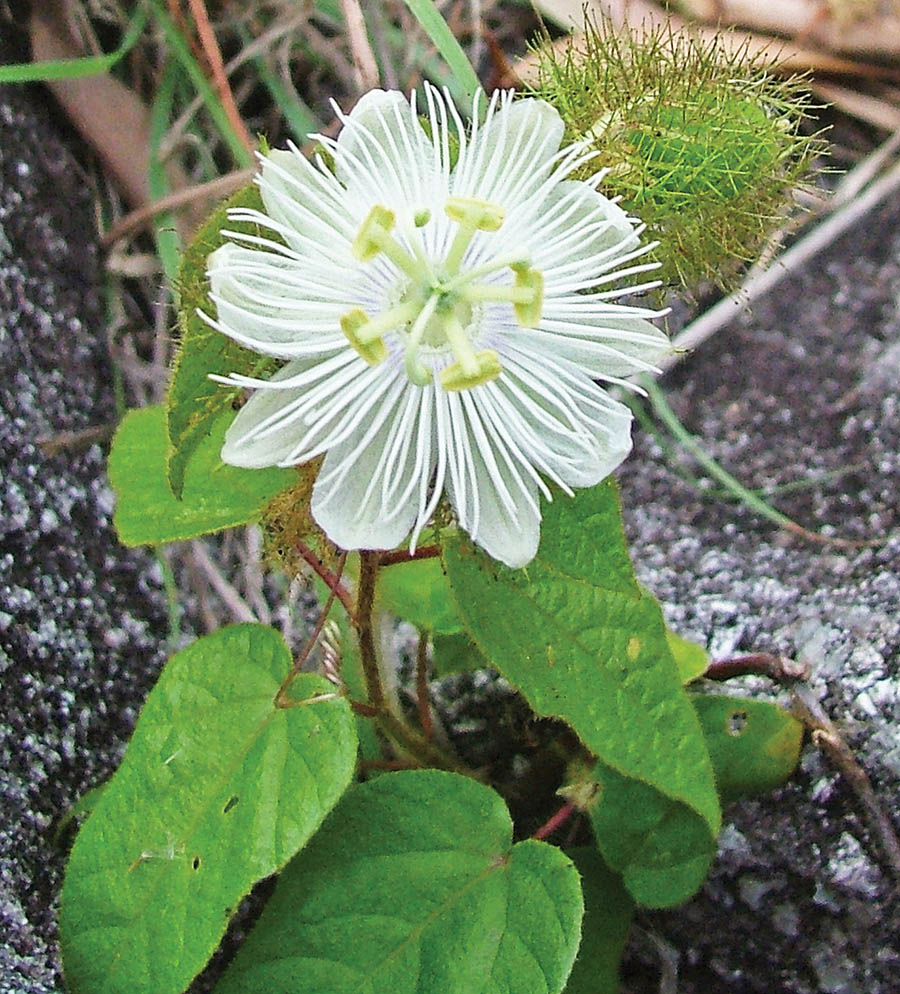 Passiflora foetida, ’Stinking Passionfruit’. One of the most common passionfruit species in tropical Australia. The leaves usually have 3 main lobes. The stems are hairy. As suggested by the name, they smell when crushed. Flowers and fruits in the dry season. Beautiful white flowers that open at night, and may seen early the next morning. Pale green spiky looking bracts beneath the flower contain the growing fruit in a ‘cage’. Fruit ripens from green to orange. Ripe fruit is edible, but rest of plant and unripe fruit are toxic. Native to South and Central America, introduced into Australia over a century ago. Also found throughout the tropics of the world.

The Baobab genus Adansonia is centred mainly in Madagascar, where there are 7 species. There are only another three species found outside this large island. The most famous species is a large spreading tree of the savanna in Africa. The two extant species in Africa are thought to have spread to mainland Africa from the Madagascar homeland. Given that Madagascar is located off the coast of Africa, this is not too hard to imagine. 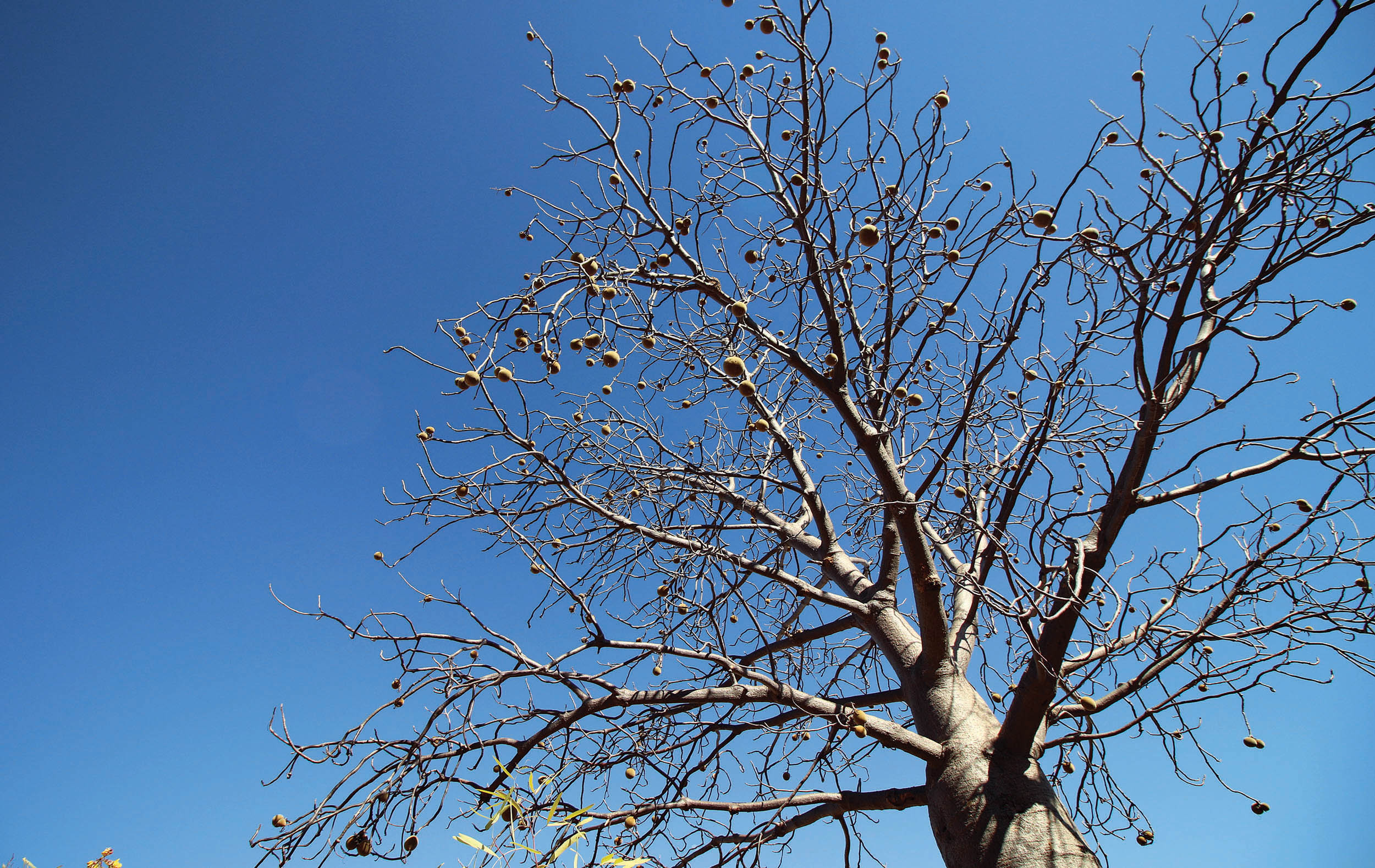 A leafless Boab with fruits

There is one species in the north-west of Australia. This ‘Boab’ is for many Australians a symbol of the Kimberley. But for biologists, we know this is as a genus of trees that define Madagascar and Africa. How on Earth did one species end up across the Indian Ocean in north-western Australia, and yet grow nowhere in between? The theories of how a Baobab may have crossed the Indian Ocean in the other direction to Western Australia vary widely and wildly. It was once thought that the genus was a Gondwanan relict and this explained it’s presence in Australia. However, the family (let alone the genus) is nowhere near as old as the break up of Gondwana 80-100 million years ago. Therefore, it has somehow been transported from Madagascar to Australia. The edibility of the flesh of the fruit hints at the idea that humans may have brought them, however, the species has been found to be older than the oldest evidence of any hominids in Australia, (so far). Thus, the only reasonable option left is that the fruits floated over. Parts of eggs of now extinct elephant birds from Madagascar have washed up on the shores of Western Australia several times, so it is possible the seeds of a ‘baobab’ have done the same. 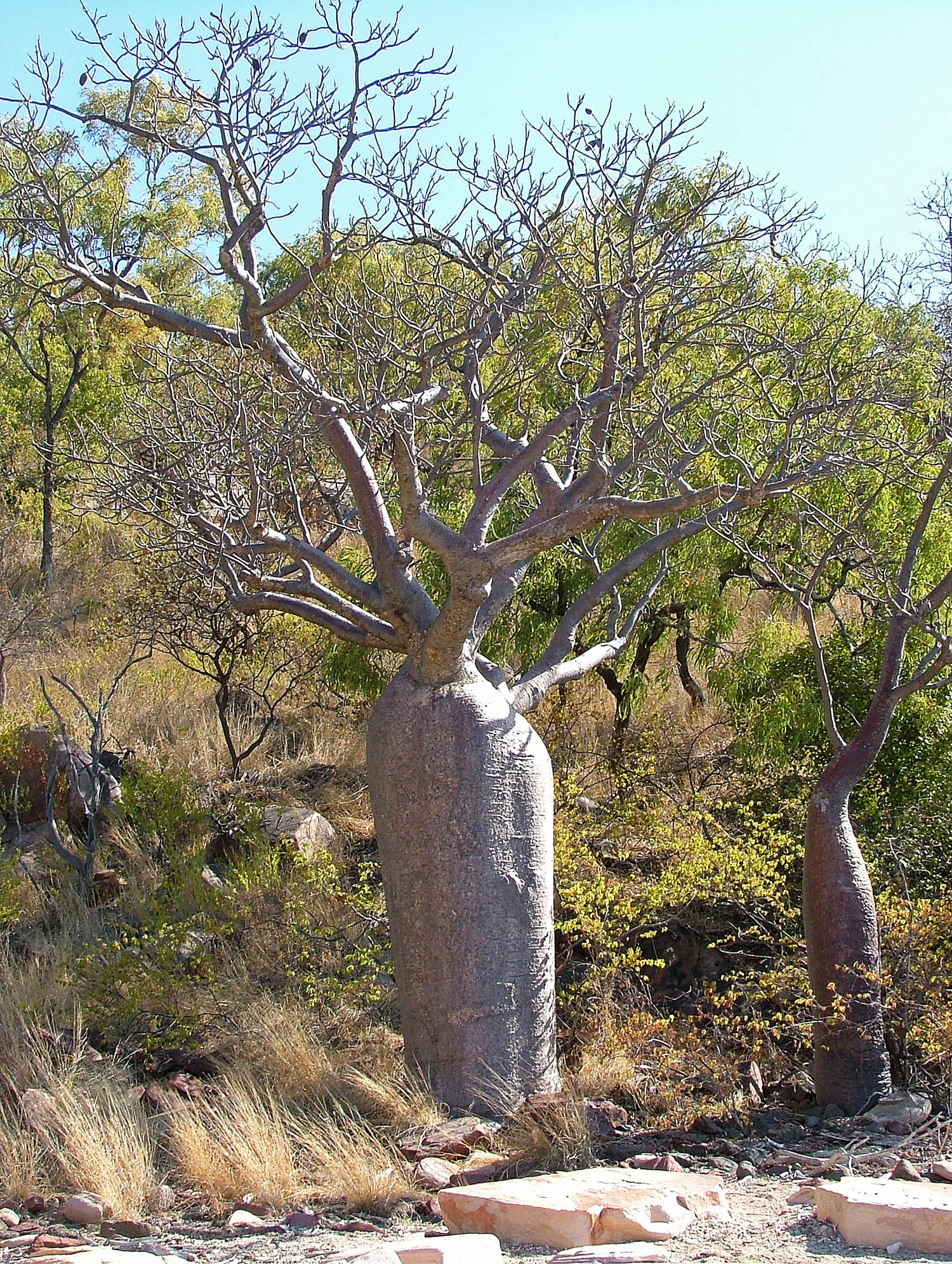 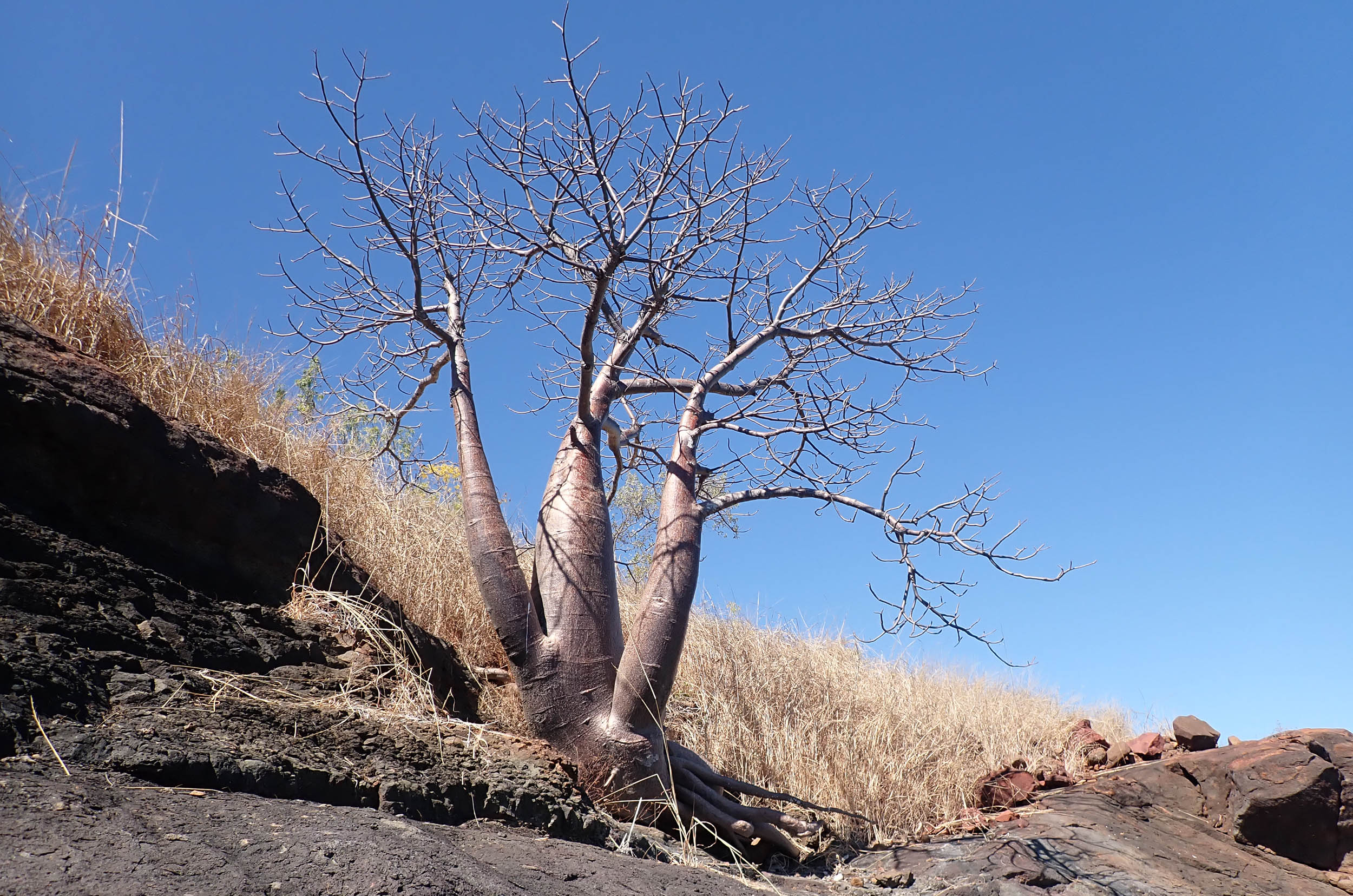 The shape of the tree is varied; this one on Sheep island has three trunks... 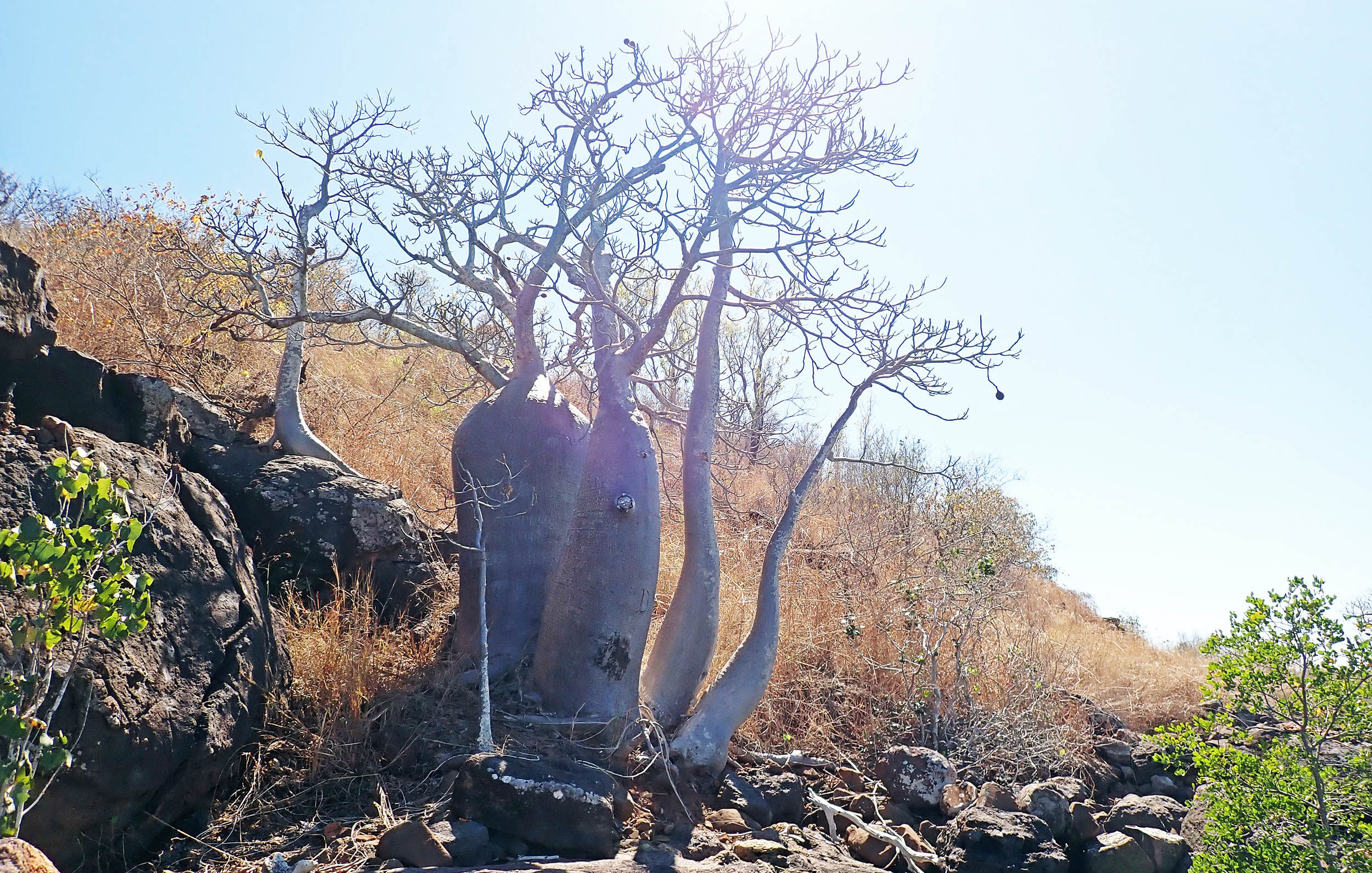 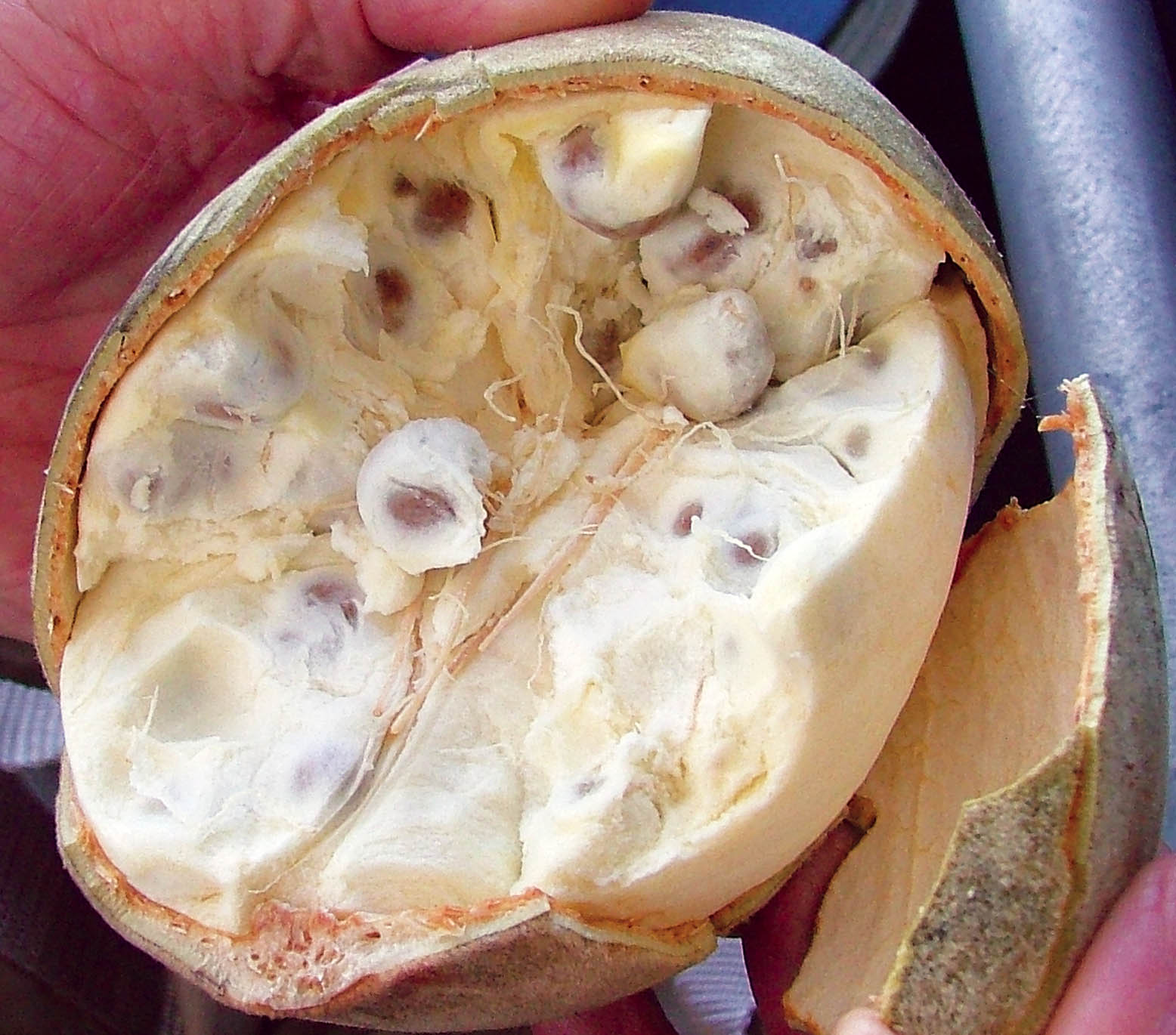 Fruit of Boab tree. The insides are edible: I describe the stiff flesh as 'lemony styrofoam'. 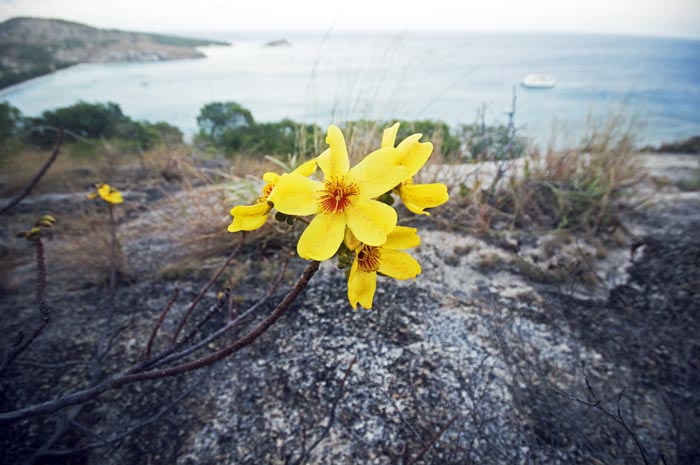 Cochlospermum gillivraei, 'Kapok'.  Found in the tropical woodlands of north-east Queensland, and into Northern Territory and New Guinea; seems especially common on the slopes of hills. 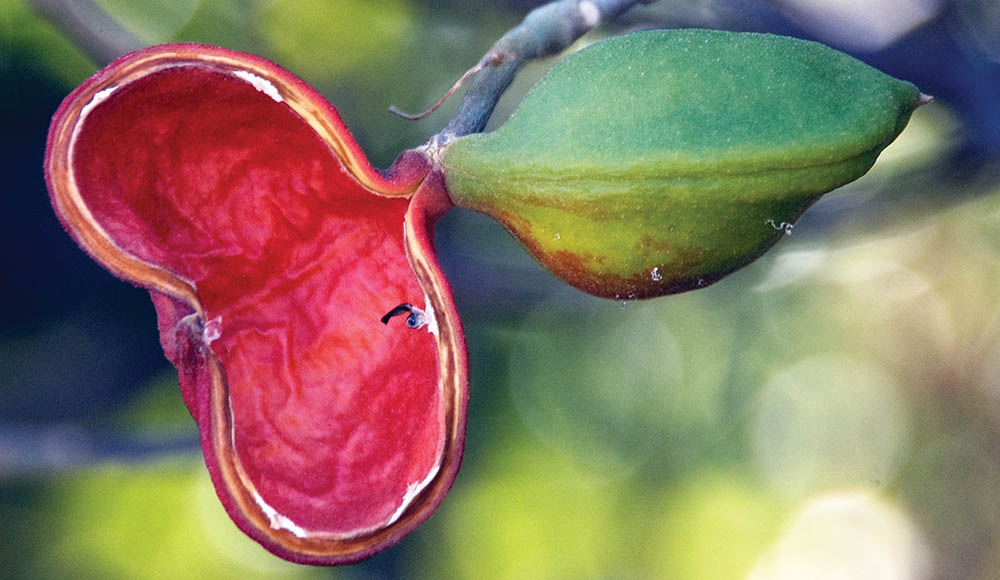 Sterculia species are found throughout the tropics of the world. The most common species in Australia are known as 'peanut trees' as their small black seeds (normally hanging down from the edge of the bright red hard fruit shell above) taste delicious, and indeed like peanuts.

Brachychiton rupetris, 'Queensland Bottle Tree'. Swollen trunk. Leafless in winter. Not to be confused with similarly shaped but different family of the Boab tree.

The family Myrtaceae is arguably the most important on the Australian continent, and are common and dominant in the woodlands.

The most useful diagnostic feature of this family are the leaves and their obvious oil glands, which may appear as light dots when the leaves of certain species are held up against bright light. The flowers in the Myrtaceae family are usually quite showy, but not in the usual way; instead of colourful petals, there is instead a seemingly unlimited number of stamens, giving the flower the appearance of a brush.

Botanists often divide the family into two different sub-families. One group are the ‘woody-fruited myrtles’. These are dominant in drier parts of our continent, and include the classic Australian genera such as Eucalyptus, Melaleuca and Callistemon, and are common in the woodlands just behind the coast along most of Australia. The other group, the ‘soft-fruited myrtles’ are usually associated with wetter environments and found mainly in the tropical rainforests. 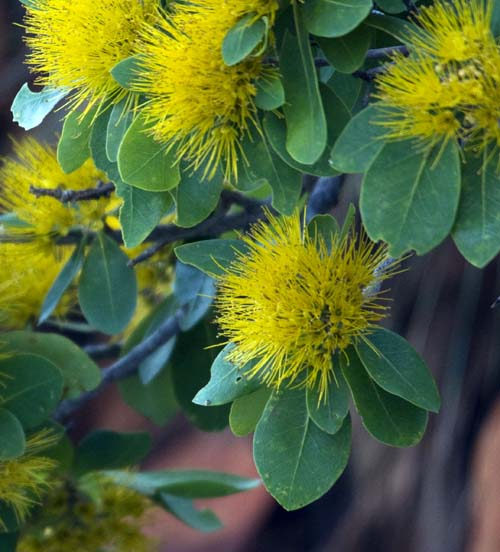 This genus contains some 120 species. They are herbs or small shrubs. They usually have pink flowers that hang down like a tail, and thus are often nicknamed pussycat, lambs or fox 'tails'. One of the Aboriginal names that has stuck is 'Mulla Mullaa'. They are found in open habitats across Australia, and are endemic to that continent. Some species can be found in the understory of drier tropical woodlands. 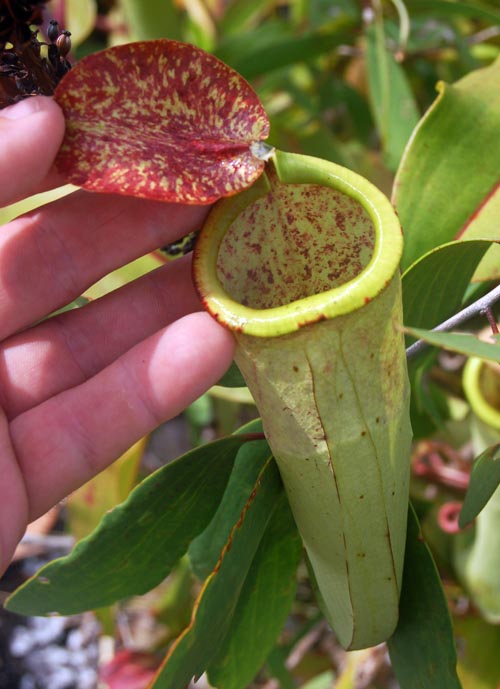 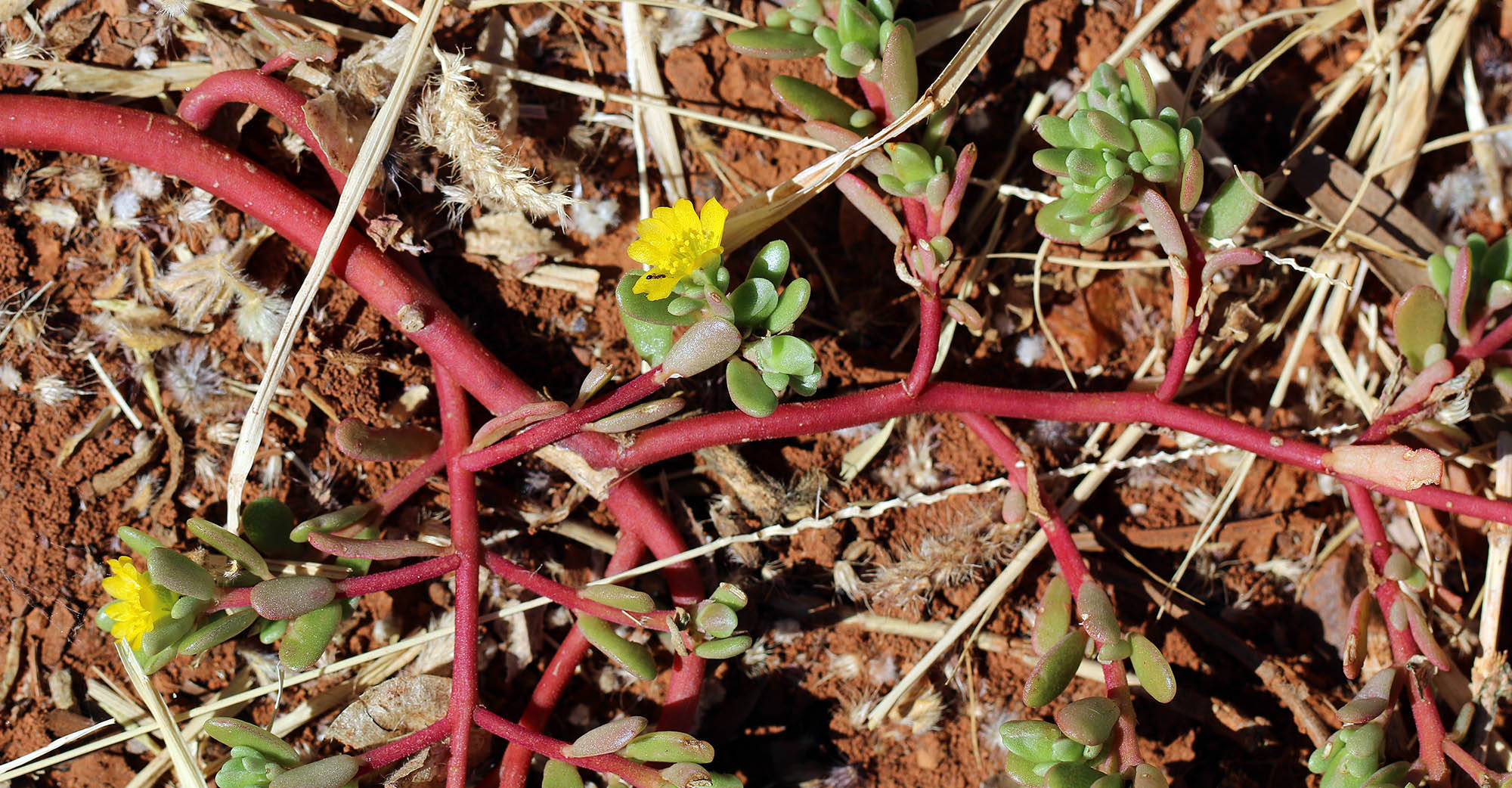 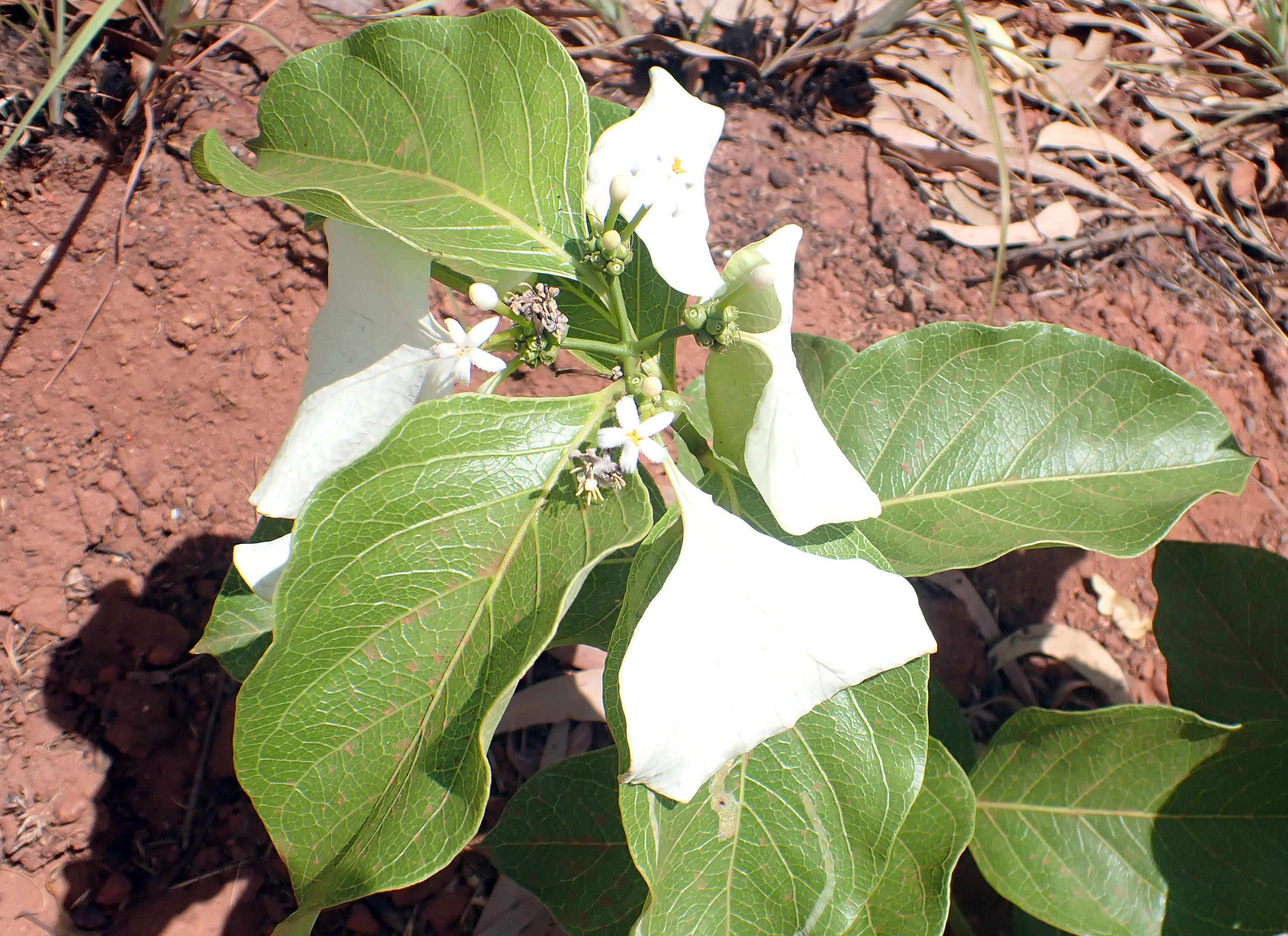 Morinda reticulata, 'Mapoon',Ada-A Morinda', 'Yellow Dye' . Small shrub with small white flowers but large and striking white leaves. Apparantly grown in gardens in North America, but not commonly in it's native country of Australia. (It may be the same as Coelospermum decipiens?) 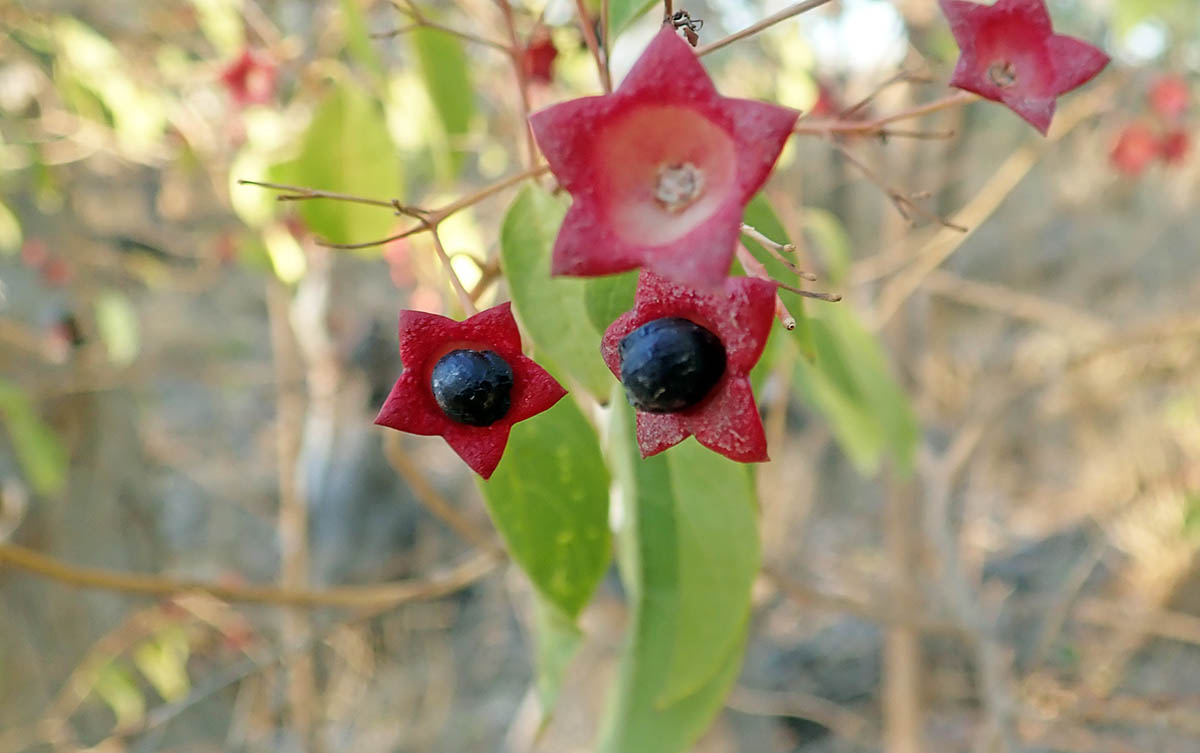 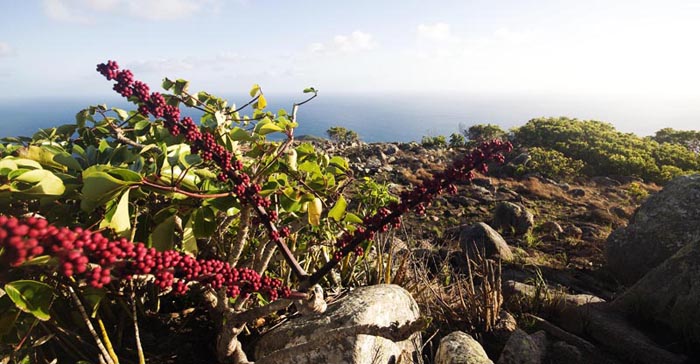