The three bowerbirds that can turn up in tropical woodlands look similar; the males all have pink feathers on the back of the neck and build an avenue bower. The Great Bowerbird is the plainest and lives across northern Australia, the Spotted Bowerbird is found further south and inland in more arid woodlands in the eastern third of Australia, and the Western Bowerbird lives in gullies in much drier regions in the centre and west of Australia. 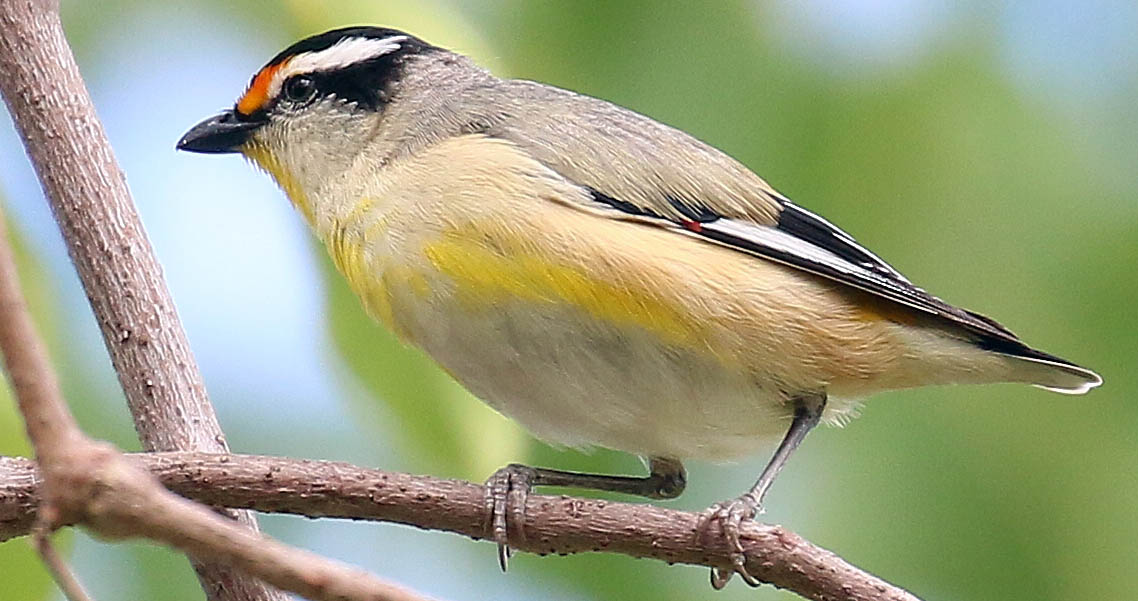 Pardalotus striatus, 'Striated Pardalote'. This bird varies in its wide range and was thus initially thought to be four separate species, but they are now classified as one. Pictured above is the subspecies '(western) Black-headed Striated Pardalote' Pardalotus striatus uropygialis. As suggested by the common name, the Striated Pardalote often has streaks on head. These tiny birds are more often heard than seen, with a familiar and fast repeated sharp double note (or triple) call. Striated Pardalotes are found in open habitats across most of Australia, but are less common in the centre. They feed in the top of Eucalyptus trees.

Pardalotus rubricatus, 'Red-browed Pardalote'. This bird differs from the Striated in having more spots that streaks on it's crown (although not quite to the extent of the Spotted Pardalote), as well as a large orange window in it's wing (neither can be seen in awful photograph above, sorry). It has a an orange spot above eye, which is more orange and less yellow, and set further back from the beak than any similar marks on the Striated Pardalote (this can be seen in the photograph above). Like other pardalotes, these tiny birds are more often heard than seen, with a familiar and fast repeated sharp and increasing six note call. Red-browed Pardalotes are found in open habitats across Australia northern and central Australia. They mostly feed on lerps in the top of Eucalyptus trees. They usually nest in small excavated burrows in sand.

This family has been recently revised and includes many different types of birds. In the Australian tropical woodlands they constitute many of the small and initially indistinct birds of the forest, also known colloquially as ‘little brown jobs’.

Acanthiza chrysorrhoa, 'Yellow-rumped Thornbill'. Streaky black and white head, yellow rump and underbelly. Found in open habitats across much of the lower two thirds of Australia, including southern tropical woodlands.

For the page on the honeyeaters of the Australia tropical bush

There are five species in this mono-generic family. They are all endemic to Australasia. They were named 'babblers' because they were once thought to be related to the babblers of Asia. Like some of the larger Old World species, they are indeed noisey and have long de-curved bills, and bounce around on the ground or in the lower levels of the canopy. However, they are not at all closely related, with the Asian family being larger and diverse, and the Australasian family being small and an older lineage. 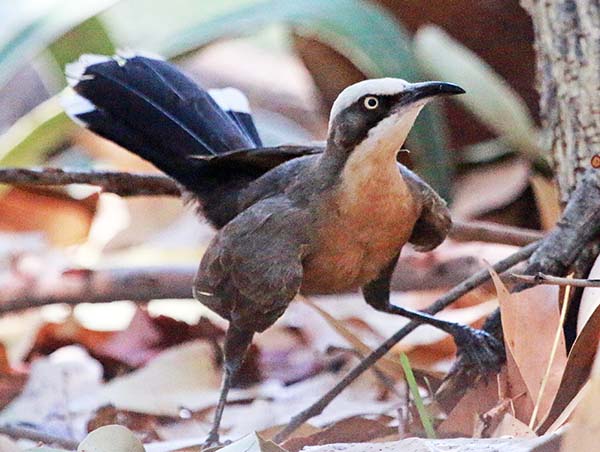 Pomatostomus temporalis, 'Grey-crowned Babbler'. Noisy birds that hang out in gangs that often make almost comical sounds. Found in open habitats across much of Australia, except for inland and southern coasts. 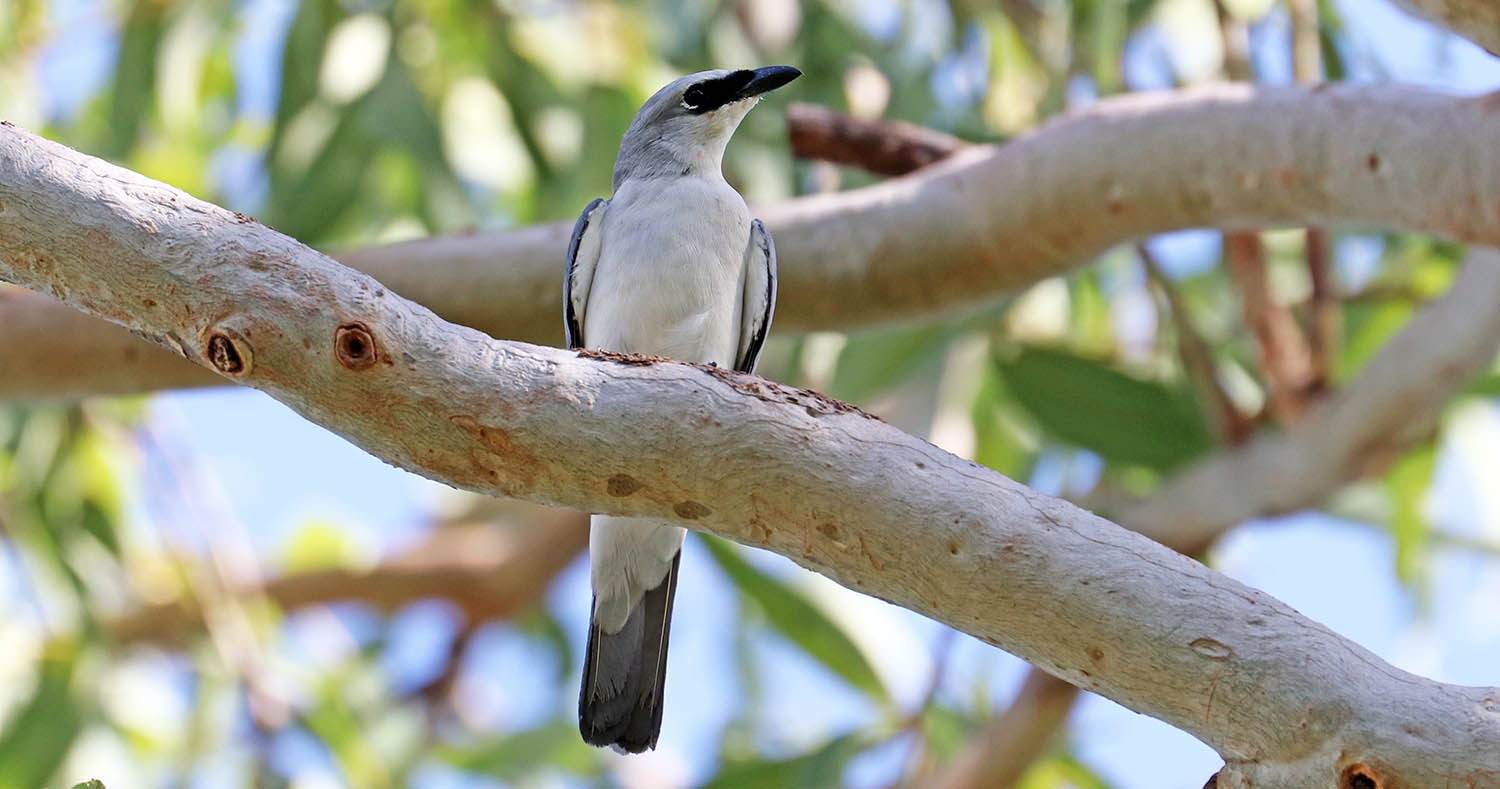 Coracina papuensis, 'White-bellied Cuckoo-Shrike'. Found in a variety of habitats across Australia, New Guinea and Solomons.

Lalage leucomela, 'Varied Triller'. Found along east coast and across north of Australia, as well as into New Guinea. 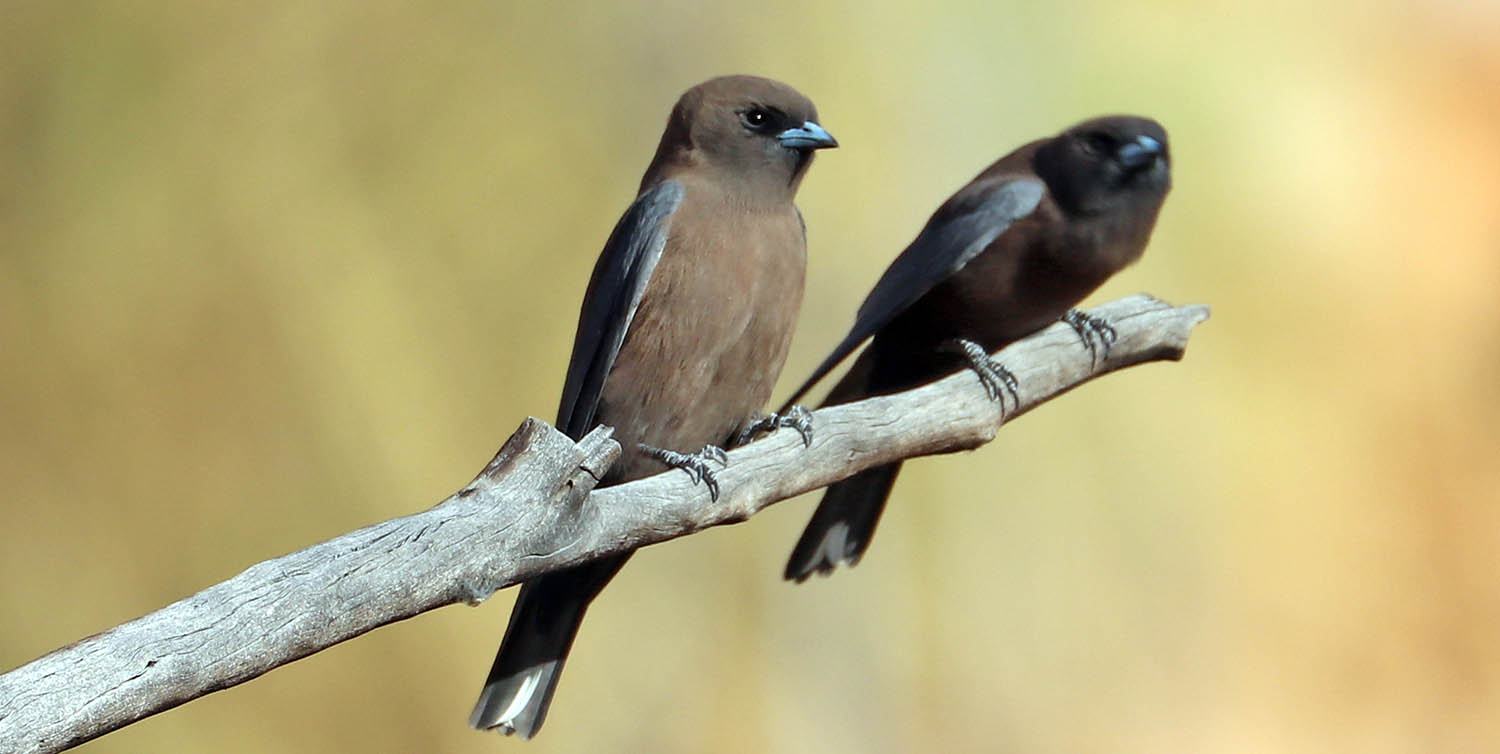 Woodswallows are small fast birds that hawk like swallows or swifts, but are not closely related to either. On cooler mornings, they can often be seen squeezed together in tight groups. 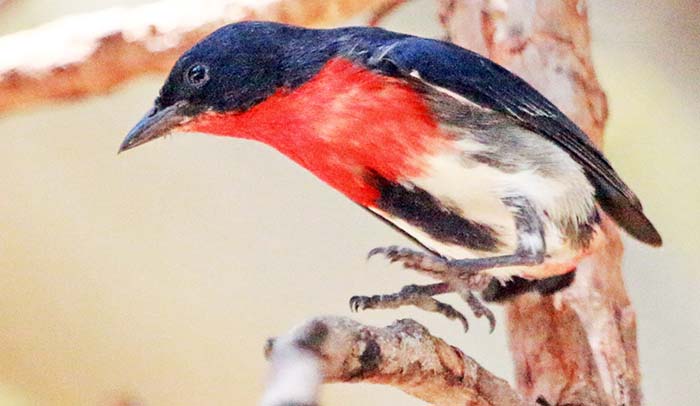 Dicaeum hirundinaceum, 'Mistletoebird'. As suggested by the common name, feeds on mistletoe berries and disperses sticky seeds by wiping them tree branches. Found across most of Australia, except western deserts and Tasmania. 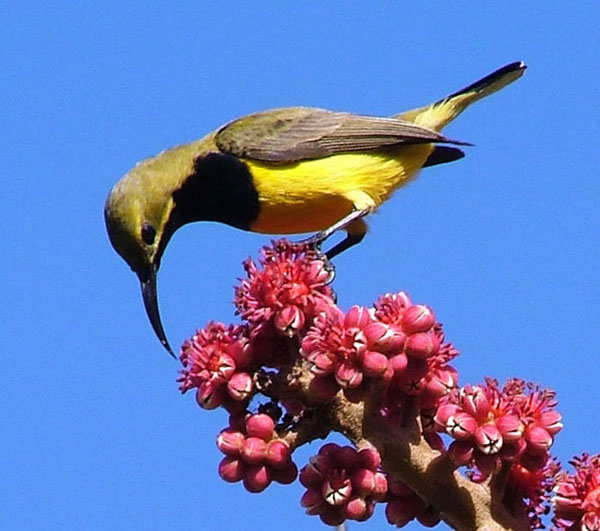 Cinnyris jugularis, 'Olive-backed/Yellow-bellied Sunbird'.  Bright yellow. Male has throat patch which with right light, is stunning iridescent metallic blue. Inhabits various habitats, mostly mangroves and rainforest, but it is also found in more open habitats and urban areas. The only sunbird found regularly in Australia. Distributed from north-east Queensland, into Solomon Islands, New Guinea, and north into south-east Asia into southern China. However, this widespread and adaptable species is being split into different species.

They are not related to the 'true finches', sparrows or buntings. Because they mostly feed on the seeds of grasses, they are sometimes knows as 'Grass Finches' to differentiate them from other birds called 'finches'. They are mostly found in the tropical parts of the Old World, with two main radiations in Africa and Australia.

These birds are common and diverse in the tropical woodlands of northern Australia. Because they eat seeds, they need to drink most days. Therefore, to see them, it is best to hide near a waterhole in the morning at the end of the dry season. 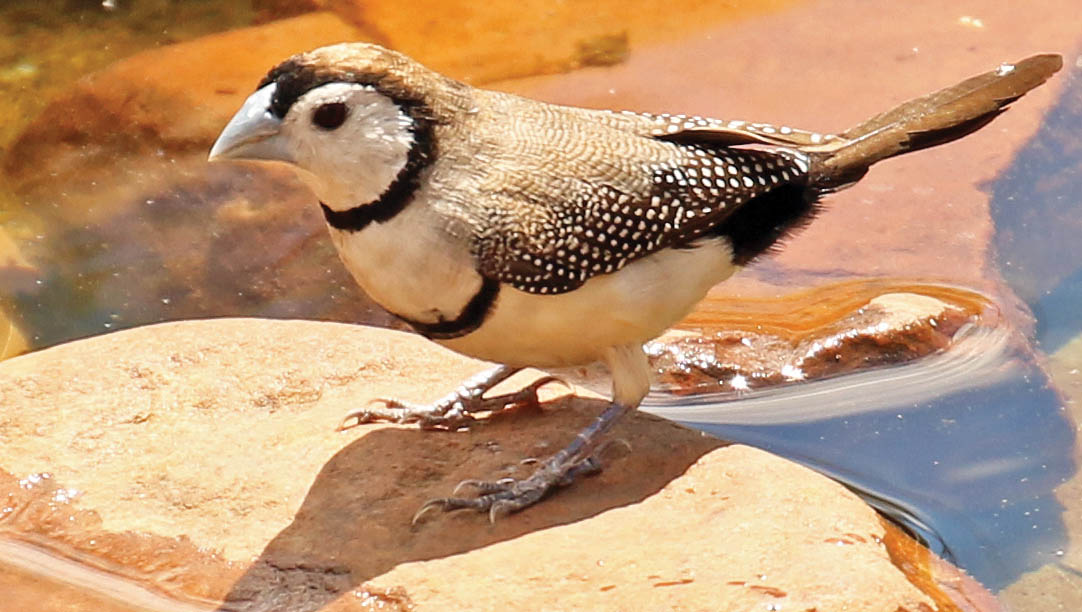 Poephila acuticauda, 'Long-tailed Finch'. Found in tropical open woodlands from the Kimberley to the Gulf of Carpentaria. 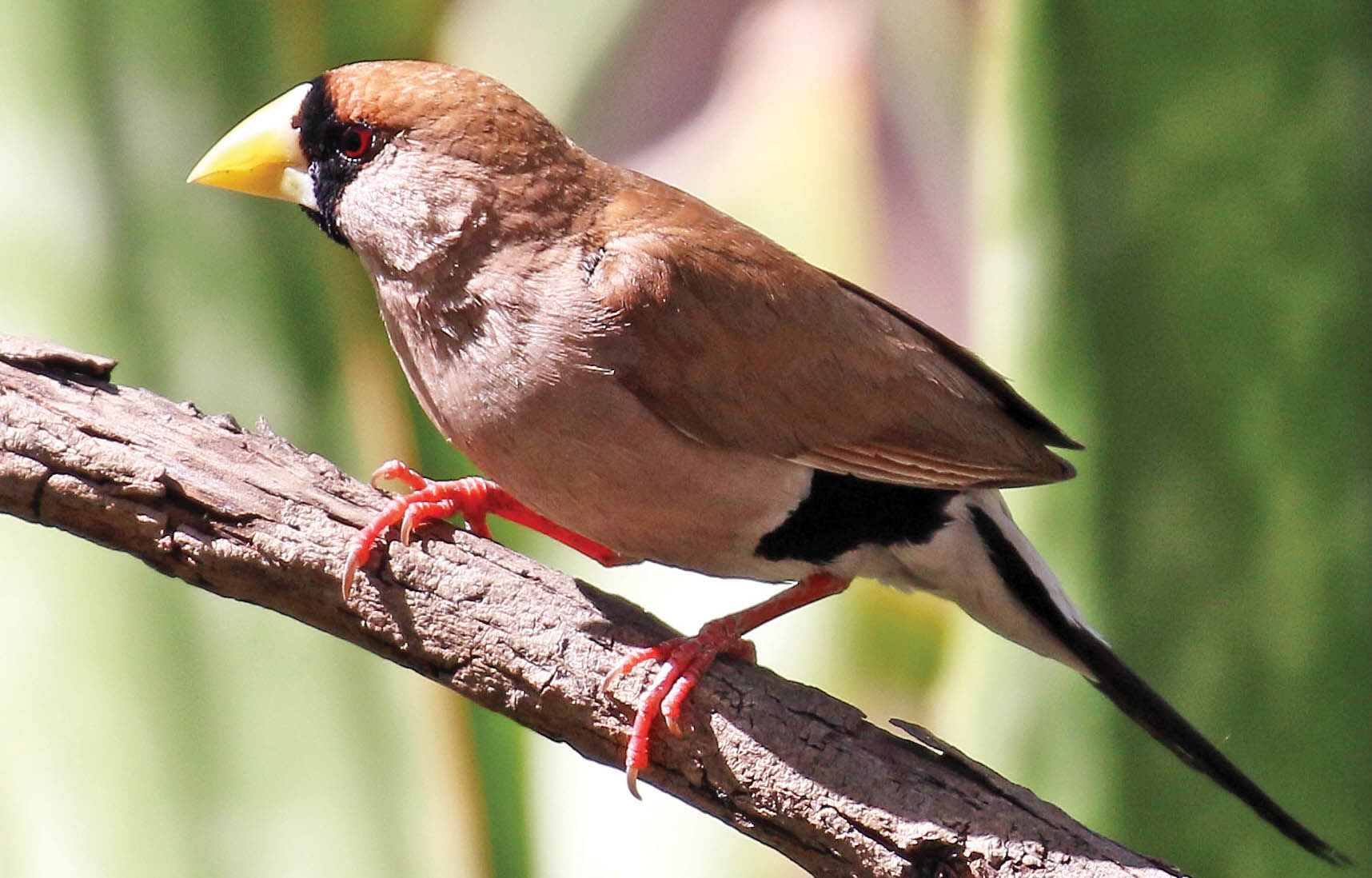 Poephila personata, 'Masked Finch' . Found in tropical woodlands, often near Pandanus at freshwater, across the top of northern Australia.

Bathilda ruficauda, 'Star Finch'. Usually found around freshwater in tropical savanna. They are distributed patchily across northern Australia, where they occur in three subspecies. They are sometimes seen in large flocks. They are apparently a popular caged bird. 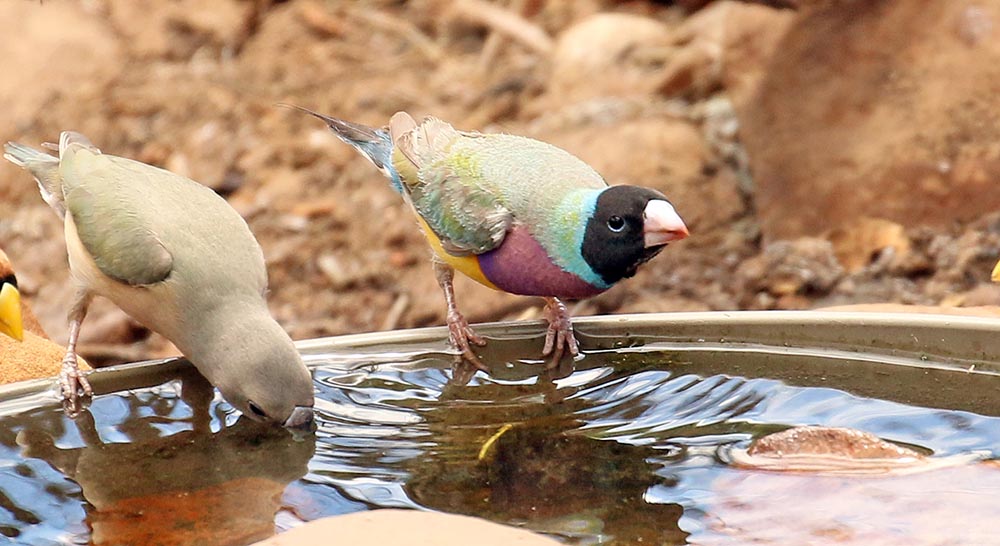