One of the most diverse floras in the world...

There are only two species in this genus and they are both endemic to southern South Africa. They often commonly called 'Lilles' however they are not in the true Lily family. (outside of Cape Town)

Amaryllis belladonna, 'Belladonna Lily'. Native to southern South Africa, but widely introduced and naturalised throughout the temperate areas of the world.

The family Proteaceae is naturally distributed mostly in the southern hemisphere, including South America, Australasia and Africa. They are most diverse in the small heathland regions of south-west Australia and southern South Africa. There are over 80 genera and over 1,600 species. 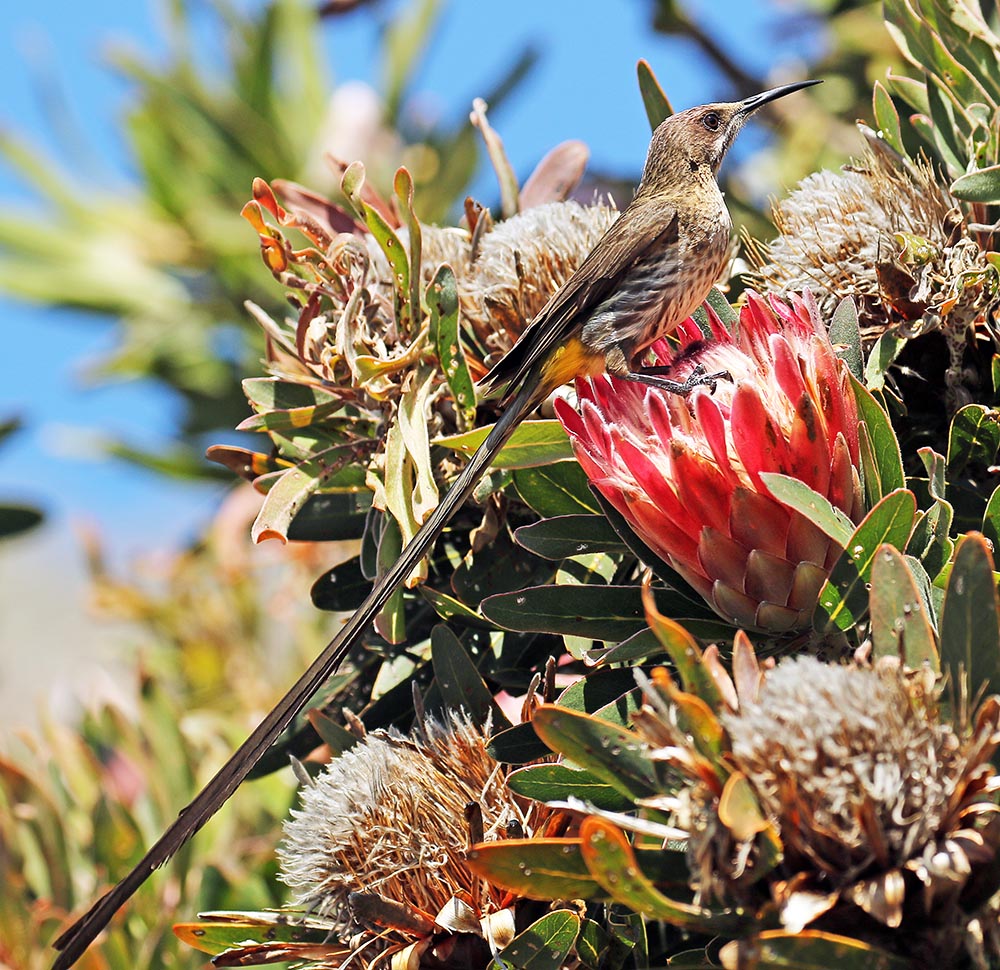 The species of Proteaceae in South Africa include some of the biggest and showiest flowers in the world. They attract nectar feeding birds such as sunbirds and sugarbirds.

This is the type genus for the family. There are over 70 species. They are found in Africa, with over 90% of species being endemic to the Cape floristic region of southern South Africa, where they are known as suikerbos. However, they are very popular as cultivars in gardens around the world. 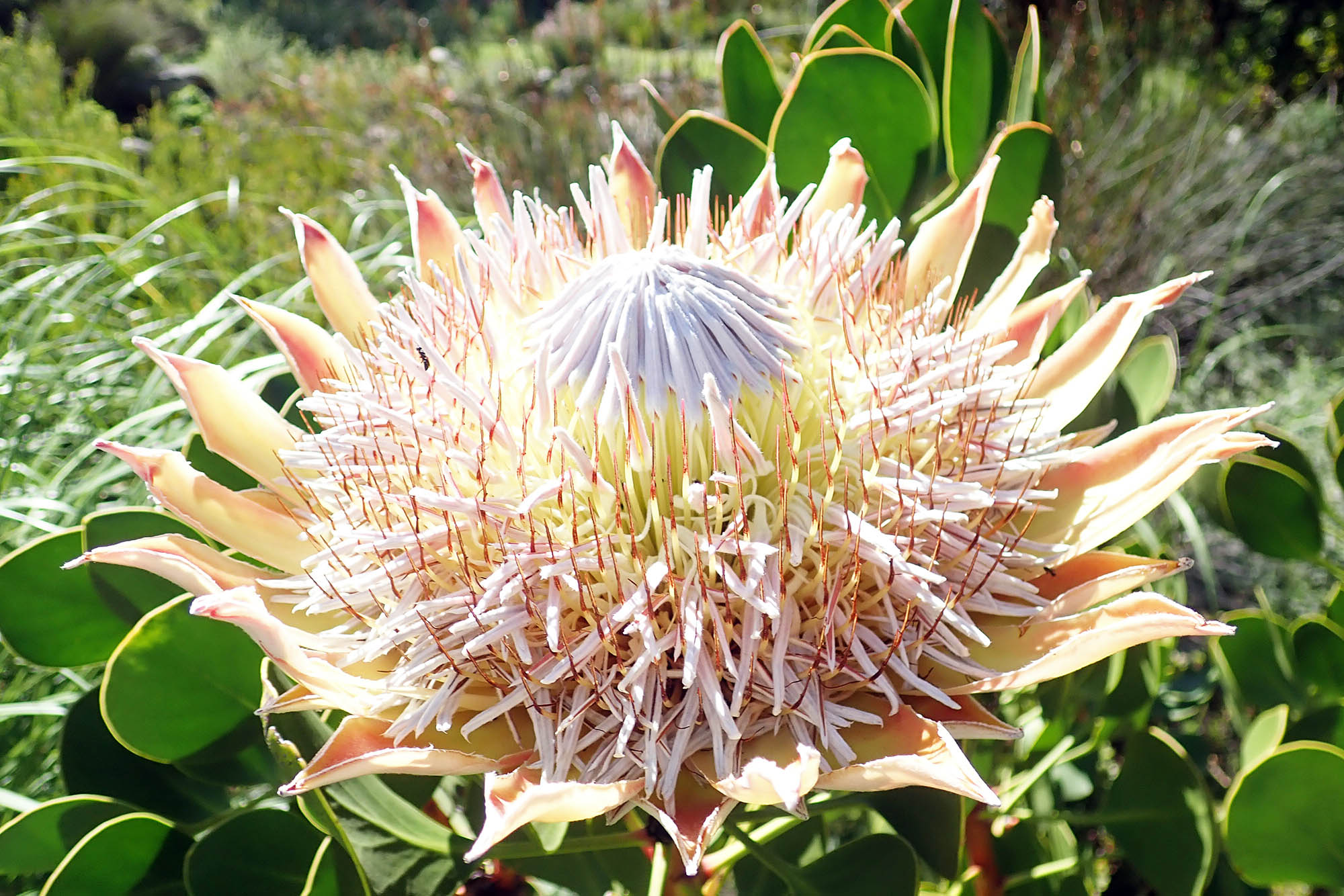 Protea cynaroides , 'King Protea'. It has the largest flower head of all the Protea.  It is thus the showiest and most popular of the Proteas in gardens, with over 80 varieties produced. It is also the national flower of South Africa. Endemic to southern South Africa. 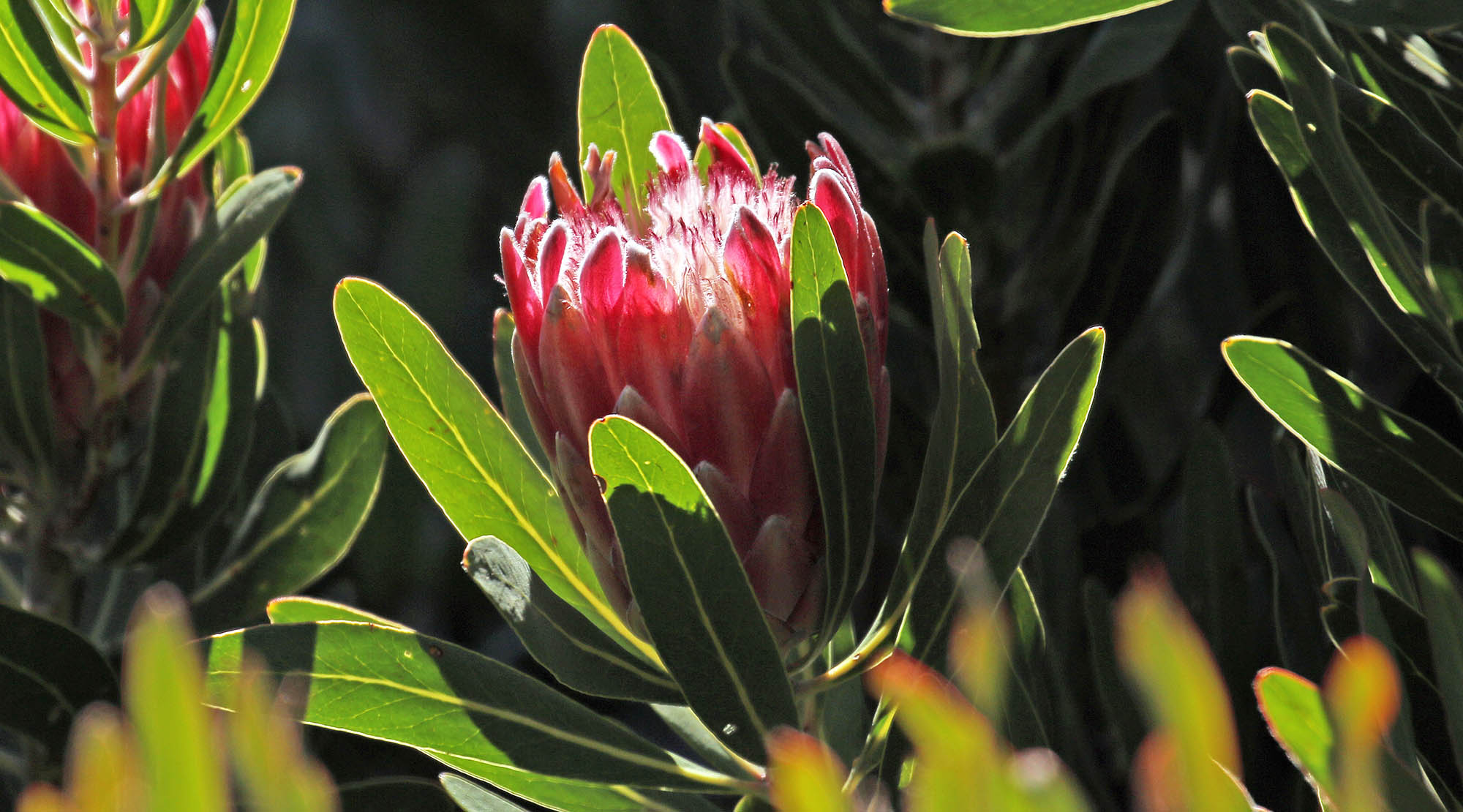 Protea repens, 'Sugarbush'. The leaves are slim and stick up. Endemic to southern South Africa, although a wider distribution than many other Proteas. One of the most popular Proteas to garden. The similiar Protea neriifolia, 'Oleander/Narrow-leaf Sugarbush', 'Blousuikerbos' has black tips to the flower.

There are 48 species. They are distinguished by long styles with thickened pollen presenter at the ends. Most are found in southern South Africa. 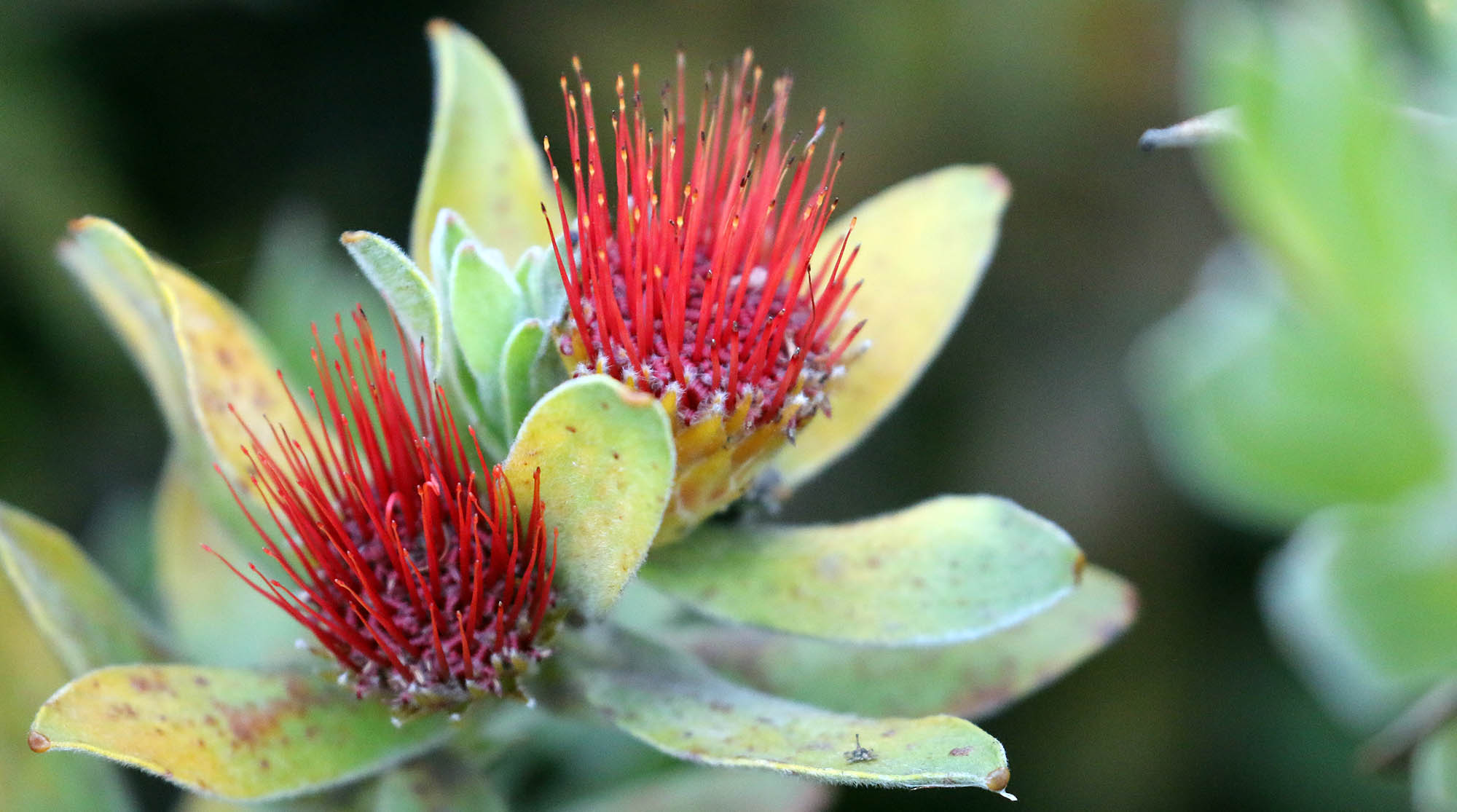 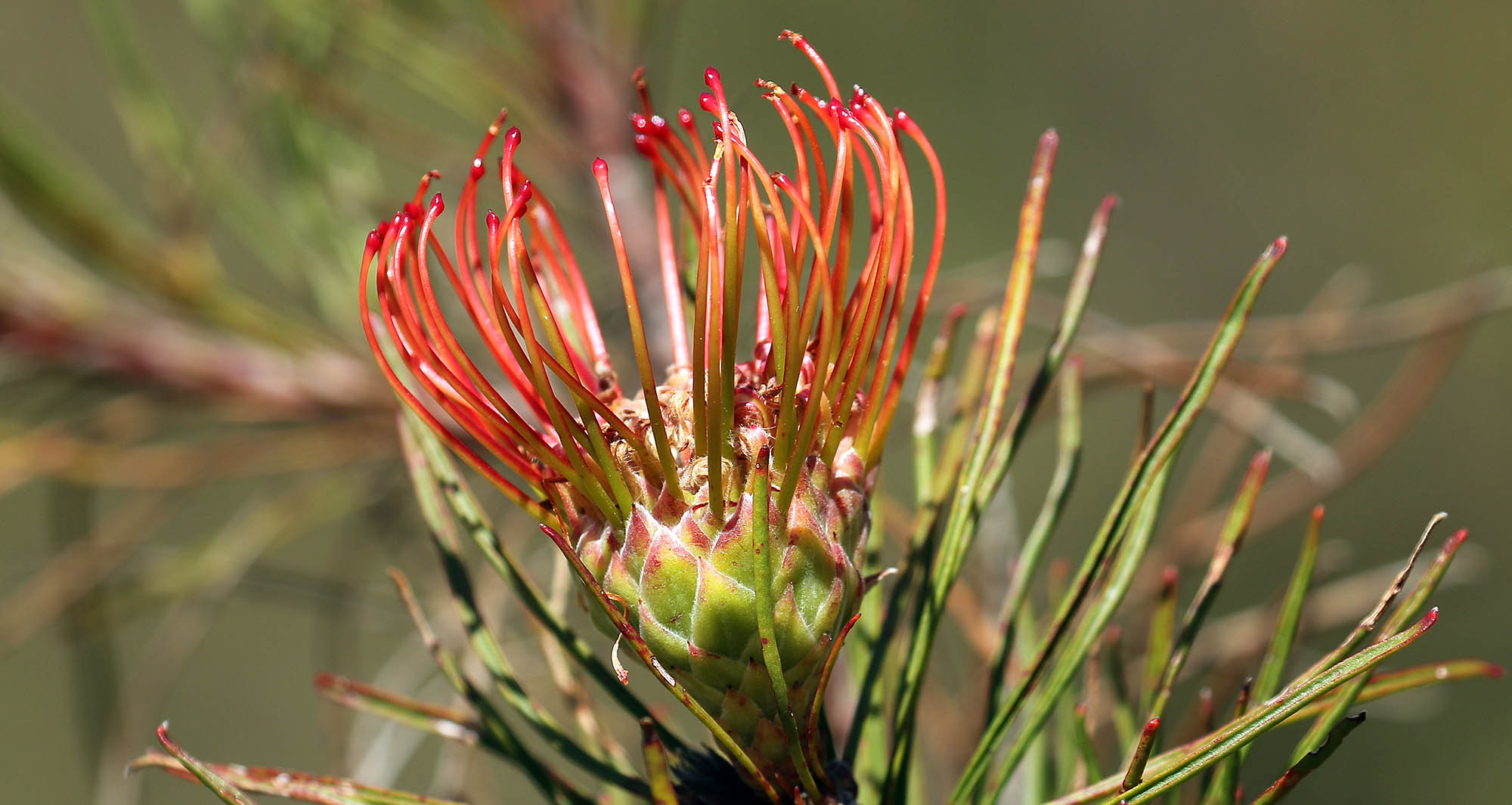 There are 13 species. The leaves usually stick out evenly and at an upward angle from the erect branches, with the flowers poking out regularly from between the leaves. All species are endemic to southern South Africa. 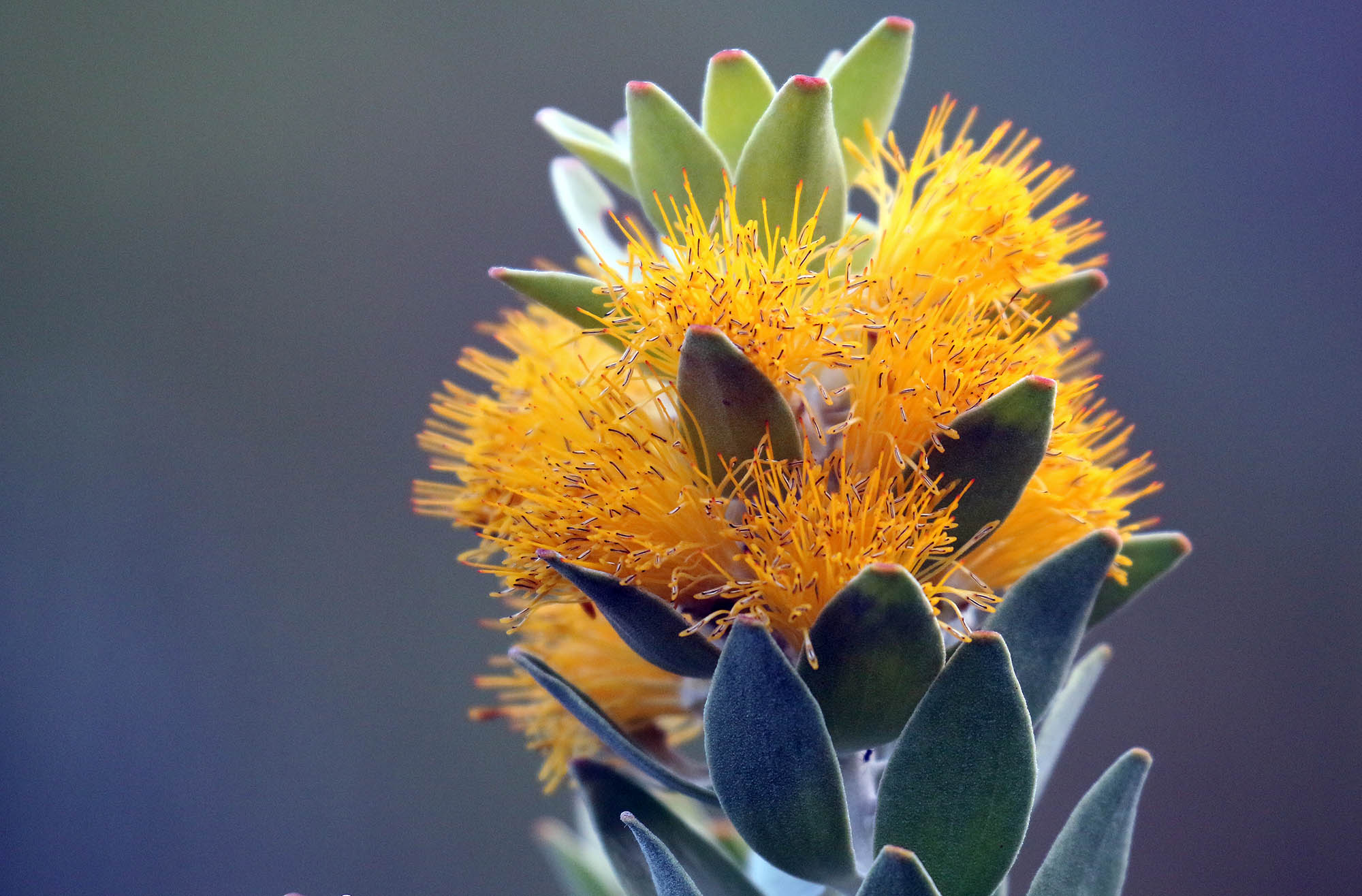 Mimetes chrysanthus, 'Golden Pagoda'. The flowers are much more prolific than in other Mimetes species, and coloured bright orange-yellow. The species is known only from two locations in south-western South Africa. This family includes over 800 species contained in 6 or so genera, including the Geraniums. They grow as herbs or very small shrubs. The flowers are often lobed.

The 800 species in this genus are often commonly known as 'Geraniums', although there is a closely related genus called Geranium. Unlike the 'true Geraniums' which are annual flowers in temperate climates, the flowers in this genus are perennials that live in sub-tropical areas. And while true Geranium have actinomorphic flowers (having a symmetrical shape) the Pelargonium are zygomorphic, often with two larger petals sticking up above and three petals hanging out below. Although there are various species across the Indo-Pacific area, 90% of species are found in southern South Africa. There are also many hundreds of garden varieties 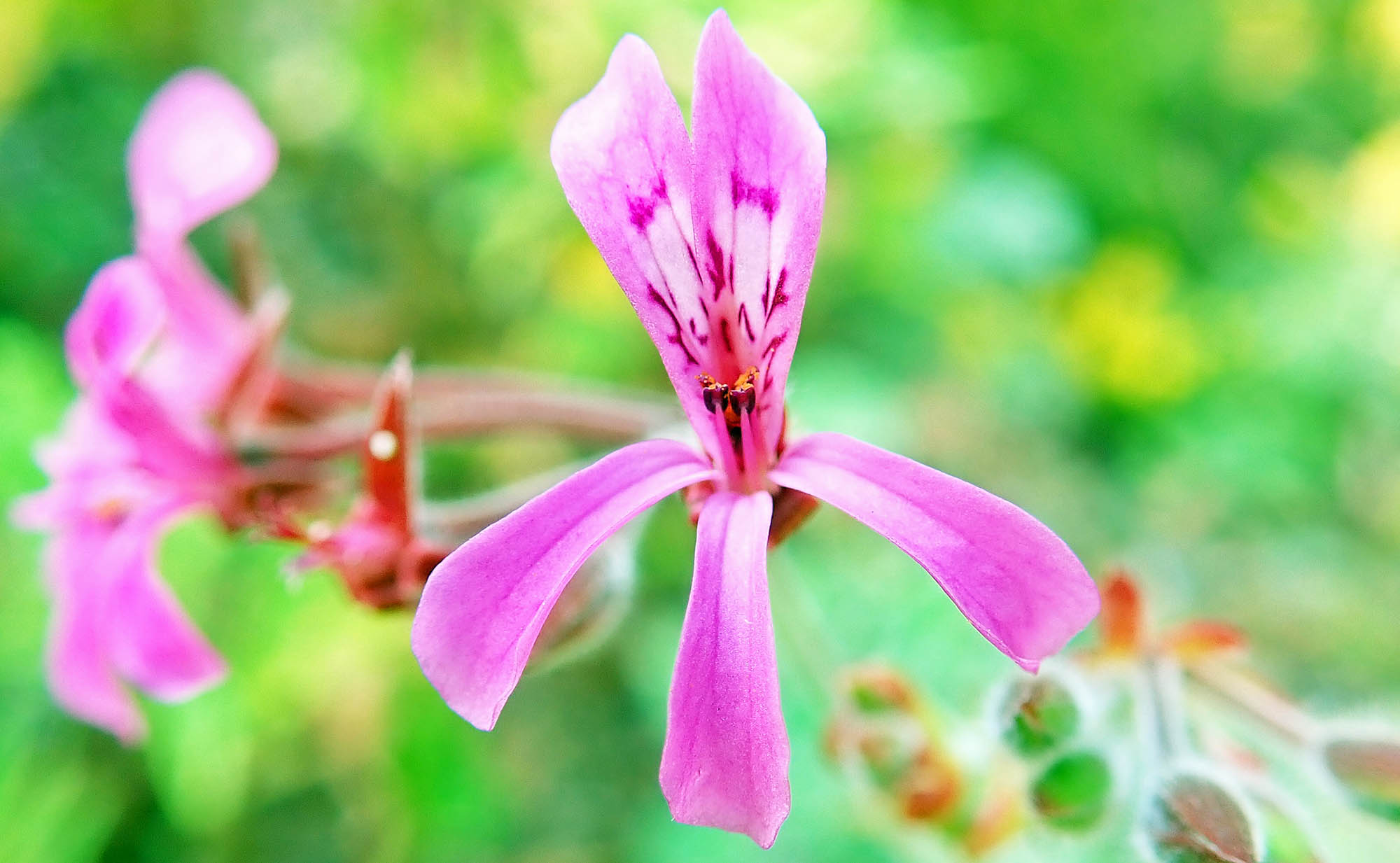 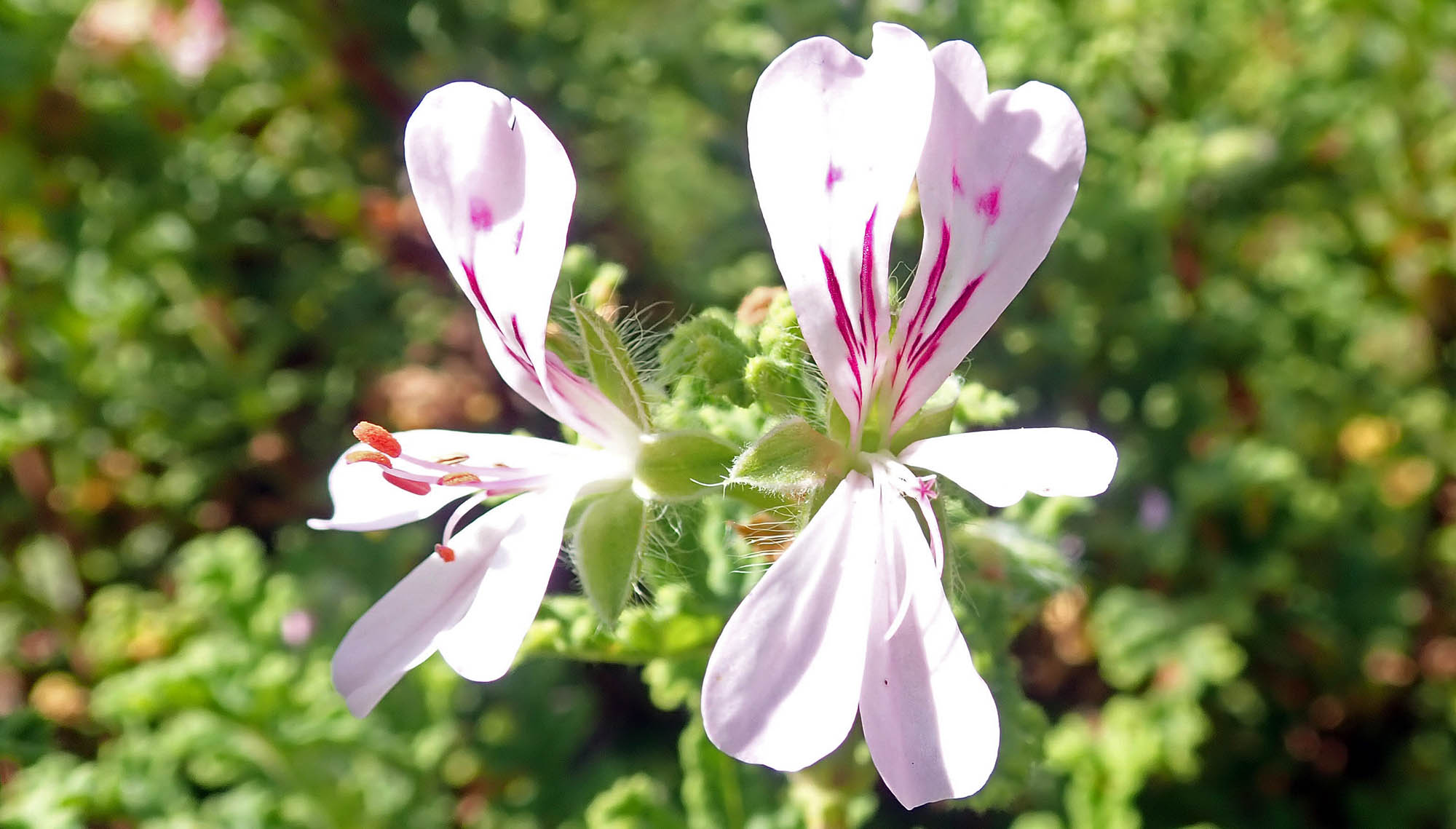 There are 33 species in this genus. They are small shrubs, growing with a single stem. White or pink flowers are crowded at the end of the stem. All of the species are restricted to the Fynbos of southern South Africa. There are 140 species in this genus. They are all small shrubs or prostate. Most species have aromatic leaves. They are all found in southern South Africa. 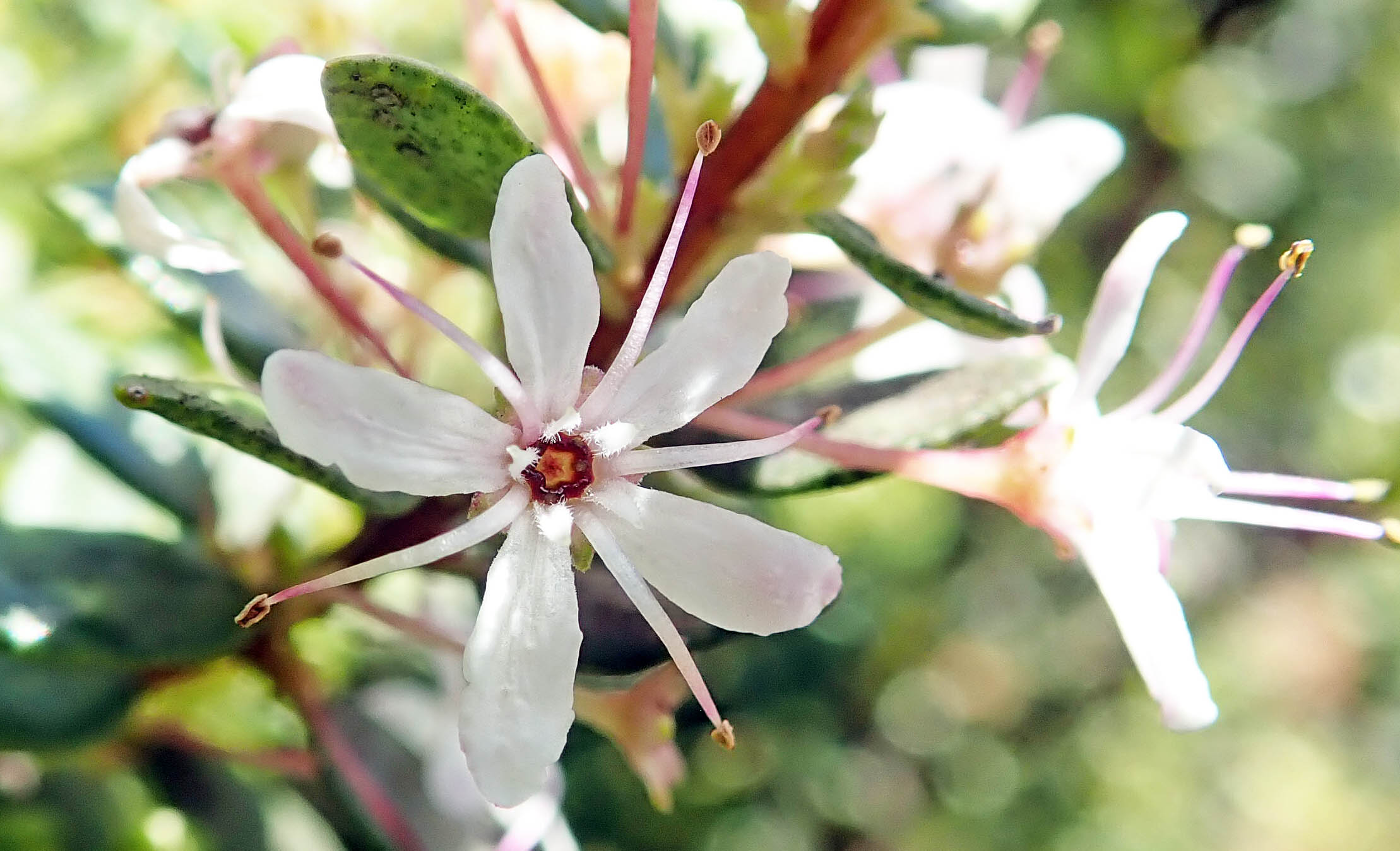 There are over 135 genera and 1800 species in this family. Surprisingly, the is is the second biggest family of plants in southern Africa, with some 95% of the species being endemic to the region. However, there are more species in the arid Karoo than the temperate Fynbos. They are often known as 'Ice Plants', 'Carpet Weeds' or 'Vygies'. The glistening of the leaves provides the first common name. They are mostly small prostate plants with the more familiar species having bright daisy-like flowers, often pink.

One of the biggest families of plants in southern Africa. 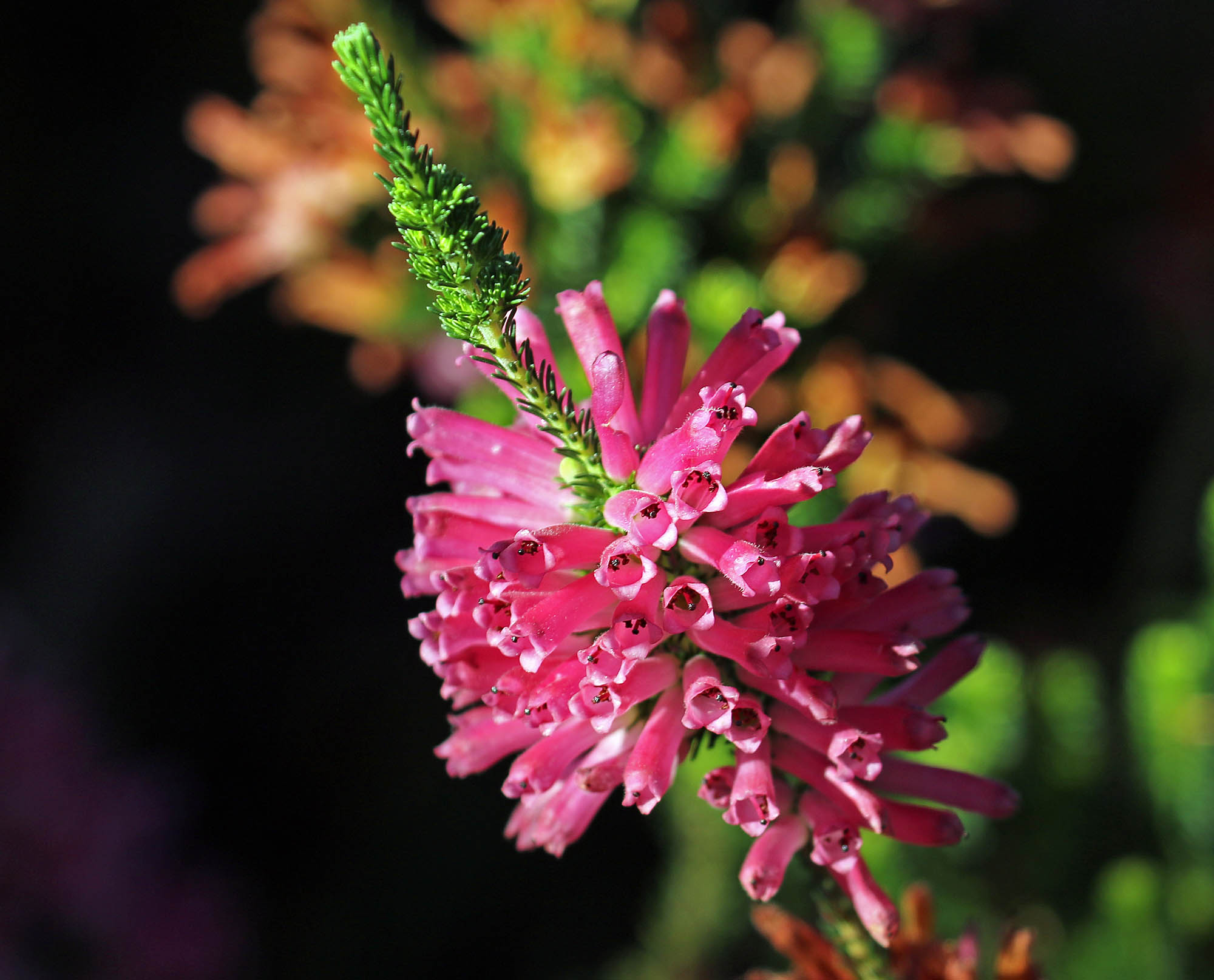 Erica verticillata. Was endemic to sandy fynbos around Cape Town, but now thought to be extinct in the wild.  Survives in gardens.