The rainforests of the tropical Americas have an incredible diversity of invertebrates. Don't come here if you are not fascinated by creepy-crawlies! 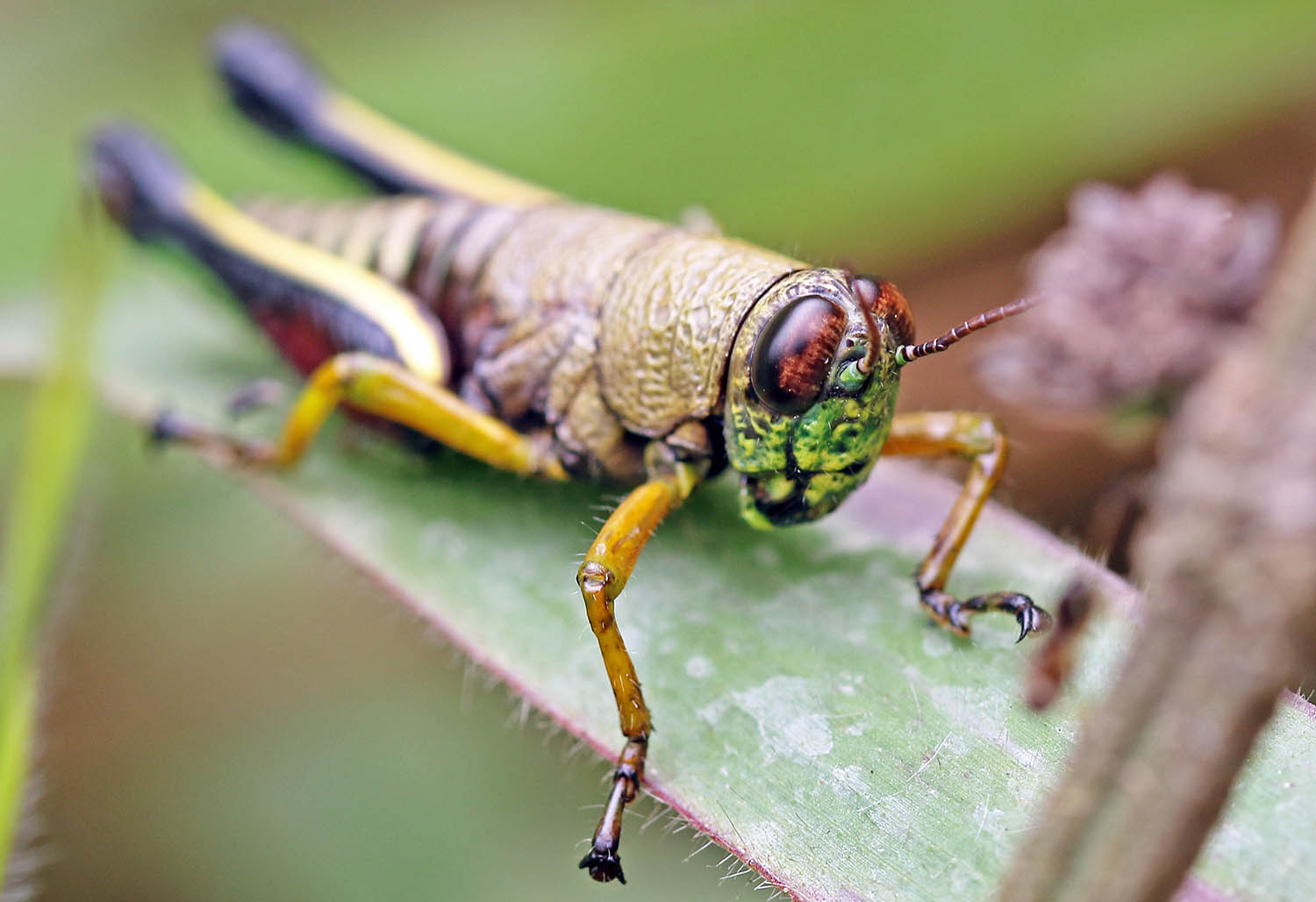 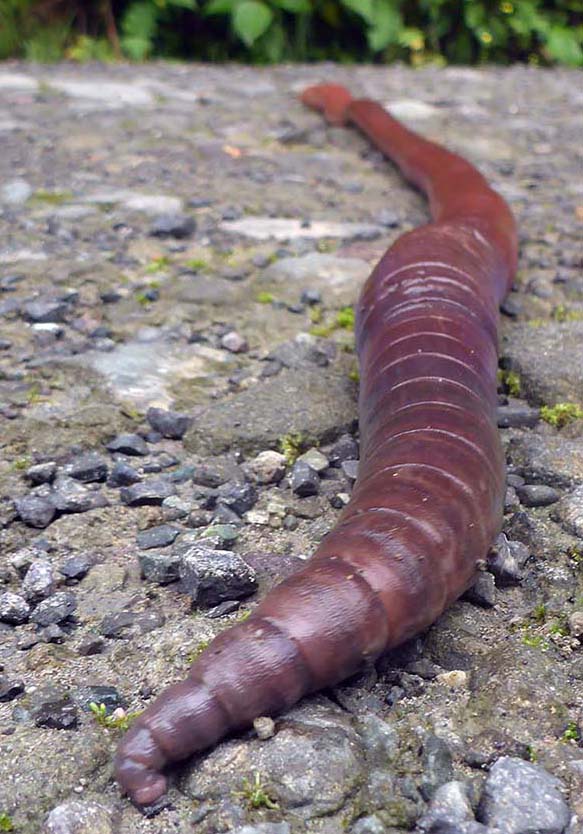 Martiodrilus crassus (?), 'Giant Earthworm'.  Up to 1.5 metres long. Like many worms, they come out onto the soil surface when conditions are wet. 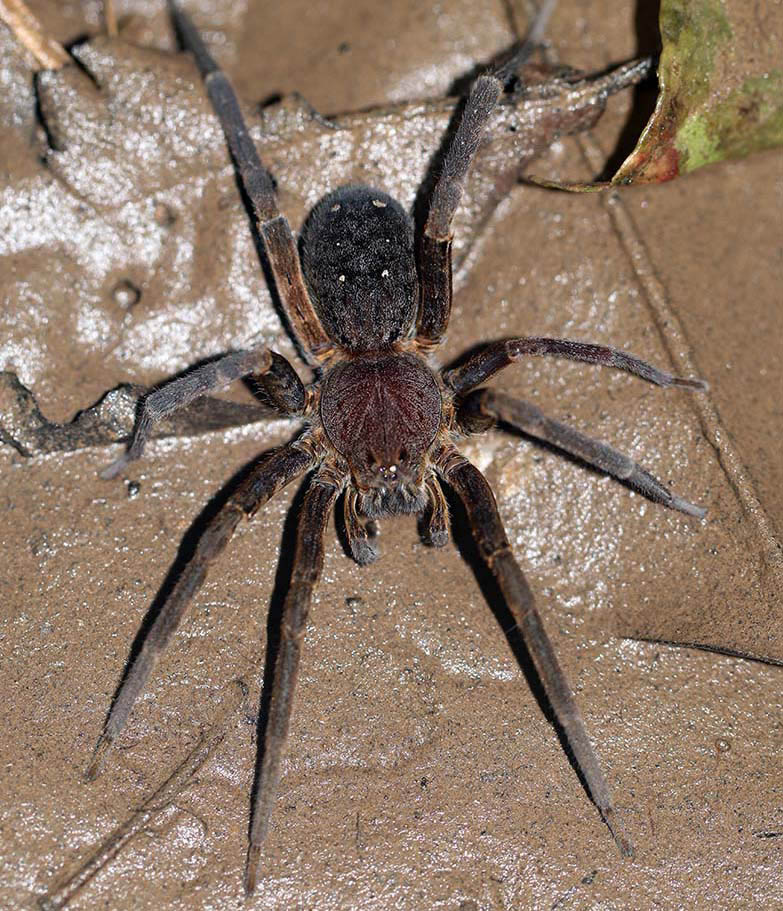 Distinguished from spiders by having a much more rounded ball-like body, with no constriction or 'waist' between body parts. In contrast to spiders, they have one pair of eyes, rather than eight eyes. They usually have very long thin legs. 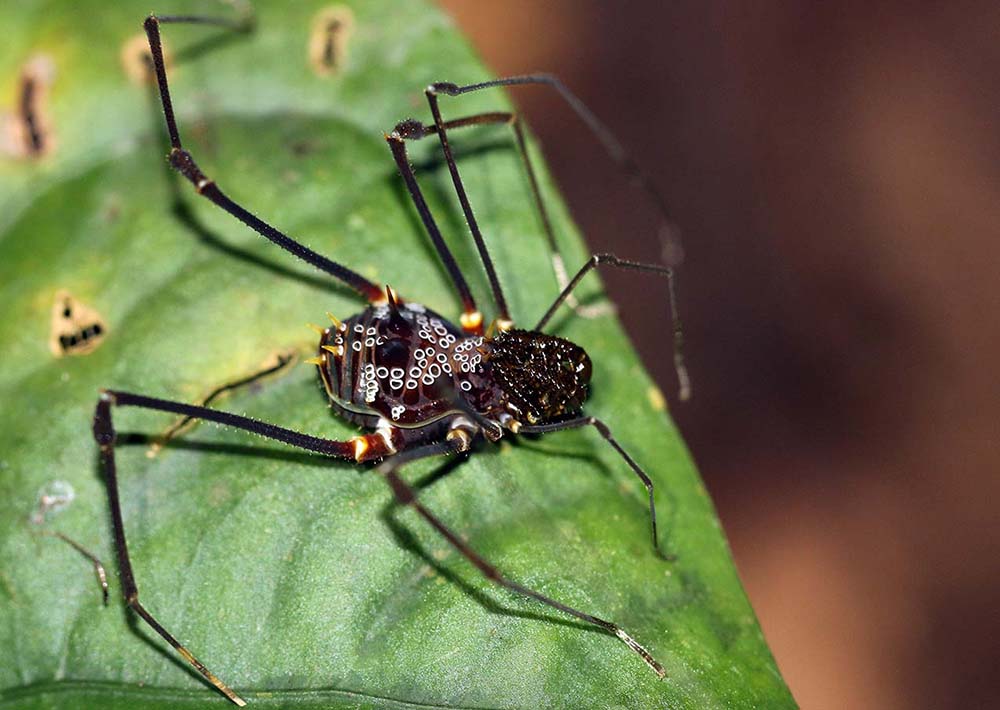 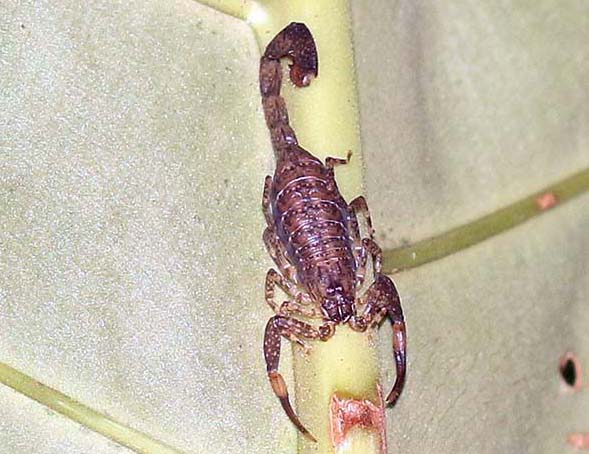 There are over 1000 species in this family. The are found throughout the tropics of the world, but seem most obvious, species rich and BIG in the neotropics. While there are tiny species, they are best known due to the large size and weight of many species. This size is reflected in their diet, with some species of tarantula being recorded to kill and eat reptiles, mice, bats and birds. They are not known to be deadly to humans, however, their bites can be painful. 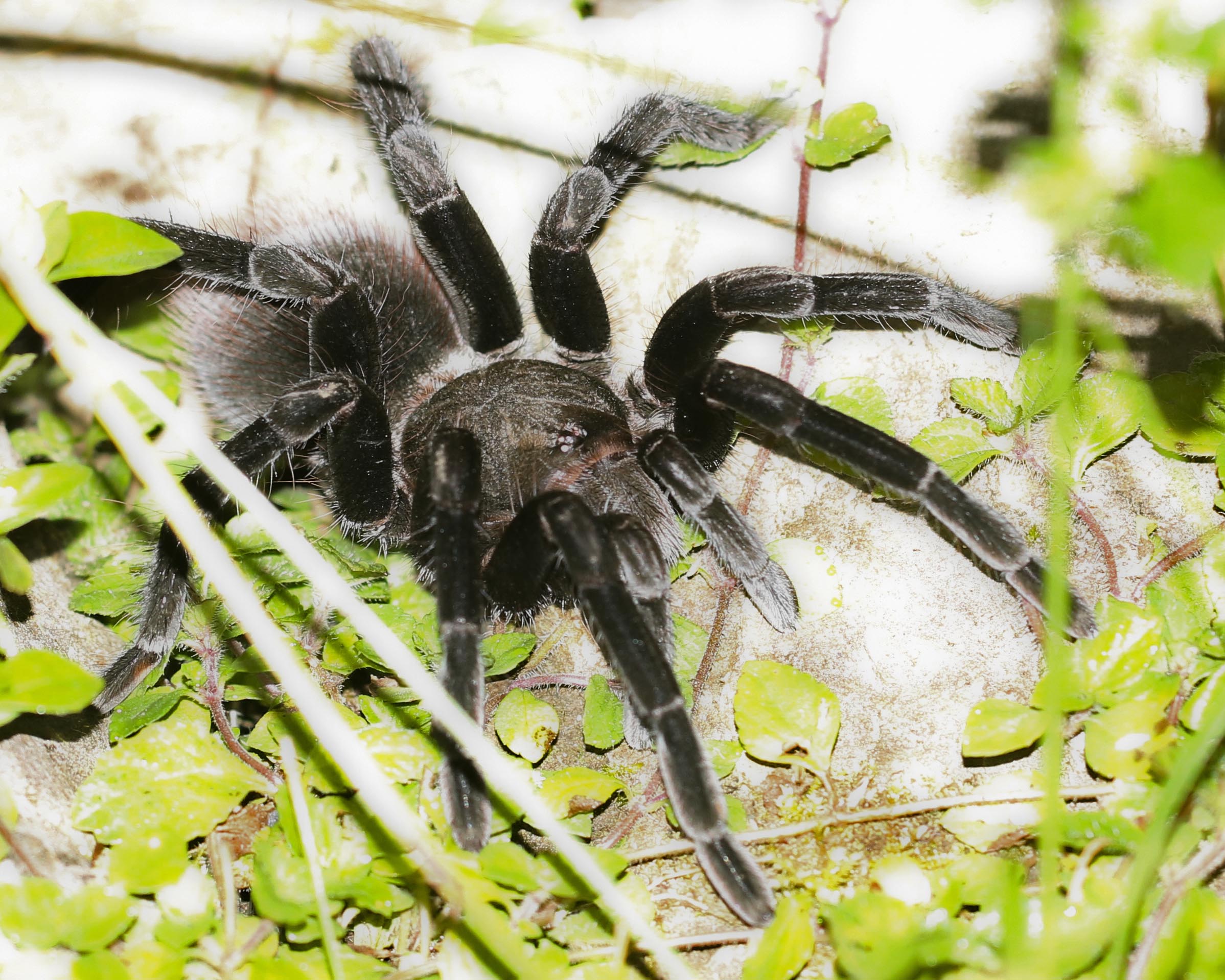 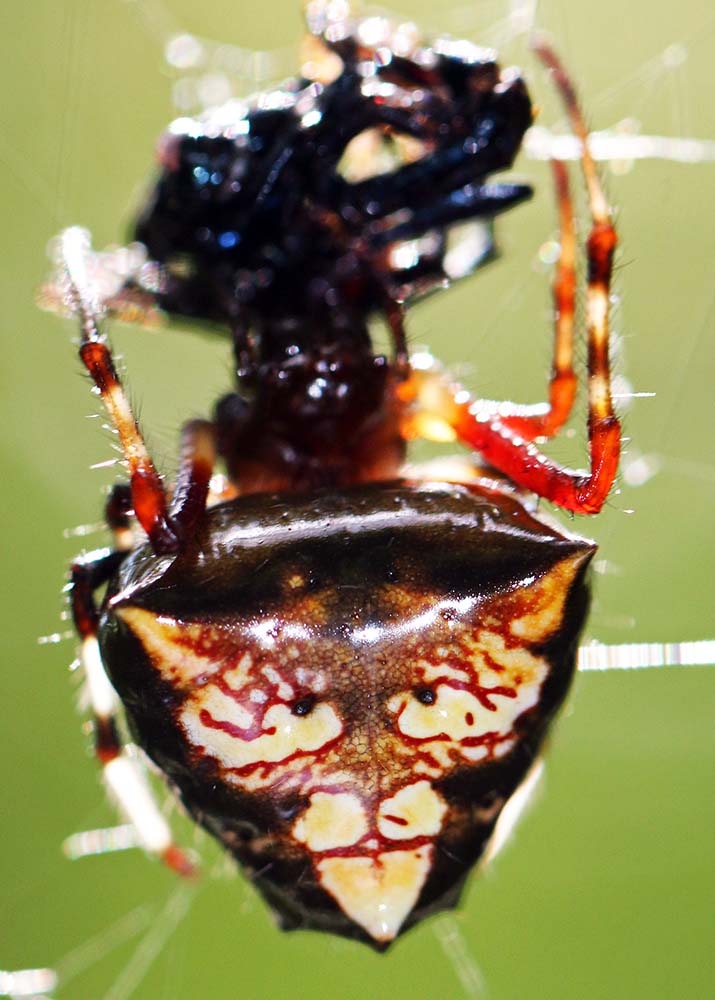 Spiny-back Spiders are small but stunning spiders decorated with bright colours and spines. 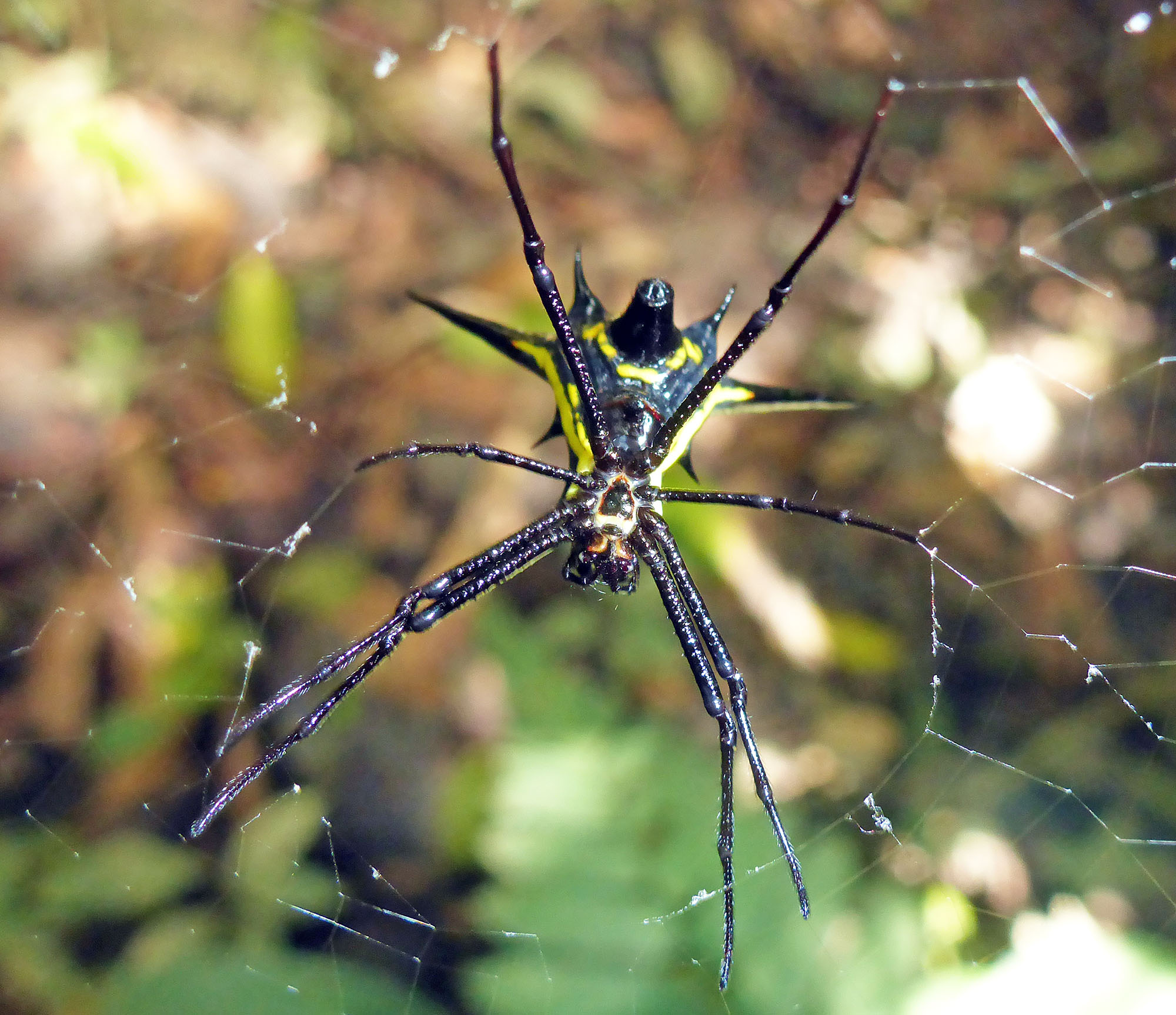 Micrathena contains some 119 species. They are found in Neotropical woodlands and rainforests. 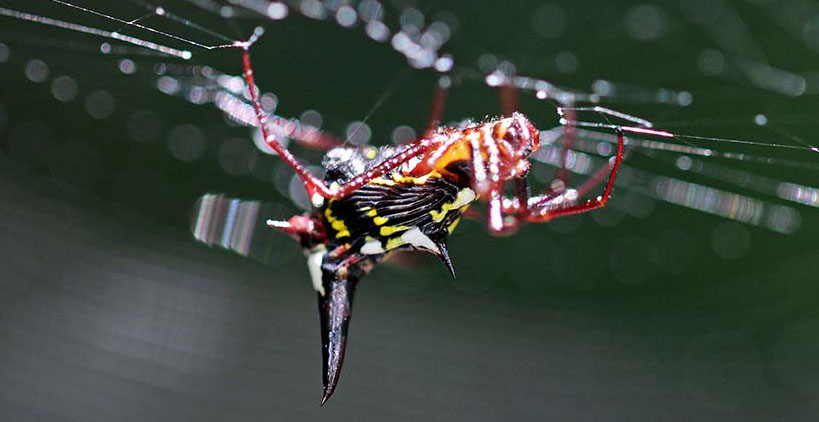 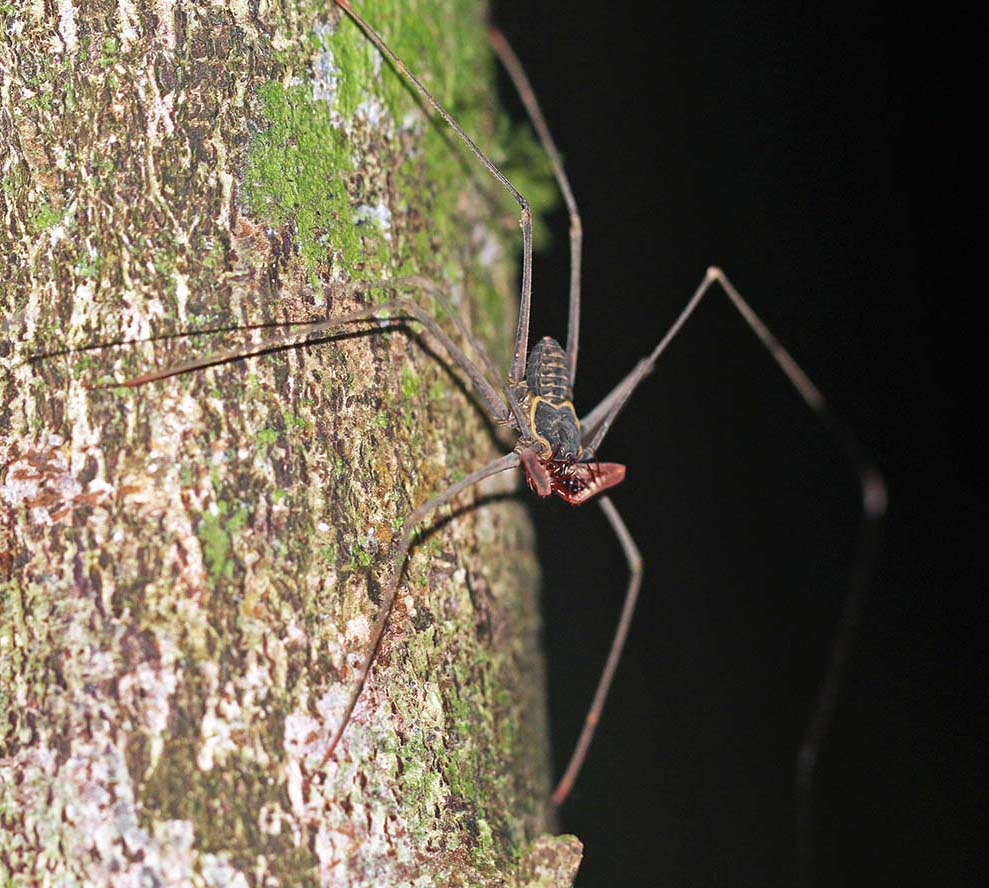 Centipedes and millipedes are long with many legs. The main difference between the two groups is that centipedes appear to have one leg per segment (on either side), while millipedes appear to have two. Centipedes are usually fast movers, and often predate on other invertebrates, while millipedes are generally slower, and feed on decaying vegetation. The former can have painful bites, while the latter have chemical defences. Millipedes tend to roll into a defensive ball when touched; centipedes shouldn't be approached, closely touched, or insulted! 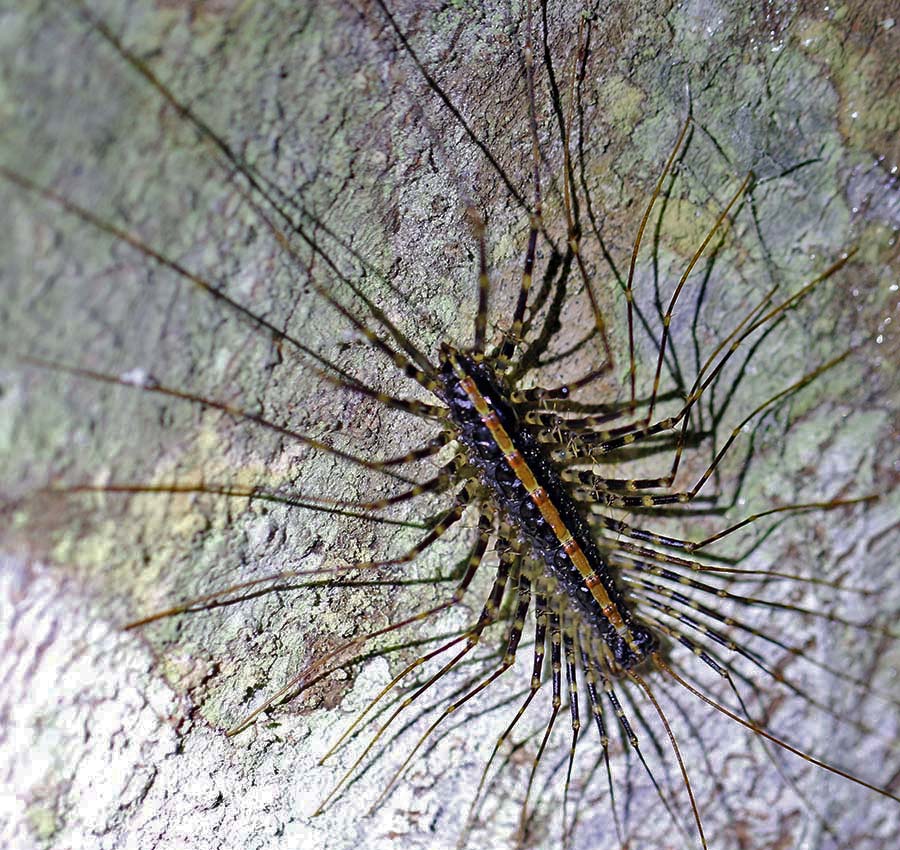 The Scutigerid centipedes are startling to us humans, scuttling along very quickly with their long legs. They often live in caves, and thus are pre-adapted to living in houses with humans, as well as drains and pipes.

This is is the largest order of millipedes, with over 3,5000 species.

These millipedes are called 'flat-backs' because they often have 'wings' that extend out from each body section. This group also includes all the millipedes that are known to exude hydrogen cyanide as a defence. To warn predators of this defence, these millipedes are often more colourful reds and oranges. These brighter colours combined with keeled shape, mean some people mistake them for centipedes.

The rainforests of the tropical Americas have the highest diversity of insects in the world. It has been reported that you will find more species of ants on a single tree in a Neotropical rainforest than occur across the entire country of England. 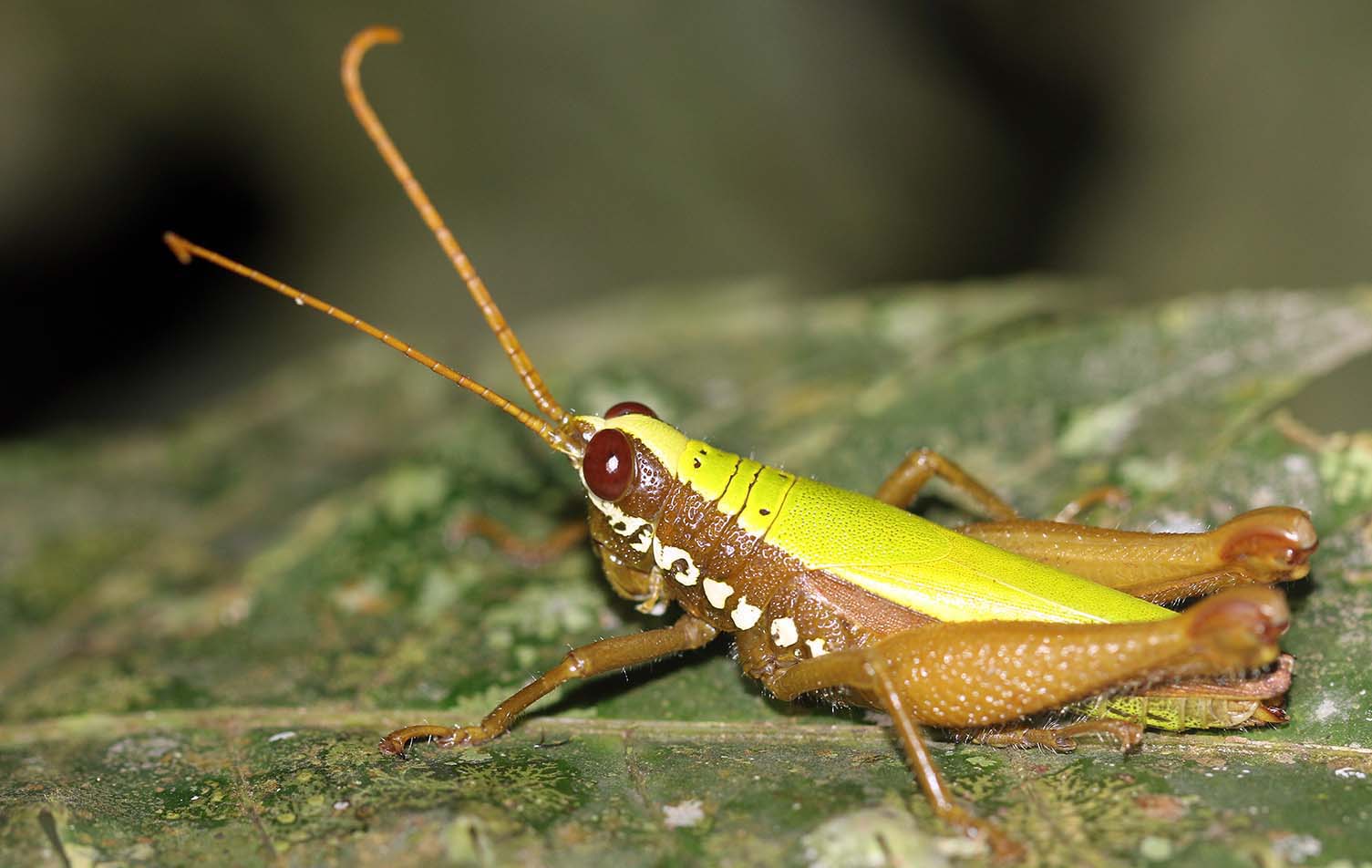 The insects of this order are well known for their quick springing and jumping abilities, a skill possible due to the incredibly long legs that are bent back and to the side of the body. These legs are also involved in sound production; they are rubbed to create the sometimes very loud noises that males make to attract females. 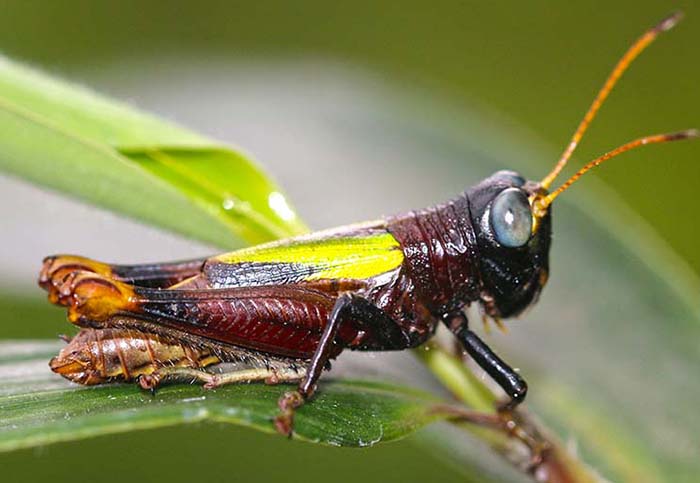 Like many common names cricket and grasshopper mean different things in different places. Generally, the crickets tend to be nocturnal, have long antennae and females have an extension to the back of their body which is stuck into soil to lay eggs (ovipositor). In contrast, grasshoppers tend to be diurnal, have short antennae and females lack the ovipositor. Generally, the nocturnal crickets are duller coloured, while the diurnal grasshoppers can be brighter colours; however, in the tropical rainforest crickets are often colourful bright greens. Katydids are also known as ‘long-horned grasshoppers’, but are classified with the crickets. They are common in tropical rainforests worldwide, but because they are often high in the canopy, and many species are green and frequently shaped like the leaves and stems in amongst which they live, they can be hard to detect. Only their loud calls give away their presence.

A family of grasshoppers found only in the Americas. 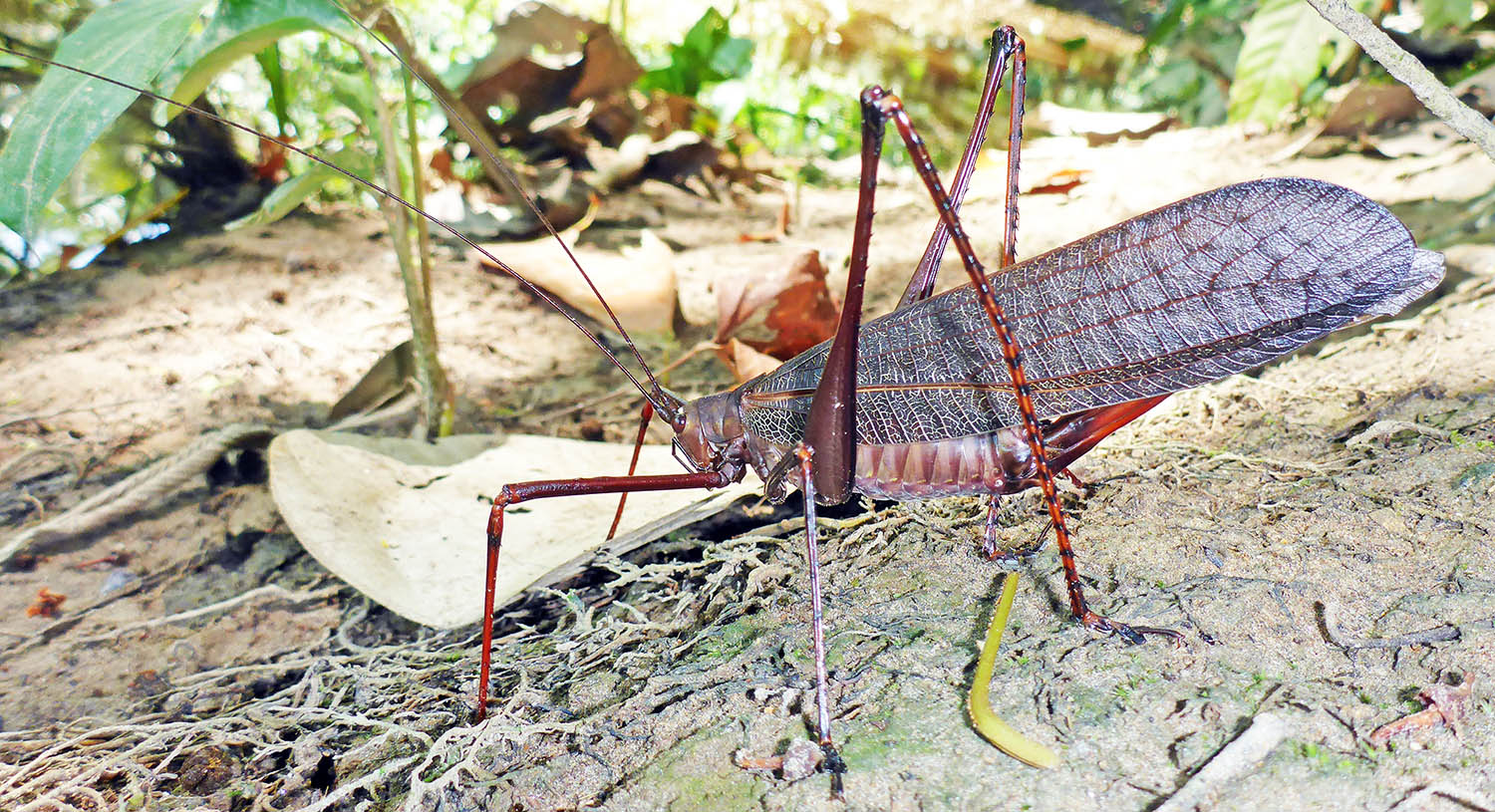 Tropidacris cristata, 'Red-winged Grasshoppers'. Three sub-species. At over 15cm long, they are one of the biggest insects in the world, and probably the largest of all grasshoppers. They usually have a dull reddish body, and bright red wings when opened up in flight. Their large size means people sometimes mistake them for birds when they have seen them flying in the canopy. They have spines on their back legs, and they have also been reported to given a painful bite, and using a bitter brown liquid as a defence. Found in rainforest of Central and South America.

The second largest family of true bugs. These insects suck sap from plants.

While processing tree sap for nutrients, they squirt the water forcibly out the rear. Their back legs are covered in fine spines that assist in the spreading of a secretion over themselves that works as a water repellent and carrier of pheromones. 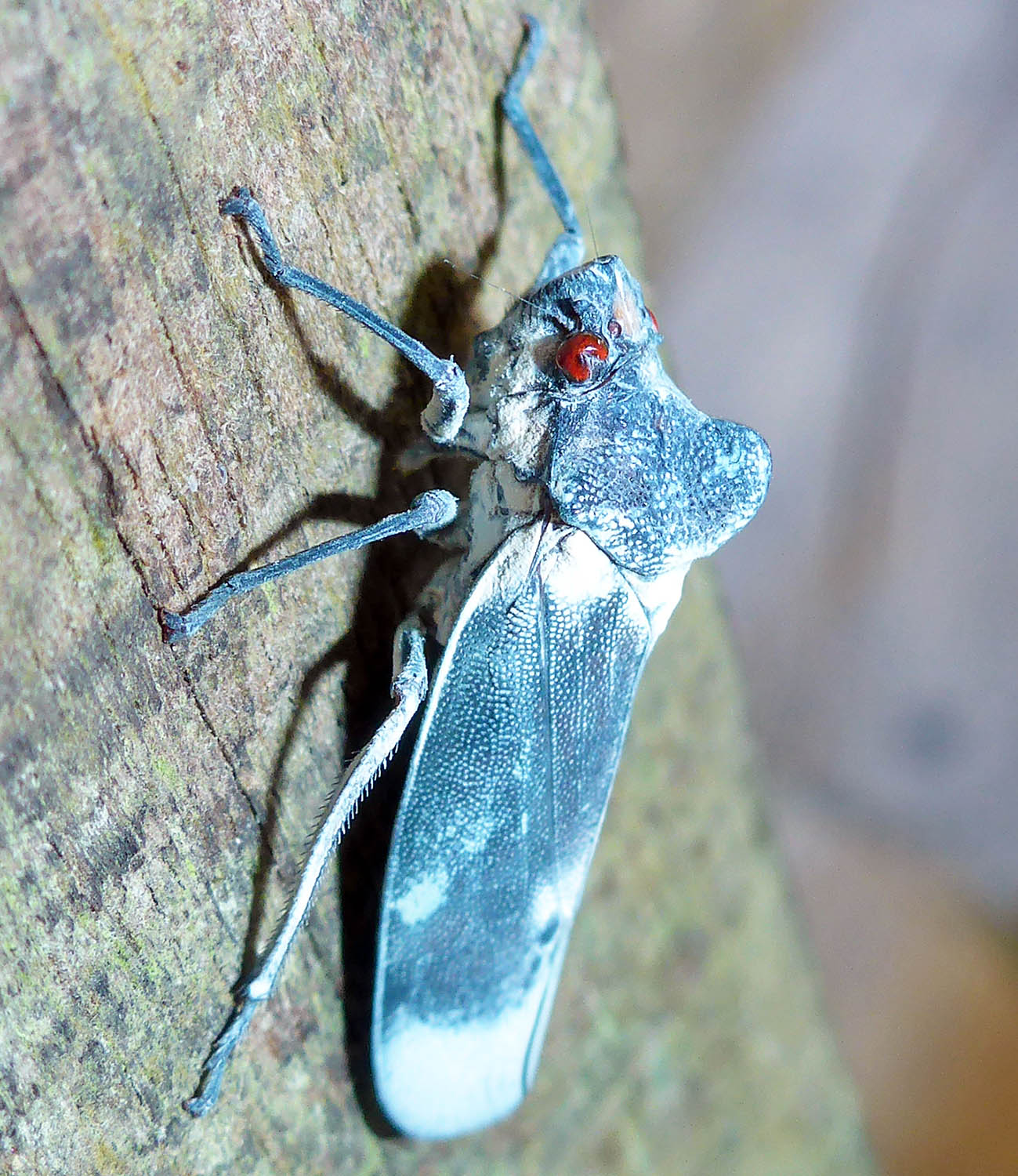 This family includes over 8000 recorded species so far, and are found all over the world. They are particularly diverse in South America. 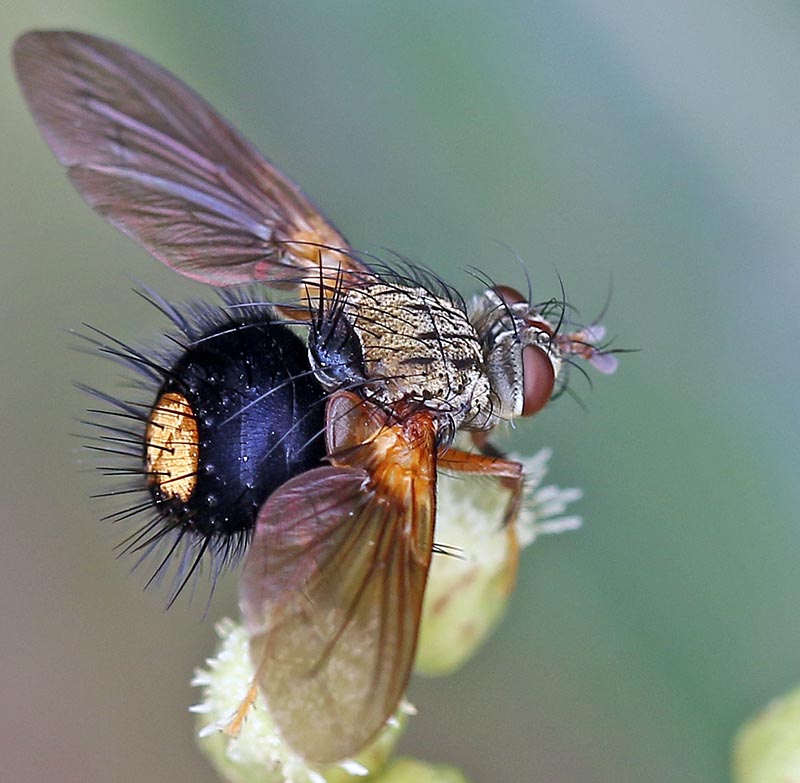 'Hedgehog Fly'. This group is most obvious and diverse in South America, particularly in high altitude rainforest where they may be important pollinators of flowers. The larvae are internal parasites in other insects.

Beetles are similar to the true bugs in their rounded appearance and their hard protective forewings that fold over the softer hindwings. However, they differ in the fact that the wings usually meet straight in the middle (to form the protective elytra) and they have efficient biting rather than sucking parts. The elytra is often shiny and produces some beautiful colours and textures. This harder layer is lifted up when the hind wings are used for flight. The high number of species of beetles is famous amongst biologists, and they are usually considered the most diverse of all animal groups. 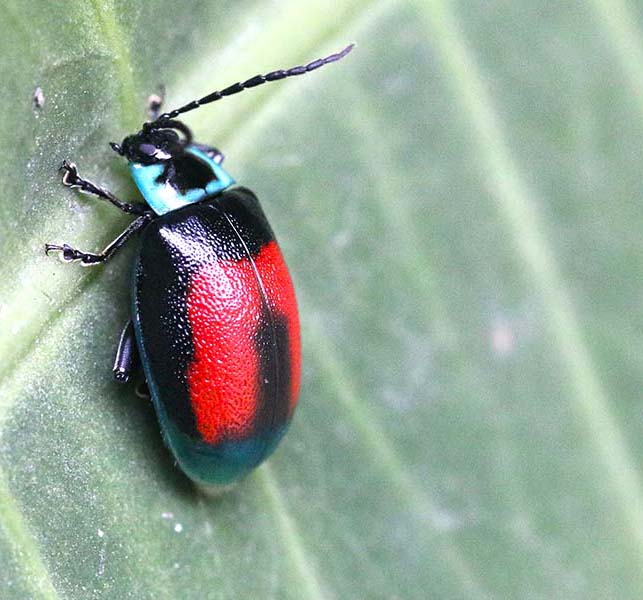 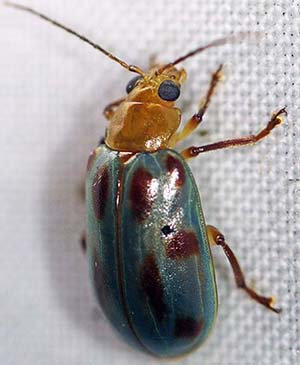 There are estimated to be some 1000 species of ants in the Amazon region.

If you see a line of leaves walking up a tree, you are witnessing 'Leaf-cutter Ants' at work.

Stingless bees are found throughout the tropical forests of the world. They don't need to sting as they don't need to defend an external nest as do stinging bees; their colonies are protected by being inside trees or rock gaps, and are only accessed through a narrow resinous tube of an entrance. They may not sting, but they sometimes bite. Some species are known as 'sweat bees' as they may drink the sweat off human skin (there are some other bees that also do this and are similarly named).

A stingless bee on the arm of the author  (Amazonia Lodge, Peru).