The diverse plants and beautiful flowers of the Australian temperate forests... 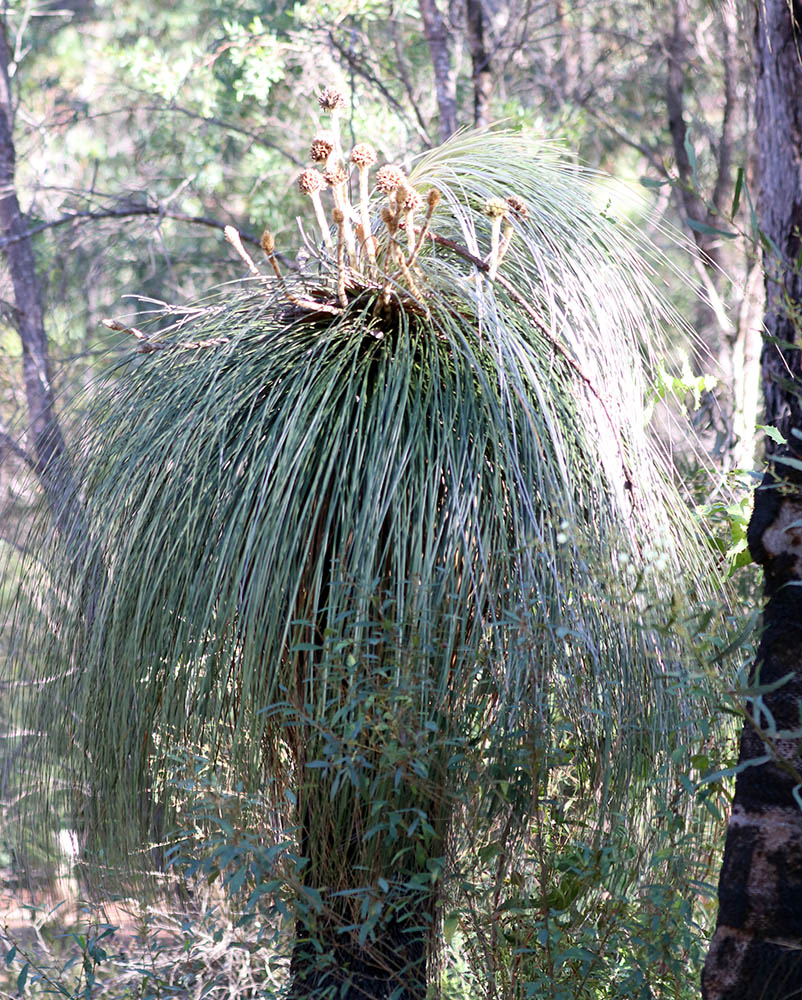 There is only species in this genus. They strongly resemble 'Grass Trees' Xanthorrhoea and often grow in the same habitat, however, they are not closely related. Instead of flowers on a single long stalk, they are produced on many shorter 'drumsticks', thus the common name. 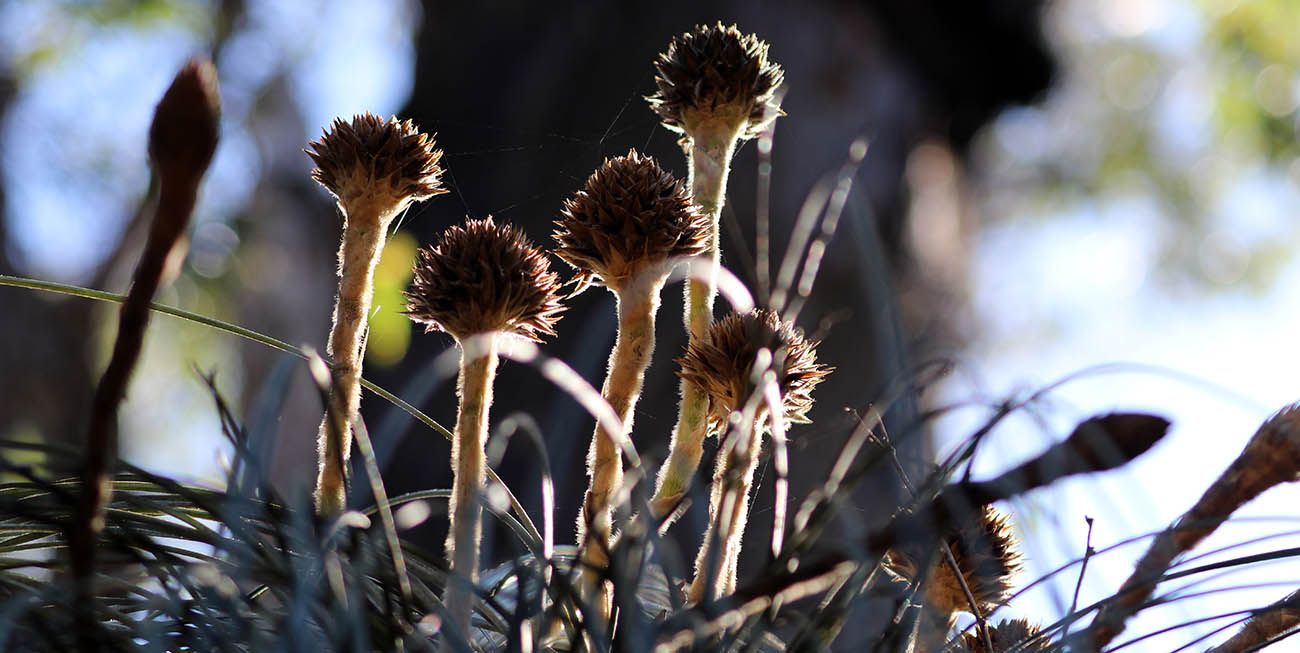 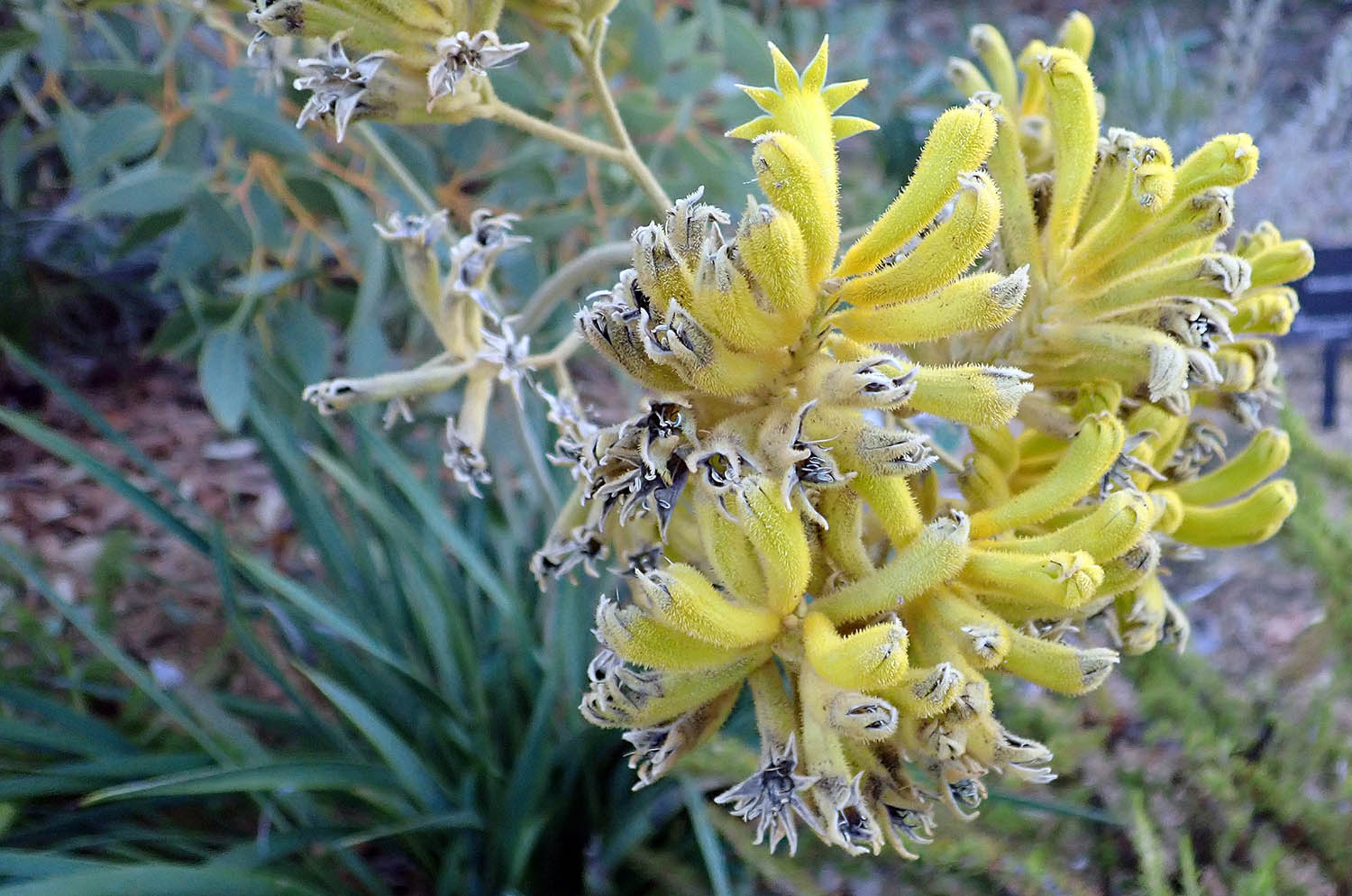 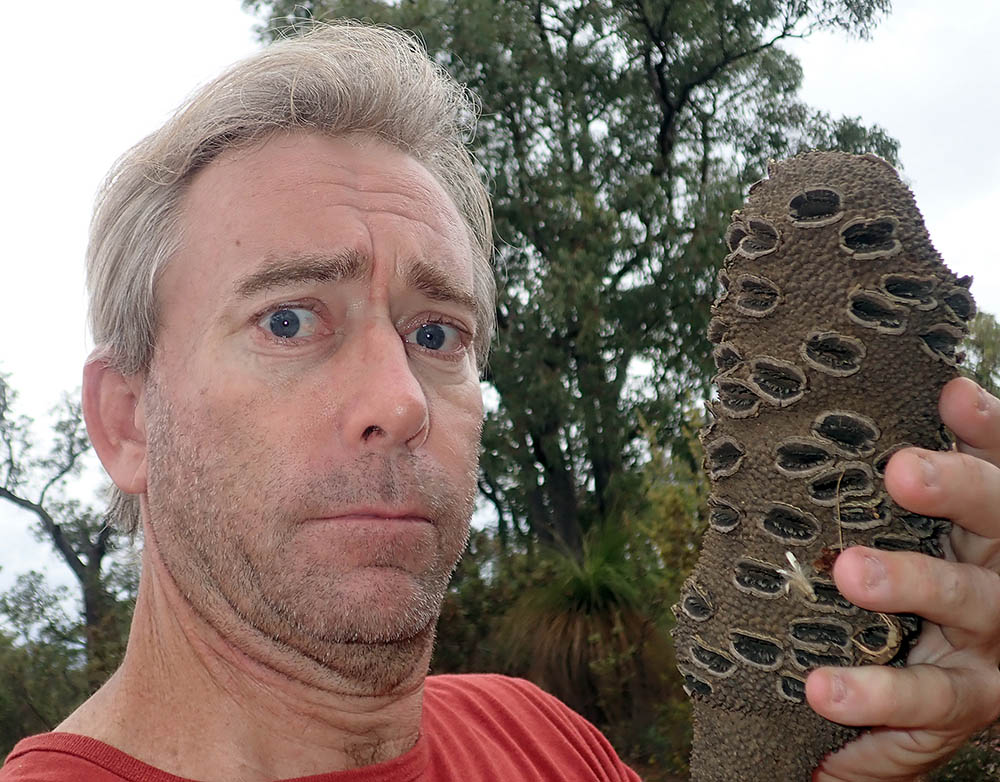 The biggest banksia cone (Banksia grandis) is as tall as a human head! 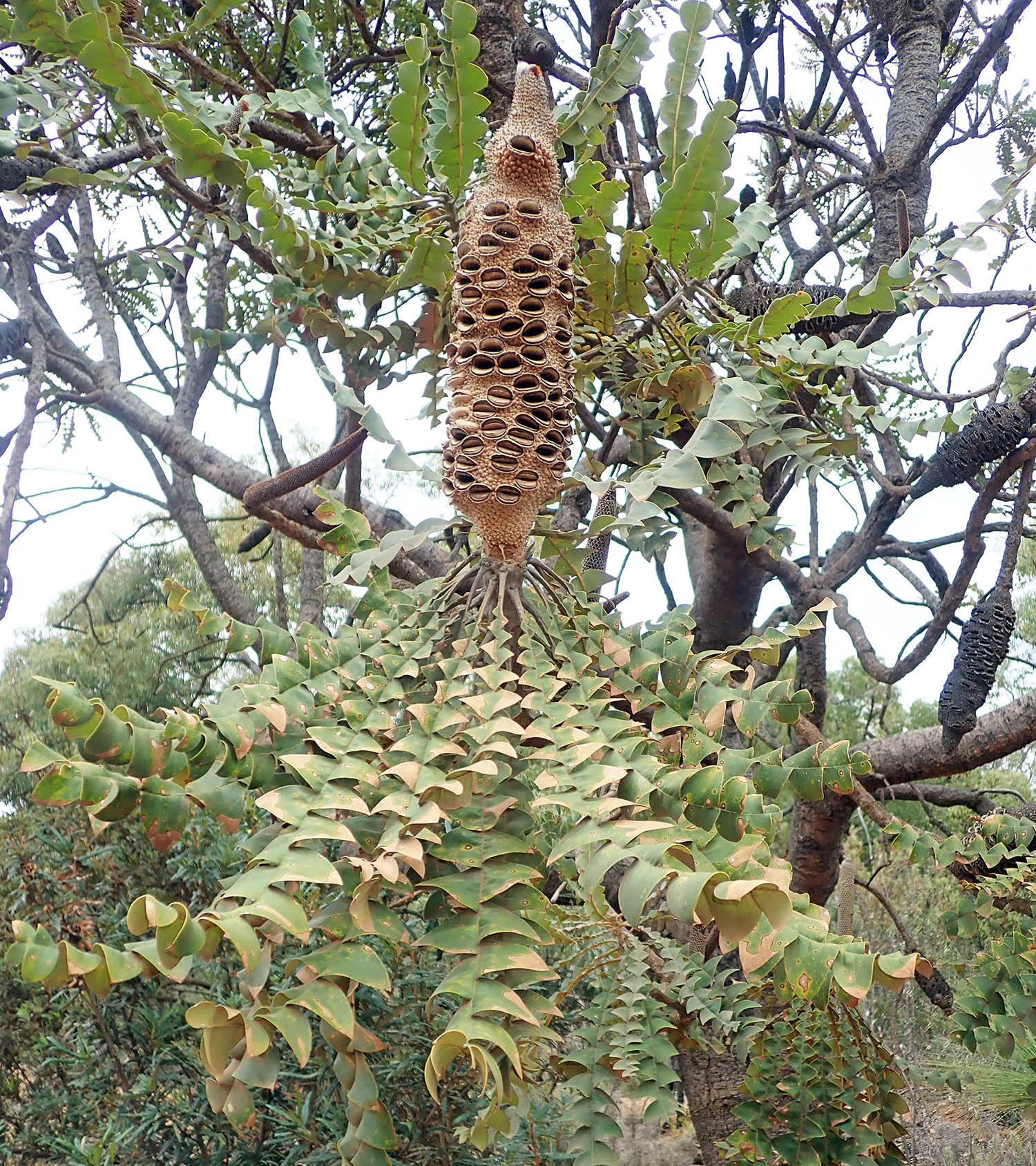 Banksia grandis, 'Bull Banksia'. It often grows as just a shrub, but sometimes becomes a large tree. Can be found in heath and woodland, only in south-west Australia. 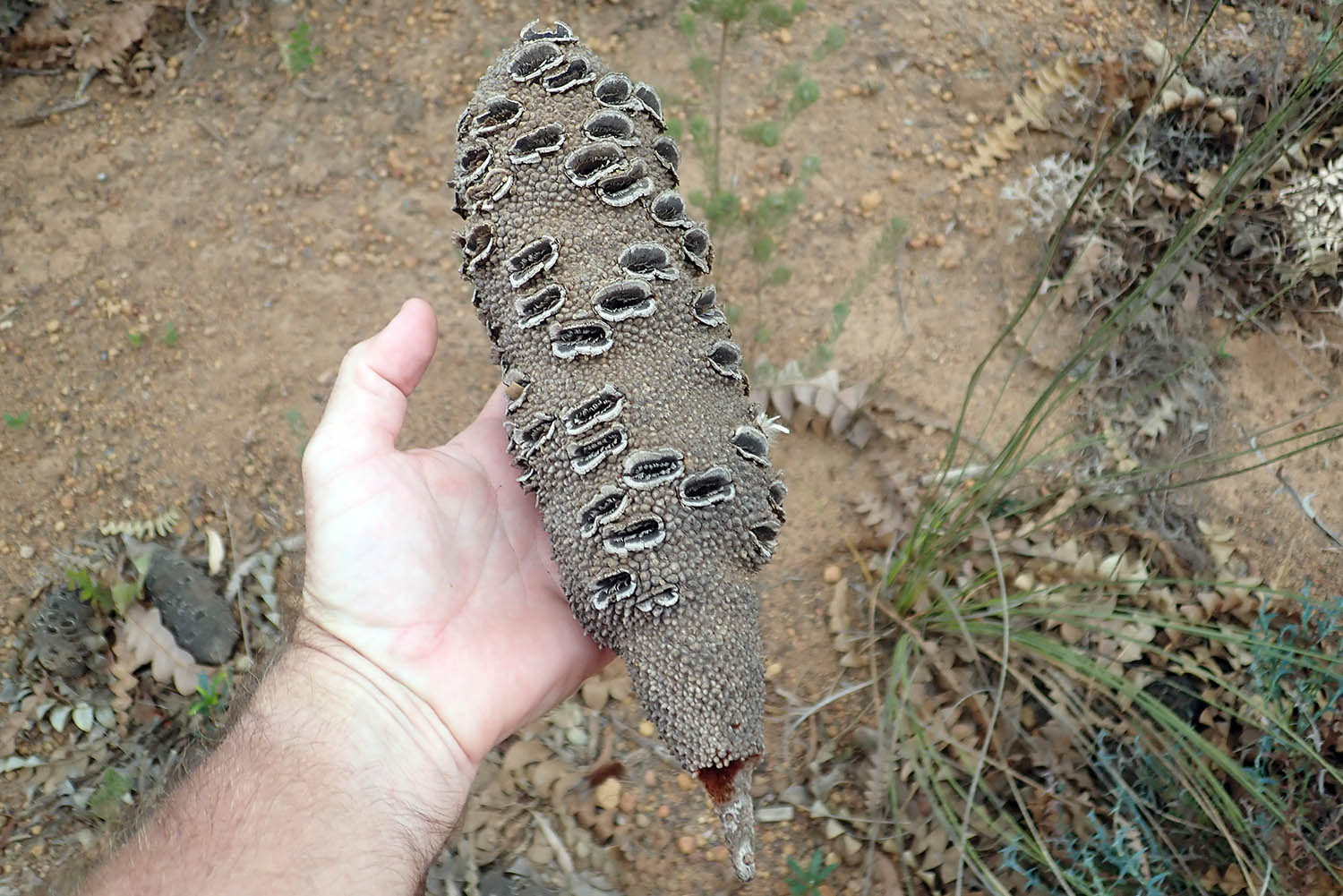 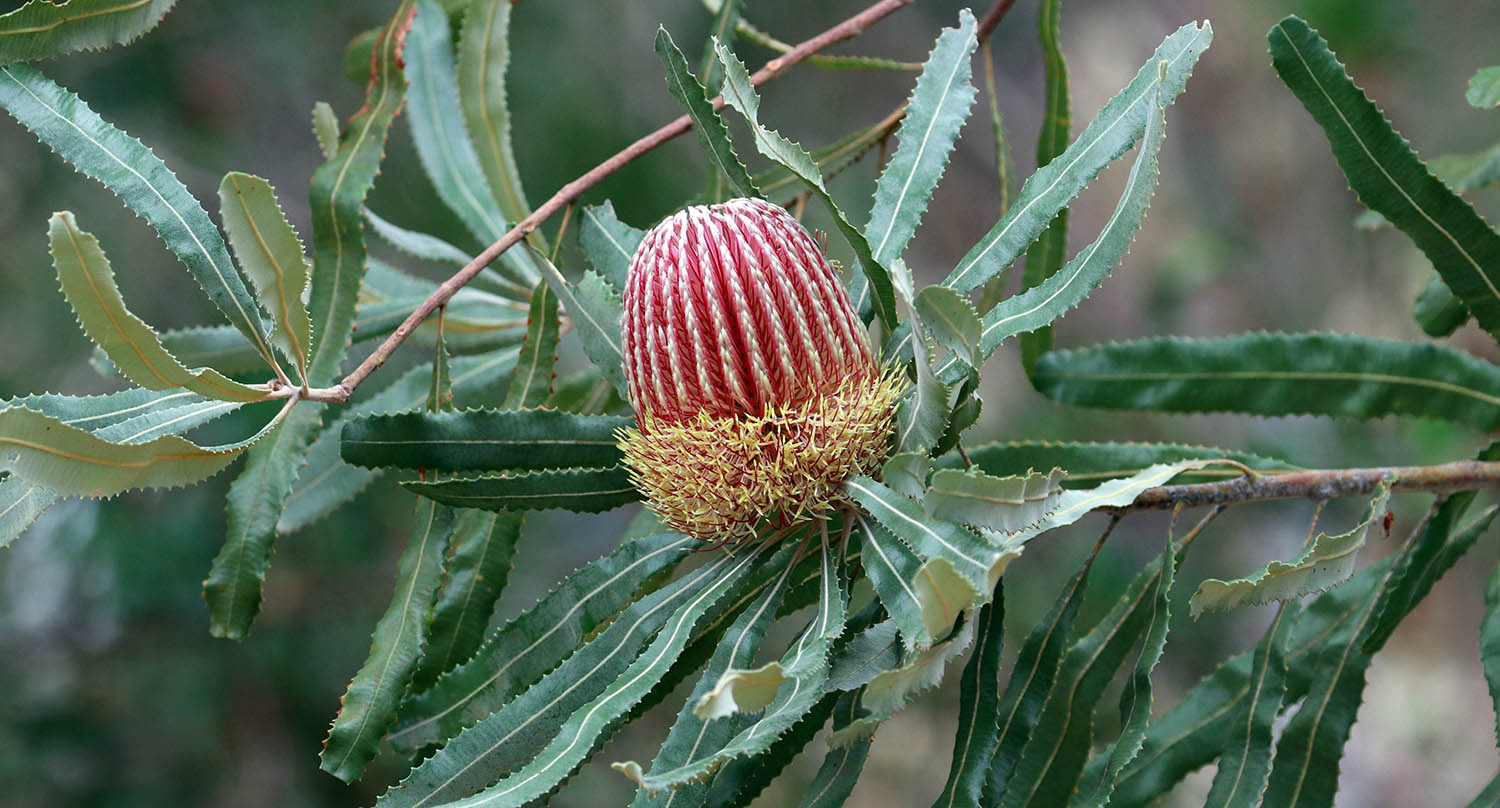 Banksia menziesii, 'Firewood Banksia'. Grows as a tree or shrub. Flowering occurs in winter and the inflorescence is striking and varied; they often appear fluffy and yellow on the bottom half and with fine red stripes in the trop. Endemic to the scrub and woodlands of south-western Australia. 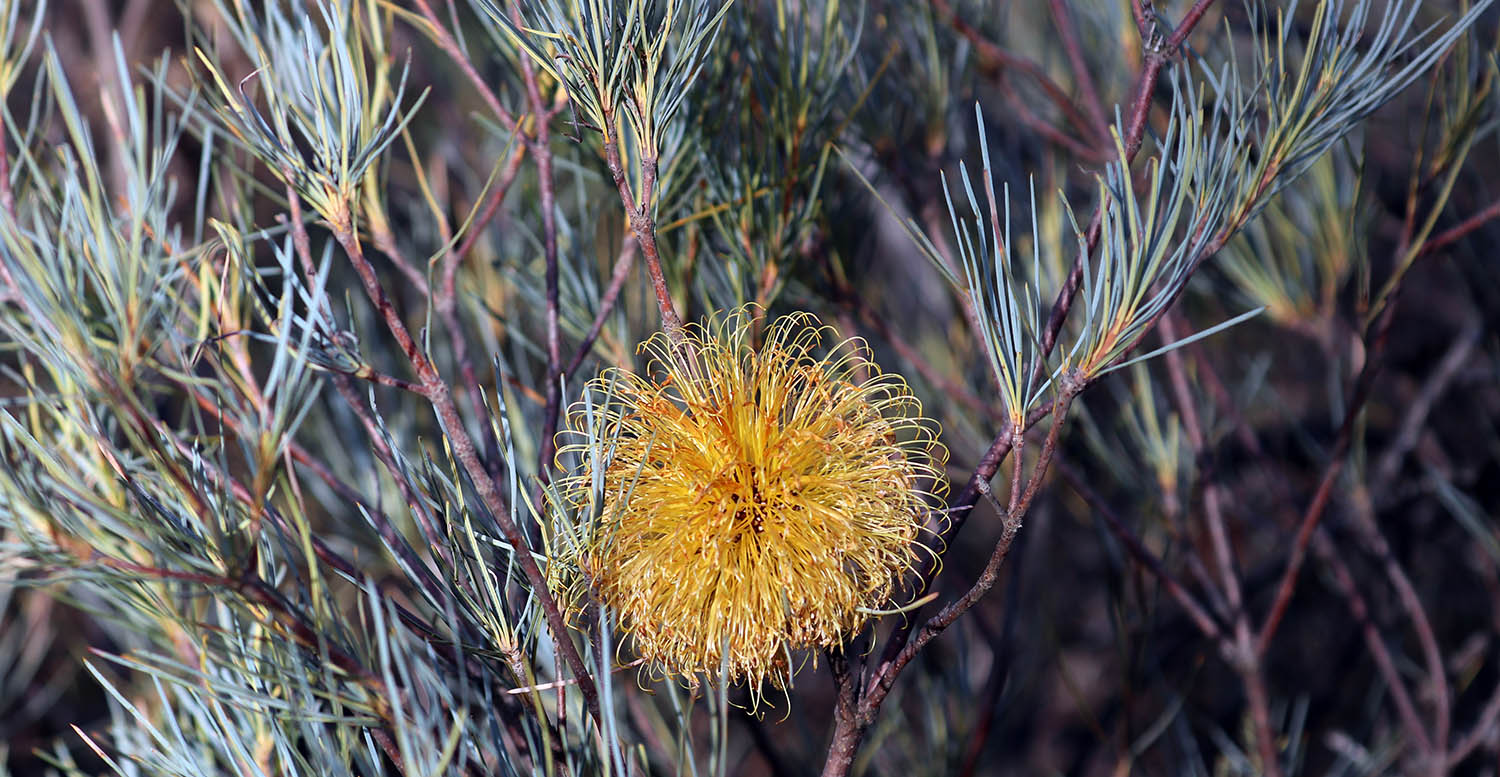 Banksia sphaerocarpa, Banksia'. Round yellow inflorescence. It is found in various habitats with as sandy soil across it's range in the south-west of Australia.

Many species in this family have yellow flowers. In temperate Australia, most species are vines or shrubs.

A genus of some 175 species. It includes trees, but is mostly shrubs and climbers. They usually have bright yellow flowers, with five petals. They are mostly found in Australia, with another two dozen species in New Caledonia, a couple in New Guinea and Fiji, and one endemic species in Madagascar. 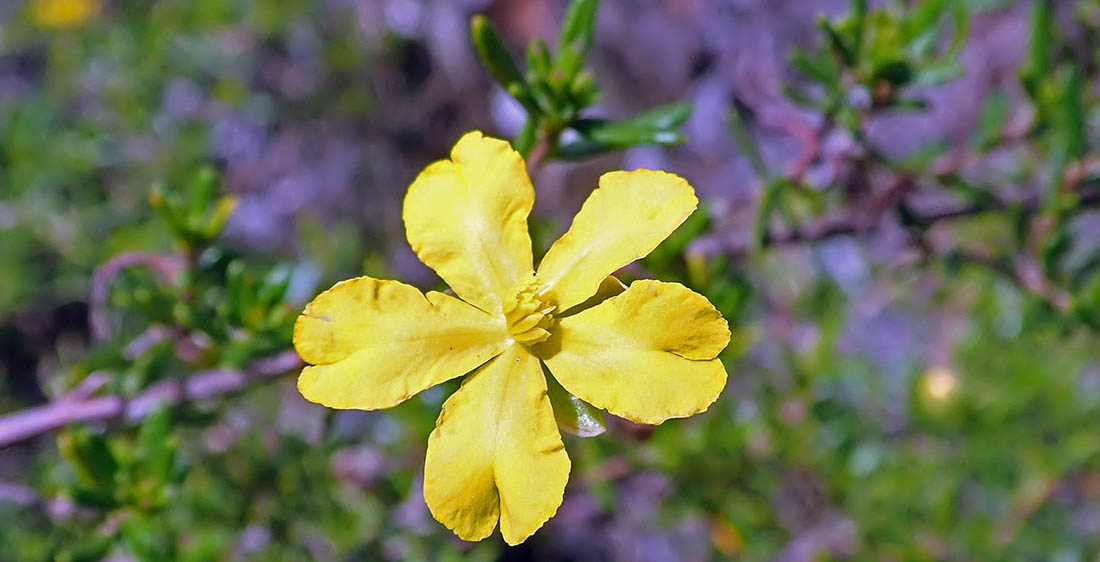 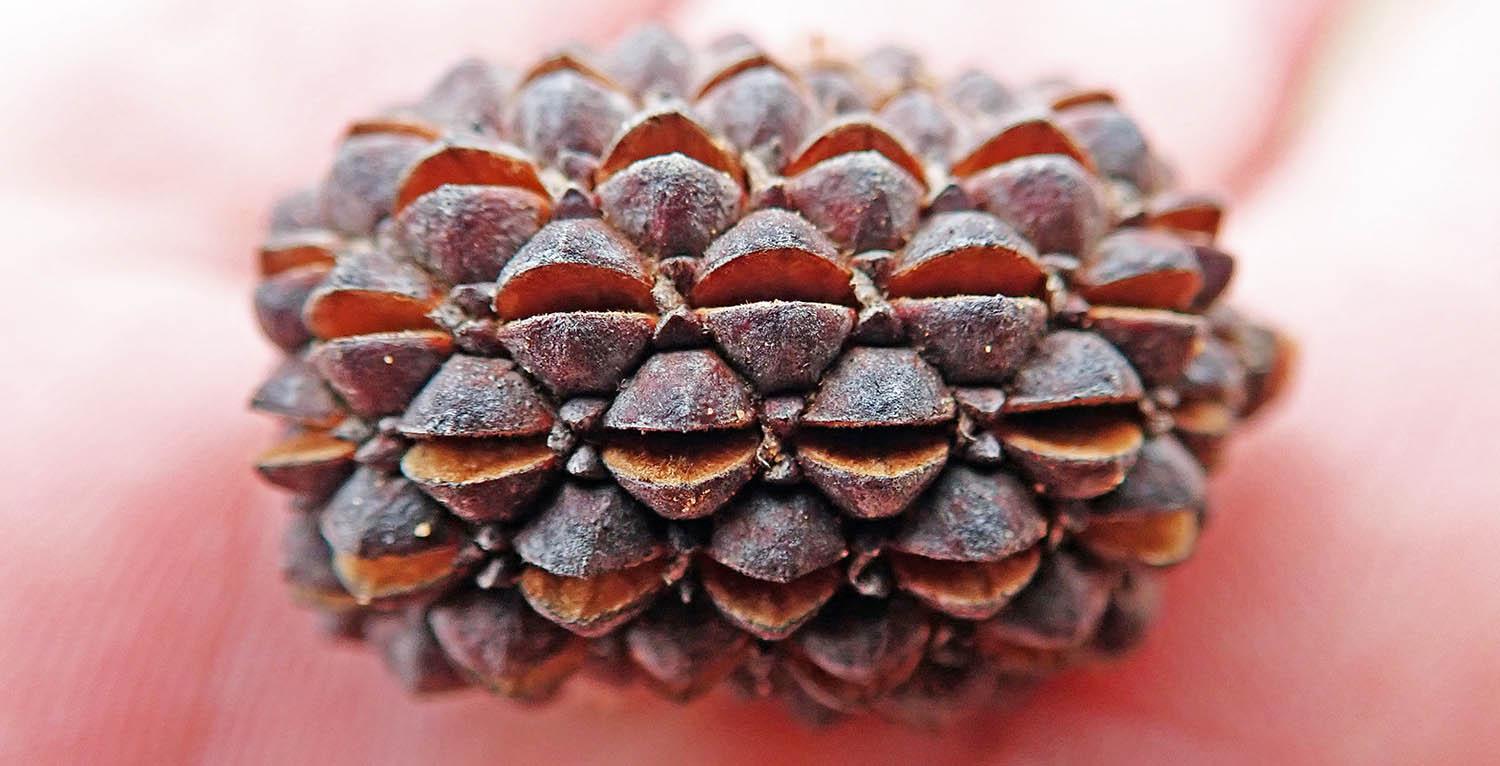 Allocasuarina fruit. The Allocasuarina genus is closely related to Casuarina. The species are endemic to Australia.

A small group of trees and shrubs endemic to south-west Australia. 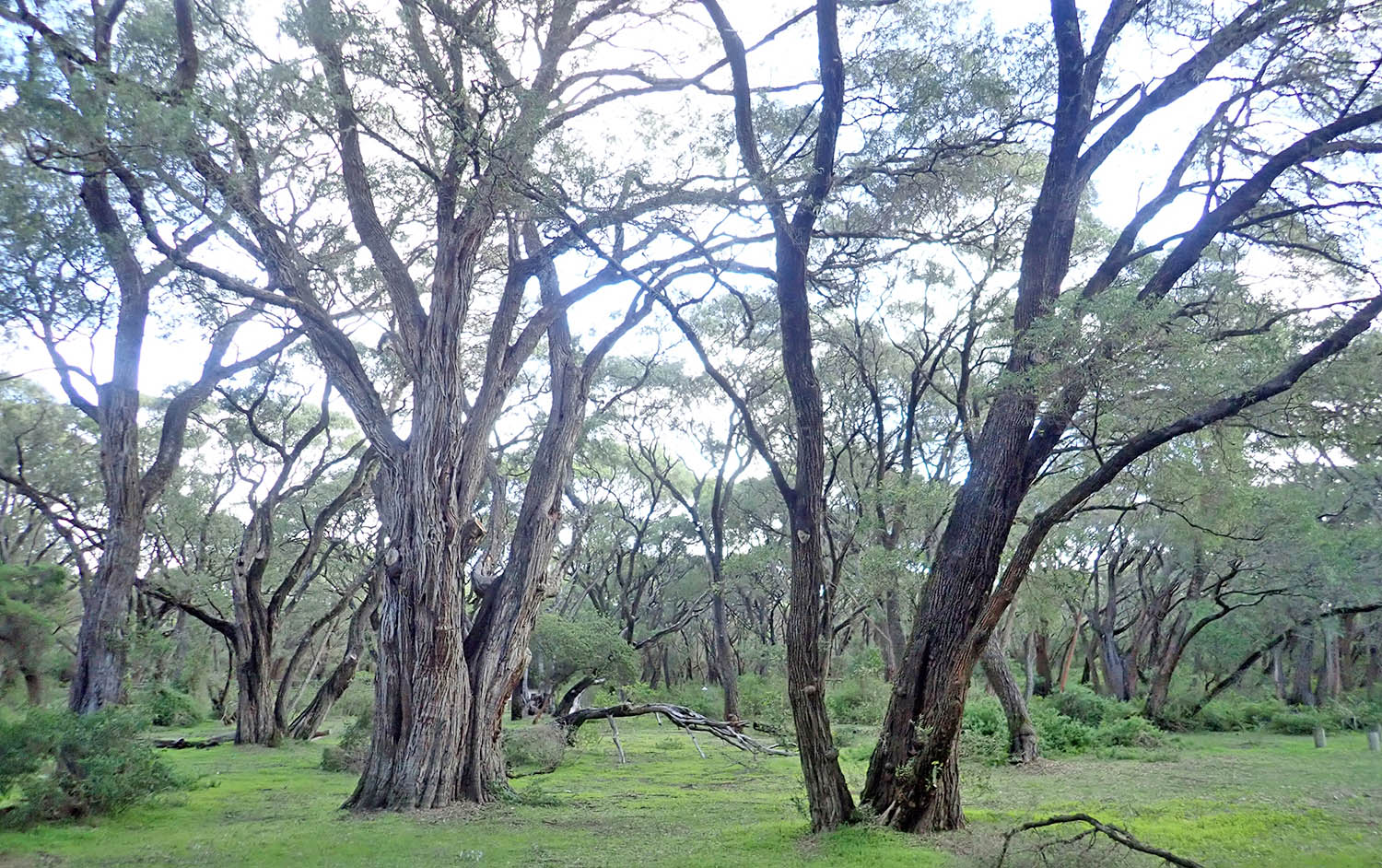 Agonic flexuosa, '(Western Australian) Peppermint' trees are short trees with have fibrous bark. They are mostly found near the coast and are endemic to south-west Australia.

Agonic flexuosa, '(Western Australian) Peppermint', have slim leaves giving them a 'weeping willow' appearance. The fruits are circular and woody. 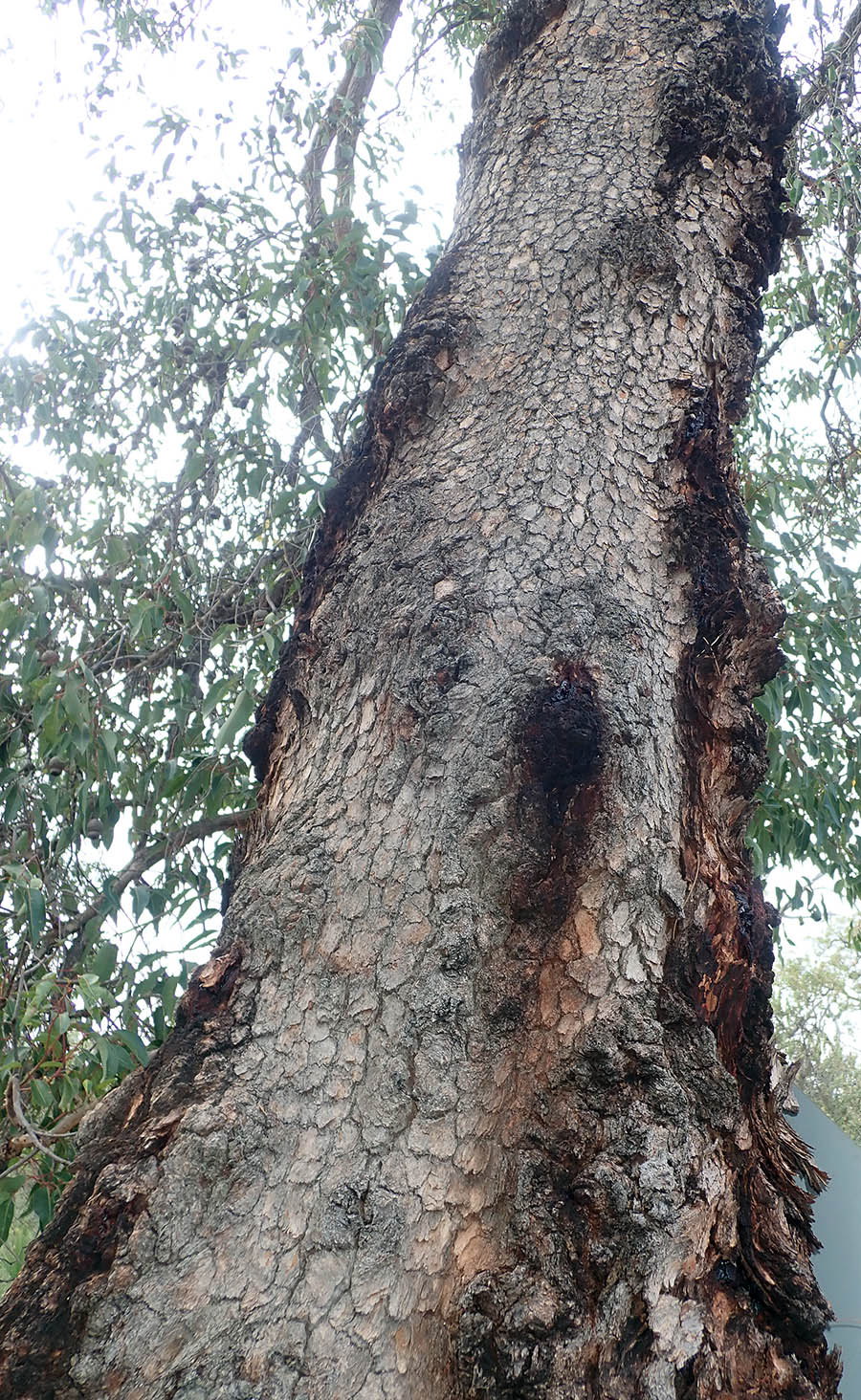 Corymbia calophylla, 'Marri'. This often tall tree has tessellated bark, which bleeds red sap when cut. An important tree that dominates the temperate forests that it lives in, and thus defines that vegetation type. Often grows with Eucalyptus marginata 'Jarrah'. Endemic to south-west Australia. 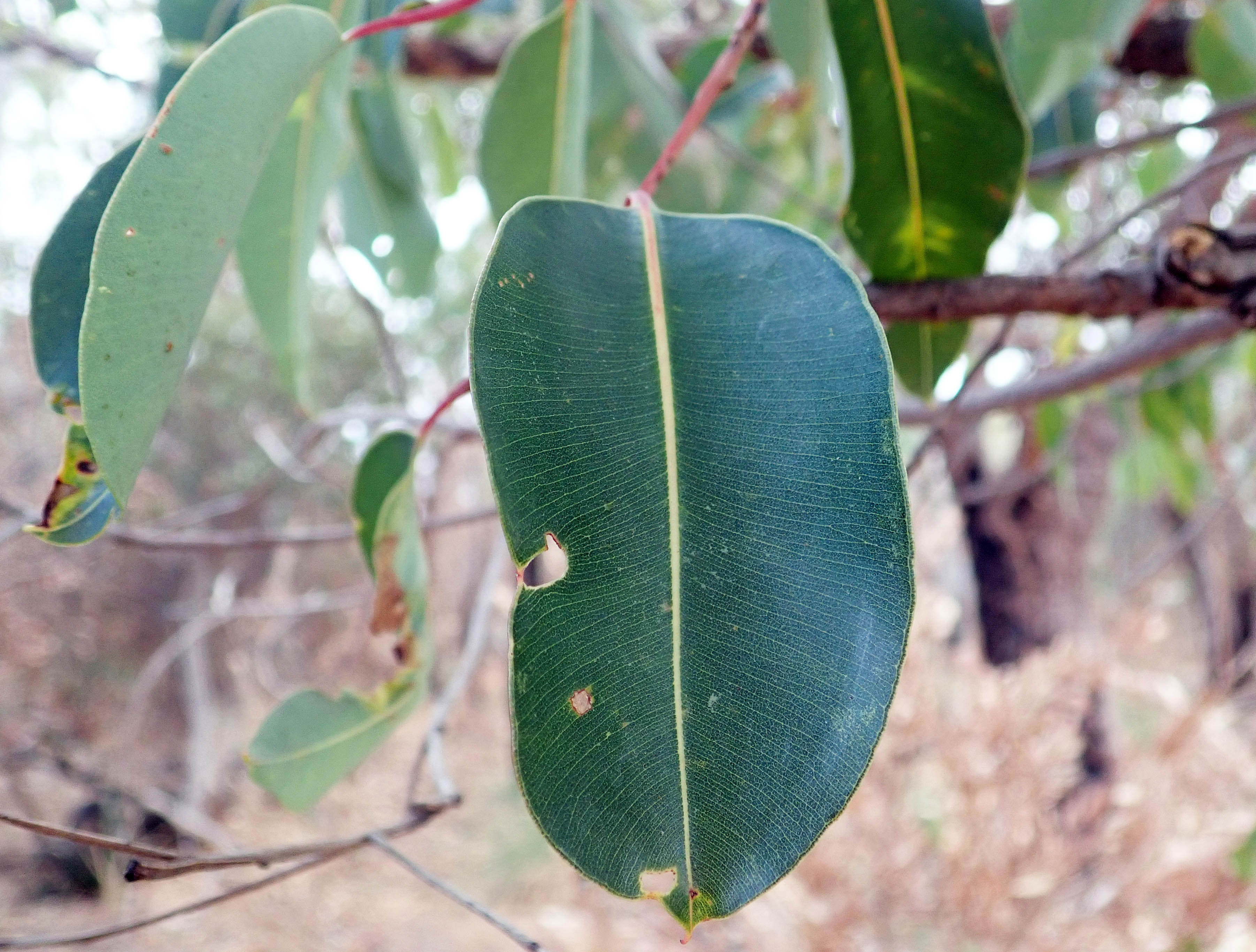 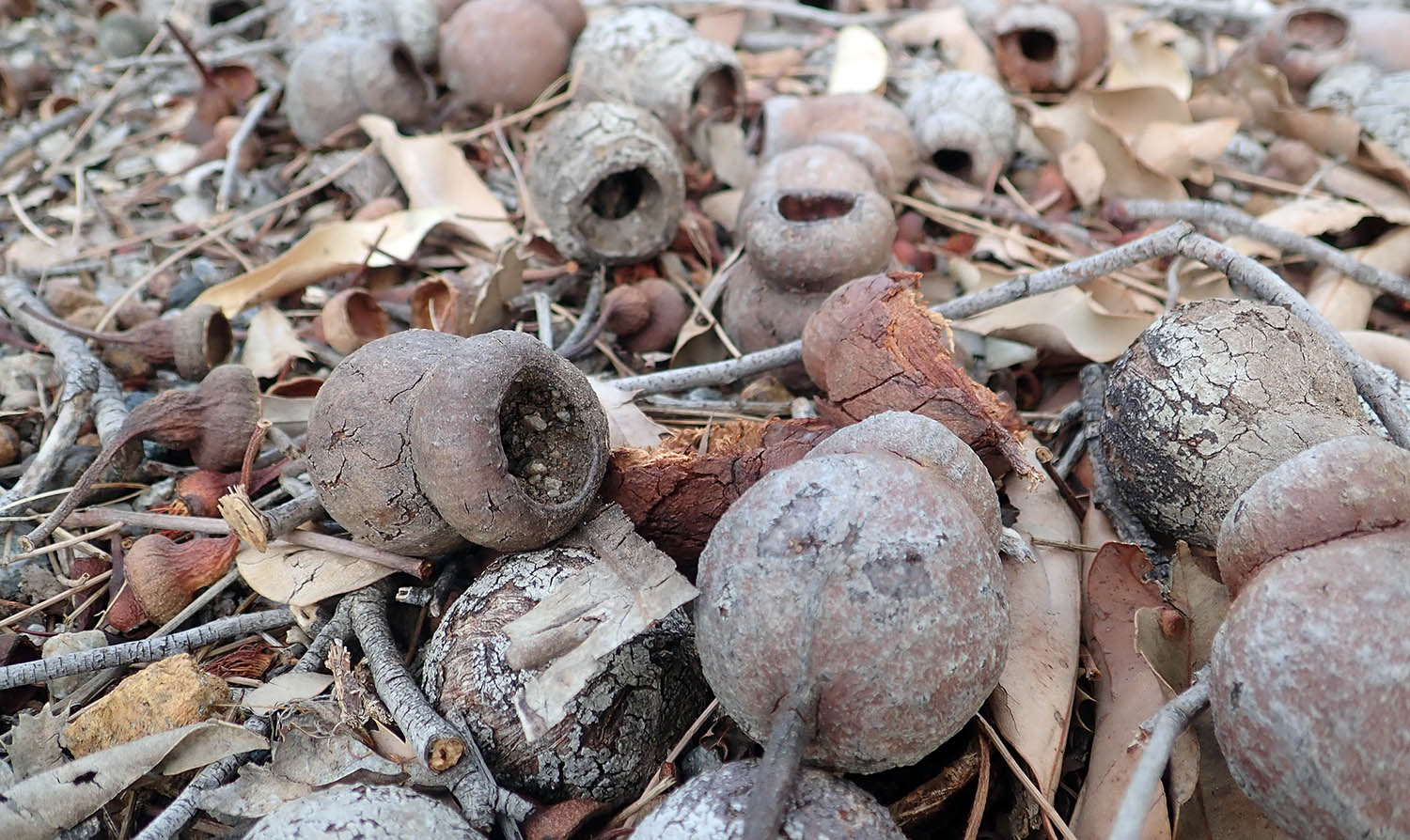 "Names are for tombstones, baby. Take this honky out and waste him!" Some 'Honky nuts'. (John Forrest National Park, Western Australia)

Corymbia calophylla, 'Marri' gum nuts are large for a bloodwood. They are known as 'Honky Nuts' and were thought to be the main inspiration for 'Snugglepot and Cuddlepie'. 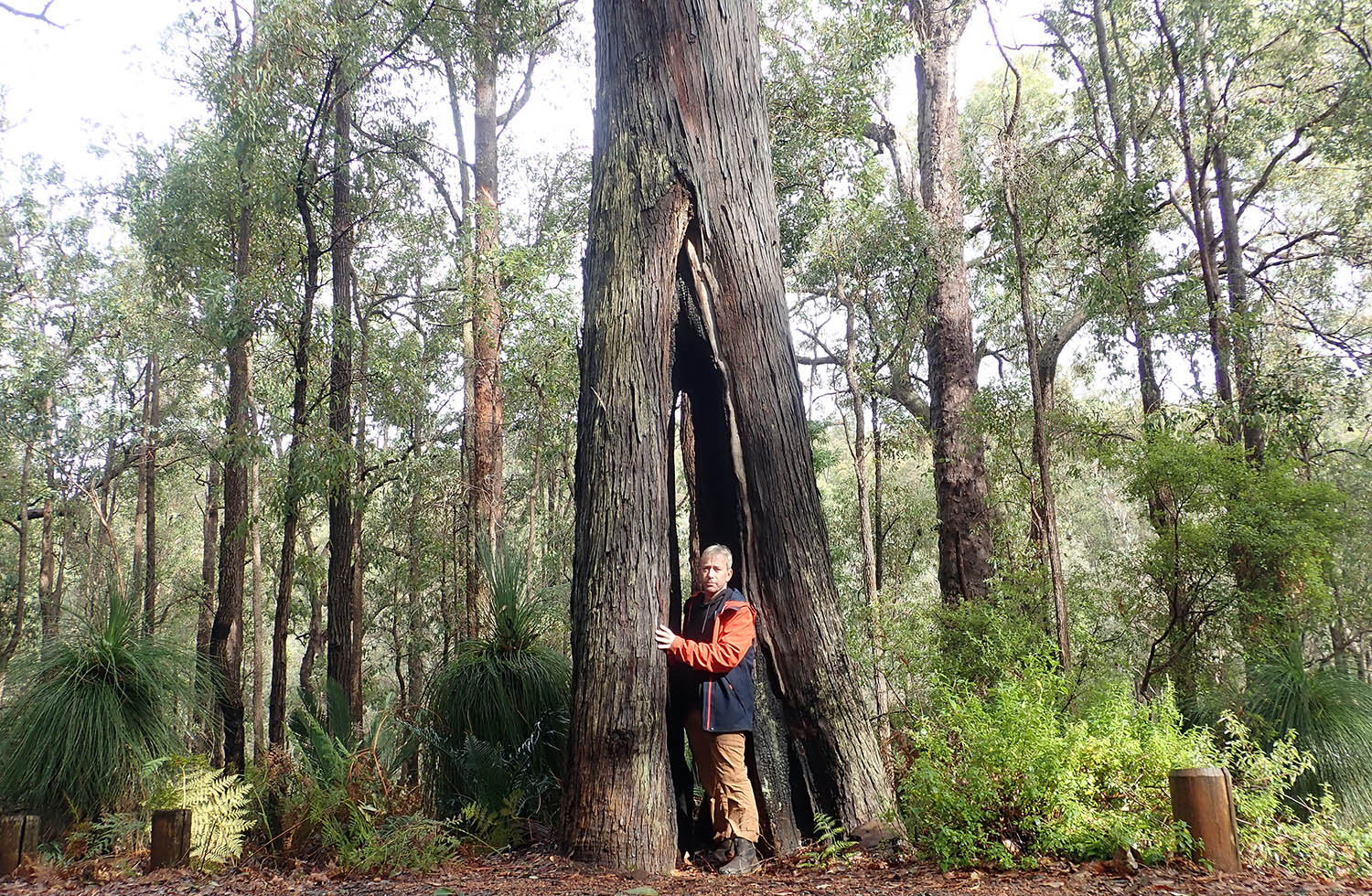 Eucalyptus marginata, 'Jarrah'. An important tree that dominates the temperate forests that it lives in, and thus defines that vegetation type. Often grows next to Corymbia calophyllum 'Marri'. Endemic to south-west Australia. 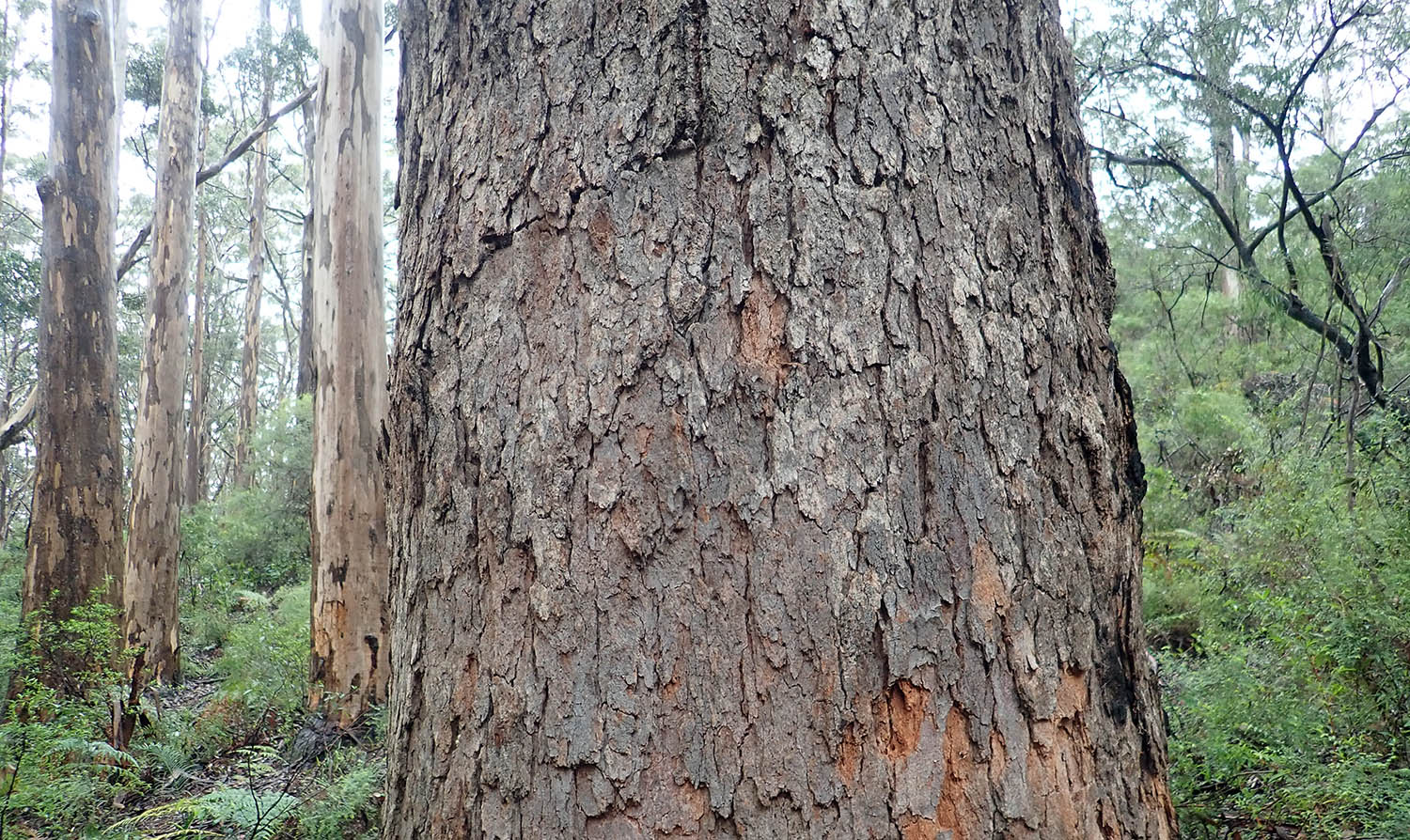 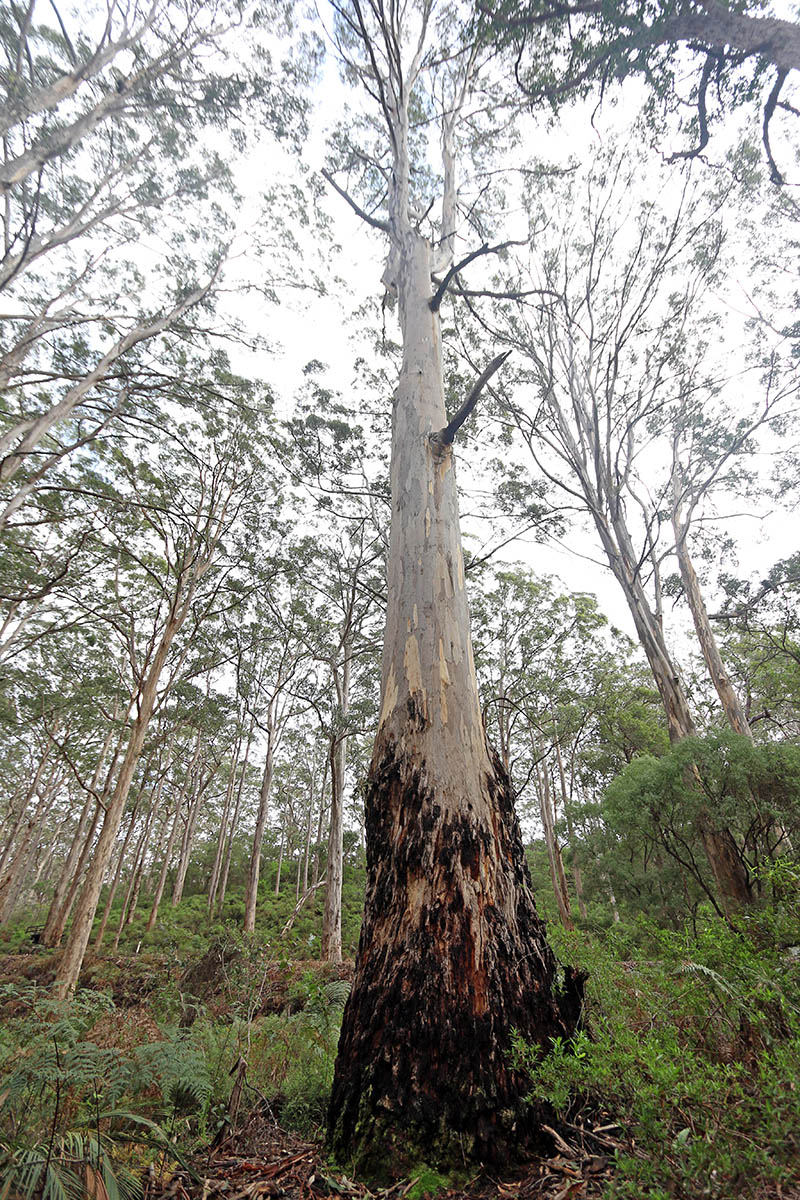 Eucalyptus diversicolor 'Karri'. Not to be confused with the similar sounding but unrelated 'Kauri Pines' of wet tropical Australsia. One of the tallest trees in the world. Trunk is tall and straight, pale, with peeling bark. Dominates certain areas to become it's own beautiful forest type. Endemic to south-west of Australia. 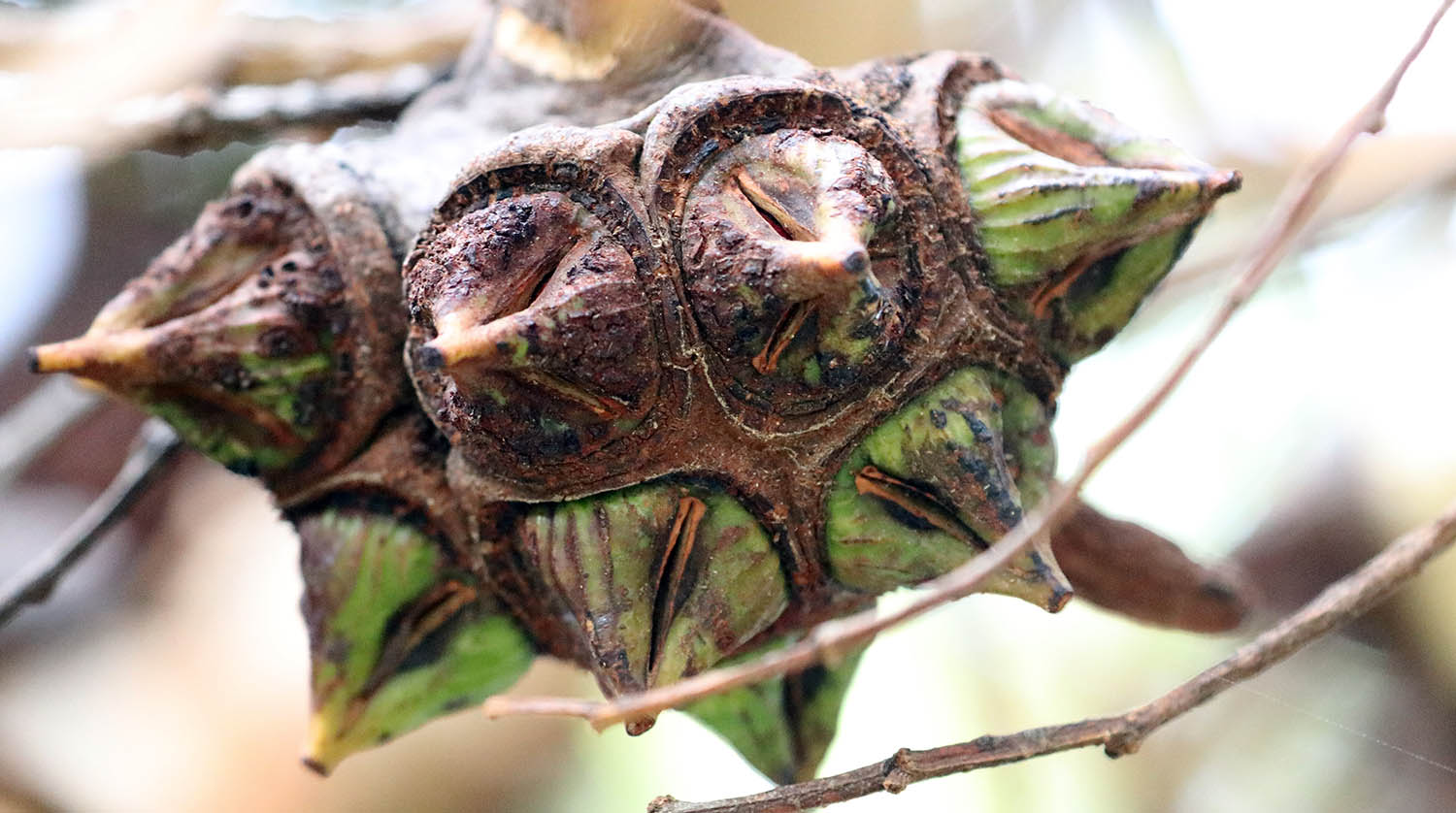 Eucalyptus lehmannii, 'Bushy Yate'. A group of several closely related species that have distinctive 'spiky ball' gum nut fruits. Relatively short tree, often mallee form. The flowers are initially held in a very long pointed cap (operculum) before it drops off and reveals a spray of yellow stamens. This is followed by a bizarre collection of 'gum nuts'; the fruits are ball shaped with persistent 'exserted valves' that appear like spikes. These fruits give it another common name of 'spider gum'. 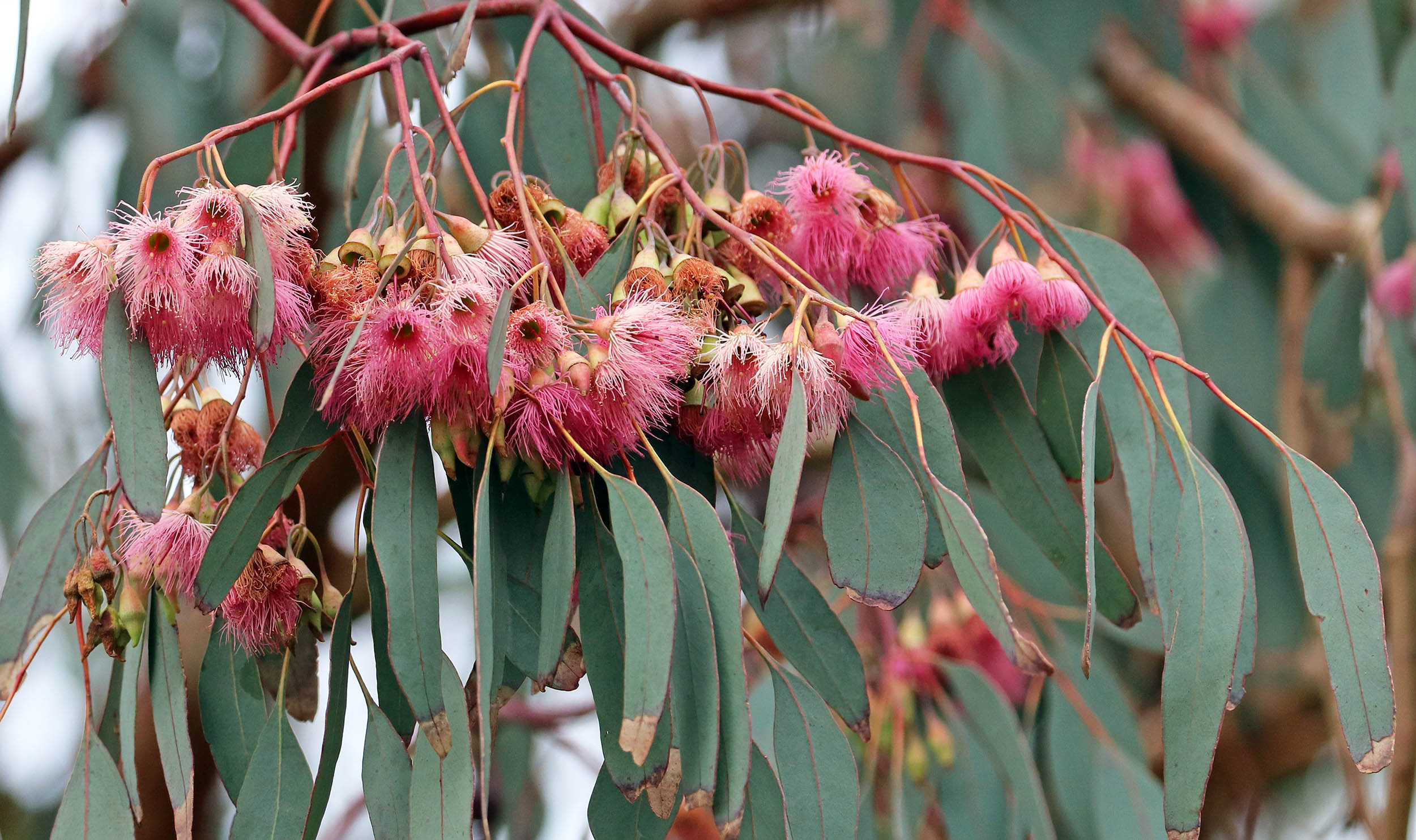 Eucalyptus sideroxylon, 'Red Ironbark'. Flowers can be white or beautiful pink or red. Found in patches in inland woodland in south-eastern Australia. Planted elsewhere for it's striking pink flowers.

There is only species in this genus. 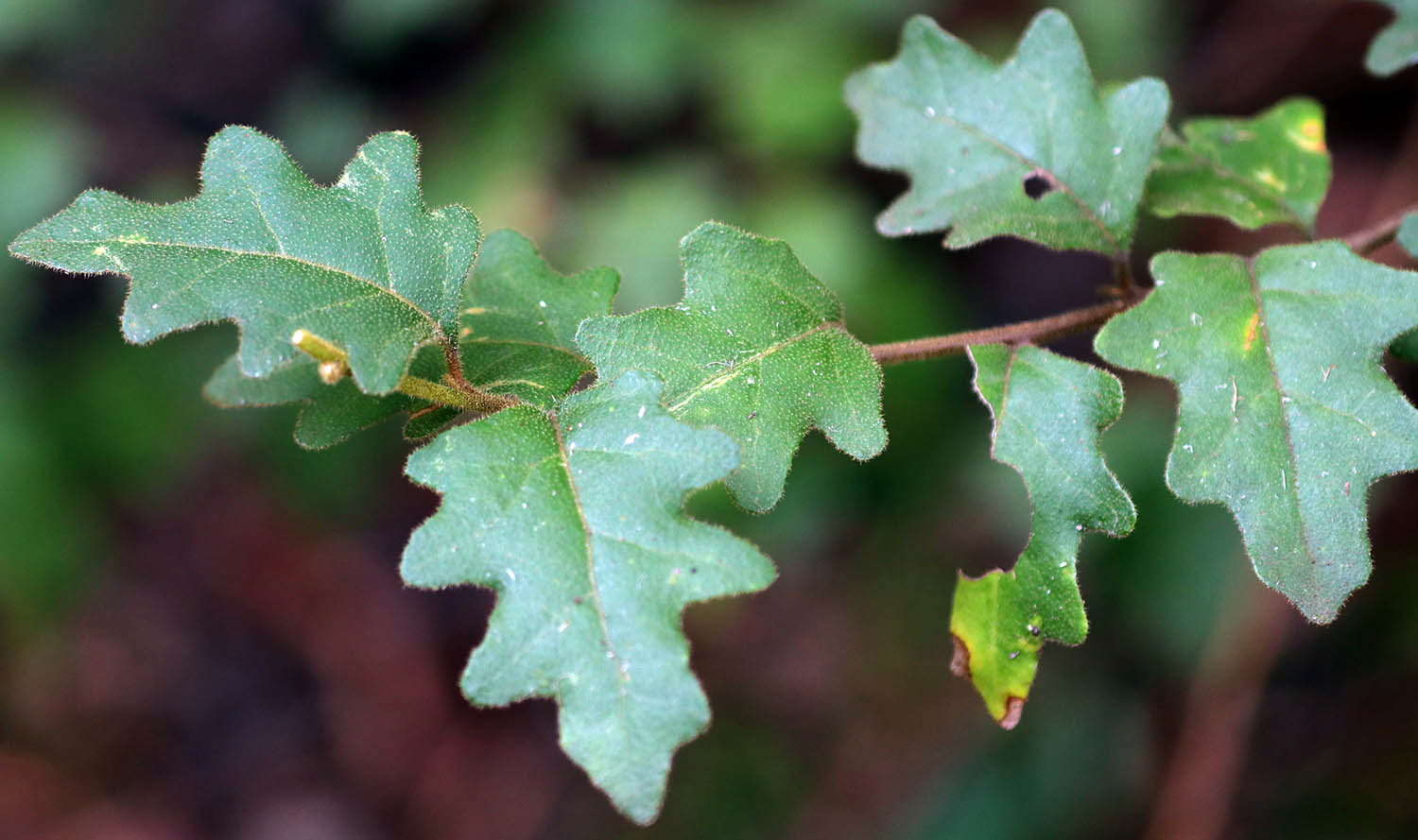 Chorilaena quercifolia, 'Oak-leaf Chorilaena''. Shrub. Endemic to the understory of the Karri forests of the south-west of Australia.

A small genus of small bushes endemic to temperate Australia. 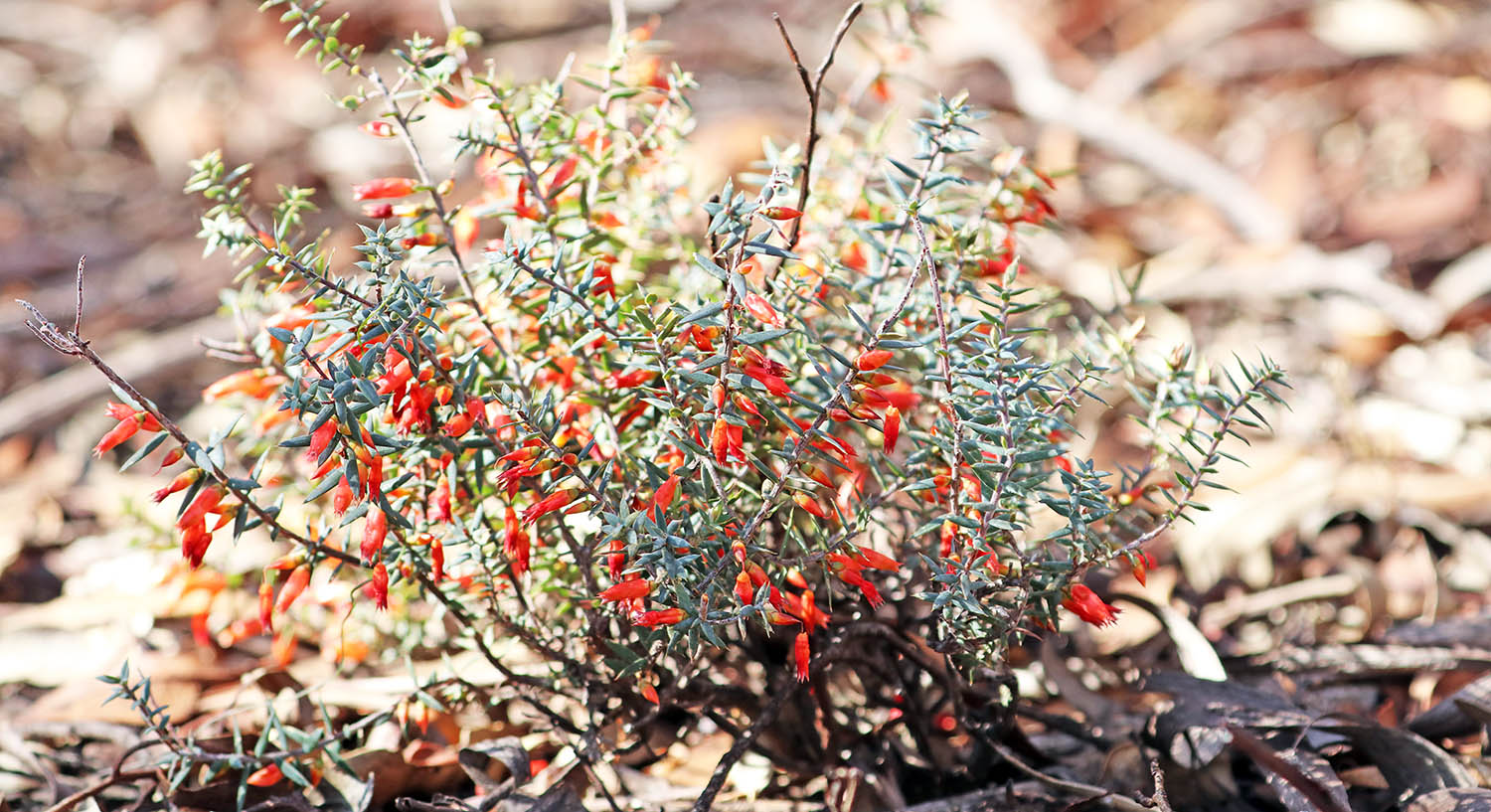 One of the most distinctive and recognizable of all flowers, the Scaevola has the petals on one side but not the other. 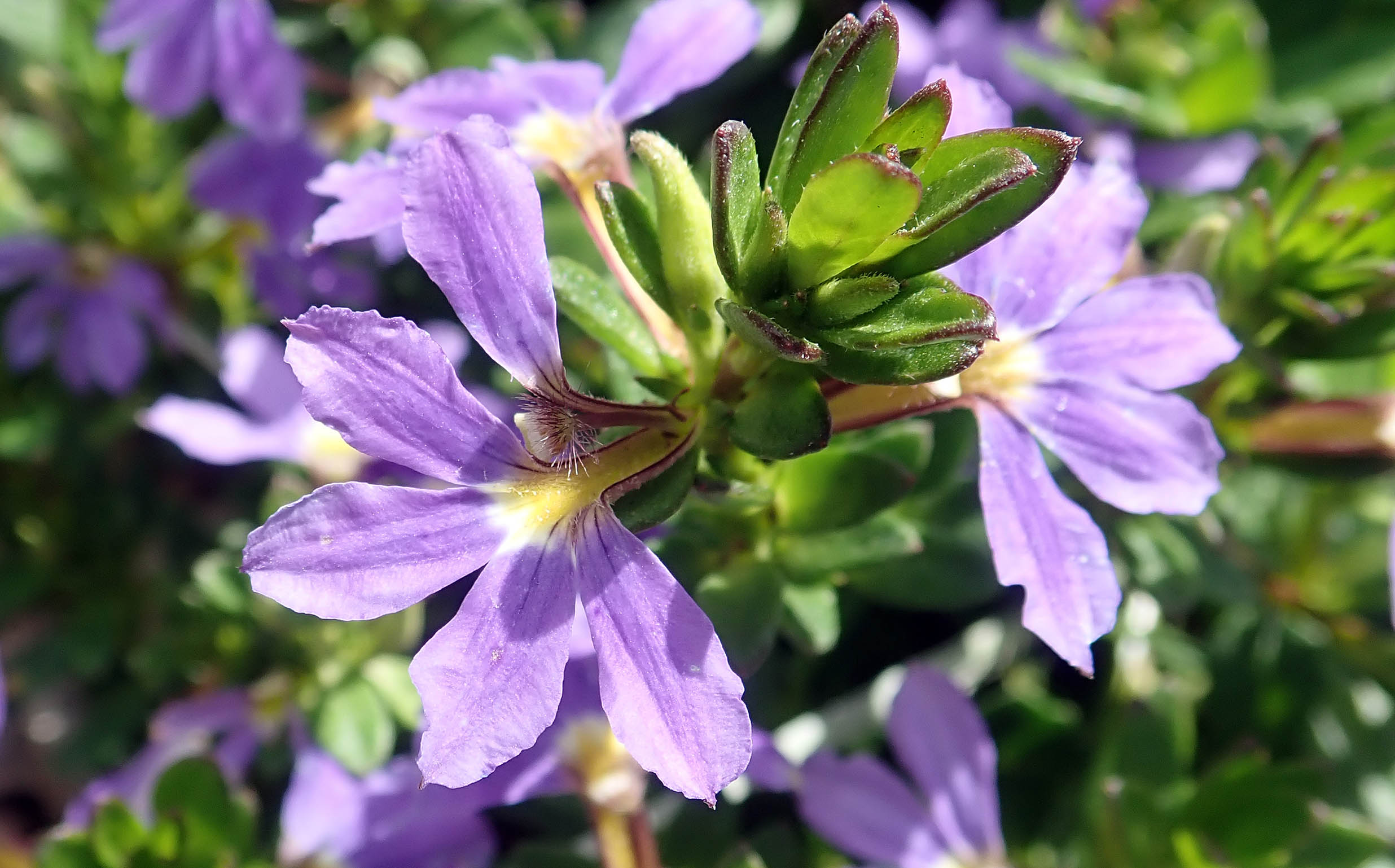