Macrotis lagotis, '(Greater) Bilby'. Bandicoot shaped, but with very long rabbit like ears. Digs down-spiralling burrows into which it shelters by day or hides from predators. A previously widespread species found in arid habitats across Australia, and until the turn of last century was recorded around Adelaide and Perth, however, it is now rare and mostly restricted to arid parts of north west. Has been re-introduced into Cape Peron area of Shark bay and some WA islands.

Many species of kangaroo and larger wallaby are sexually dimorphic, with the males being a different colour and much bigger than females.

Bettongia lesueur, 'Burrowing Bettong', 'Boodie'. Once very common, this species is mostly extinct on the mainland, now survives only on islands. Lived in dry woodlands and arid grasslands. 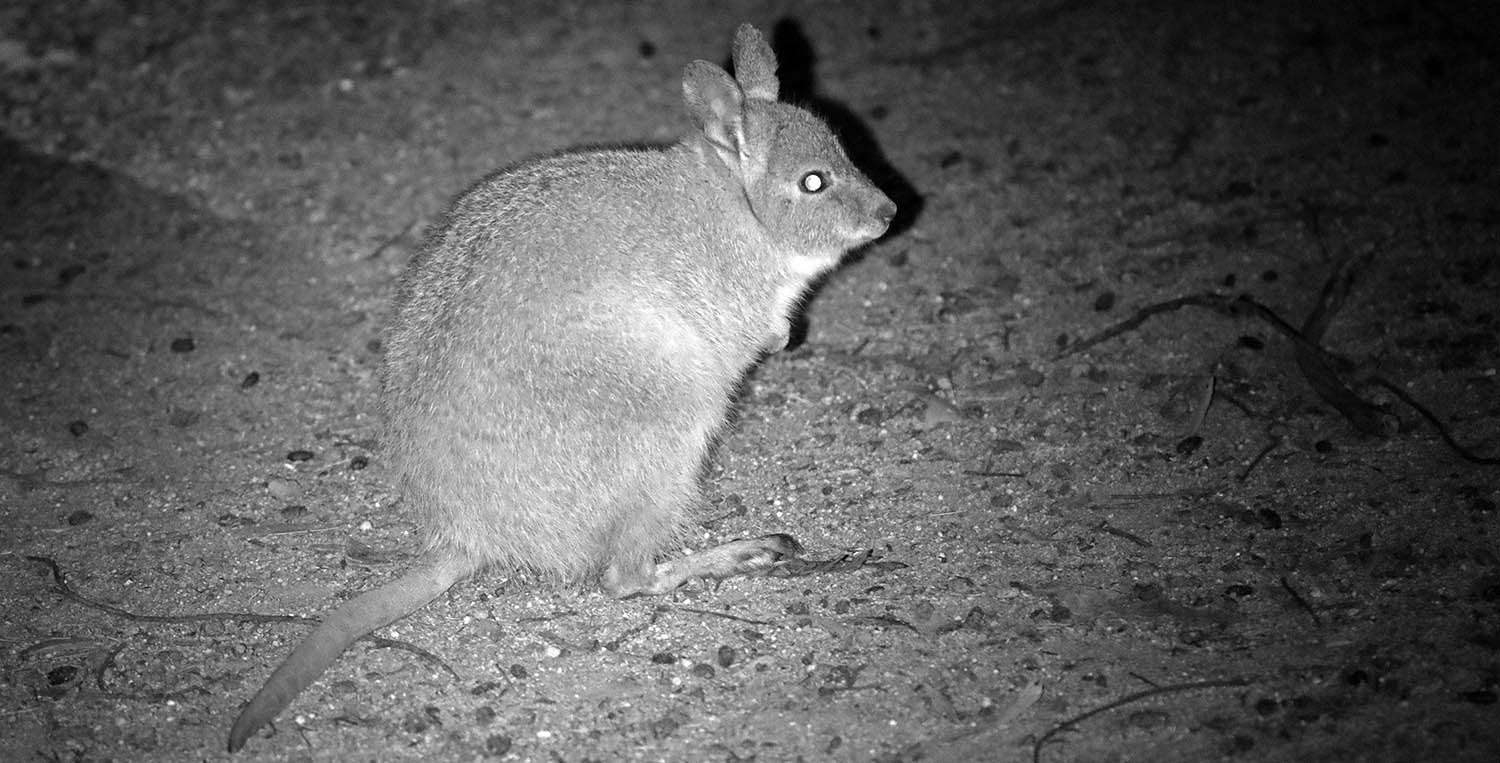 Lagorchestes hirsutus, 'Rufous Hare-Wallaby', 'Mala'. This species is now mostly extinct on the mainland, and survives only on islands. Lived in arid grasslands.

There are over 60 species of kangaroo and wallaby found Australia, including many species across the arid habitats of the continent.

Osphranter robustus, 'Euro', '(western) Wallaroo'. These large kangaroos have more developed fore-arms and longer fur than grey or red kangaroos (making them appear 'shaggier'). They live mostly on and around rocky hills, but are larger and clumsier in their rocky habitat than rock wallabies. They are usually seen in pairs or alone.  They are widespread across much of Australia.

Rock Wallabies are adapted to living within a rocky habitat.

Petrogale lateralis, 'Black-flanked Rock Wallaby'. Striking black markings along muzzle, under arms and on top of feet. A black stripe runs down along back. Found in rocky habitats across arid parts of western and central Australia. There are many isolated populations within this range. Some of the populations vary in chromosomal counts from each other, and could be considered ongoing speciation in action. 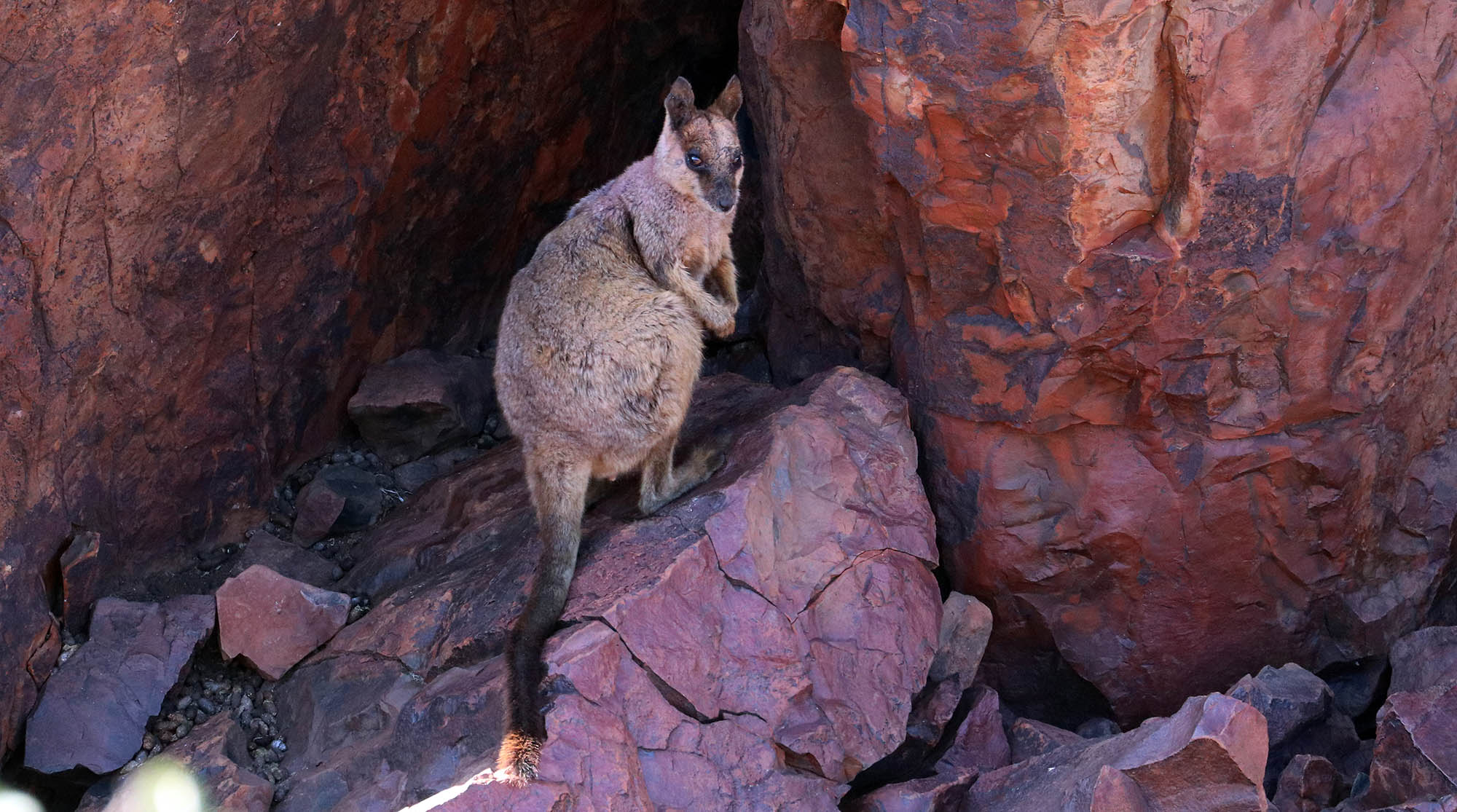 Petrogale rothschildi, 'Rothschild's Rock Wallaby'. Has a purple sheen on shoulders and back of head. Found in rocky habitats in Pilbara region, including islands.

Camels are the only hoofed mammals to mate in the sitting position. Lazy buggers. The males ejaculate three or four times during the mating session. Ok, not so lazy then.

Camelus dromedarius, 'Dromedary (one-humped) Camel'. Largest of the three extant camel species. As the name suggests, they have one hump on the back. When in heat, the males inflate part of their palate into a large red balloon (called the dulla), which hangs out of the side of their mouth like a swollen tongue. Apparently, the females are attracted to the male with their tongue hanging out (this doesn't work for humans). Also, it is not true that females attract the males with their camel toe. This is a domesticated species, and it is thought they have not existed in the wild in their native habitat for thousands of years. They are originally from the drier areas of northern Africa. They were introduced into Australia and it is thought there are over half a million feral individuals wandering around western Queensland, northern SA/southern NT, and mostly Western Australia.

Canis lupus, 'Dog', 'Dingo'. Dingoes are a a type of dog, and they inter-breed freely. The wild dog was introduced to Australia some 5000-6000 years ago. They no doubt had a far larger effect than we can ever know. Dogs still continue to be a major problem today, killing wallabies.

Back to the page on Australian arid shrublands and grasslands