While the diversity of birds in the Australian arid areas is not high compared to the other habitats on the continent, or the equivalent arid areas of Africa, there are many interesting and beautiful species to be found...

Dromaius novaehollandiae, 'Emu'. With emus, it is the males that raise the young.

Emus can run up to 50 kilometres an hour. They often run in zig-zagging confused directions.

This family includes some of the heaviest of all flying birds. The males often have a distinctive display where they erect their feathers and/or inflate their throat. They are found in open areas across the Old World tropics, but are most obvious in Africa. There is one species in Australia and it is usually seen in arid grasslands.

Ardeotis australis, 'Australian Bustard'. This is a large bird, being about a metre in height. Despite the size, they are often  not noticed by drivers as they race past on outback roads. These days, they are usually found in arid tropical grasslands, although they were previously more widespread across Australia.

Aquila audax, 'Wedge-tailed Eagle'. This is the largest eagle in Australia. It is found across the drier open habitats across much of the continent, including being a common sight on the side of roads where it feeds on roadkill. In this way, it seems to fill in a niche equivalent to old world vultures in Africa and Asia. However, they are very wary when approached at carcasses, and quickly take off when approached.

Eolophus (Cacatua) roseicapilla, Galah. Widespread in any dry habitats across most of Australia.

Melopsittacus undulatus, 'Budgerigar'. Wild budgies are usually green and yellow, not the other colours seen in cage birds. They are normally seen in flocks, often large. They are nomadic. So putting a nomadic and social bird in a tiny cage by itself, is probably very illogical, but the 'budgie' is the third most popular pet in the world, after the puppy and the pussy. Found in arid habitats across inland Australia.

Chlamydera guttata, 'Western Bowerbird'. Dark scales on back. Yellowish tint on underbelly. Pink on back of neck.

Western Bowerbirds are found in arid woodlands, particularly in gorges and gullies, in Central Australia and the Pilbara. They are often seen in fig trees along rocky canyons.

The pink patch on the back of the neck of a Western Bowerbird. 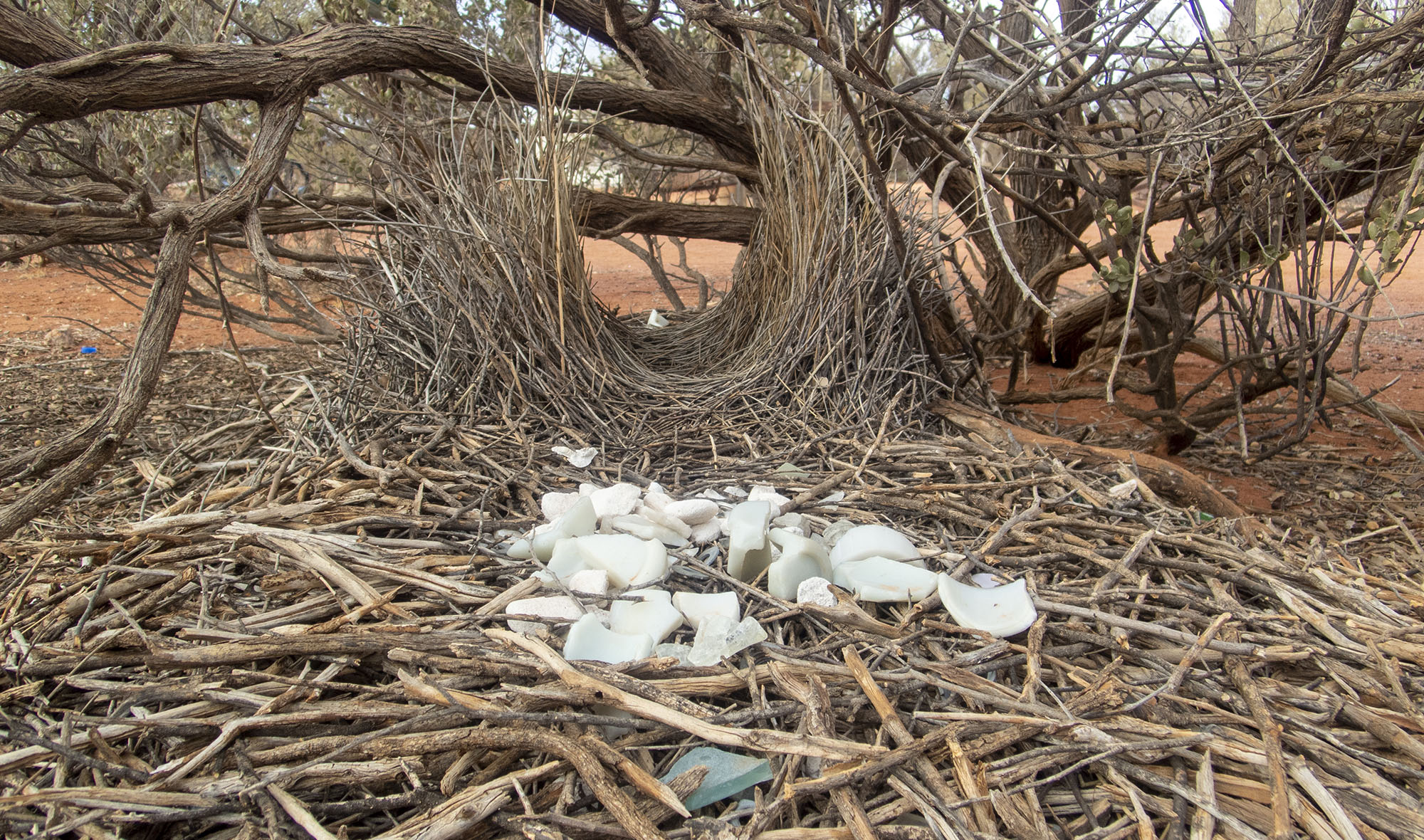 The Western Bowerbird collects mostly white objects (there is a piece of green glass there as well).

This family includes 67 species that were sometimes called the 'Australian Warblers', but they are not related to either the true Old Warblers, the New World Leaf Warblers, or the various other 'warblers'. They are all small birds.

Acanthiza apicalis, 'Inland Thornbill'. Streaky underneath. Tiny but common bird of dry habitats across much of temperate Australia. Most common in the south west where it also lives in wetter habitats. The Inland Thornbill is similar to Brown Thornbill, but while former is found across much of the Australian continent below the tropics, the latter is confined to the south east.

(between Geraldton and Cue, W.A.)

Acanthiza uropygialis, 'Chestnut-rumped Thornbill'. Streaking on forehead, light coloured eye with contrasting centre black pupil. As suggested by common name, there is a rufous patch on back of tail, which is obvious in flight (but barely visible in photo above). Found in mulga and other dry habitats across much of temperate inland Australia, absent from wetter areas such as tropics and south-west and south-east. The Chestnut-rumped Thornbill is similar to Slaty-backed Thornbill, but latter has darker eye.

Honeyeaters are the biggest family of birds in Australasia, so naturally there are many species to be seen in the arid habitats.

Manorina flavigula, 'Yellow-throated Miner'. Miners usually hang out in groups, and are very resourceful and adaptable birds. They are a common bird of drier areas across Australia. Along the wetter east coast they are replaced by the similar Noisy Miner.

Ptilotula penicillata, 'White-plumed Honeyeater'. Feed on nectar and small fruits, but they mostly glean leaves for lerps. Found in many different habitats across much of Australia, including in Eucalyptus River Red Gums trees along dry watercourses in arid areas.

Acanthagenys rufogularis, 'Spiny-cheeked Honeyeater'. This is the only species in this genus. They are large honeyeaters, with a striking pink line from the bill, and contrasting streaky underparts. It is endemic to Australia, being found in arid habitats across most of the continent.

Certhionyx variegatus, 'Pied Honeyeater'. Males do displays by flying high into the air and back down again, while calling their repetitive mournful whistle (which sounds like a Little Grassbird'). They are usually thought of as being nomadic, following the flowering of desert species such as Eremophila. Found in arid habitats across central and western Australia.

I know that Crimson Chats eat insects, because in half of my photographs they seem to have one in their mouth! (Stuart Highway, north of Coober Pedy)

Chats are a type of honeyeater that has evolved to feed on the ground of arid areas, where they feed on the nectar on low flowers, but where they also catch a lot of invertebrates.

Epthianura tricolor, 'Crimson Chat'. Males are bright red. Found across Australia in arid areas, where they are thought to be nomadic, following rain and the resulting irruption of insects.

Pomatostomus temporalis, 'Grey-crowned Babbler'. Usually seen in noisy groups where they bounce around and chatter, yap and 'meow' with each other quite comically. Found in tropical and arid woodlands across central and northern Australia and into southern New Guinea.

The Whistlers, as suggested by their common name, have piercing whistling calls.

Psophodes occidentalis, 'Chiming Wedgebill'. Brown bird with forward pointing crest. One of the most iconic and distinctive calls of the Australian desert; it is a piercing series of four fast descending notes followed by a short sharp squawk, that is repeated constantly and sounds like a squeaky uneven wheel rolling along! Endemic to Australia, where it is found in the drier habitats of central and western Australia.

Cracticus nigrogularis, 'Pied Butcherbird'. Beautiful fluted call. Found in a variety or open habitats across much of Australia.

Woodswallows are not related to 'true' swallows, but are in the same family as Australasian Butcherbirds. They are small and usually include grey, black and white in their colour. They often perch on exposed branches.

Rhipidura leucophrys, 'Willie Wagtail', 'Djididjid (Noongar)'. Despite the first common name, a type of fantail, not a wagtail. Flicks it's tail from side to side. Call is a persistent and nervous scissory "tcht-tcht-tcht-tcht'. The second common name is one of many Australian Aboriginal names that are onomatopoeic.  This is arguably Australia's most commonly seen bird. Adaptable to many habitats, including around settlements in arid regions across Australia.

There are only two species in this small family. They are both endemic to Australia.

Struthidea cinerea, 'Apostlebird'. The main common name is because the bird is almost always in groups, often a dozen. Because this bird is common and has a lot of character, it has a lot of other common names; 'Grey Jumper', 'Lousy Jack', ”awky sqwarky” or 'CWA (country womens association) bird'. They have a variety a cute squawks and squeaks and are lively, curious and fun to watch. They live in various types of woodlands, including in campsites and roadsides in arid areas, across the eastern third of Australia.

Corvus spp. The common species found throughout inland dry areas are the 'Little Crow',  'Australian Raven' and 'Torresian Crow'. Adults have white eyes. Which species is this? Dunno. Probably the 'Little Crow', which is the more common of the corvids around Alice Springs.

The Australasian Robins are found in Australia, New Guinea and New Zealand. They are not related to the European Robins after which they were named, nor are they related to the American Robins.

Melanodryas cucullata, 'Hooded Robin'. Found in open habitats over much of Australia.

Oreoica gutturalis, 'Crested Bellbird'. One of the birds most distinctive of the Australian arid habitats. The black bib and bright orange eye are distinct features of the male. They are usually seen hopping along the ground between mulga bushes, where they apparently feed on insects and seeds. Their call is one of central Australia's most evocative and far-carrying; a repetitive and slightly honking morse code; the first two notes slow, and the following three much quicker. Often, the male and female do a duet, with the male making this previous call, and the female accenting the last notes with her more honking bell like notes.