I visited this island on subantarctic expeditions with Orion Cruises.

Macquarie Island sits at 54 degrees latitude, right on the Antarctic or Polar front. The island is long and thin along a north-south axis, being 5km wide and over 30km long, and over 12,700 hectares in size. But what people don't expect is the height. It is made up of a plateau several hundred metres in height, with the highest peak being Mt. Hamilton, at over 430 metres.  The island is located at the end of a chain of islands coming off the south west of New Zealand, and is south-east some 1,460 kilometres off Hobart.

Macquarie Island is located on the edge of the tectonic plates, and is in fact the result of tectonic activity. However, they are not volcanic islands, but made up oceanic crust created some 20 million years ago at some 2000-4000 metres depth, and then pushed up above the water some time in the last 700,000 years. In fact, it is for this reason (not the huge amount of wildlife, as one would think), that it was accepted for World Heritage status, for Macquarie Island is one of the few examples in the world of an island that is made up of oceanic crust (usually underwater) that is above the surface of the ocean. 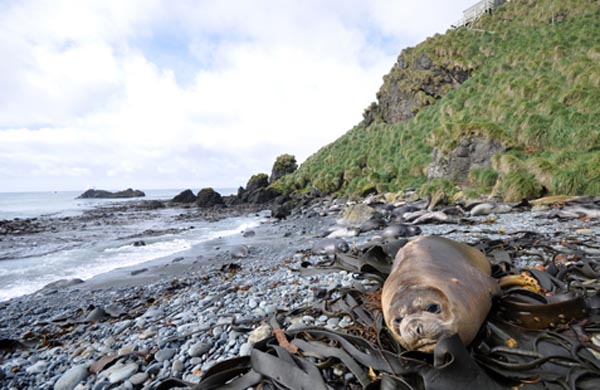 a seal having rest on a bed of seaweed (Damon Ramsey)

Being in the path of the 'roaring forties' and 'furious fifties', the weather is very changeable. The island has a typical sub-antarctic climate; cold and misty. There is occasional snow reported in winter, but it doesn't remain for long. When visiting on an expedition ship it is recommended you have thermals, waterproof jackets and rubber boots for landing.

The islands territory was initially claimed and contested by both New Zealand and Australia. As with most subantarctic islands, initial human history involved the direct exploiting of wildlife such as 'sealing' and 'whaling'. Even though it runs on an underwater mountain chain coming out from New Zealand, it was eventually successfully claimed by Australia, where it is managed by the state of Tasmania.

There has been several introduced animals that have caused devastation on the island, including goats, rats, rabbits, and redpoll. Goats have been eradicated. Rats have recently been eradicated. When I was there, they were working on getting rid of the rabbits. The main buildings are the research station,  and here there are seals and penguins just lying around the grounds. 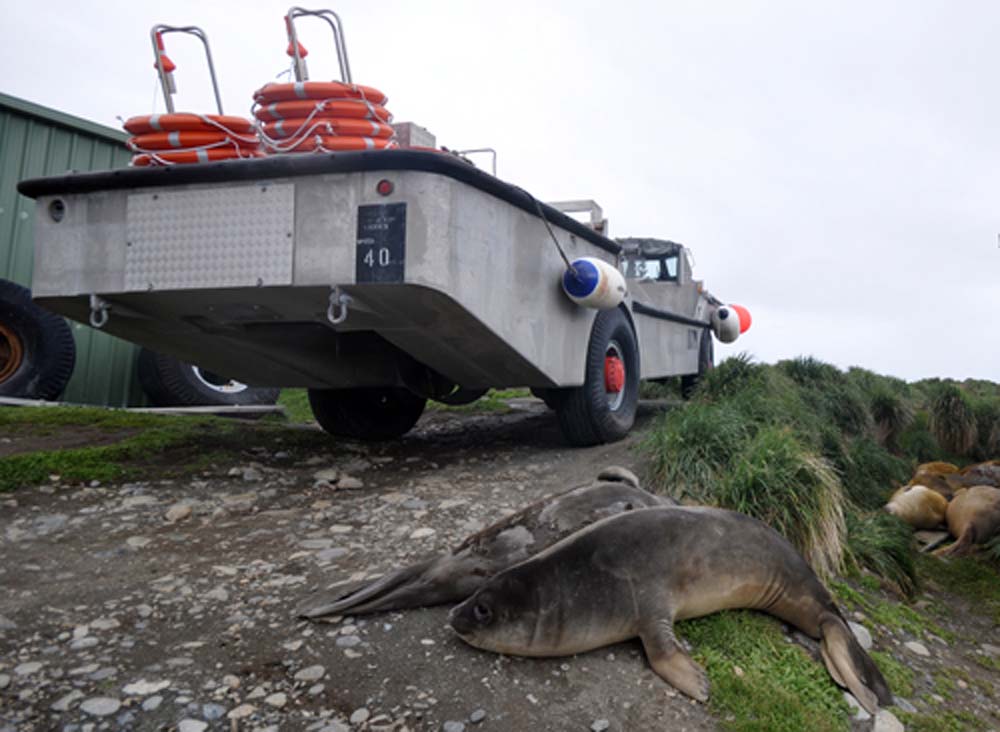 On Macquarie Island you always look behind you before you back out of the driveway...

There is some 46 species of vascular plants recorded on the island, as well as 80 species of mosses and 100 species of lichen.

This is the main reason to visit Macquarie Island.

Some of the best birding is on the way to Macquarie Island. You can see many sea birds as you travel from Tasmania or New Zealand, as one travels through various climate zones. Thus, even if the weather is too rough, and there is no landing (which may happen when you go with an expedition ship), there are still many birds to be seen: you can see penguins in the water around the island, as well as a variety of birds, such as albatross and petrels, in the air.

There have been about 79 species recorded on Macquarie Island, with some 20 species of breeding birds on the island. One of the main reasons to visit the island is to see birds breeding on the islands, especially penguins, where there are 3 relatively accessible species: Royal, King, and Gentoo.

Macquarie Island is the only place in the world where Royal Penguins breed. There are some 900,000 breeding pairs in over 50 colonies around the island.

The King Penguins are arguably the most attractive of the penguins, with bright and saturated colours. They look like and are related to the Emperor Penguins found further south in Antarctica. 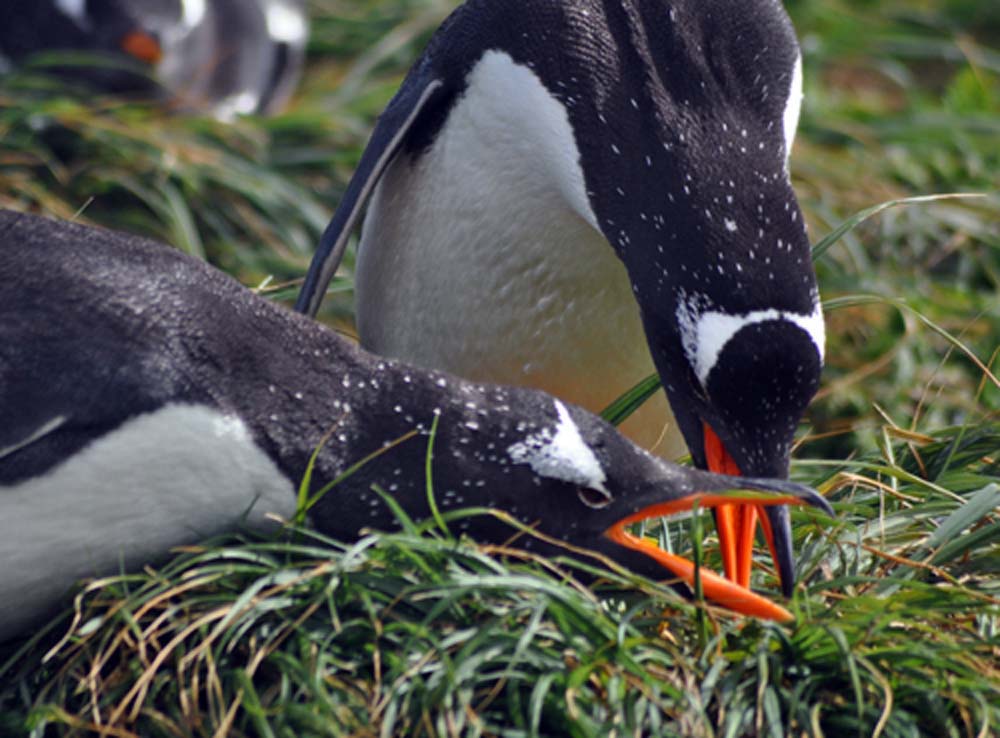 Gentoo Penguins breed around the station

Macquarie Island is significant because it is thought to be the only place in the region that has both species of giant petrels breeding. Both are large petrels that in flight almost like albatross, except they are 'dirtier' in appearance, and have much thicker bills due to the size of the tube nostrils. The northern petrel has a red tip to the bill, while the southern giant petrel has a greenish tinge.

There are other birds about. As with many other subantarctic islands where there is breeding, there are usually scavengers such as skua. These are dark birds, the look and size of a very large gull. And if you see a cormorant on Macquarie Island, it is the endemic Macquarie Island shag.

The island's lowlands are also literally covered in mammals. There are huge amounts of elephant seals, including massive males, the older ones with a floppy elongated 'elephant' like snout. The place is great for watching seal behaviour... 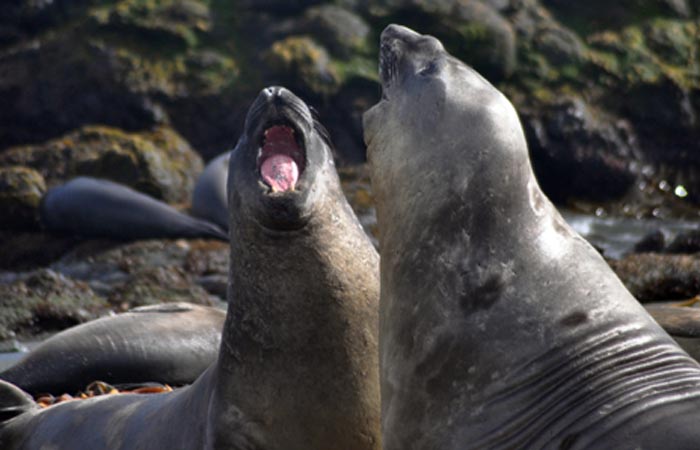 Most ships go to the ranger station in the north. Zodiacs often land at Sandy Bay, where there are massive congregations of Southern Elephant seals, King Penguins and Royal Penguins.

It is really only realistically accessible by ship. However, the Australian/New Zealand side is not as regularly visited as the South American subantarctics, due to the longer distances and inconvenience. Several expedition companies occasionally go there, including Lindblad (with Orion National Geo), Noble Caledonia (on charters) , Aurora (based from Australia), Heritage (New Zealand based), Silver Sea and Ponant.