I spent a couple of months in India in the 1990's, and tried to experience a range of different ecosystems and national parks across the country. This was before digital cameras, so I only have a few dodgy film shots I printed off left. I visited Kanha as I knew this was probably best chance to see a tiger in the wild.

It is located in Central India, and therefore has a subtropical climate. The vegetation is made of woodland and grassland. The grasslands that are interspersed between the open forests are supposedly areas where there were previous clearings for villages, that have long since gone. The habitats and their animals were the inspiration for Kipling's "the Jungle Book".

Kanha National Park is one India's best national parks for wildlife. One of the main reasons to come here is to see the larger animals, the megafauna. It is those clearings that are good places to see wildlife...

The biggest of all land wildlife is of course the Elephant. This is the Asian elephant. There are many domesticated elephants padding around India, but it is more difficult to see wild specimens. 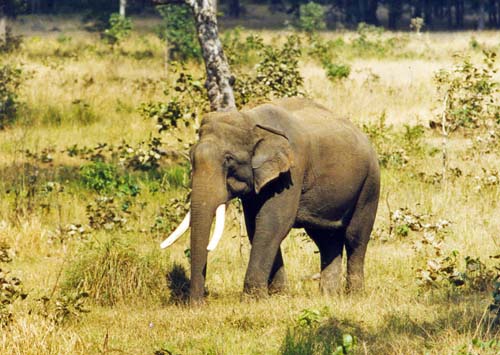 Large wild cattle called Gaur can be seen in groups in the clearings in southern and central India. They are massive animals. In fact, they are the tallest members of the Bovidae family (the cattle, antelope, goat and sheep). 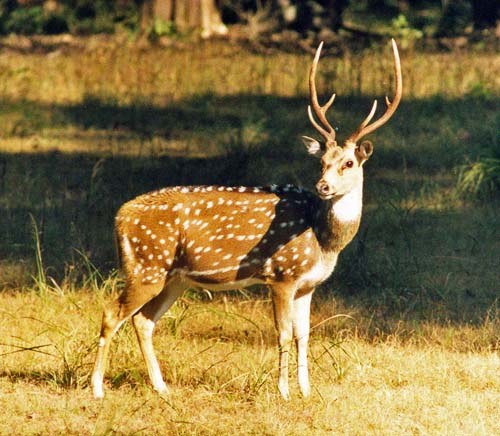 This is the common deer of India. It is called the Spotted Deer, but known locally as Cheetal. They often hang out with langur monkeys.

One of the main reasons to come here is to see tiger. In fact, this is probably the best place that I know of in the world to see tigers in the wild. 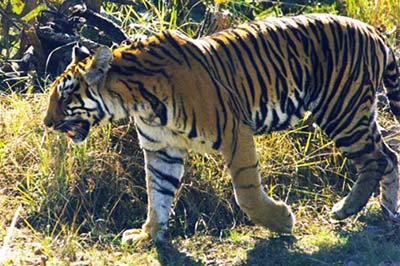 A tiger, seen from the safety of on top of an elephant (Damon Ramsey)