where to find wildlife in
New Zealand

I was not aiming to go to New Zealand so early in my working life, due to its low diversity of terrestrial animals, and thinking I would save it as a destination for when I was 'old', due to its safety and closeness to Australia. However, because of my biology training and experience taking nature and wildlife tours, I was employed to take various groups to New Zealand, including some zoo and education programmes in the 1990's, and have been gone there every year during the summer for the last ten years on various ships (Millenium, Mercury, Oceanic Princess/Discoverer, Orion, Caledonian Sky and Silver Discoverer).

New Zealand is a very safe country, with a forward thinking and progressive people that seem to take every opportunity in a very fortunate country. Unlike Australia, where most small country towns and urban areas has a certain sameness, many of the major towns in New Zealand have a different orgin, history and feel; Dunedin, Akaroa, Christchurch, Kaikoura, Wellington, Napier, Gisborne, Rotorua, Auckland, are all interesting places in their own right. Best of all, in most places in New Zealand, you can great coffee!

The land fauna is extremely poor, with much cleared land, and as the biologist or naturalist will notice as they travel, there are no native mammals to be seen, and most of the birds seen inland are introduced species.

However, it has a biologically rich and beautifully varied coastline, with some of the highest diversity of marine mammals and sea birds in the world. Additionally, what is left of the land-based rainforest birds tends to only be common on islands and remote coasts.

Thus nature based travel in New Zealand is probably best appeciated by doing coastal and sea based travelling, either driving in a car and taking short boat trips or flying to islands, or even better, being on a ship.

There is a catch, however. The weather and sea conditions around New Zealand can be very rough, affecting even big ships. I've done a number of trips with ships up and down the coasts of both main islands, and I have experienced bad weather at every single region at some time. There is also big trade off with ship size. I have travelled the coast in four different sized ships; the bigger cruise ships are much more stable, but it so much harder to see wildlife. And while you see more on the smaller expedition ships, they become very uncomfortable during rough weather. So the best trips are probably on the 'average' expedition size; those ships about 100 metres in length with 100 or so passengers. 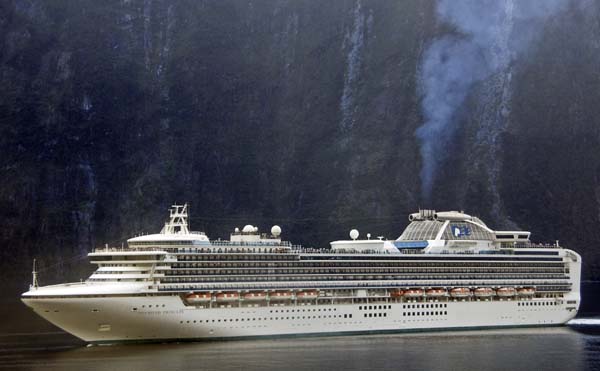 There are various places in New Zealand to check out.

The largest wilderness area of New Zealand is in the extreme south west, the remote and rugged Fiordland. You can go under the water at the Milford Sound Underwater Observatory.

In the middle of the country are the Marlborough Sounds, a nice mix of elements from the warmer temperate forest in the north  and the cooler forest of the south.

If you want to see hundreds of Australasian Gannets close up, Cape Kidnappers (outside of Napier) allows observation and photography of these amazing birds.

For land birds, one of the best places to see now rare native species in their native forest habitat is Ulva Island, off Stewart Island.

For marine wildlife, such as albatross and dolphins & whales the best place is Kaikoura.

Even better for wildlife are the remote New Zealand subantarctic islands, such as the Snares, Campbell and Auckland Islands.

There is much spectacular scenery along the coast, with varied geological scenery. One of the most symmetrical volcanoes in the world is Taranaki in Mt. Egmont national park. If you want to land on a live volcanic island, it doesn't get more spectacular than White Island.