where to find wildlife in
Australia

When I was based in Australia, I lived in 5 different states/territories, and worked in all states except ACT. 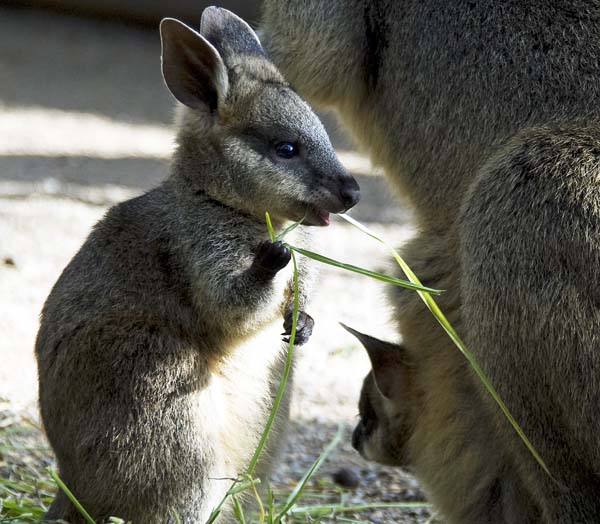 Australia can be viewed in three ways; as an island, as a continent, and as a country. From a biologist's point of view, we often refer to it as the "island continent". If seen as an island, it is the world's largest (and no, Greenland is not larger; it just looks that way on some of the old fashioned maps). As a continent, it is the world's smallest.  And as a country it is the sixth biggest in the world (after Russia, Canada, China, the U.S.A. and Brazil). It covers over 7.6 million square kilometres, and is roughly the size of the continental United States, without the state of Alaska. Australia has a third of its land within the tropics.

Geographically, Australia distinguishes itself by its extreme flatness. It is in fact the flattest of all continents. The biggest range (or a series of ranges) is the 'Great Dividing Range', which separates the wetter eastern coastal slice from the drier western majority of the continent. But these 'ranges' are small by international standards.

Australia is also the world's second driest continent (Antarctica is the driest). In fact, the Mississippi/Missouri river system in the USA drains out more water than comes off the ENTIRE Australian continent. All of this doesn't affect most Australians, however, as the majoriy of us live along the comparatively wetter, topographically varied east coast.

Australia is a very safe place to travel from a cultural point of view. It is politically stable, does not suffer from internal war, few of its citizens would ever consider owning a gun, and it has a high standard of living. But that also means that also means travelling costs are much higher than South-east Asia, and more similar to North America and Europe (and in some ways even more expensive). You can go on tours (see below), but if you have time, and you are interested in nature, you are probably better heading out on your own. Cars can be hired from all the major centres. There are loads of places to visit, and many of these places are ideal for experiencing nature and/or wildlife watching.

where to go in Australia to experience nature and watch wildlife...

The biggest city in Australia is Sydney. It is not the political capital, but it is the most scenic and visited city on the continent. But even in Sydney there is nature and wildlife to be seen.

Drive up the east coast for 2 or 3 days and you will end up in the tropics. On the way is the beautiful subtropical rainforest, including the famous O'Reillys Lodge for birdwatching. For most of my adult life in Australia, I was based in the tropical north-east because this is where the biological diversity is the highest on the continent. The centre of this region is Cairns. The Cairns esplanade is famous for its muflats and bird-watching opportunities. In the leafy suburbs of Cairns are various natural places to explore, such as the Mt.Whitfield, the Lakes, and the Cairns Botanical Gardens. There are a number of wildlife parks and zoos in Cairns and the surrounding area, including the excellent Rainforest Habitat, Kuranda Butterfly Sanctuary, Hartleys, and Cairns Tropical Zoo.

In the waters alongside the tropical east coast is of course the Great Barrier Reef, the largest reef system in the world. There are many places to experience the coral reefs and tropical islands to explore. One of my favourite areas are the Ribbon Reefs. The Whitsundays is one of the more popular spots, with white sand beaches and blue green water, which you can explore by self-sailing, or even cheaper tours you can join as a group. However, the coral gets better the further you go north, and the reef is located closer to the coast. North of Cairns is one of the most famous places, called Lizard Island. A less expensive option with great wildlife is just off Cairns, combining coral reefs and hundreds of nesting seabirds; an island called Michaelmas Cay.

Up in the Atherton Tablelands there are many excellent places to experience the rainforest and watch birds & other wildlife, such as the Fig Trees (Cathedral Fig and Curtain Fig) and Crater Lakes (Lake Eacham and Lake Barrine). As is the case with many rainforest areas around the world, some of the best wildlife experiences are around lodges; my two favourites being Chambers Lodge and Possum Valley. There are heaps of other birdwatching and nature lodges, including the Atherton Tablelands Birdwatching Lodge.

Further north of Cairns is Port Douglas, Mossman and the Daintree region. Across the Daintree River, there is an interpretative centre called the Daintree Discovery Centre. If you haven't got time to go off exploring and can only do day trips from Cairns, you can still get a taste of the Daintree and the Atherton tableands. There are plenty of day tour options...

At the other end of the country is Tasmania. Due to this isolation of this island state, and the lack of the introduced wolf (the dingo), there is still a high diversity and abundance of native mammals to be seen. There are also great walking trails, flowers in spring, and many birds, including a dozen endemic species which are relatively easy to find. Great places to visit are the Tasmanian Devil conservation park, Bruny Island, Maria Island, Flinders Island, Narawntapu National Park, and Wineglass Bay.

Away from the mainland, and geographically part of New Zealand, but politically belonging to Tasmania, is Macquarie Island. This is well into the subantarctic region, and is thus home to thousands and thousands of sea birds, including albatross and penguins, as well as elephant seals.

The largest state (by far) in Australia is West Australia (WA). It extends from the tropics in the north, with coral reefs, savanna woodland and monsoon rainforest, across arid environments, and down south to rich flowering grasslands and tall Eucalyptus woodlands and southern ocean coastlines. My main work is in the tropical north-west. The main settlement here is Broome. There are other smaller towns such as Wyndham. Just inland from here is a great and easy birdwatching at Wyndham Caravan Park.

Most winters I work on ships for a few months along the Kimberley coast, a spectacular area of stark geological beauty and remote beaches. Within the Kimberley there are sites such as Montgomery Reef and Prince Frederick Harbour, Talbot Bay, and the Horizontal Falls. Just off the coast is the bird breeding islands of the Lacepedes. As you travel further south through the state of Western Australia, there is the world heritage and easily accessible Ningaloo Reef.