The incredible endemic passerine songbirds birds of the rainforests of Australia and New Guinea and surrounding islands...

The approximately 19 species of bowerbirds and catbirds are restricted to Australia and New Guinea. They are primarily rainforest birds, although a number of spe- cies have adapted to live in the drier tropi- cal and central woodlands and grasslands of Australia and southern New Guinea. Bowerbirds are so named because of the bowers that the males build for courtship. The males display near their structure to attract females. Their calls are usually quite distinct, with strange, often mechanical sounding clicking, buzzing and chirp- ing. The males are usually more colourful compared with the duller females. The juvenile males are also dull, and may take years to gain their full plumage.

The bowers themselves include a range of structures, from poles to avenues to simple cleared stages. Many are also decorated by collected objects, some species of bowerbirds favouring particular colours. Objects may be natural, such as leaves, flowers, berries, or unnatural, including balloons, pens, string, straws or condom wrappers. 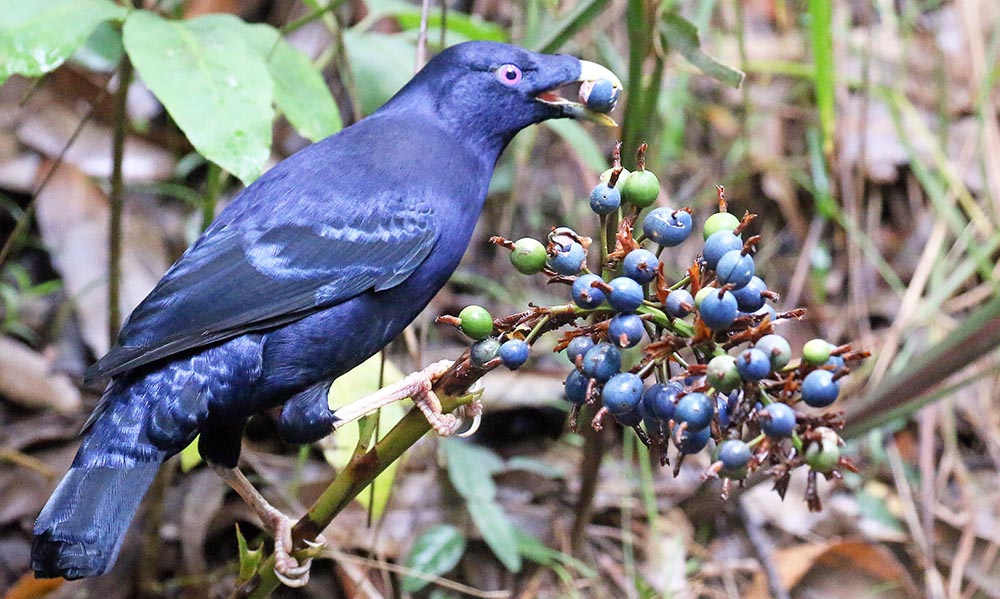 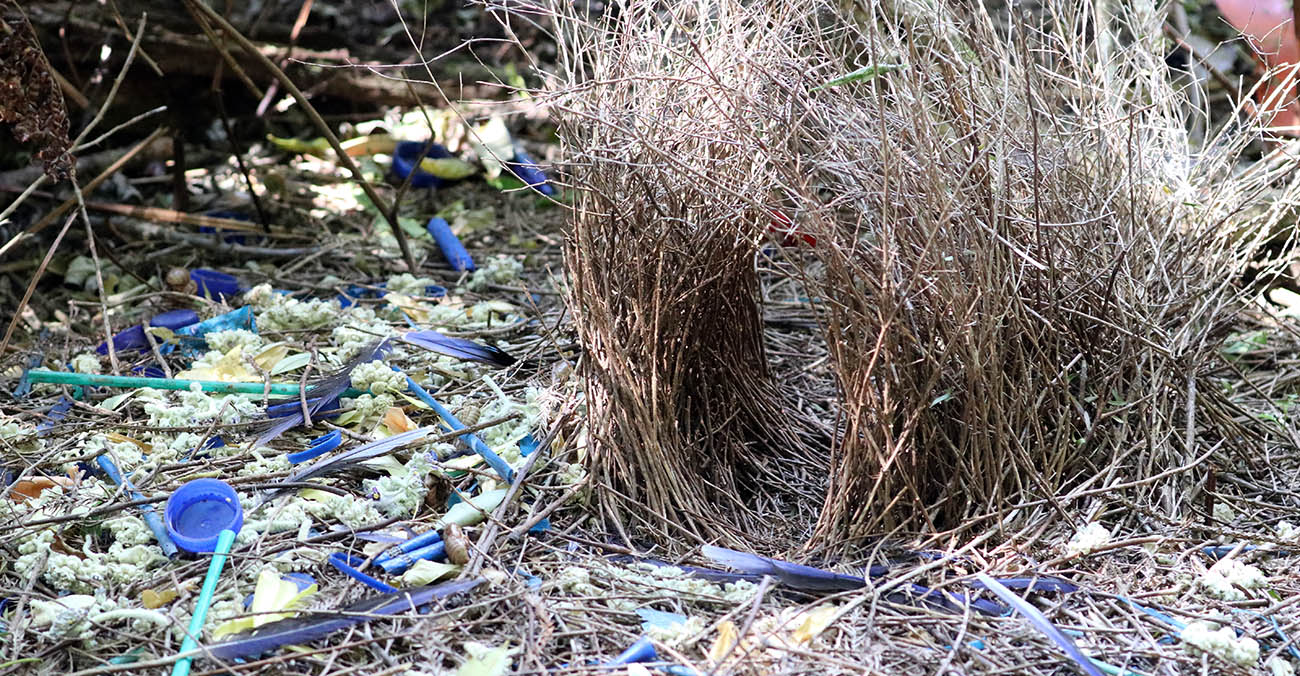 The bower of the Satin Bowerbird. Do you think his favourite colour is blue?

These catbirds are not related to the American ‘Gray Catbird’, which is in the same family as the mockingbirds. However, like that bird, they are named for their cat-like calls. They live in the same patch of forest year after year, and these loud wailing calls are for establishing this territory. Catbirds are coloured a very pretty bright leaf green on the upperparts, and have scaled breasts. They have thick, short bills and feed mainly on fruit in their rainforest habitat. Even though they are in the bowerbird family, they are not known to build bowers, and have only been recorded to occasionally pluck leaves and place them in a clearing (Schodde and Tidemann 1990). Unlike the showy bowerbirds, the catbirds form monogamous pairs. There are 2 species found in Australia, and they do not overlap in distribution.

This large and relatively recently revised family includes many different types of birds. In the Australian tropical rainforest they are represented by such groups as scrubwrens, and gerygones. These constitute many of the small and initially indistinct birds of the forest, also known colloquially as ‘little brown jobs’. However, a bit of patience and closer inspection reveals many of the species to be quite attractive.

This group constitutes some of the smaller but still attractive birds of the rainforests along the east coast. They mostly have fairly dull plumage, but may have some distinct facial markings. They busily feed on insects and seeds, bouncing around the forest floor and in the first few metres of the vegetation. There are 6 species found in Australia, and all but 1 of those could be seen in the rainforest of the north-east. The best locations to see these small birds are in high altitude rainforest, such as Possum Valley in the Atherton Tablelands, or in subtropical rainforest, such as O’Reillys in Lamington.

The honeyeaters make up Australia’s biggest family of birds, and subsequently there are many species found in the Australasian tropical rainforest. Honeyeaters are, as the name suggests, nectar feeders, and thus vital pollinators for many Australian plants. They are in many ways the ecological equivalent of the African/ Asian Sunbirds and the American Hummingbirds. However, most honeyeaters are much bigger than the overseas nectar feeders, and most are not delicate enough to hover.

Many of the physical features of honeyeaters are reflections of their nectar feeding lifestyle. Most have a bill that is curved to some extent, with the bill shape largely reflects the types of flowers they are visiting. Generalizations of lifestyle and behaviour are hard to make with such a large and diverse family. Like many hummingbirds, honeyeaters can be territorial, often chasing others away from their nectar or insect source. Breeding seasons are extremely varied, reflecting the different times of nectar production in different plants. 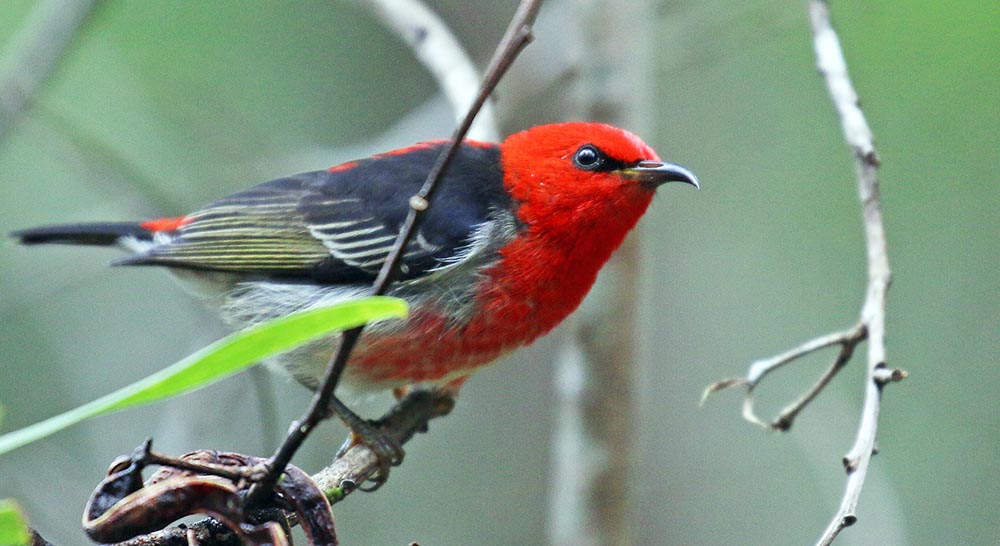 Myzomela sanguinolenta, 'Scarlet Honeyeater'. Stunning and unmistakeable. Male has bright red head and chest and black wings. Female and juveniles dull brown. Often found near blossoms of equally bright red Banksia and Callistemon. Found in various habitats, including rainforest along east coast of Australia, and into tropical Asia and islands of tropical Pacific. Can be seen in gardens at Lake Barrine. 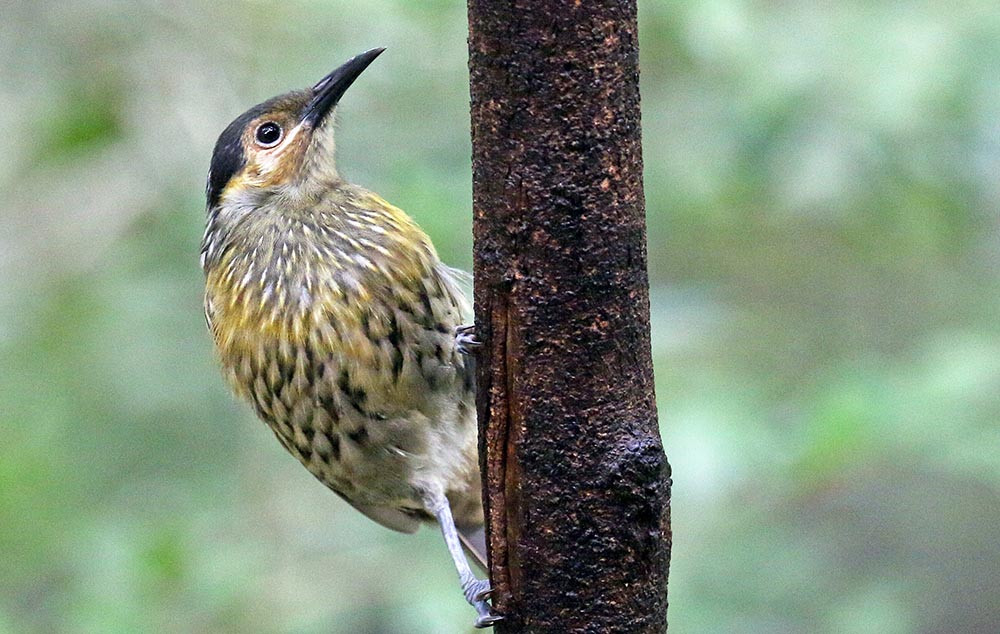 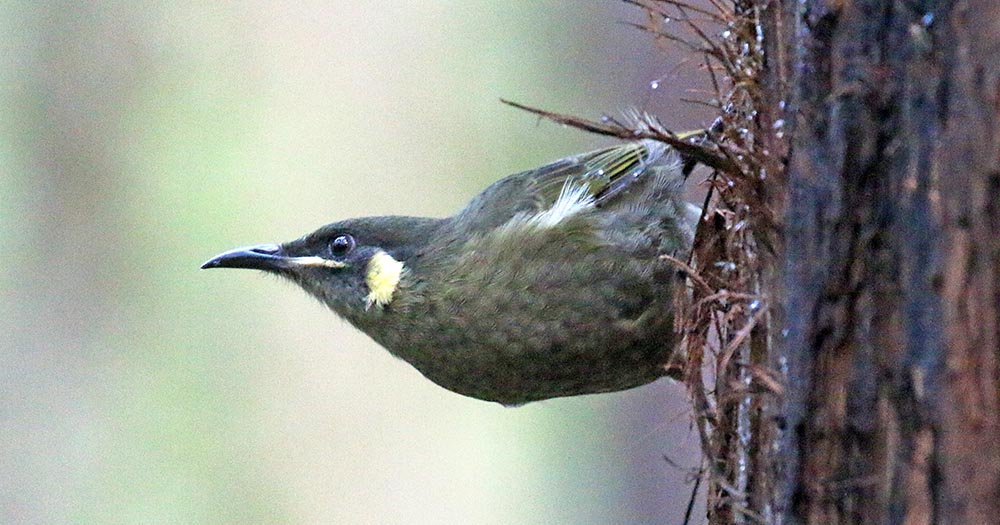 Meliphaga lewinii, 'Lewin's Honeyeater'. One of most common and diagnostic birds of subtropical and upland rainforests. Call is familiar and distinctive; fast ‘machine gun’-like series of whistles. Close up, tends to be slightly chubbier than other Meliphaga, and yellow patch usually fuller and more of a half moon. Will hang around picnic tables for hand-outs and in lodges in forest will often even come in and steal food. Can be aggressive to other birds. Common in rainforests along east coast of Australia, as well as gardens. In tropical north-east, is usually found at higher altitudes. 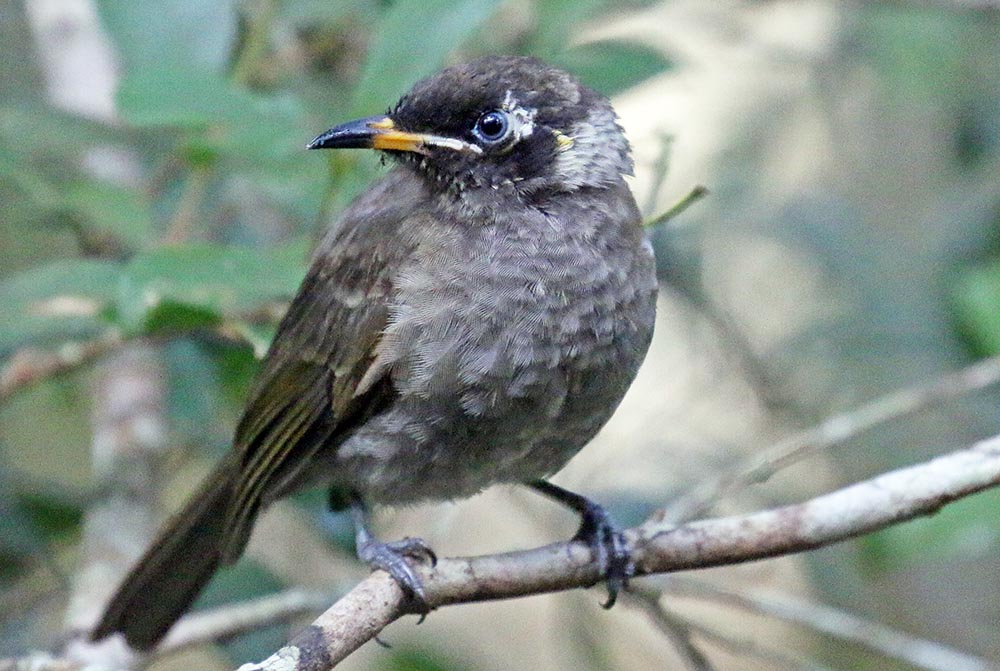 Bolemoreus frenatus, 'Bridled Honeyeater'. Brown honeyeater with distinctive ‘bridle’ made up of yellow and black beak, white line to blue eyes, with white markings behind. Endemic to North Queensland, where usually found in higher altitude rainforests, thus once referred to as ‘Mountain Honeyeater’. May scavenge around picnic areas, eg; car-park of Hypipamee Crater. There are also wintering populations in some coastal mangroves, such as at Marrdja boardwalk, where their antics and loud, rattling whistles can sometimes make bird very obvious. 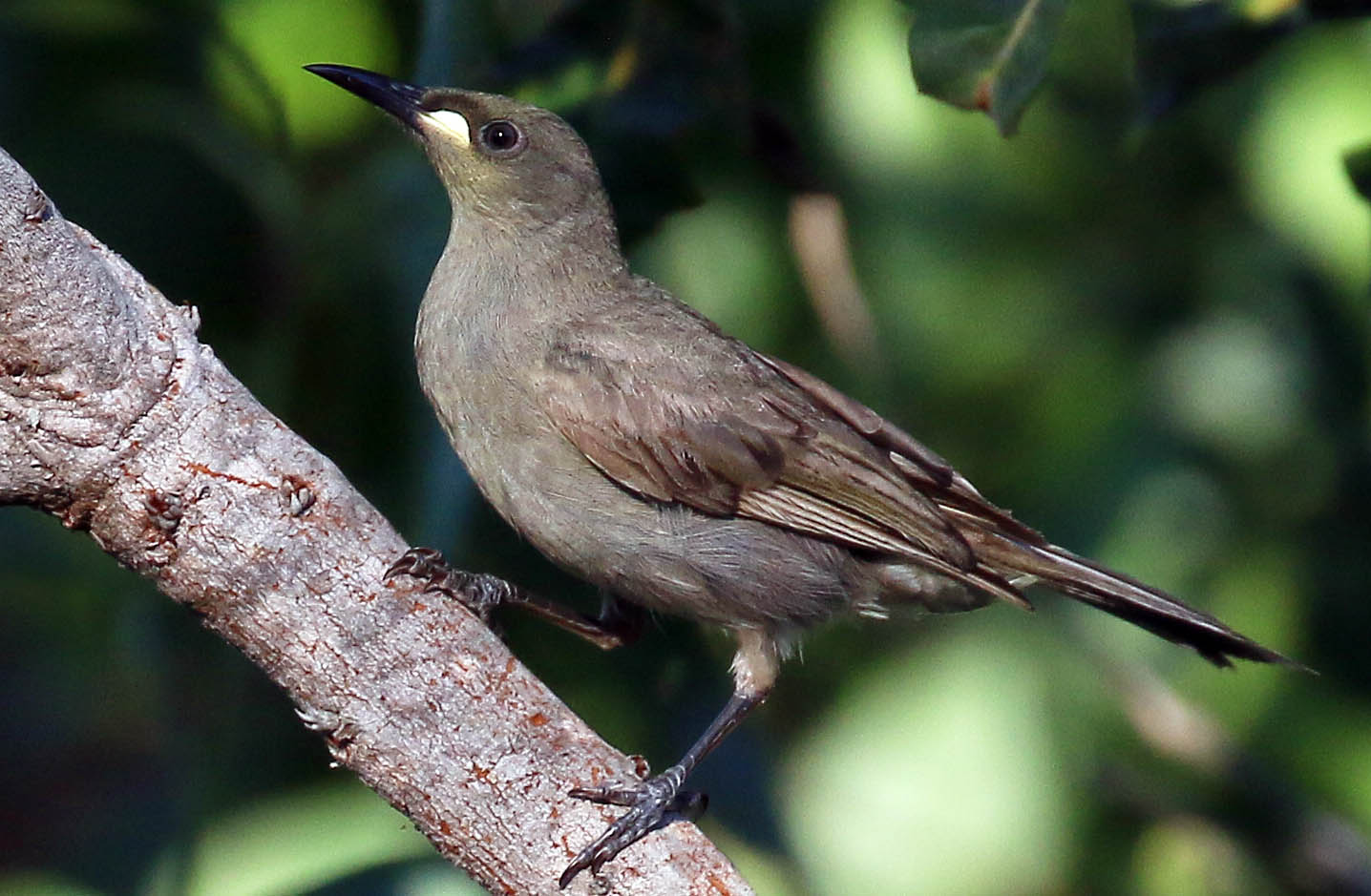 Stomiopera unicolor, 'White-gaped Honeyeater'. Found in various habitats across northern Australia where there is freshwater, including monsoon forest, woodlands, and urban areas around Darwin.

Orthonyx temminckii, 'Australian Logrunner'. Female has an orange breast. Small and cute bird that props back with it's tail then flicks through the rainforest floor leaves with it's feet out at an angle.

This small family is endemic to Australia and New Guinea.

'Eastern Whipbird'. Dark green back, black head with white throat, Juveniles are duller. The call is an incredible 'whip-crack' by the male, answered with an antiphonal "tchew-tchew" by the female. Found in rainforests, more so at higher altitudes.

Sphecotheres vieilloti, 'Australasian Figbird'. The northern forms are bright yellow with a paler red mask (higher image above) , while the southern form is greener, but with a deep red mask (lower image above). They eat mostly fruit, and as suggested by their common name, they are indeed often  seen in fig trees. They are common in monsoon, tropical and sub-tropical rainforest, and the edges, including gardens, in eastern Australia and New Guinea.

Figbird females and juveniles are plainer, with streaks.

Rhipidura rufifrons, 'Rufous Fantail'. Widespread in various habitats including rainforest, along eastern Australia, across northern Australia, north into New Guinea and some islands of Indonesia.

Sometimes shortened to "BOP's" - although don't get that confused with the other BOP - Bird Of Prey. 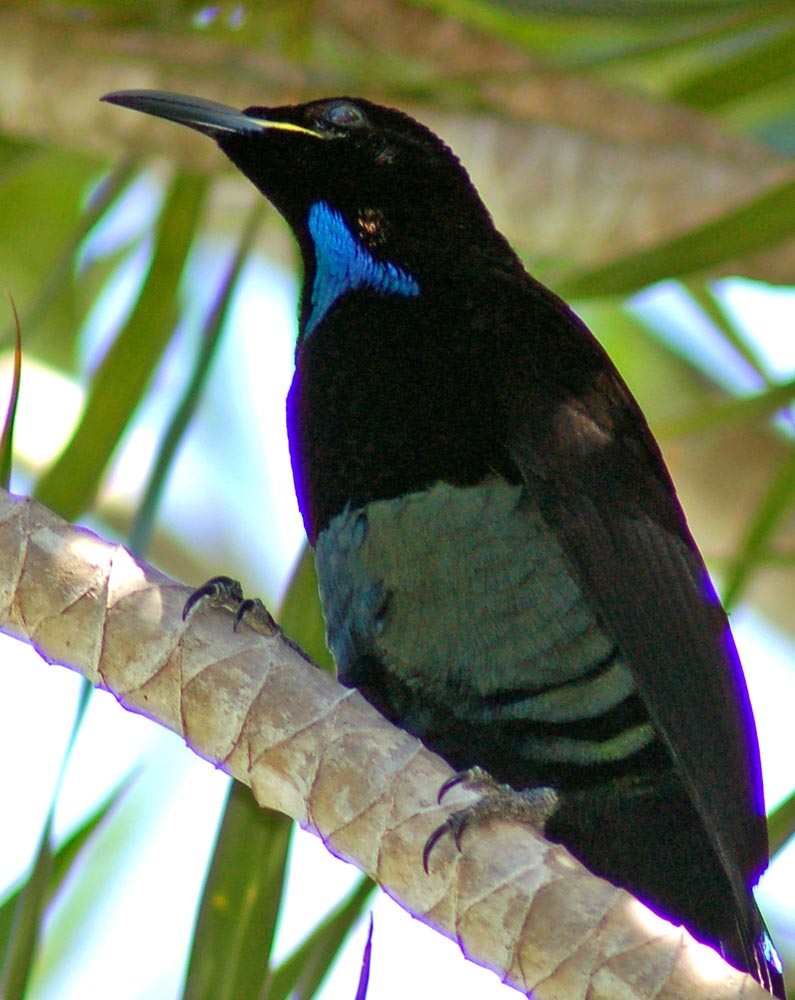 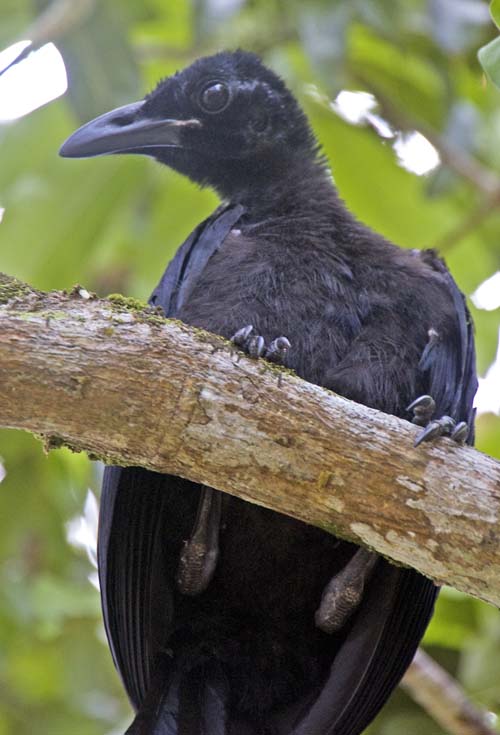 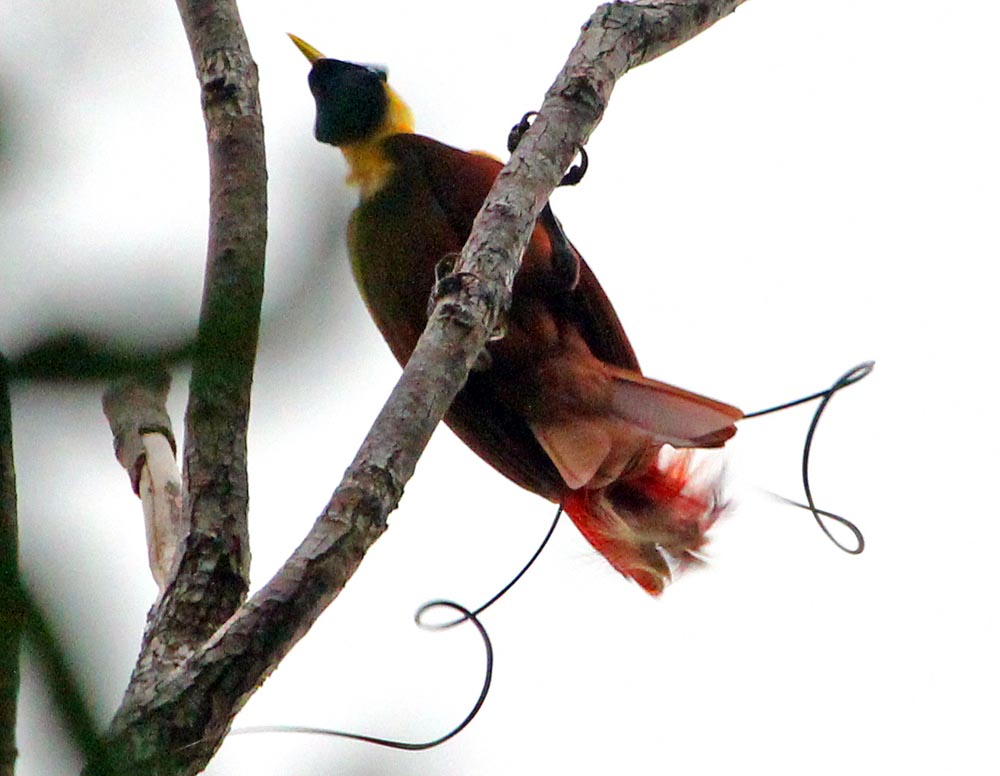 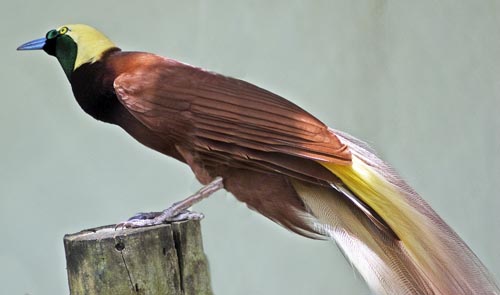 Myiagra ruficollis, 'Broad-billed Flycatcher'. Similar to other Myiagra flycatchers, but a view from a low angle will reveal the much wider bill. Found in rainforest and mangroves in tropical Australia, New Guinea, and southern Indonesia.

This video is a guided walk for forest floor birds in subtropical rainforest, Lamington NP.