Geckos are a family of mainly nocturnal lizards. They usually have slim bodies with long limbs, and often have fat or strangely shaped tails. Their skin appears rather soft, and includes a range of colours, from cryptic green and browns to striking bands. They usually have a flattened round head with a distinct snout. Their most distinctive features are the large, lidless eyes which do not blink, but are licked clean by the tongue. Another feature is their ability to make noises, although most of the native species are quiet. In Australia, there are over 110 species. They seem to be more of the drier habitats, and are surprisingly less diverse in the tropical rainforest. They are also rarely seen in this habitat, with the most commonly seen gecko in rainforest lodges being an introduced species.

Saltuarius cornutus, ‘Northern Leaf Tailed Gecko’. Large gecko with leaf shaped tail, lichen-like camouflage skin. Eyeshine may give it away when spotlighting rainforest. Usually pressed on tree trunk high up in canopy, often head pointed down and slightly away from tree, but if disturbed flattens out against trunk to reduce shadow. Only found in rainforests of North Queensland. Best seen at the giant Fig Trees and Hypipamee Crater in Atherton Tablelands.

This genus has only 1 species, which is endemic to Australia. 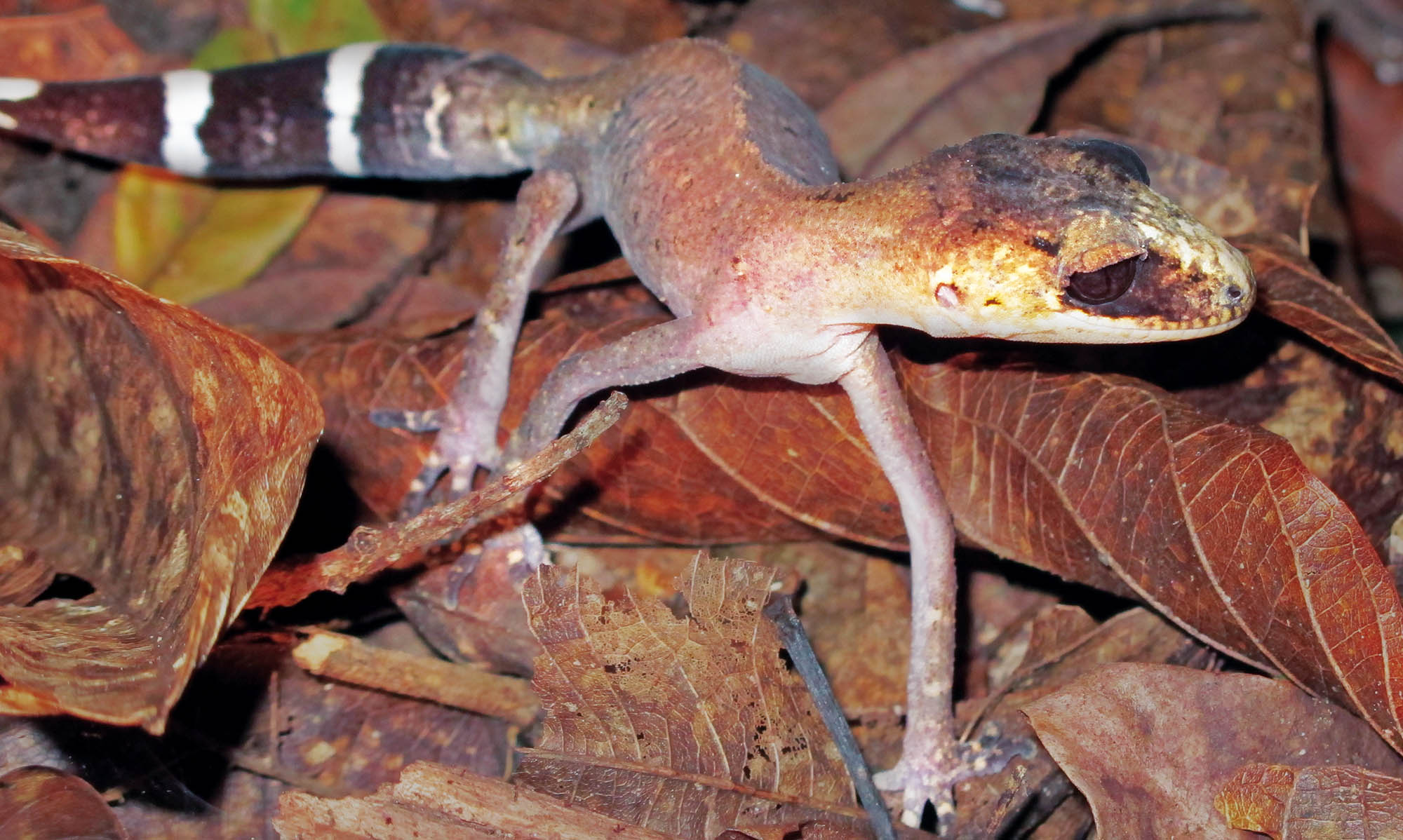 Carphodactylus laevis, ‘Chameleon Gecko’. Relatively slender body, laterally compressed, long limbs, huge black eyes with ‘black eye’ smudge on snout. Carrot shaped tail; if the animal still has original tail, then it has several bold white stripes. Wilson and Swan report the unique ability of this species to discard the tail, which then wriggles around and makes squeaking noises! May be seen on ground at night in tropical rainforest. Found only in North Queensland.

Dragons are found from Europe, to Africa, Asia, Australia, and the south Pacific. There are some 70 species in Australia, but, like the geckos, they are more common in drier habitats and relatively less diverse in the Australian rainforest. Most dragons have large angular heads, sometimes with flaps, spines or frills. They have long bodies, strong hind legs and long toes, and very long tails. They generally have an upright posture and some species can run quickly on their hindlegs when alarmed.

Intelligama lesueurii, 'Eastern (Australian) Water Dragon'. Found in forests, particularly along river, in eastern Australia. If alarmed, they jump into water and swim away; they can rest on the bottom underwater for up to a hour and a half. They are also becoming common in suburbs of northern NSW and south-east Queensland, where they end up in people's pools and backyard ponds. 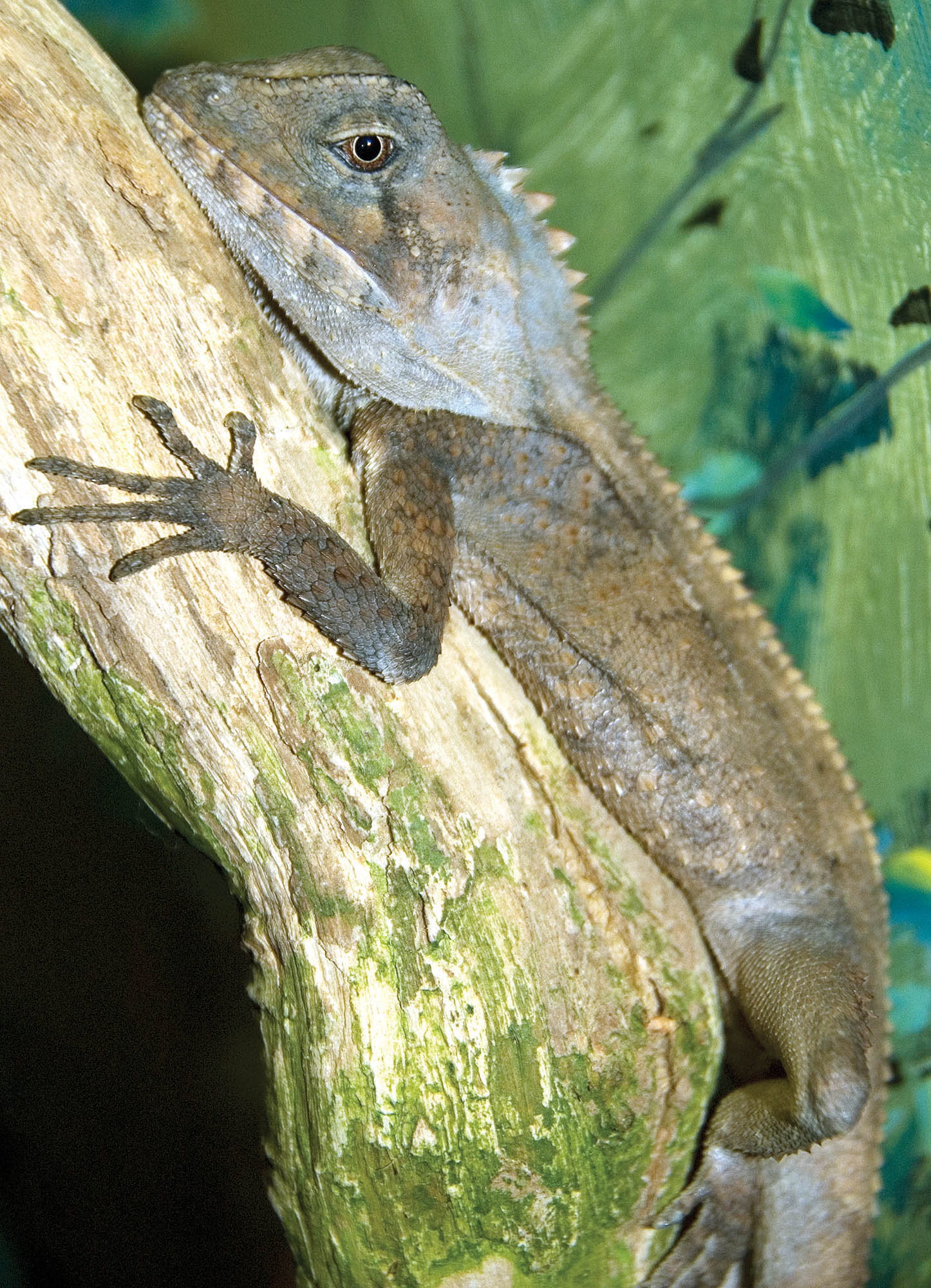 This genus is centred in the rainforests of New Guinea, with 2 species also found in the rainforests in eastern Australia. They are medium to large lizards with long legs and head crests. Their eyes are large compared to other open habitat dragons of Australia perhaps due to the low light levels of their rainforest understorey habitat. They are difficult to spot as they perch very still in the first few metres of a rainforest trunk. From here they watch for prey and avoid detection by predators; if spotted, they will slowly edge around the other side of the trunk. 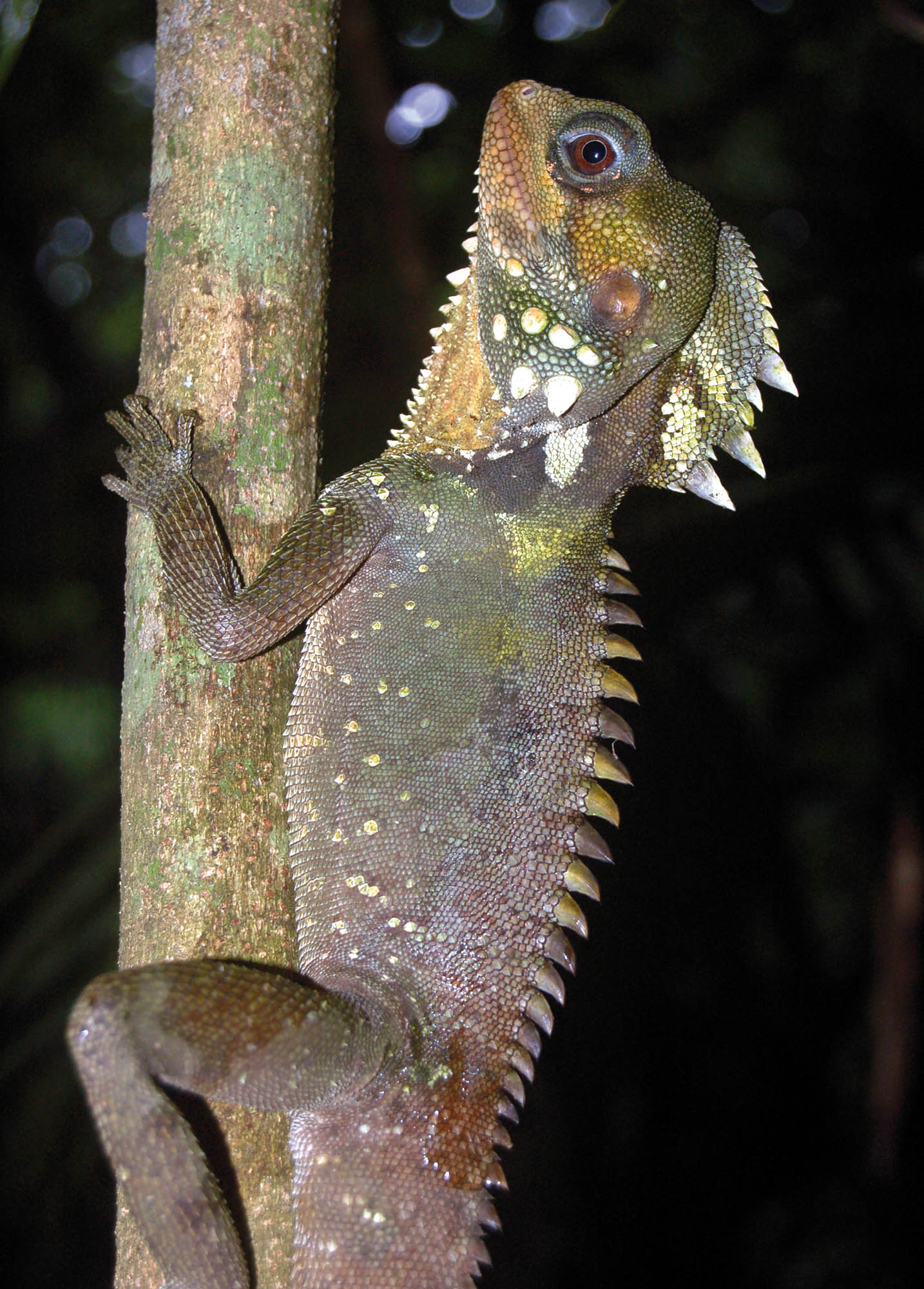 Hypsilurus boydii Boyd’s ‘Forest Dragon’. Striking lizard. About 15 cm long, not including the long tail. Large head and large eyes. Spines along back, and throat. Has white ‘stones’ embedded on the cheeks. Only found in tropical rainforest in north-east Queensland. Can sometimes be seen on walking tracks at Mossman Gorge, Lake Barrine. 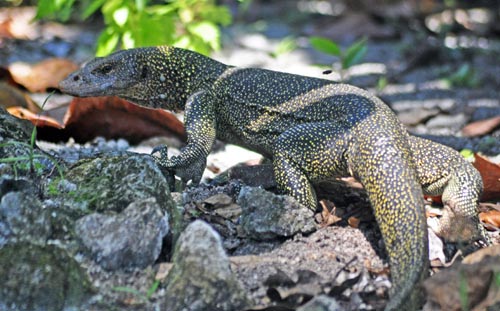 Varanus indica, 'Mangrove Monitor', Western Pacific Monitor Lizard'. Large distribution from Australia, New Guinea, Solomon Islands, up to Micronesia. They may have been able to disperse this far due to their salt-excreting nasal glands, which only one other monitor has.

There is only 1 species in this genus.

Gnypetoscincus queenslandiae, ‘Prickly Forest Skink’ is endemic to north-east Queensland, where it is restricted to the tropical rainforest. This unusual lizard has points to the scales along the back and thus appears ‘prickly’. It is rarely seen as it is reported to feed on invertebrates inside rotting logs. 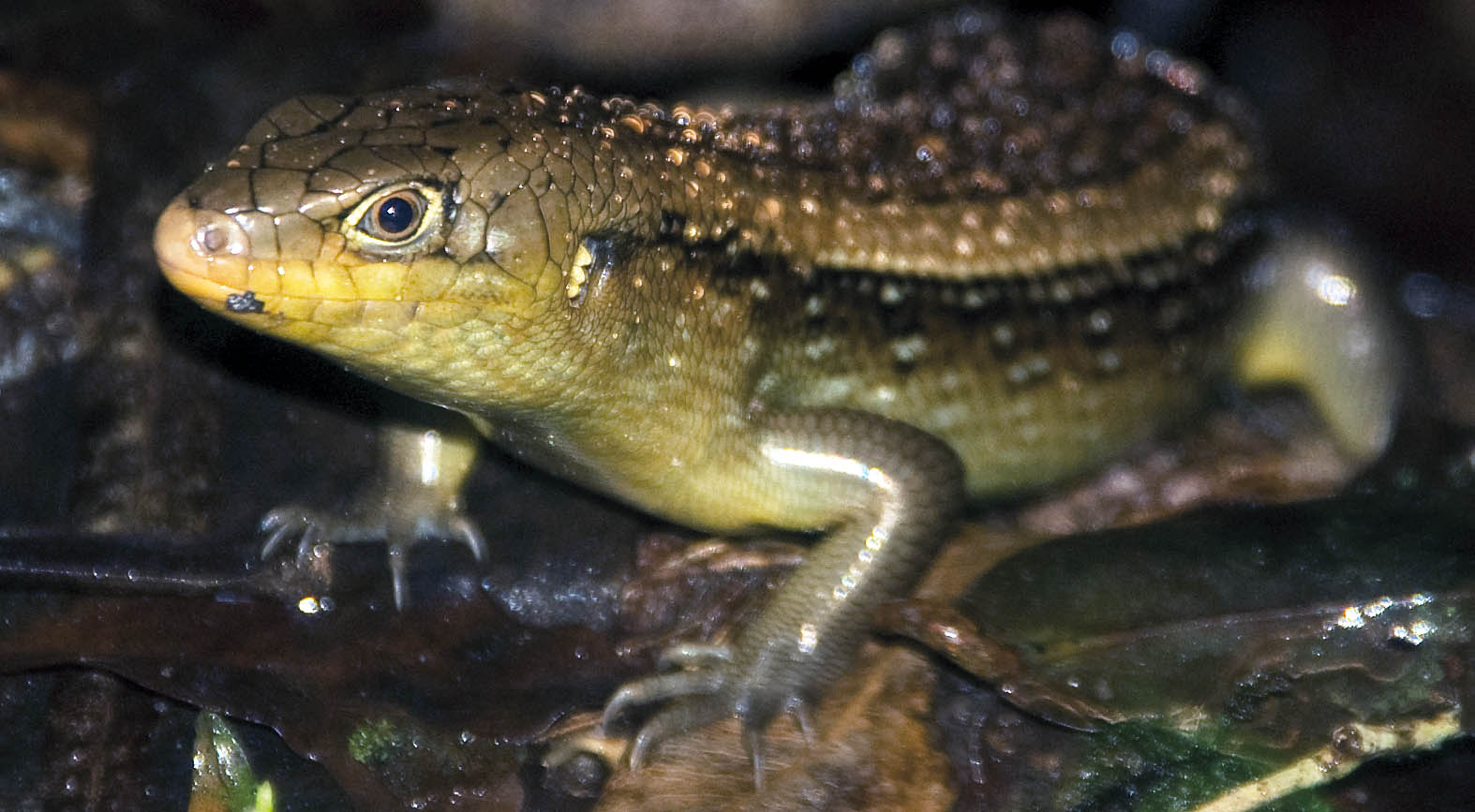 This genus has 30 species in Australia and includes some of the larger, more robust skinks. The main species found in the Australian tropical rainforest is the large and fat Egernia frerei ‘Major Skink’, sometimes seen near logs by the path at Mossman Gorge, but probably best seen on Fitzroy Island, and which also occurs in southern New Guinea. 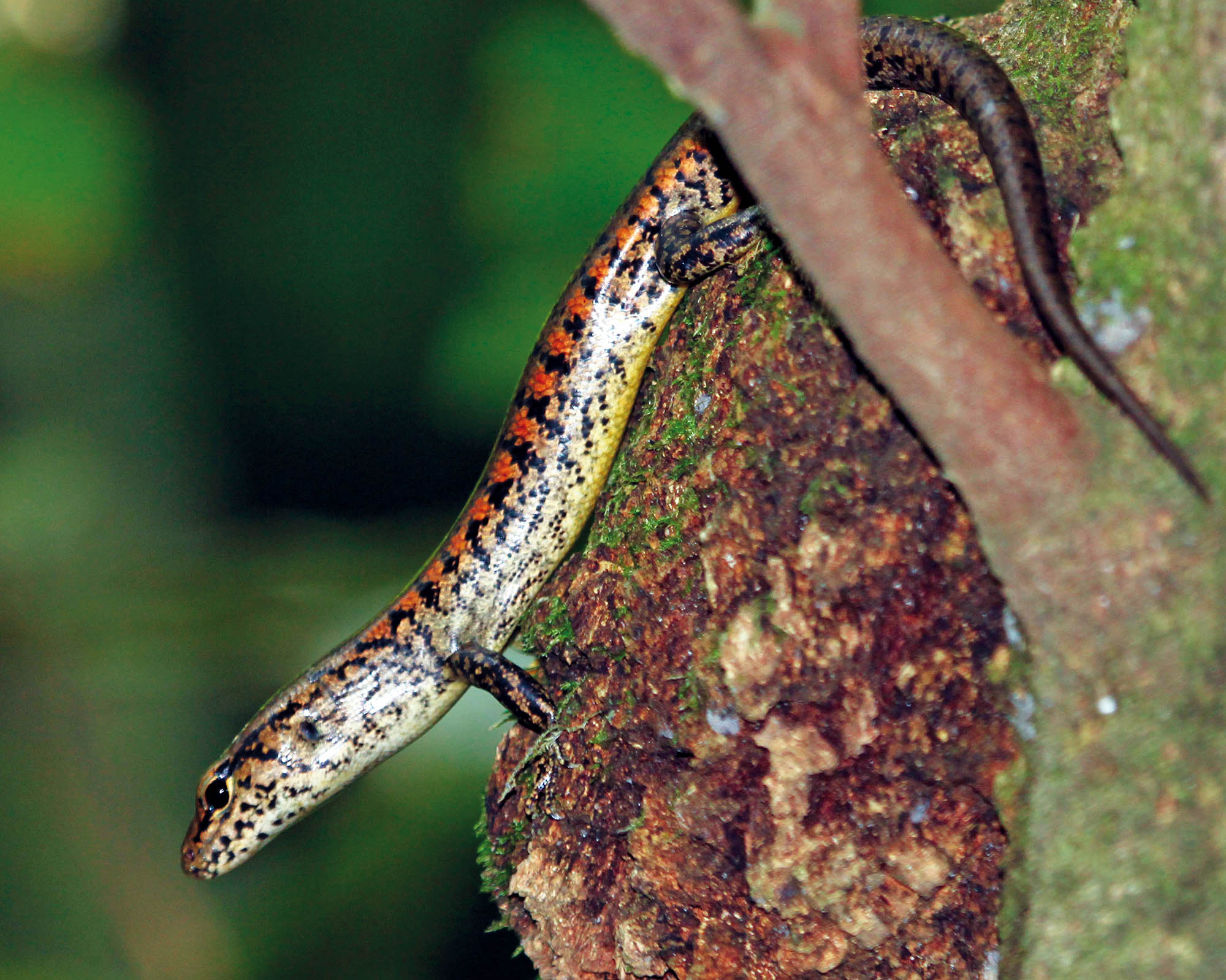 A group of about 15 medium-sized species found in wetter habitats along the east cost of Australia. They tend to have copper or even golden backs, with black and white flecks or bars along the sides