The monotremes only occur only in Australia and New Guinea. There are just 5 or so species; several types of echidna, and 1 species of platypus. The oldest remains of a monotreme have been found in South America, so they have occurred, and perhaps even evolved, outside of the Australasian region. Both types of monotremes generally feed on invertebrates, and they can detect the electromagnetic impulses of their prey with their sensitive bills. Both the echidnas and the platypus lack real, developed teeth, and instead have horny pads in between which they grind their food. The males of monotremes develop spurs on the back leg, and in the platypus this becomes venomous in the breeding season. Monotremes are most famously distinguished from the other mammals by the fact that they lay eggs. Young are poorly developed after hatching and at a certain age are left behind in the burrow. These young monotremes are called ‘puggles’.

This family currently only contains the 1 species, the Platypus. When reported to European scientists, they were thought to be a hoax, because they combined the fur of mammal, but the bill and webbed feet of a duck.

Ornithorynchus anatinus, 'Platypus'. They are one of the most unusual and famous of all animals. They are basically a solitary animal, however, some may be seen in the same stretch of river where boundaries overlap, especially of more tolerant females. They live in a burrow dug into bank, often amongst tree roots, with a very tiny entrance just above the water line. They spend much of their time foraging underwater for food. They have a layer of stiff guard hairs so that even after immersion the undercoat can remain relatively dry. They hold their breath for minute or so at a time to gather aquatic invertebrates, such as crustaceans, and the occasional smaller frog or fish. The eyes are actually closed as they nuzzle around in bottom sediment with a bill that is sensitive to electromagnetic impulses sent out by prey. When enough food is in the cheek pouches, they rise to the surface to grind their catch between the hard pads, (rather than teeth), that are located in their jaws. Found in freshwater creeks, especially at higher altitude or in cooler areas, in eastern Australia south to Tasmania.

The rest of the mammals, the live-bearers.

The earliest fossil evidence suggests (to the horror of most Australians), that marsupials originally evolved somewhere is what is now North America. They have long been extinct from that continent, but have recently re-invaded from South America, after the two American continents connected several million years ago. Marsupials have long inhabited the ‘Neotropics’ of South and Central America, where there are almost 100 species of ‘American Opossums’ and ‘Shrew Opossums’. However, it is in the long isolated Australasian land mass where marsupials have, in the absence of other placental mammals, radiated into such a diverse range of forms. 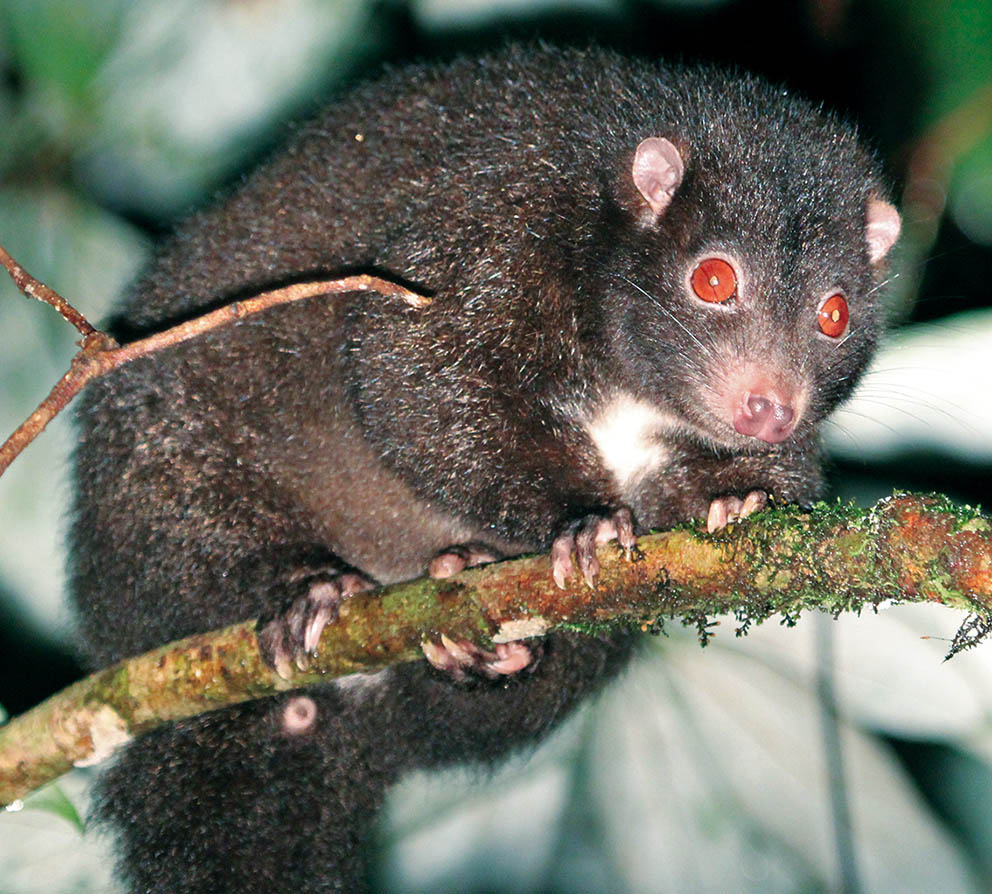 The name ‘possum’ is a fairly vague and not very scientific term. Other than both being marsupials, the Australian/New Guinea ‘Possums’ are not closely related to the American/Neotropical ‘Opossums’. And in fact, within Australia, the term ‘Possum’ actually covers a few quite different families of animals. There are three main groups: the gliders, the ringtails, and the brushtails.

There are a few characteristics that unite the different Australasian possums, although these are often consequences of ecology than a reflection of relatedness. All possums are quite arboreal, and many have a strong, usually furry tail with a naked patch of skin underneath which assists with grip. Many species have also evolved feet that are effective grippers of branch- es by having a larger, single opposable digit. All species are mainly active at night, thus their senses of smell and hearing are highly evolved. Many species have scent glands, and individuals may be capable of recognizing different characteristics, such as sex and age of another individual, by scent alone. Many species have large ears and react to seemingly small sounds in the forest. Their sight is sensitive to light, and all species have eyeshine from flashlight reflection. Different species have different degree and colour of eyeshine, and in fact this aids in identifying different species in the Australian tropical rainforest. The endemic possums of the Australian rainforest are one of the regions highlights, however they are difficult animals to spot, and one has to go to specific places at higher altitudes at night to see them.

This family includes the brushtail possums, the various types of cuscus and the Scaly- tailed possums, with a total of some 24 species. They are in fact the most widespread of all Australasian marsupial families, from brushtails in Tasmania, to cuscus in the northern Sulawesi Islands, Indonesia.

The ‘cuscus’ are comprised of 2 genera of possums. They usually have much smaller ears than their brushtail relatives. They are found mainly in New Guinea, but several species also live in the surrounding islands of the south-west Pacific, and there are 2 species found in the forests of the Cape York region of Australia. 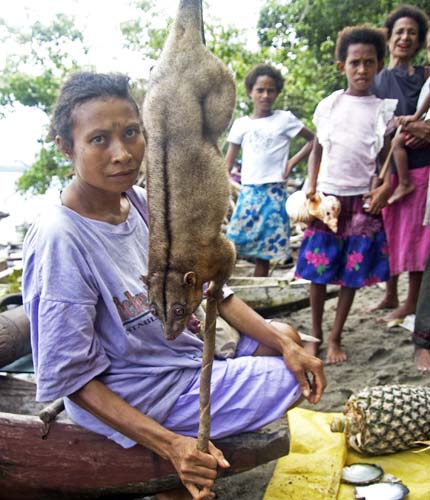 Brushtail Possums are generally the only type of possum likely to be seen on the ground, where they may take handouts from people and scavenge around human habitations. The ‘Brushtails’ are probably the most vocal of the generally quiet marsupials, and their large fox-like ears reflect how important vocal communication is. They are found in a wide variety of habitats throughout much of Australia, including the tropical rainforest. 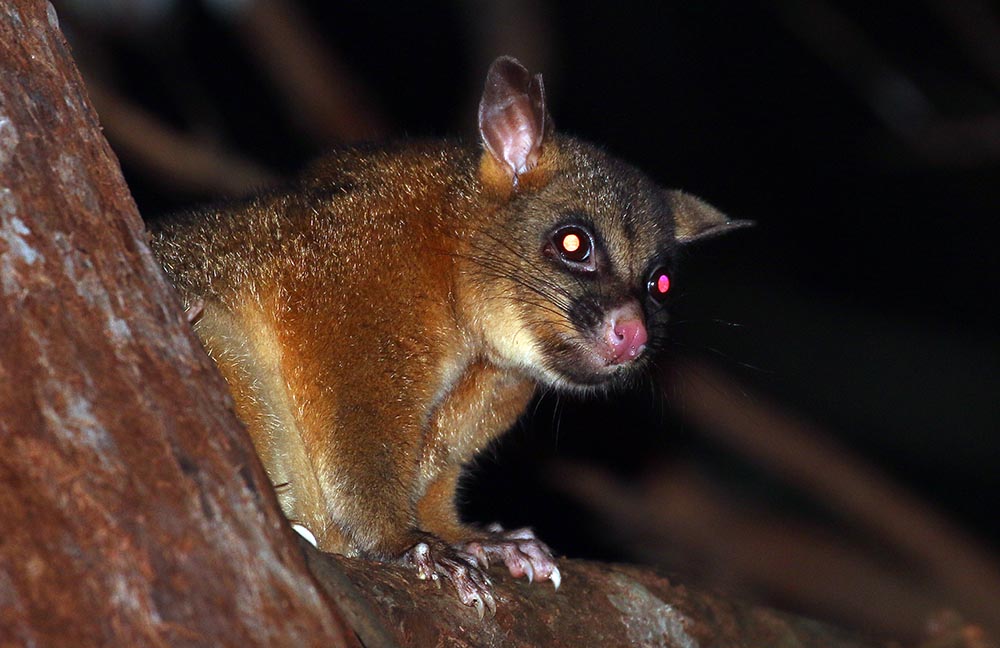 Trichosurus johnstoni, 'Coppery Brushtail Possum'. Very vocal. Tail is quite prehensile. Rather large, solidly built possum with dark furry tail. Colour of fur a ‘coppery’ rainforest form. Like many other possums of Australian tropical rainforest, is generally found at higher altitudes, such as in Atherton Tablelands. Can usually be seen when spotlighting at Hypipamee Crater, often even around carpark.

These gliders are referred to as the ‘wrist–winged gliders’, as most have a loose flap of skin between the wrist and ankle on the same side. This appears as a loose fold of skin when climbing, but when jumping from tree to tree the skin is stretched and acts as a gliding surface. They have been reported to glide up to 100 meters, although in the thicker tropical rainforest these glides are usually more like short jumps, the gliding itself is rather difficult to detect at such speed. Being nocturnal, their sense of small is important. Gliders use their sharp lower incisors to chew into trees and then lick the resulting sap and gum. There are 2 species found in tropical rainforest. Both are small, active, and hard to spot. 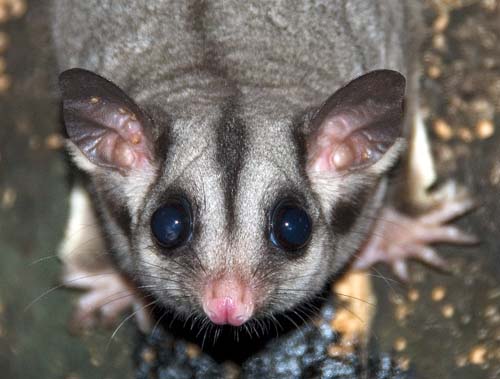 Petaurus breviceps, 'Sugar Glider'. Not often seen, but can be common if enough tree hollows for them. Occasionally heard; call is a high pitched, even, fast ‘yip- yip-yip....”, which serves as alarm call, indicating potential predator in area, such as cat or owl. Most live in small family groups, especially when cold, huddle together to stay warm. Younger members of group usually evicted before 12 months, and subsequently there is high rate of mortality for young gliders. As with other gliders, scent and smell are important in social interactions. Widespread, being found in range of habitats, including rainforest, in the south east, along the east coast and throughout the top end of Australia and into New Guinea. In the tropical rainforest of north Queensland, best seen at Chambers Rainforest Apartments.

This family includes at least 15 species in a range of genera. They are found in New Guinea, Australia, and some surrounding islands, with 7 species in Australia. They are not generally quite as wide ranging in their diet as other possums, such as the gliders and brushtails. They may feed on fruits and flowers, but generally the bulk of their diet is leaves. This results in ‘ringtails’ being more sluggish and appearing rather ‘dopey’, although many are capable of energetic leaps within the canopy. However, they are excellent climbers with strongly prehensile tails. They are also usually quieter than many other possums; their less reliance on vocalization in communication is reflected in their smaller ears. Ringtails are found in a variety of habitats in Australasia and surrounding islands, although they have a tendency to be more of a closed forest possum than the ‘gliding possums’ and the occasionally terrestrial ‘brushtails’. They have speciated most in the higher altitude rainforest of New Guinea and north-east Queensland.

The species in this genus are found mainly in New Guinea and surrounding islands. There are 2 species found in Australia.

Pseudochirulus herbertensis, 'Herbert River Ringtail'. One of most beautiful Australian possums, coloured dark brown on top and cream on underparts, giving appearance of almost black and white ‘panda’. Symbol of Queensland National Parks and Wildlife Service, although most Queenslanders would not have seen, (or even heard) of this species. Restricted to high altitude tropical rainforest in North Queensland. Around higher altitude rainforest in Daintree region is much plainer Pseudochirulus cinereus ‘Daintree Ringtail Possum’ (whioch I have not photographed).

This genus only contains 1 species. It is restricted to the higher altitude rainforest of North-east Queensland. 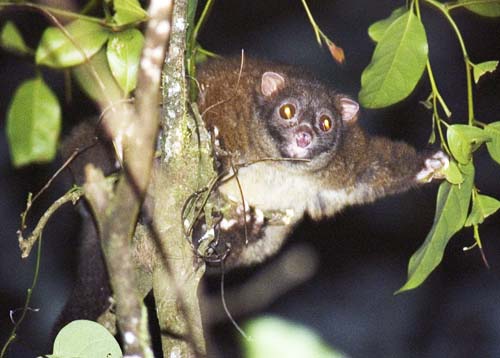 Hemibelideus lemuroides, 'Lemuroid Ringtail Possum'. Usually a fairly dark possum with little in the way of distinguishing colours or markings, being greyish brown with thick, furry tail. Most distinctive feature is probably the bright yellow eye-shine. Only rainforest possum of size regularly found in groups. Restricted to upland tropical rainforest in north-east Queensland, where they often seen very high up in canopy. In right habitat, can be locally common.

This genus contains 4 species found in New Guinea, and 1 species restricted to Australia. 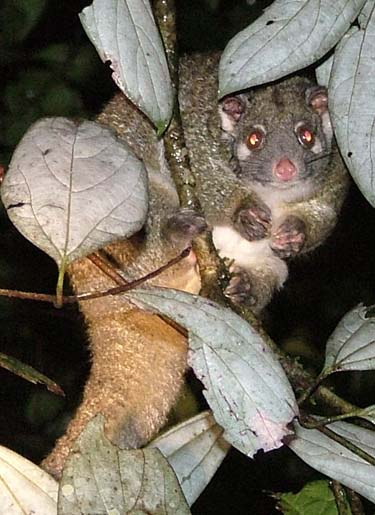 Pseudochirops archeri, 'Green Ringtail Possum'. One of few naturally green furred mammals in world, though it tends to be more of an olive than green. Very distinctive pair of cream patches underneath eyes, and another pair underneath ears, as well as dark and lighter ‘racing’ stripes down back. Unusual as does not build a drey to roost in, but sleeps out in open during day, greenish fur making animal hard to spot in canopy. Like most of other possums in Australian tropical rainforest, generally restricted to the higher altitudes, although this species is also common at mid altitudes around Yungaburra, and is occasionally reported in the lowlands. Found only in North-east Queensland. 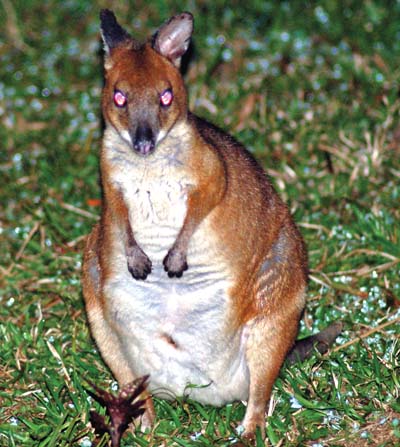 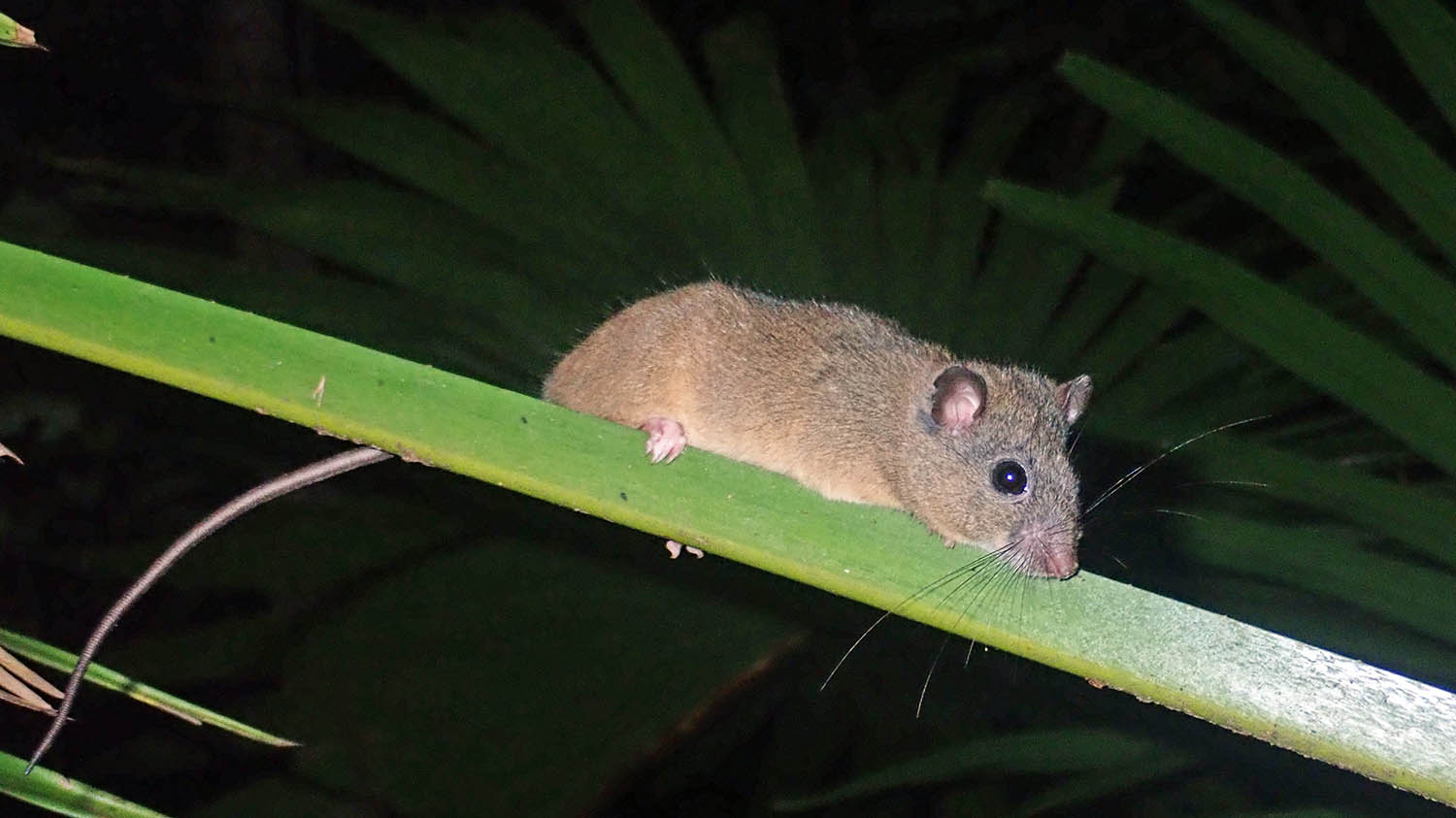 One of the more common and noisy mammals around rainforest in Australia and New Guinea are the flying fox or fruit bats. They often roost in large colonies around areas of human habitation, even in trees in busy urban areas. On the nearby islands of the south-west Pacific region, they are often the only native mammal. 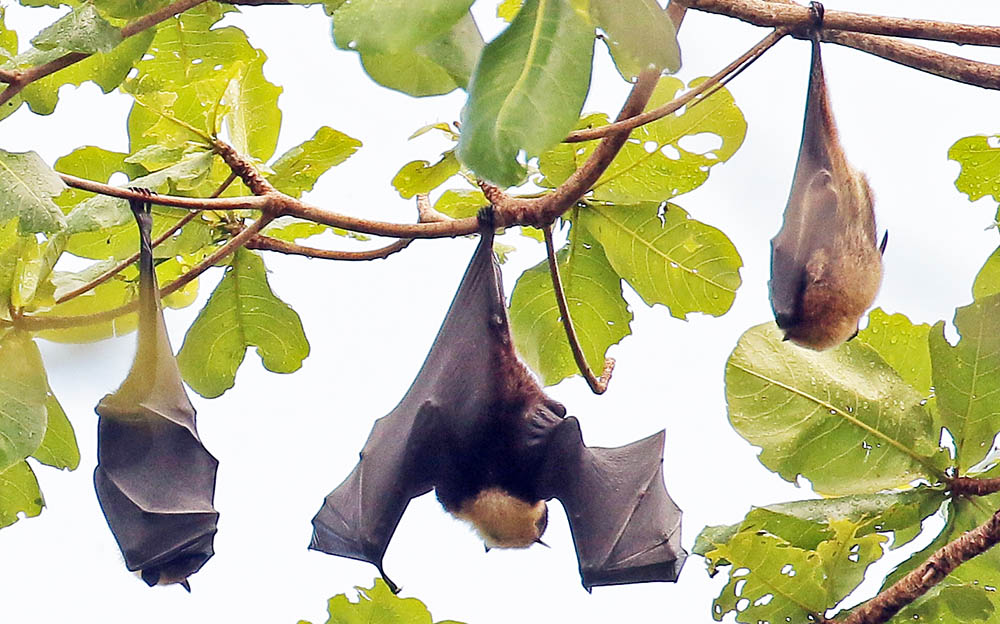 Pteropus tonganus , 'Insular/Pacific Flying Fox'. Large typical flying fox. Found in rainforest, mangroves and around human habitation. It is the most geographically widespread of all the flying fox in the Pacific; being recorded in New Guinea, Solomon Islands, Samoa, Tonga, Cook Islands, Tuvalu, Tokelau, Niue, Vanuatu, New Caledonia, Wallis & Futuna and Fiji. The other common flying fox found in Fiji that this could be is Pteropus samoensis.

For a short guided walk looking for the mammals in:
the canopy of the highland rainforest of north-east Queensland, Australia