The name ‘bug’ is often used to describe insects (and sometimes other creepy-crawlies), but the word ‘bug’ should really only be used for one group of insects, the sapsuckers of the order Hemiptera. This is only one order in a class of two dozen other orders that comprise one of the most diverse groups of organisms in the world. They range in size and shape from giant, thin stick insects to tiny round beetles. More than a million species have been identified and there are many more to be discovered. In Australia, over 85,000 species have so far been described, and it is thought that there is at least an equal amount yet to be named. 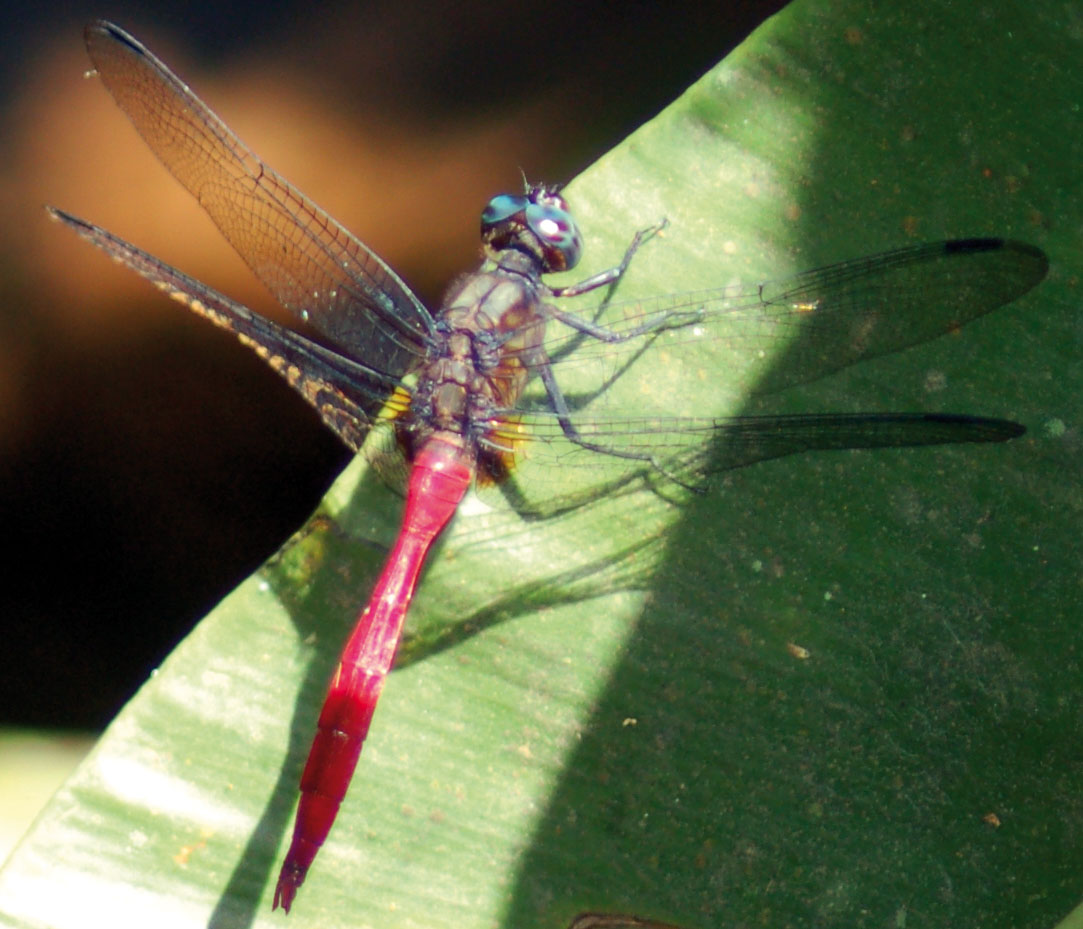 This order is considered one of the oldest of all insect groups. A now extinct type of dragonfly was the largest and heaviest insect to have ever flown, with a wingspan of over 70 centimetres. The Dragonflies and Damselflies are both long-bodied insects with two sets of long, delicate-veined wings, and they are often beautifully coloured. They tend to perch on low vegetation near water, where they occasionally fly off to predate on another insect. Male dragonflies and damselflies have two small projections at the end of their abdomens called claspers, while females tend to have a swelling at their end. When they mate the use their claspers to grab each other in an unusual ‘wheel’ position. Most species have aquatic, predatory larvae. Despite the sometimes slightly fearsome appearance of the adults and the hideous appearance of the juveniles, they are completely incapable of harming humans.

In contrast to the introduced cockroaches, many native cockroaches are not quite so disgusting, and in fact many are quite attractive. Cockroaches are usually fairly subtle creatures, coloured in browns to avoid detection. They are dorso-ventrally flattened, and the ‘neck’ of the insect (called the pronotum) is enlarged in cockroaches to form a broad shield protecting part of the body and the head. The legs are spined and adapted for fast scurrying. Unlike the more omnivorous house cockroaches, many native species mostly feed on dead vegetation, such as rotting logs, fallen leaves, and other detritus in the rainforest. 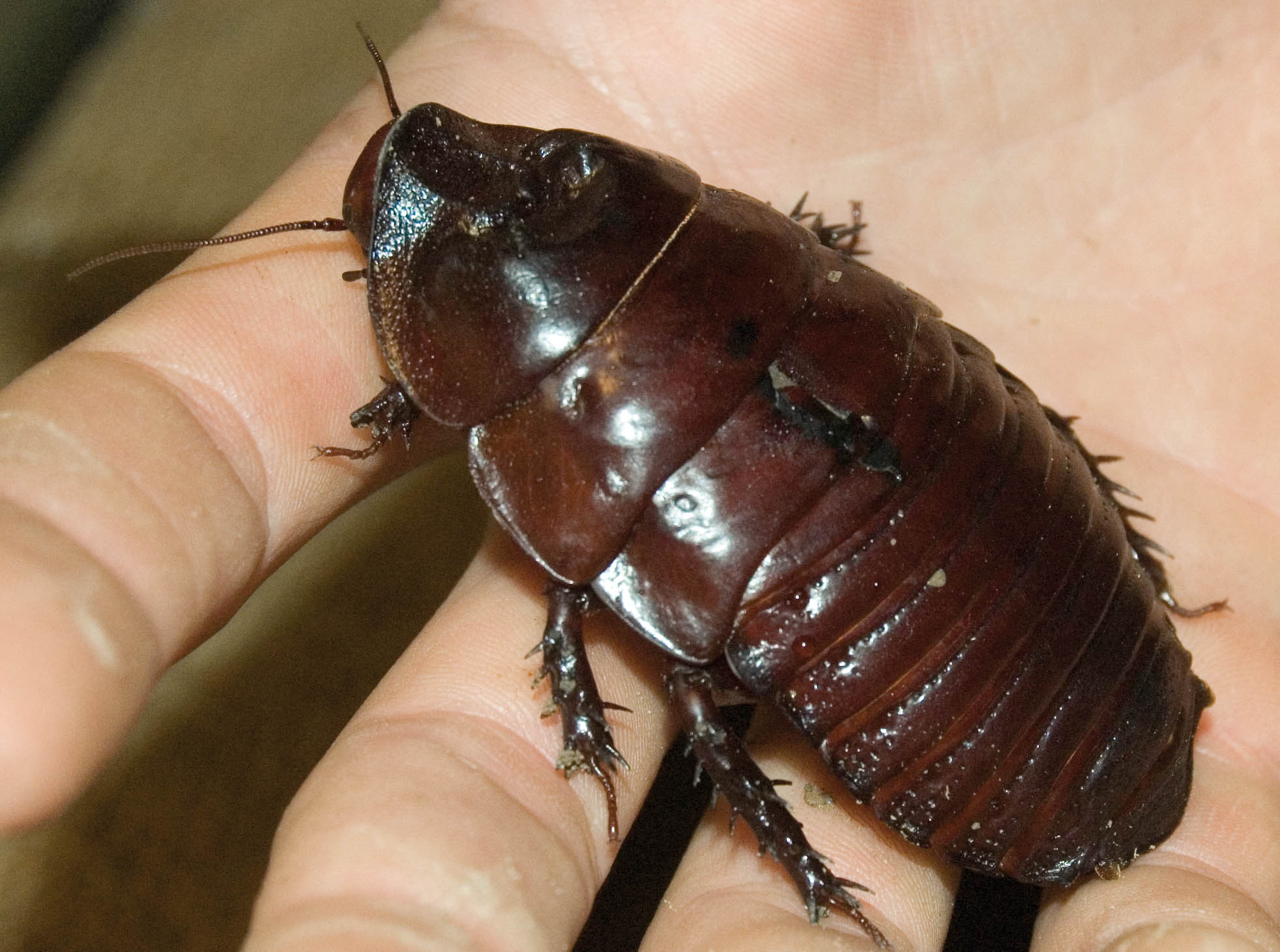 Macropanesthia rhinoceros, ‘Giant Burrowing Cockroach’. The heaviest cockroach in the world. Wingless. Female feeds young on dead leaves dragged down into underground tunnels where it generally lives. Adults may emerge after heavy rain. Sold as a pet. Found in drier rainforest and woodlands; endemic to north-east Queensland. 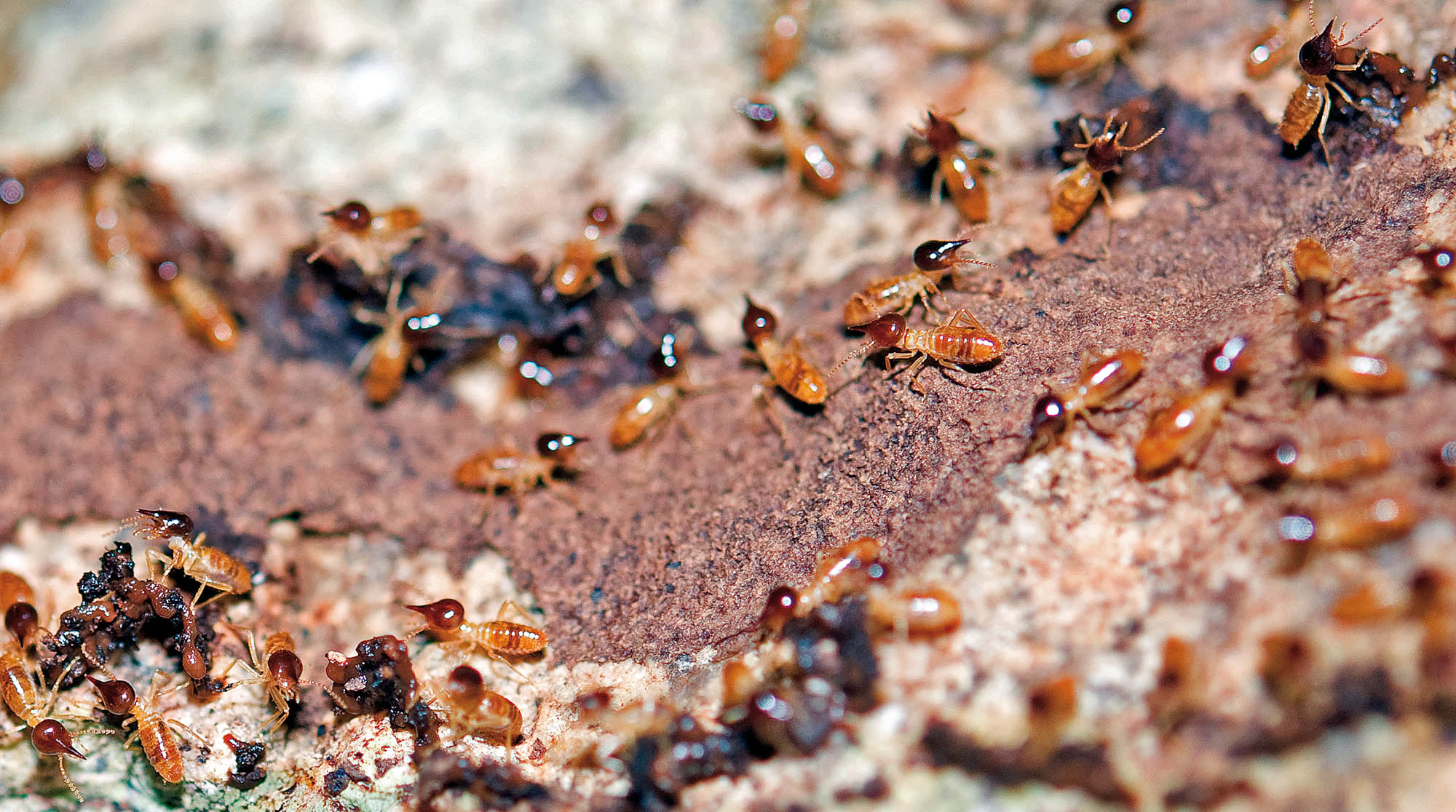 While termites are often called ‘white ants’ and do superficially resemble ants, they are in fact not at all closely related. Their order is considered much more primitive than ants, but they have evolved a complex colonial ‘caste’ system similar in some respects to ants, with specialized ‘worker’ and ‘soldier’ individuals. Termites feed primarily on cellulose in dead vegetation and are thus acknowledged to be important recyclers in the rainforest.

The insects of this order are well known for their quick springing and jumping abilities, a skill possible due to the incredibly long legs that are bent back and to the side of the body. These legs are also involved in sound production; they are rubbed to create the sometimes very loud noises that males make to attract females. This is also a group of ecological and economic importance, as they constitute some of the most dominant grazers in many ecosystems and are among the more serious crop pests around the world, such as some locusts.
Like many common names cricket and grasshopper mean different things in different places. Generally, the crickets tend to be nocturnal, have long antennae and females have an extension to the back of their body which is stuck into soil to lay eggs (ovipositor). In contrast, grasshoppers tend to be diurnal, have short antennae and females lack the ovipositor. Generally, the nocturnal crickets are duller coloured, while the diurnal grasshoppers can be brighter colours; however, in the tropical rainforest crickets are often colourful bright greens.

This is generally considered the most primitive family and also includes the largest crickets of them of all, the ‘Wettas’ of New Zealand. They are usually seen at night at wetter times of the year.The genera of Papuaistis and Penvalva include the ‘Giant Forest Crickets’, and are some of the most striking of Crickets. Some species have white patches where the legs bend, and are thus commonly known as ‘White-kneed Crickets’ (Penalva flavocalceata is pictured). They are large brown crickets with very long antennae and when disturbed hop about in every direction (usually landing on the person who is most scared of them)

This group includes many of the classic rainforest crickets and katydids. It is more diverse the further north you go north and into New Guinea. The most common and obvious members are the ‘spiny crickets’ of the genus Phricta spp. They occur in forests along the east coast of Australia from NSW north, and are found on vegetation. Some of the tropical species can be large, have rainforest lichen camouflage colours, and be elaborately spiny, and are thus sometimes called ‘Wait-a-while crickets’. When disturbed, they are reported to turn around with their rear towards the threat and flick their spiny legs out as a defence. Generally, however, they are harmless leaf eaters. 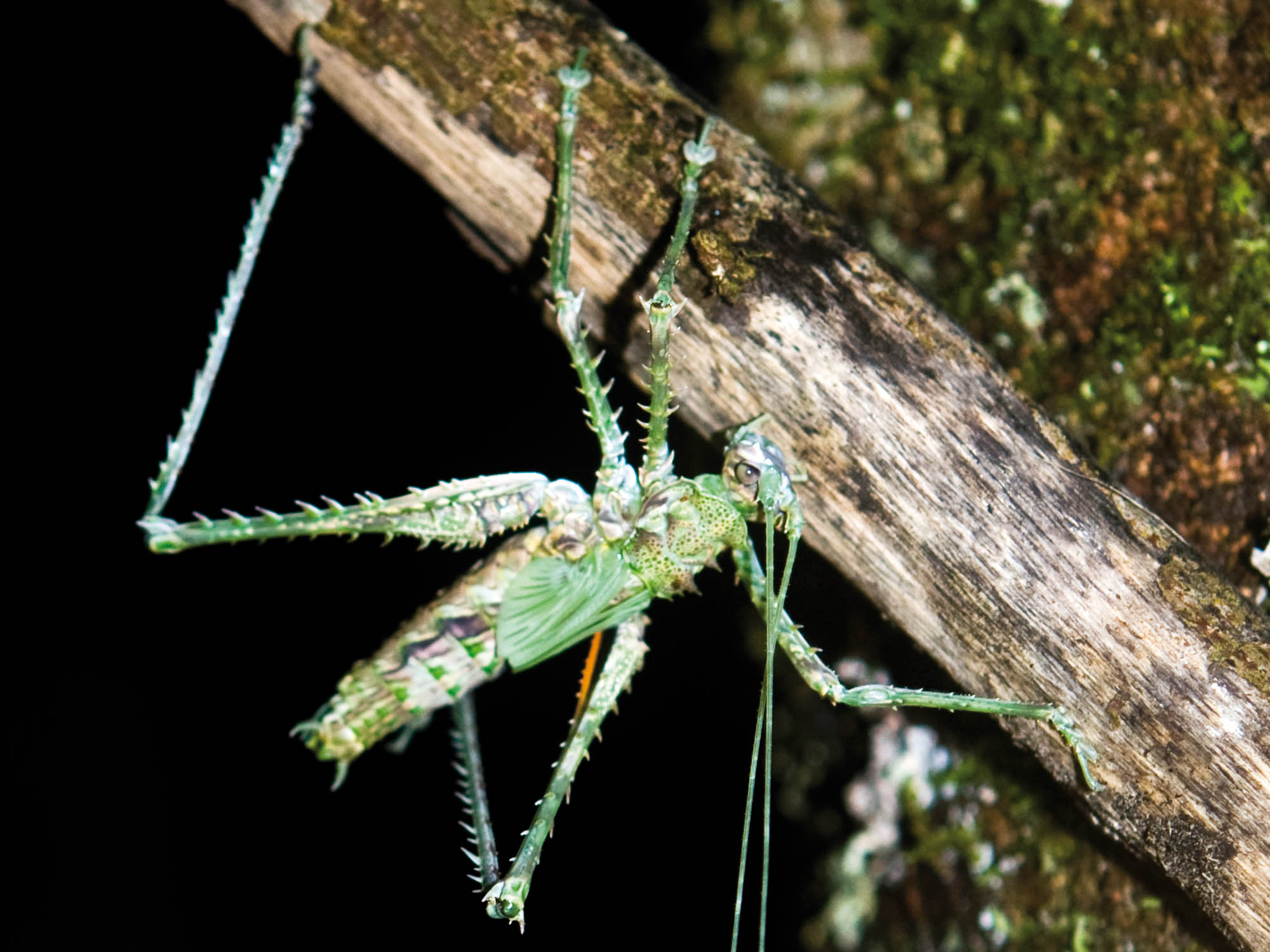 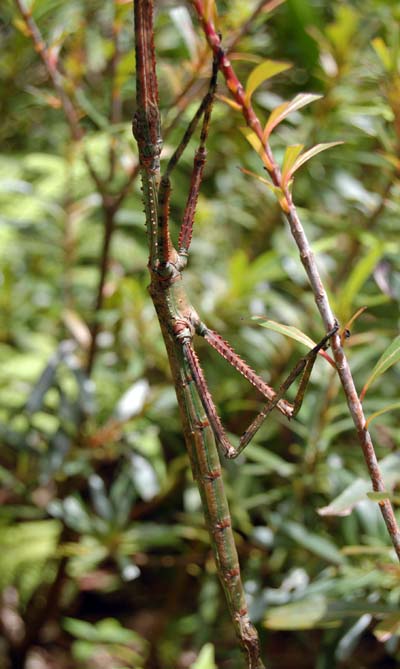 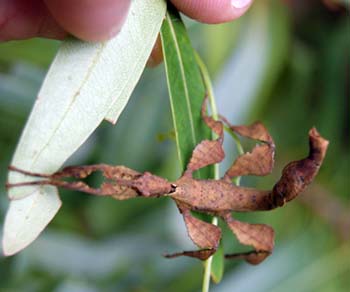 the leaf like camouflage of juvenile insects in the rainforest 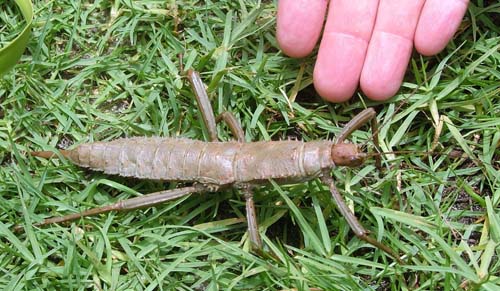 The name ‘bug’ is often used in common usage to talk about many different ‘creepy crawlies’. However the name ‘bug’ actually refers to a specific order of insects. Bugs tend to be rounded in shape with hardened forewings that often fit back over the body rather like a shield. They differ from the superficially similar beetles by their usually shorter antennae and the presence of a pointed mouthpart. Most species use this to suck sap from plants, or predate on other insects.

The biggest bugs likely to be commonly encountered in the Australian rainforests are the cicadas. They are most obvious when the males are calling for females while perched on plants. They do not rub their legs as the crickets and grasshoppers do, but have an organ called a tympanum on their side of the body that they flex in; when this pops out it makes a sound. The cicada does this so rapidly that it creates what to our ears sounds like a continuous drone.

Adults are short-lived, surviving for only between a few days and a few weeks, depending on the species. In this time they mate several times and the females lays her eggs into vegetation. Safe underground, the nymphs use their pointed rostrum to pierce roots and suck up the sap from plants. It is unknown how long most Australian species spend doing this, but it is estimated from at least a couple of years to as long as 6-7 years, depending on the species.

Most of the 200 species found in Australia are found nowhere else, and the highest diversity of species on the continent is in north-east Queensland. On a summer’s day in the coastal lowlands, the calling of male cicadas can be deafening. At the peak of their mating when there may be hundreds of individuals flying about, they can be easy to see as they cover tree trunks and fly into people and buildings. However, for most of their time in the rainforest they can be difficult to spot.

The ‘Whirligig’ Beetles comprise their own family, with hundreds of species found whirling about in circles on the surface of the quieter waters all around the world. They are in fact looking for dead insects or ones that are trapped in the surface tension of the water. Their eyes are like bifocals, for they are divided into two segments for looking above the water and below the surface simultaneously. They can be seen in the quieter parts of creeks in the lowland forests, and often end up in the swimming pools of some of the rainforest lodges.

This large family has over 1200 species. They can be long, large beetles, with thick, long antennae. The larvae are large white grubs that live and chew inside decaying wood, and they are a favoured food for various indigenous people around the world. The ability to chew on wood is due to the heavy mandibles, so this is a good reason to be careful of their bite. 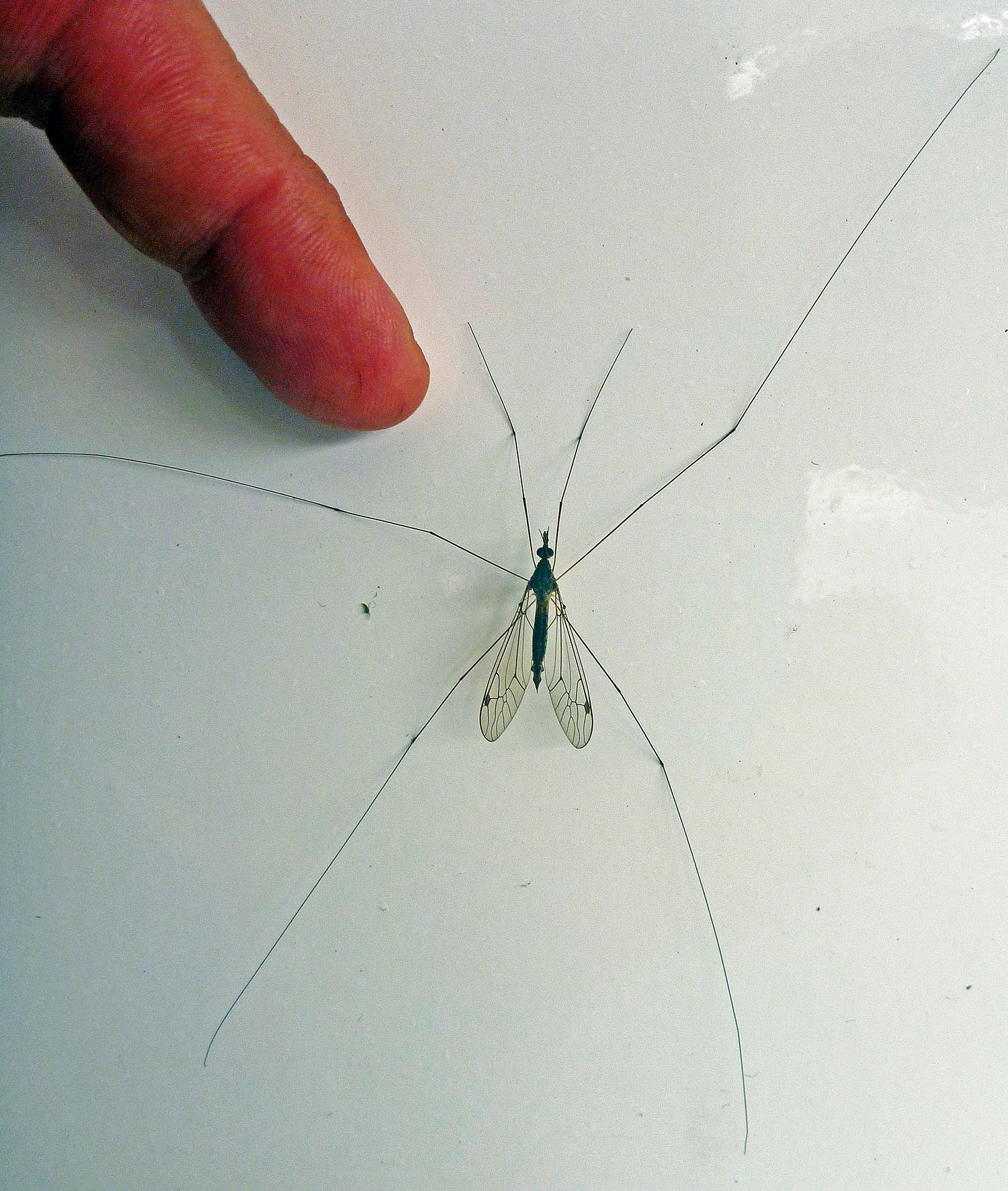 (Crane Fly with my finger for scale) 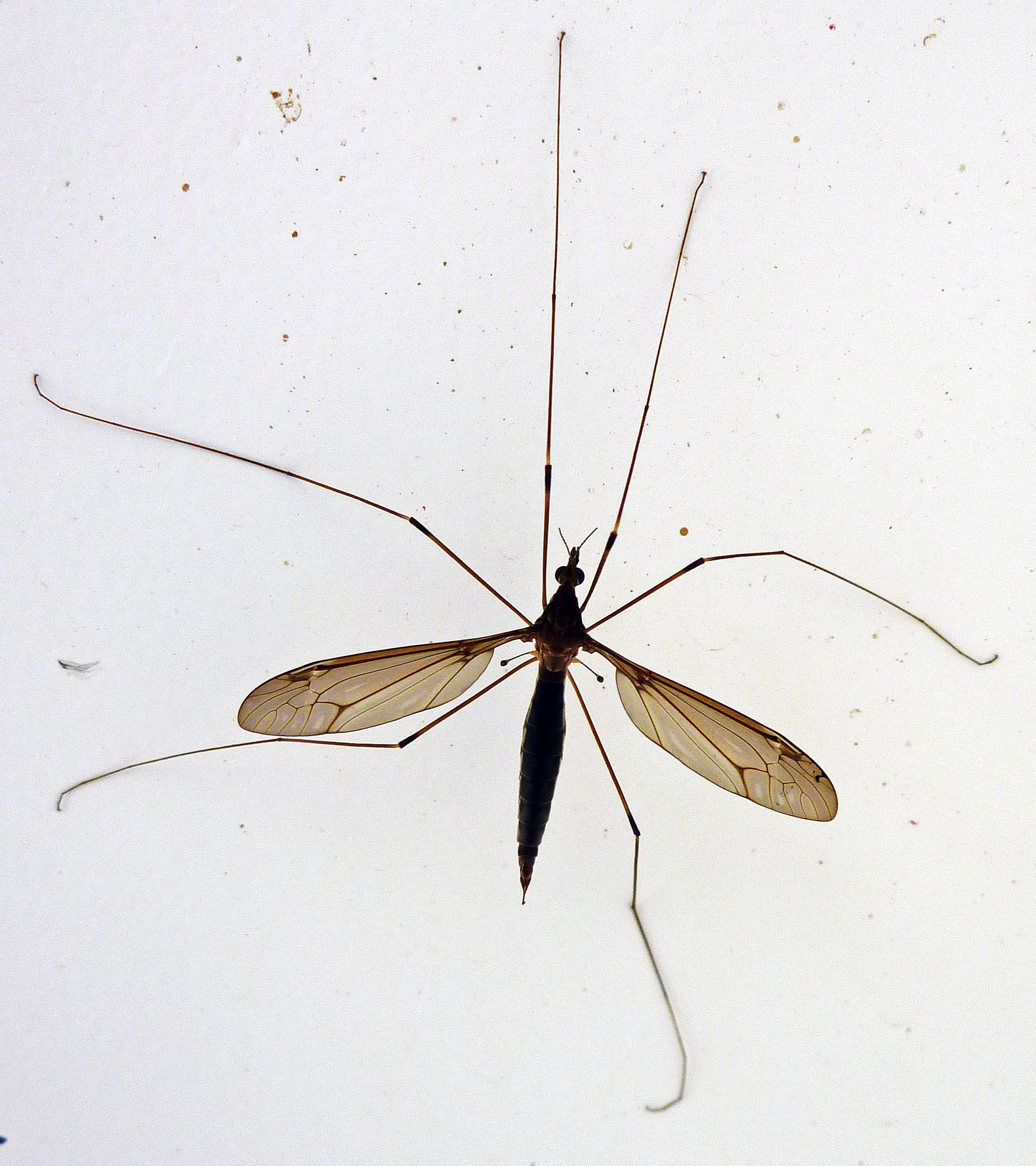 There are thought to be over 1500 species of Craneflies. They can be large insects, resembling a giant clumsy mosquito. They have long thin legs that are delicate and easily damaged. Despite their size, they are not commonly seen, mainly due to their short adult life span, which may only be a few weeks. Despite their intimidating appearance they are harmless and indeed quite frail. They do not bite and many species do not even feed during their short adult life. Unlike most insects there are just as many (if not more) species in temperate areas (such as Eurasia) than in tropical areas. 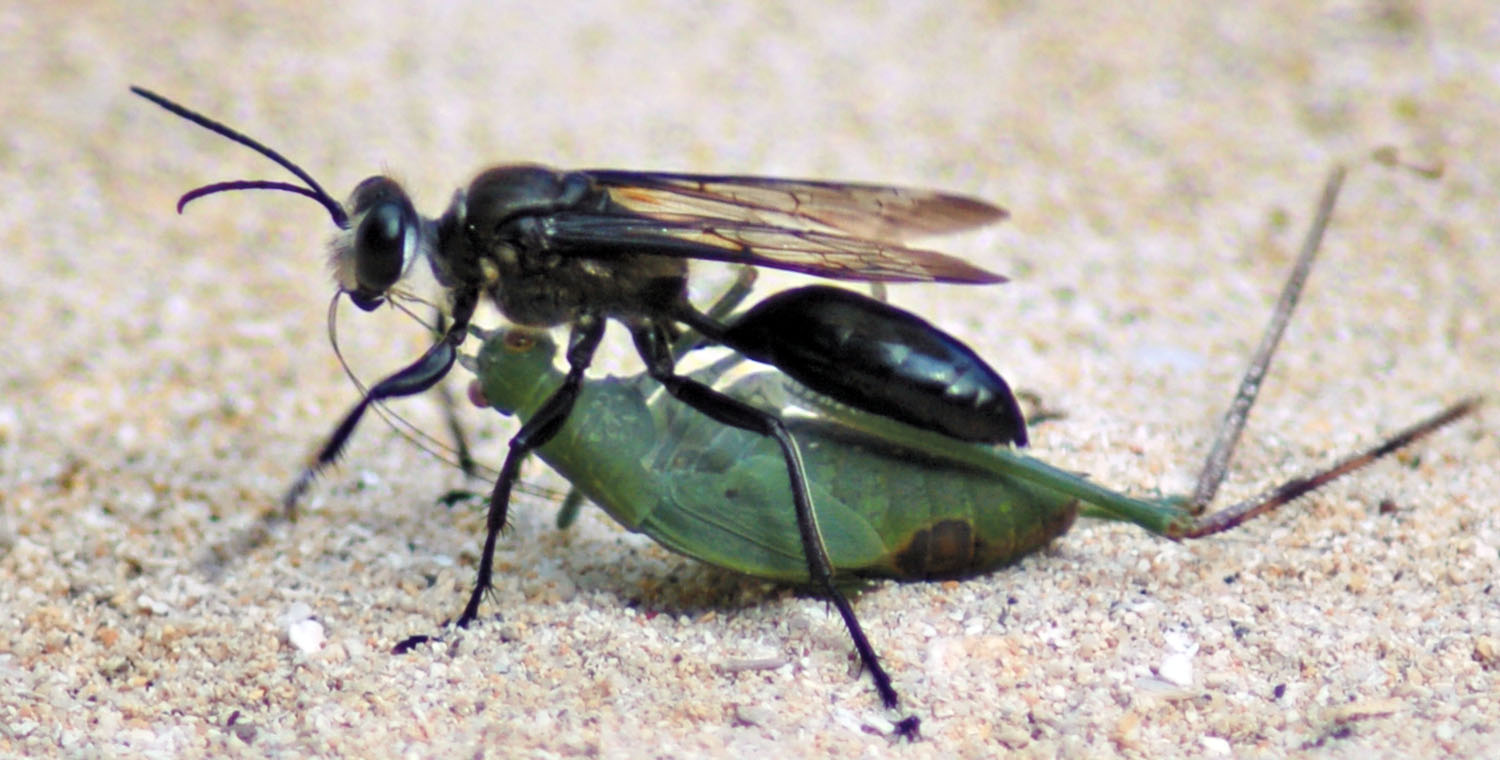 There are many different families of wasps represented by species in the Australasian tropical rainforest, from the tiny fig wasps to the bright metallic green cuckoo wasps. Adults of many species are known for their highly predatory nature.

This large group contains some 16,000 species over 7 different families. Most species feed on nectar and pollen, and they have evolved hairs on the body and a basket on one of the hindlegs or the abdomen to collect this food. Although the better known bees live in colonies, most species are solitary. Most of the native bees in the tropical rainforest are small and stingless. 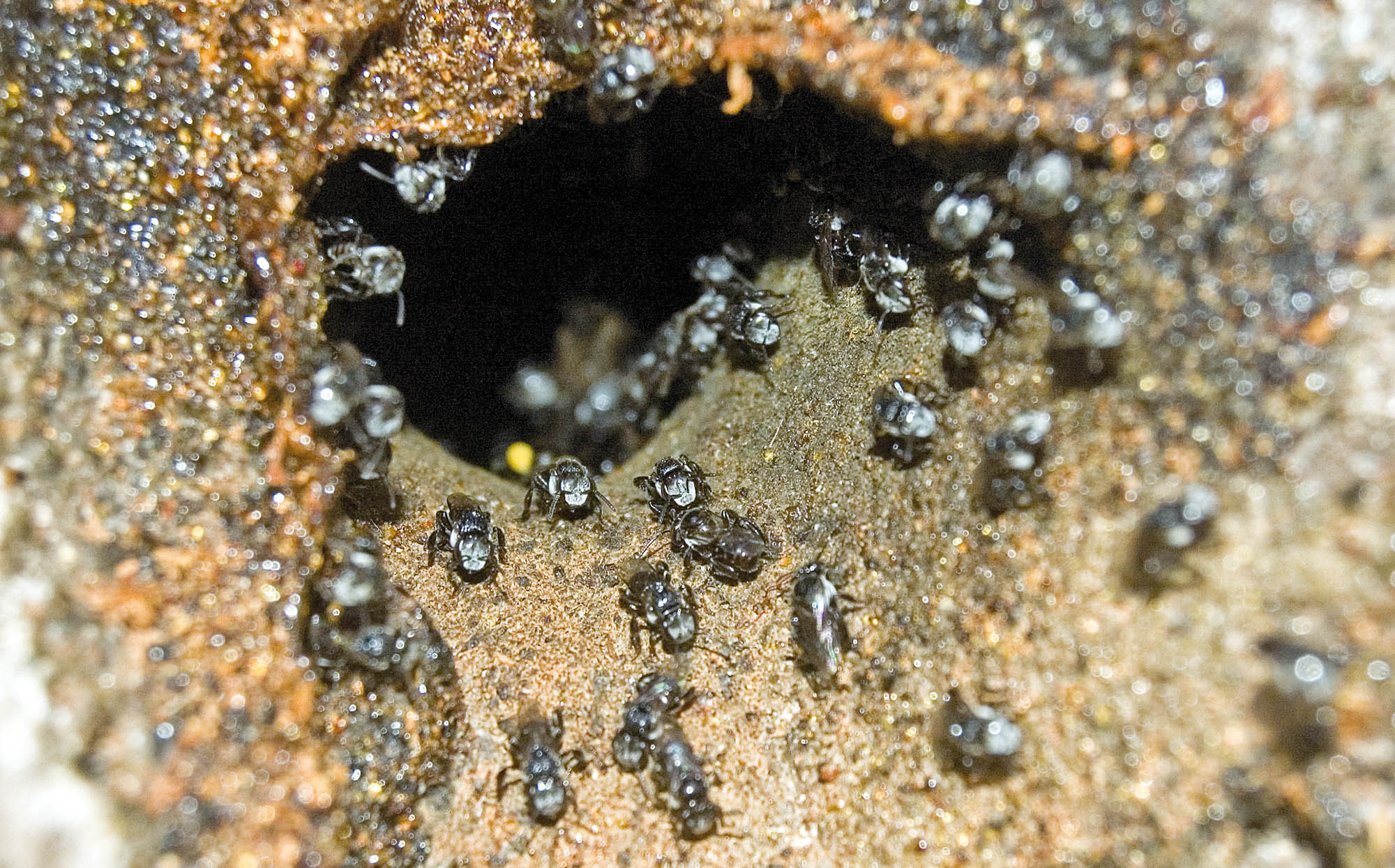 This family is found in the rainforests and woodlands of the tropical Americas, Asia and Australia. The trigonid bees are small, dark bees that resemble flies. They can sometimes have the annoying habit of hovering around humans to drink the sweat off our bodies, and thus one of their common names is Australia is ‘sweat bees’ (this common name is used for different types of bees in North America). They usually make wax nests in tree hollows, and in the rainforest and on the edge these nests can sometimes be seen on outside wooden picnic tables and buildings.

Ants have to be one of the most diverse, interesting and ecologically important families of animals in the world. They are of course found all over the globe, with the greatest diversity in the tropics. The family is split into several different sub-families. Australia has over 4000 species.

Ants have highly evolved social structures, with individuals developing into different ‘castes’ that have different functions, such as workers or soldiers. Generally, the regularly visible ants such as these soldiers and workers are sterile females. The winged flying males only appear during the times of reproduction and establishing new nests. Studies in the last few decades have revealed the efficiency of their communication through the use of pheromones.

Most adult ants actually feed on liquid foods such as nectar and fruit juice. The mandibles seen in adult ants are for defence and tearing apart food. The food that we often see adult ants carrying is usually being taken back to the larval ants, who are in the form of tiny grubs, and much more predaceous than the adults.

For the page on the butterflies & moths of the Australasian rainforest