There are various obvious structural features of the tropical rainforest. For example, it has a multi-layered canopy, which consists of an effectively complete top layer, while below there may be many different levels or strata of plants. The very bottom floor of undisturbed rainforest is relatively open with little undergrowth such as grasses. Another distinctive feature is the amount and variety of plants growing on other plants, such as vines and epiphytes growing in the canopy. 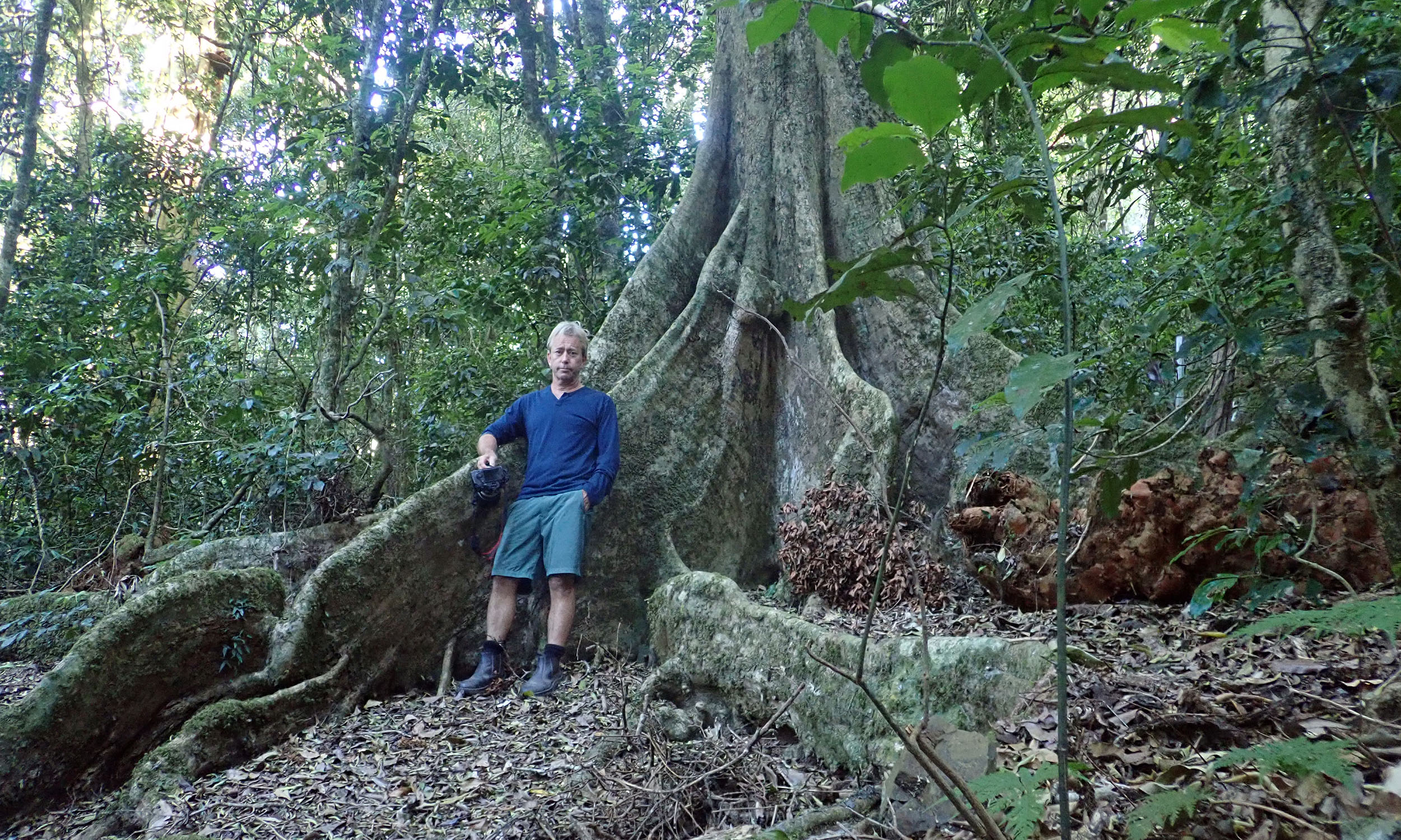 (the author at O'Reillys)

There are also more specific features of the organisms that live within the rainforest. For example, tropical rainforest leaves often look very similar despite growing on unrelated plants; they are usually leathery, a nice glossy green, and many possess the distinctive ‘drip tip’. Many tropical rainforest trees develop features that are rare outside the rainforest; they may flower and fruit on the branches and/or the trunk (ramiflory and cauliflory), and the roots of many trees spread out as much hori- zontally as they do vertically, developing into ‘buttress’ or ‘plank roots’.

The biggest areas of ecological interaction involve the relationships between plants and animals. One of the most obvious of these is the act of the animal eating part or all of the plant. Some of this feeding is actually part of the plants’ ‘strategy’; for example, animals feed on the nectar produced by flowers, or on the fleshy fruits grown around seeds. However, many animals actually consume the plant itself. The eating of plants by animals is called herbivory.

Herbivory is one of the most basic and important relationships in nature. Herbivorous insects alone represent almost a third of all living species. In natural ecosystems roughly 10% of all plant resources are lost to herbivory. If one looks around the forest, it is difficult to find a leaf that has not been effected in some way by an animal. Herbivory is an ancient relationship, and its long history has important evolutionary implications. It is sometimes likened to an age old, continuous war. It is often suggested that this ‘arms race’ between the animals eating plants, and the plants trying to avoid being eaten by animals, may have contributed in a large part to the high diversity of flowering plants and insects that we see today. The war of herbivory can be seen from either side; the animals and their attempts at digesting plants, or plants and their ways of avoiding getting eaten by animals. 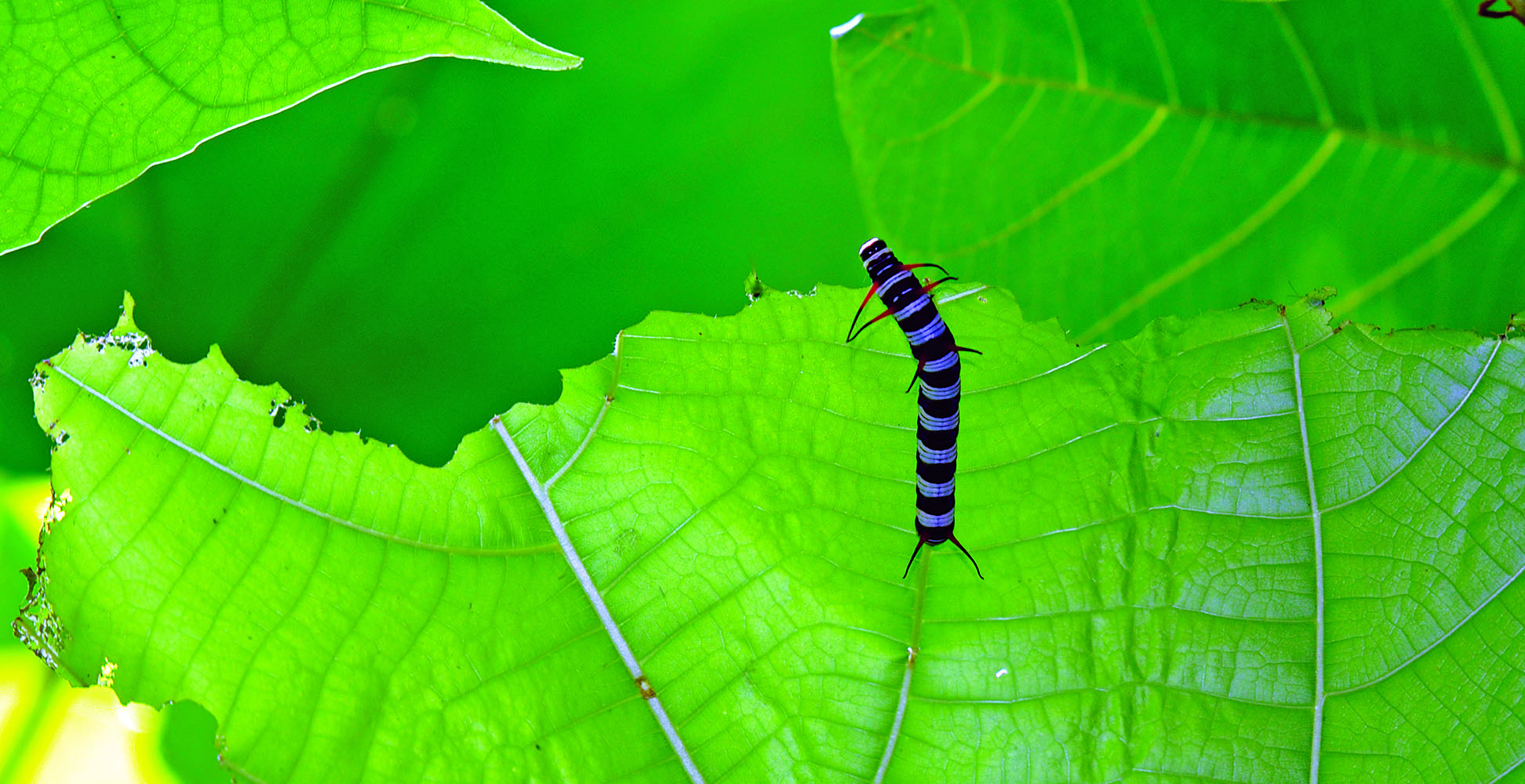 Herbivores can be any sort of animal, from the biggest land mammals on earth (elephants), to some of the smallest insects (termites). Herbivory by larger animals is not as important or obvious in the rainforest as it is in the adjacent savanna woodlands. In the tropical rainforest it is the constant attack on plants by the smaller insects that really constitute the major battles of herbivory.

Browsers in the tropical rainforest include various species of possums, with the Ringtails in particular being mainly foliovores; they are the equivalent to leaf eating monkeys in tropical Asia, and sloths in the Americas. And like their equivalents, these possums need to digest their cellulose heavy foods, and are thus fairly lethargic animals.

Within these groups there are different herbivorous strategies. ‘Generalists’ feed on a wide range of species, while ‘specialists’ concentrate on specific types of plants. Generalists can choose from a wider range of food and therefore can adapt to changes in habitat. However, those animals that specialize on particular plants, (such as most butterfly and moth caterpillars that usually feed on a small range of often related plants), are usually capable of processing nutrients much more efficiently than generalists.