I first visited this wetland in November of 2016.

There are lots of birds to be seen here in the morning, and it is a good place to start your Sri Lankan birdwatching, by getting to know some of the more common and widespread species, such as Green Imperial Pigeon, Black-hooded Oriole, and White-throated Kingfisher, as well as those common birds that hang in gangs in Sri Lankan woodlands, with the psycho blue eyes, the Yellow-billed Babblers. And being a wetland, there are obviously some freshwater birds to be seen such as Purple Swamphen, Red-wattled Lapwings and White-breasted Waterhen.

There are also other creatures living in and around the water. Asian water Monitors are common even in big cities in tropical Asia, and this place is no exception. And if you are lucky, you might spot the local troop of Purple-faced Leaf Monkeys, a primate endemic to Sri Lanka.

This area is significant for having wildlife so close to the capital city. It is relatively easy to get to. You can hire a tuk-tuk, or better yet, a taxi, to drive from your Colombo hotel to the wetlands. It takes about 30 minutes if you do it in the early morning before the traffic starts. If you are in morning peak hour, it might take over an hour. It's location is on google maps. 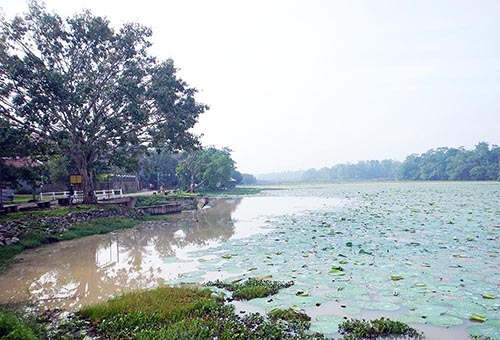 For the page on Asian freshwater habitats