The Lepidoptera moths and butterflies of the tropical Australasian rainforest....

Butterflies and moths around the world reach their highest diversity in the warm and wet lowland rainforest, and it is no different in Australia. Of the over 400 species of butterflies found in Australia, nearly half of them are associated with the various types of rainforest in the northern and eastern parts of the continent, with the lowland rainforests of North Queensland and Cape York Peninsula generally considered the areas of highest diversity for butterflies. Not only are the tropical rainforests good for diversity, but the species here include some of the most spectacular moths and colourful butterflies. Although New Guinea is not as well surveyed it is presumed to even more diverse. They are especially active in the hotter and wetter times of the year.

Members of the family Geometridae begin life as larvae that we call ‘inchworms’ or ‘looper caterpillars’, named because of the distinctive way they travel. They later develop into many of the small and medium sized moths that lay flat against trunks in the Australian tropical rainforest and most other parts of the world. They are often coloured in browns or greens (‘emerald moths’) to blend in with the tree trunks and the lichen.

This family contains about 700 species throughout the world, with 36 of them recorded so far in Australia. The subfamily Uraniinae includes some of the most spectacular, including many large and colourful day-flying moths in the rainforests of Asia, New Guinea and Australia. 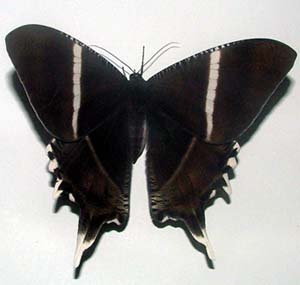 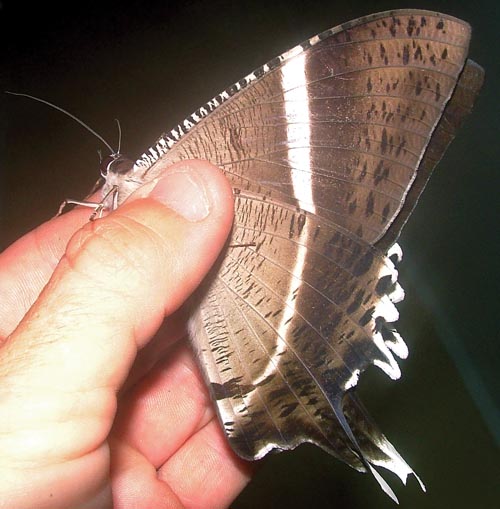 Lyssa Moth (Sepik River, Papua New Guinea). These stunning moths are swallowtail in shape and size and are strikingly marked in black, dark brown and white. They fly at night around rainforest, from Australia to tropical Asia

The hawk moths are found all over the world, including over 65 species in Australia and, as with most Lepidoptera, there are more species in the tropics. They are often large moths with thick bodies, and are distinctively shaped like a jet fighter; this is presumably more aerodynamic than many other moths. The species in this family have a distinctive larval stage; the caterpillar has a large spine sticking out from the rear of the body, are often colourful, and have false eye spots. As an adult moth they have a large and obvious feeding proboscis, which they use to poke into relatively deep flowers, hovering as they take the nectar. 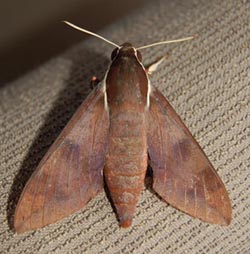 Gnathothlibus spp. 'Hawk Moth'. Llarge, handsome brown moths with distinctive white lines along the side of the body, and the larvae feed mainly on grape vines from the family Vitaceae.

This family has about 1500 species around the world, however only 15 of these are found in Australia. The family includes many spectacular types, including the ‘Emperor moths’. Most species in the family are large, and the body is usually thick and hairy. The large wings usually have a triangular ‘window’, where the scales are transparent, and the tip of the forewings bend out. The antennae are distinct; they are held out back behind the head, and have many small projections off either side along their length. 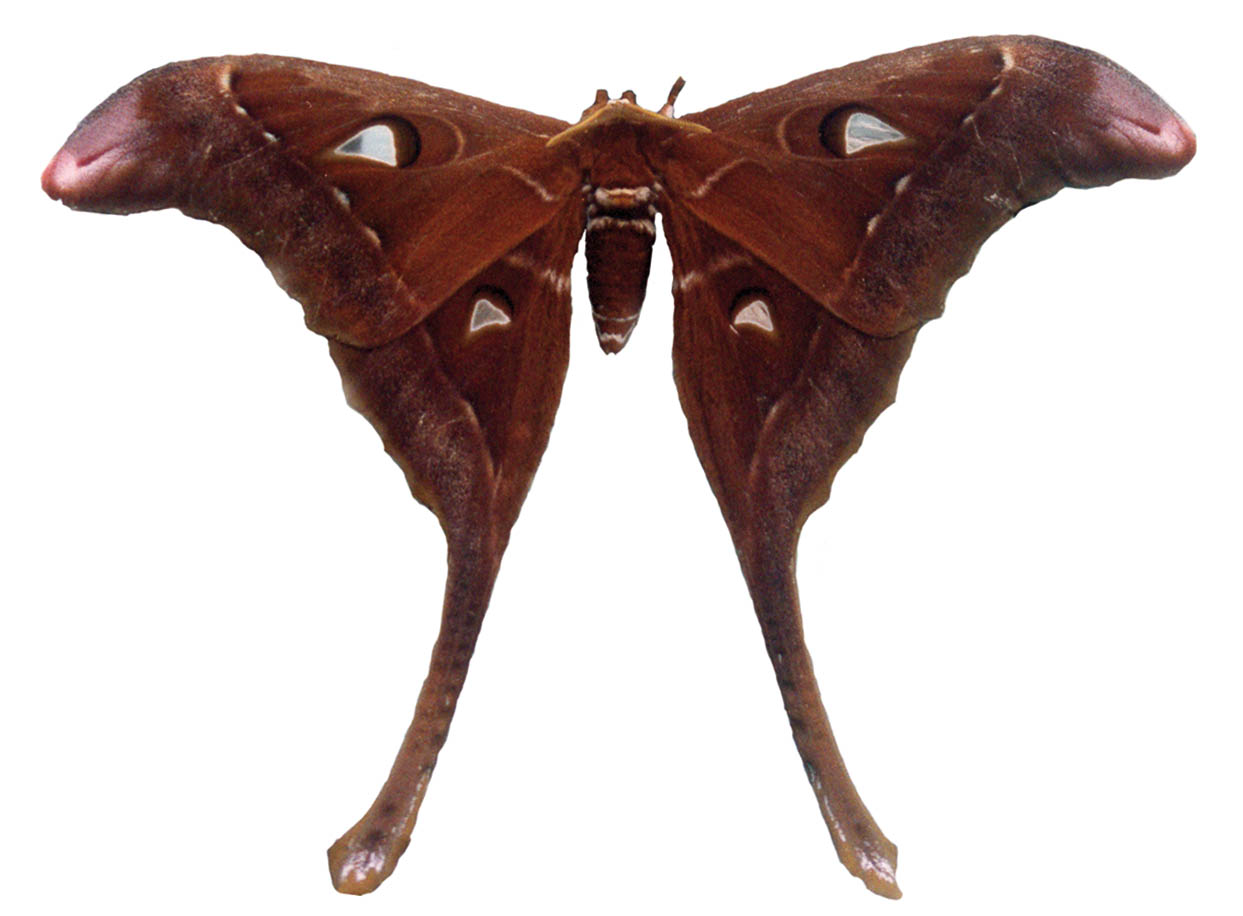 Coscinocera hercules, 'Hercules Moth'. Biggest moth of the Australian tropical rainforest, indeed on the whole continent. Further, this species and tropical Asian ‘Atlas moth’ compete for biggest moths in the world, if measured by wing area. Colours are various shades of leaf browns with (as with many species in this family) small ‘windows’ in wings. Males have long ‘tails’ off the wings (pictured above). The large caterpillars feed off leaves of some rainforest pioneers including Bleeding Heart and Celerywood. Adults are very short lived, generally seen in the wetter months from January to April.

This family includes some of the bigger and prettier butterflies of the Australian tropical rainforest. The common colour pattern is a background of black with smaller patches of brighter red, green, blue or white. Most species are large, and many have elaborate tails off the wings

Some of the species in this genus are known as the ‘orchard butterflies’ as their caterpillars have been found on cultivated citrus plants. In their natural habitat in the rainforest they live on the other species in the citrus family, the Rutaceae.

Birdwings are centred mainly in New Guinea, where the group includes species that are the largest of all butterflies. They are also found north into tropical Asia and south into tropical and subtropical Australia, where 3 species are found in the rainforests along the east coast. Birdwings frequently glide and are often high up in the canopy. The 3 species found in Australia have bright green and yellow males, with the larger females being a less colourful black and white with some yellow. The larvae of the Australian species all feed on leaves of various Aristolochid vines. At some flowering plants, larger individual birdwings are larger than native birds such as sunbirds and myzomela honeyeaters. The 3 species found in Australia are geographically separated. 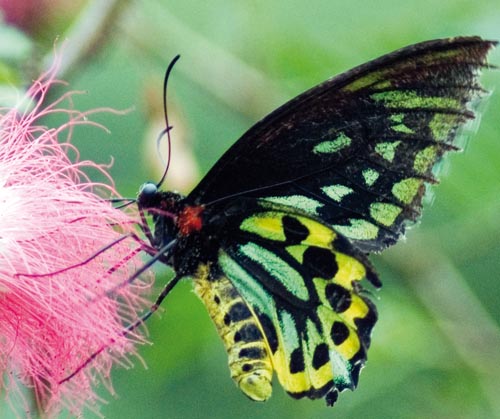 This family has over 80 species in Australia. It is a wide and varied group that is better viewed in the different subfamilies. 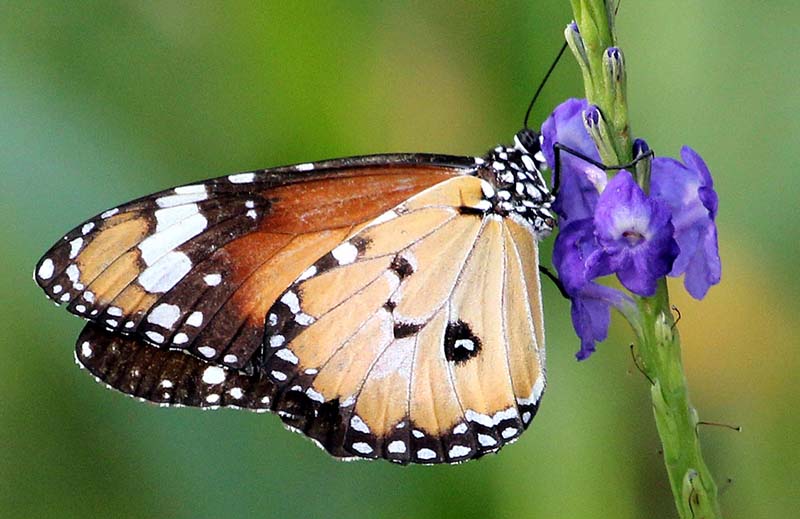 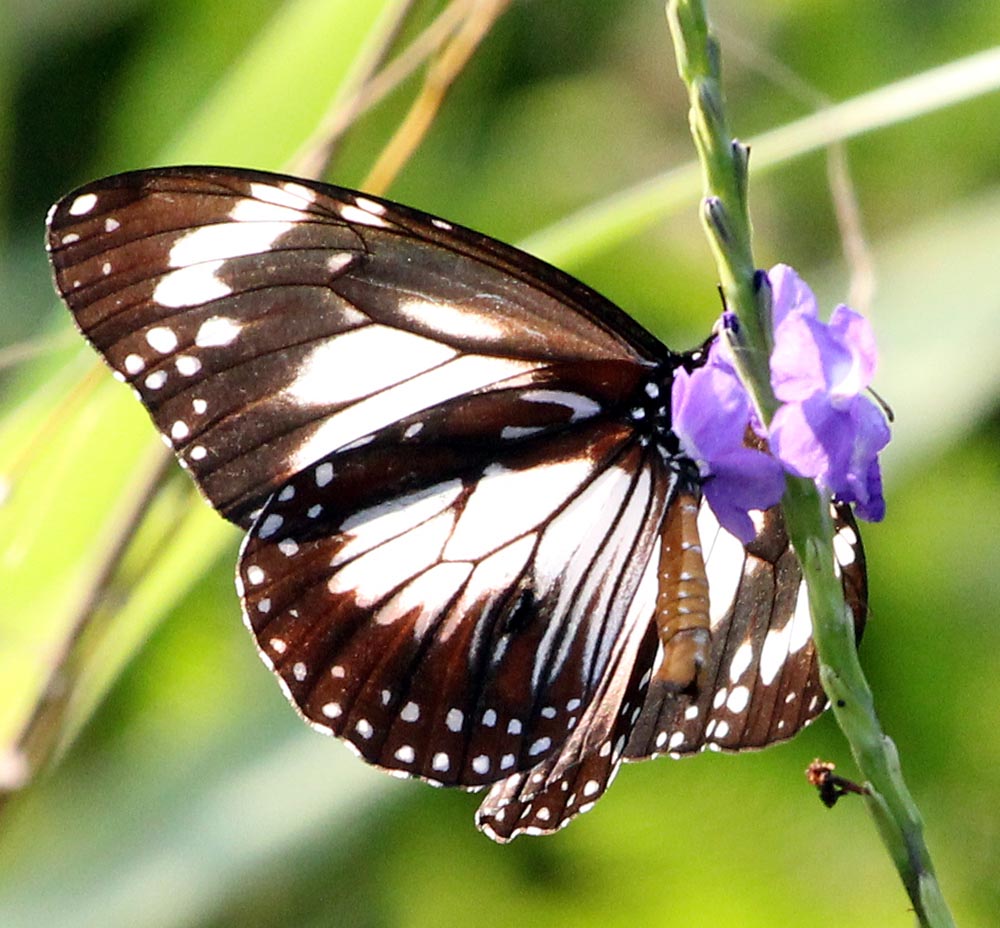 Danaus affinis, 'Malay Tiger', 'Swamp Tiger'. Interesting fact: this animal is not a tiger, but a butterfly. Found throughout tropical Asia, south to north-eastern Australia.

For the page on insects of Australasian rainforest